Hearthstone’s Warlock class has seen better days. While it’s historically boasted some of the strongest decks in the game (the Zoo and Handlock varieties have been powerful for much of Hearthstone’s lifetime), the most recent “Rise of Shadows” set failed to give the class good enough cards, and as a result, the class is struggling. Luckily, Warlock is getting a class-exclusive new card from the upcoming “Saviors of Uldum” expansion that might just change all that. 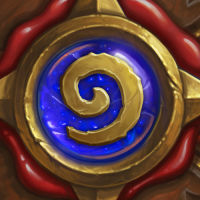 Hearthstone Card Of The Month

Every month, we take a close look at a card that’s been getting a lot of buzz — good or bad — in the world of competitive Hearthstone. 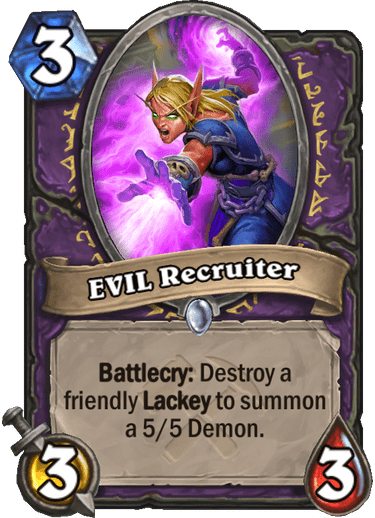 The card is called EVIL Recruiter, and it’s a 3-Mana minion with 3 Attack and 3 Health. But where the card really shines is in its Battlecry effect, which destroys a Lackey-type minion to spawn a 5/5 minion in its place. For those who haven’t played Hearthstone in a while, Lackeys are 1/1 minions with powerful Battlecries that largely defined the “Rise of Shadows” expansion, and since they only cost 1 Mana, that means you can play both a Lackey and EVIL Recruiter on turn 4 to create 8 Attack and 8 Health’s worth of stats.

This is a massive stat line to summon on turn four, and in the past, there was an infamous Shaman card called Flamewreathed Faceless that was a 4-Mana minion with 7 Attack and 7 Health. The card was so powerful that it made “4-Mana 7/7” a meme in the Hearthstone community for its power level — a meme that might just be replaced by “4-Mana 8/8” when talking about the sheer power level of EVIL Recruiter’s stat line. 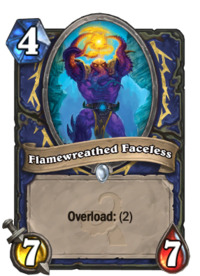 More interesting still is that EVIL Recruiter is often more powerful than a 4-Mana 8/8. Since Lackeys already have strong Battlecry effects, if you play the Lackey/Recruiter combo, you’re also triggering the Lackey effect, which can deal immediate damage, evolve one of your own minions into a stronger one, or give you a new spell to add to your hand.

The only way this thing might not become a staple of the Warlock class is if proves too difficult to generate consistent early Lackeys to trigger the effect. As of now, the only two options that the Warlock has to get Lackeys are through EVIL Cable Rat, a 2-Mana 1/1 minion that generates a single Lackey, and EVIL Genius, a 2-mana 2/2 Warlock minion that destroys a friendly minion to generate two Lackeys.

Even with just these two options for Lackey generation, Warlock has four ways to get Lackeys on turn two — but without a reliable third option, the elusive 4-Mana 8/8 might not be as easy to pull off as it seems. 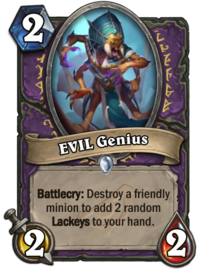 Still, this is a powerful card, and based on how bad the Warlock class is at the moment, it’ll only have a positive impact. To give you a better picture of how sad the current state of Warlock is: As of now, the top 3 Warlock decks according to Hearthstone stat-keeping site HSReplay.net account for just 3.4 per cent of the overall decks played in Hearthstone’s standard mode.

Usually, a single card isn’t enough to turn a class around when it’s struggling. But for Warlocks, an early EVIL Recruiter could be enough to take complete control of a game, snowballing a board lead into an aggressive victory that Warlocks simply didn’t have access to before. Is Warlock finally back? Maybe. All I know is: If you see a Warlock play a Lackey generator on turn two, you should probably be scared.