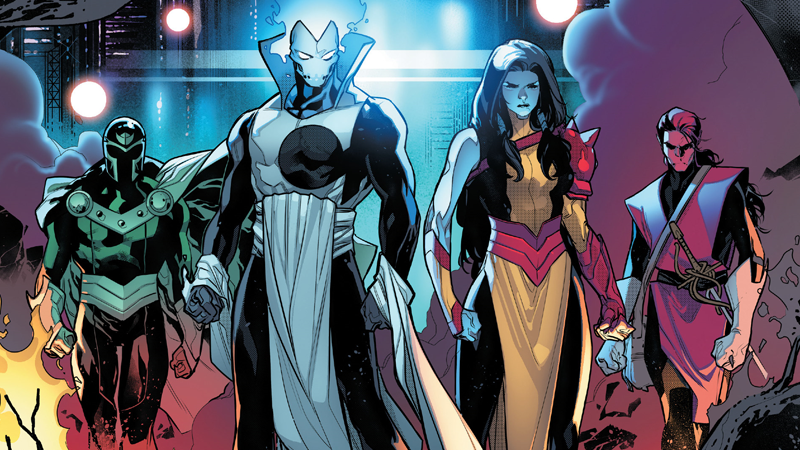 The X-Men of X² make their final stand. (Image: R.B. Silva, Adriano Di Benedetto and Marte Gracia, Marvel Comics)
To sign up for our daily newsletter covering the latest news, features and reviews, head HERE. For a running feed of all our stories, follow us on Twitter HERE. Or you can bookmark the Kotaku Australia homepage to visit whenever you need a news fix.

For the past two weeks, Marvel’s bold X-Men event series has taken a pause from its truly bonkers acts of revelation to spend a little time in the future. This week it seems that interlude came to an end with an act of sacrifice to ensure that the very intriguing plans of Moira MacTaggert can truly begin in earnest.

This week’s Powers of X #3 — by Jonathan Hickman, R.B. Silva, Adriano Di Benedetto, Marte Gracia, Clayton Cowles and Tom Muller — is, much like last week’s issue, primarily concerned with plot rather than the wider existentialist themes of House of X and Powers’ first issue.

Stripped of the parallels between Moira — in her tenth cycle of death and rebirth — of the X⁰ timeline and the future revelations of Nimrod and the Librarian’s audacious plan in the timeline of X³ on display last week, Powers of X #3 has more time to focus on the suicide mission Apocalypse has planned for his remaining handful of misfit, chimeric mutants.

Launching an assault on a Human-Machine ascendancy ritual, Rasputin and her team make a flashy distraction, so that Wolverine, Cypher and Apocalypse can raid Nimrod’s library and extract vital information about the Sentinel’s origins from his vast archives.

The mission, as we were told in Powers #2, is an ill-fated one. One by one, Rasputin and her team fall to the might of the Man-Machine Supremacy’s forces, each hollow moment of victory earned with mutant blood.

When Nimrod realises that his archives are being raided and takes to the field himself, even Apocalypse, ever proud and boastful of his eternal status, enters the fray, giving his life so that the mission can succeed.

It’s brief and brutal, a sharp moment of despair that feels all too familiar in mutant stories of endless war against the Sentinel threat. The sacrifice, the pain, the futility of it all is potent.

But as ever, the price is worth paying for the chance for mutantkind to survive, and as a wounded Logan flees the scene with Nimrod’s data in tow, they seemingly get it — when it’s revealed Logan is giving said information to none other than the ninth iteration of Moira X herself.

With the data embedded into Moira through a bizarre, techno-organic interface apparently designed by Apocalypse himself, she now knows how and when Nimrod was first brought online, heralding the dark future that we now know as X². For he is immortal, and has no end. (Image: Russell Dauterman, Matthew Wilson and Joe Sabino, Marvel Comics)

But for that information to actually be useful, more mutant blood has to be spilled. And not Logan’s. One more sacrifice has to be made: Moira herself, so she can start her life again with the burden of the knowledge Rasputin, Cardinal, Xorn and even Apocalypse died to get to her. Logan kills her.

With Moira’s ninth life at an end, so that her tenth — and potentially final — can begin, we have some answers. But the more questions get answered, the more unanswered ones sweep in to fill the void.

If Moira died so that she could begin anew with the foreknowledge of when Nimrod would come online — the task Charles Xavier warned his X-Men of as something that cannot come to pass in the last issue — then… why is Nimrod still around in Powers’ X³ timeline? And in such a vastly different form, not just physically, but in his outlook on mutantkind? He’s very good at what he does, and what he does isn’t very nice. (Image: R.B. Silva, Adriano Di Benedetto, Marte Gracia and Clayton Cowles, Marvel Comics)

The Nimrod-drone aiding the Librarian in X³ in their quest to merge a living worldmind of mutant consciousness with the machine-mind that is the classic X-Men villain known as the Phalanx is already a wild enough scenario.

But what if Moira X’s tenth life isn’t simply about stopping Nimrod before it can come online, but simply changing its mind enough that it might one day seek to help mutant kind instead of persecuting it?

What if the only way to do that — and the only way to see Moira get that “maybe 11” lives Destiny’s portent revealed back in House of X #2, something now clearly desperately driving her — is to literally meet Nimrod in the middle, and become a hybrid of their own together to show the way forward for Sentinel and Mutant alike?

It’d certainly explain the apparently surprising end of the Human-Machine-Mutant war, and why a Nimrod with a change of mechanical heart survived that end.

So far these twin series have been fascinated with three things: Cycles and how to break them, the inevitability of AI being turned upon mutantkind and the futile tragedy of that, and hybridisation — whether that be the machine-man coupling seen in X²’s future war, the amalgamated chimera mutants fighting them like some kind of bizarre mirror match, or even Nimrod and the Librarian’s plan with the Phalanx.

Given that fascination, maybe such a melding of Mutant and Sentinel is a logical outcome.

But House and Powers alike have been equally surprising us at every turn — and with the stage now set for Moira X’s tenth life to really start unfolding to the audience, we’ll have to wait and see just how all this comes together now that House and Powers can really get underway.