The Acer Predator Triton 900 Is Almost A Great Portable Battlestation

For a long time, big gaming notebooks were just that: thick, heavy, and more powerful versions of standard laptops, even laptops as ridiculous as the Acer Predator 21X from back in 2017. But more recently, gaming notebook makers have been experimenting with more far-out designs like what we’ve seen from the Asus ROG Mothership — which looks like what you’d get if a Microsoft Surface and a Star Destroyer had a baby — and now this: the Acer Predator Triton 900. 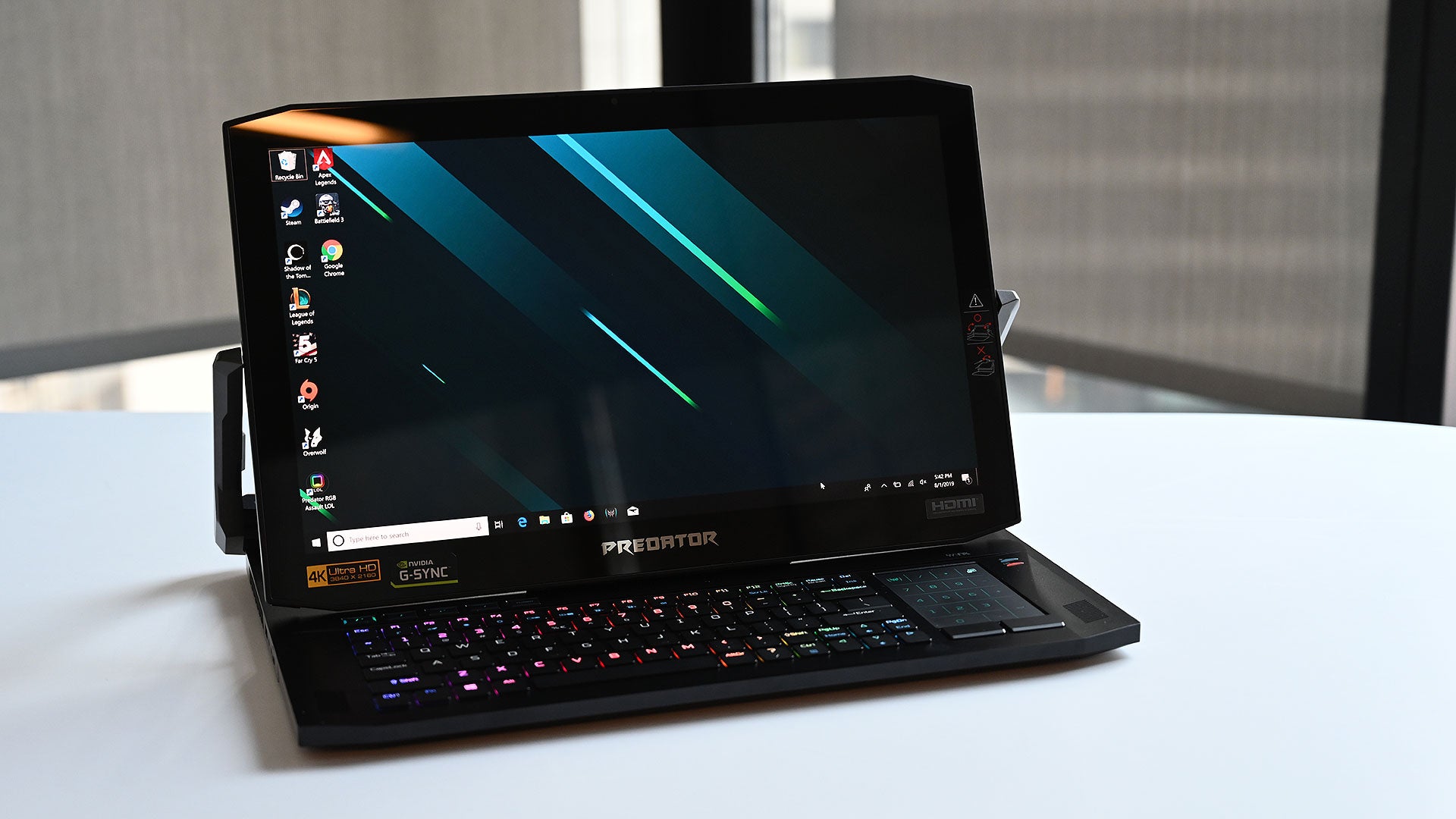 Before you even open it, the Triton 900 appears more cut and chiselled compared to something like MSI’s GT75. Its exterior panels are made from machined aluminium, and despite weighing in at just under 5kg, the Triton 900’s body feels rock solid and doesn’t suffer from even a hint of flex.

But open up the Triton 900 and you’ll reveal its secret weapon: a 17.3-inch 4K touchscreen that can rotate almost a full 180 degrees inside its innovative frame. This means you can use transform the notebook into 4 modes. There’s traditional laptop mode, a sort of gaming mode enabled by tilting the display and pulling it forward, a presentation mode where the screen points in the complete opposite direction, and something that’s almost a full-blown tablet mode, but not quite.

The first position is self-explanatory, while the second one is a great option for gamers who sit like Overwatch pro Dafran, with their noses 15cm or so away from the screen. But my favourite transformation is something I’ve nicknamed battleship mode, as it basically allows the Triton 900 to become a high-powered mobile all-in-one.

By fully rotating the screen into presentation mode and then positioning the laptop so that its deck and guts sit behind the screen, you can attach an external keyboard and mouse and get a better gaming experience than a lot of custom gaming desktops. The Triton 900 has a plethora of ports including two USB-A ports, two USB-C ports, dedicated headphone and mic jacks, and Ethernet, not to mention full-size connectors for both HDMI and DisplayPort.

The only thing that really takes away from battleship mode is the placements of the Triton 900’s power port, which is smack dab in the middle of the laptops backside. It sticks out and prevents you from pushing a keyboard closer to the screen. And if you’re thinking of gaming without being plugged into an outlet, you might want to reconsider. On our video rundown test, the Triton 900 lasted just two hours and five minutes on a single charge. That means getting through even one round of Apex Legends on battery power alone could be real dicey, though that shouldn’t really be a surprise on a laptop like this.

The only mode that comes up short is tablet mode, because the Triton 900’s hinge frame comes with two small tabs that prevents the display from rotating a full 180-degrees. That means the Triton 900’s screen still has a slight tilt when laid flat, which makes it closer to something like the easel mode you get with a Microsoft Surface.

Of course, all this comes with a price, both practically and financially. The Triton 900 starts at $6499 for an Intel Core i7-9750H CPU, 32GB of RAM, 1TB SSD, and an Nvidia RTX 2080 GPU. And if you opt for one with a Core i9 processor similar to what we have in our review model, the price jumps up to just shy of $US5000 ($7397). Yikes. This version also doesn’t appear to be widely available in Australia at this stage. 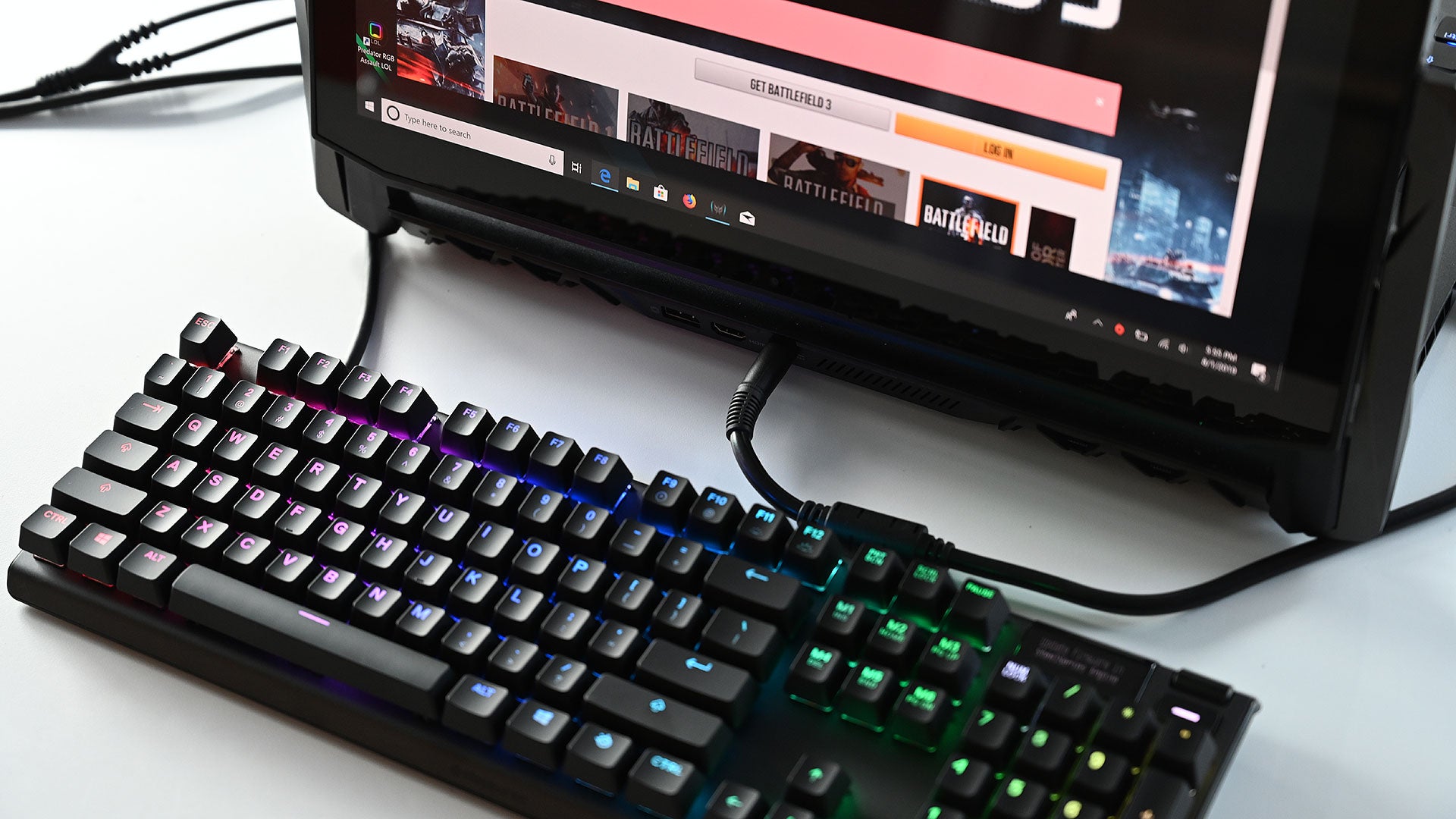 It’s not a huge deal, but I wish that power cord stuck out somewhere else. (Photo: Sam Rutherford, Gizmodo)

That said, the Triton 900’s biggest burden may not even be an economic one. Owning a laptop this big and powerful isn’t like deciding what colour shirt to wear, it’s a lifestyle. You have to go to the gym so you can properly carry the Triton 900 from one place to another without feeling sore the next day. The laptop alone weighs just under 5kg, while its power brick adds another three and half pounds. The only real concession to portability Acer makes on the Triton 900 is not having to lug around dual power bricks, which sometimes happens on monsters like the MSI GT75.

You may also need to get a new bag, because the Triton 900 doesn’t even come close to fitting in my everyday carry messenger bag. In fact, there are some backpacks that can’t even accommodate the Triton 900’s dimensions, not to mention any other gamer gear you might want to lug around like headphones, mouse, and keyboard. 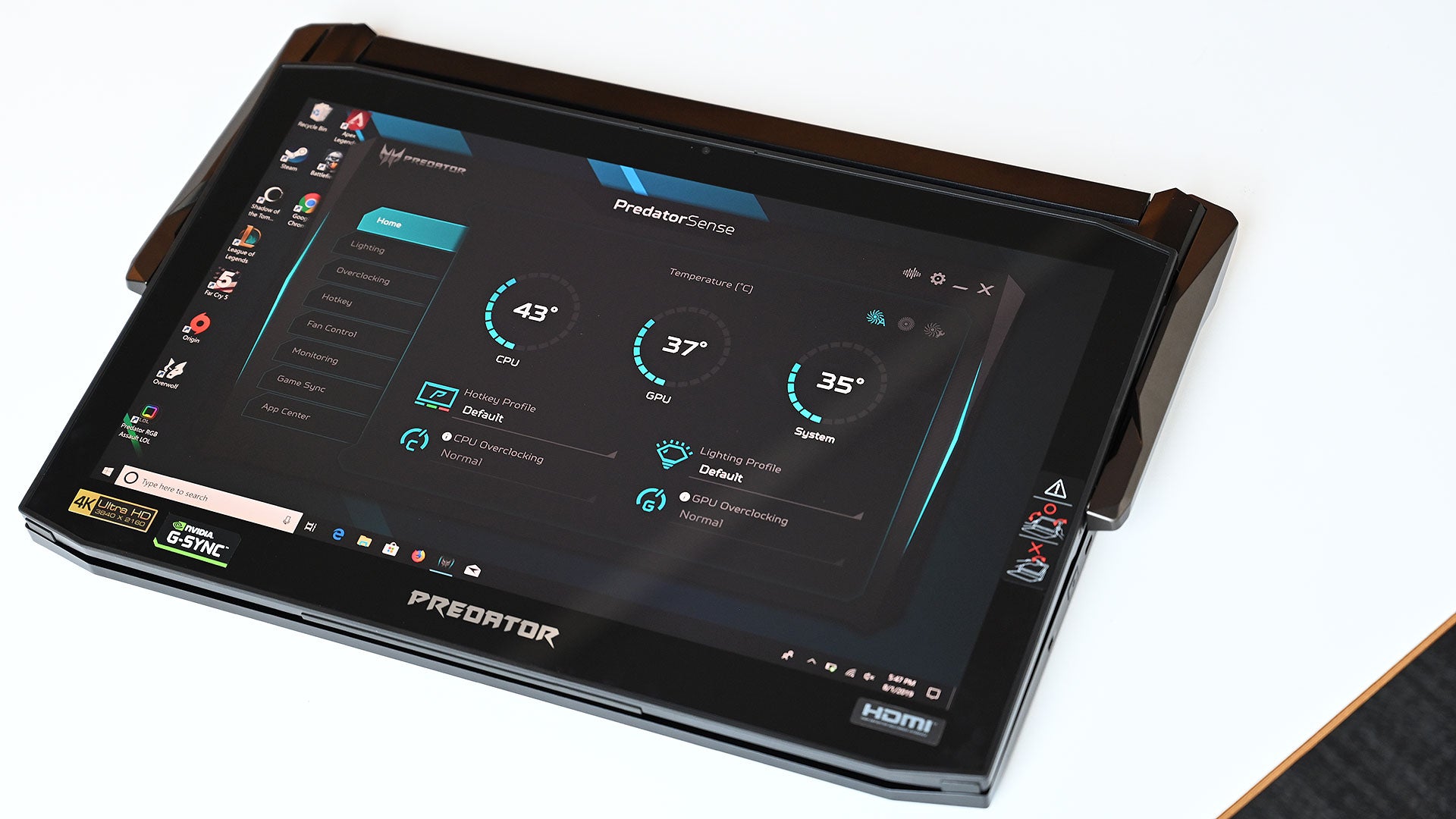 The Triton 900″s screen can be positioned so that it’s almost completely flat. 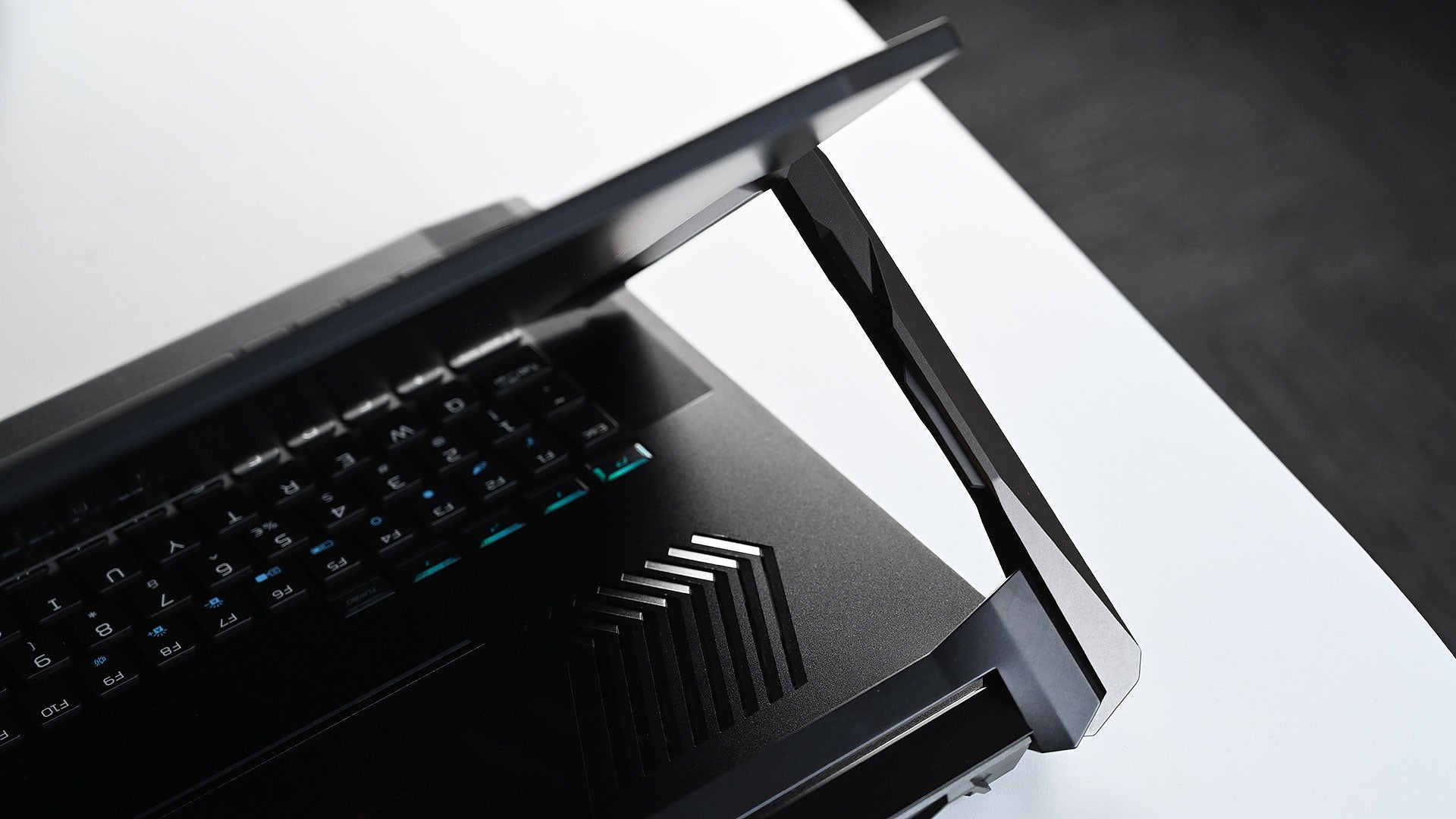 Those tiny tabs on the display’s frame prevents the Triton 900 from going full tablet. 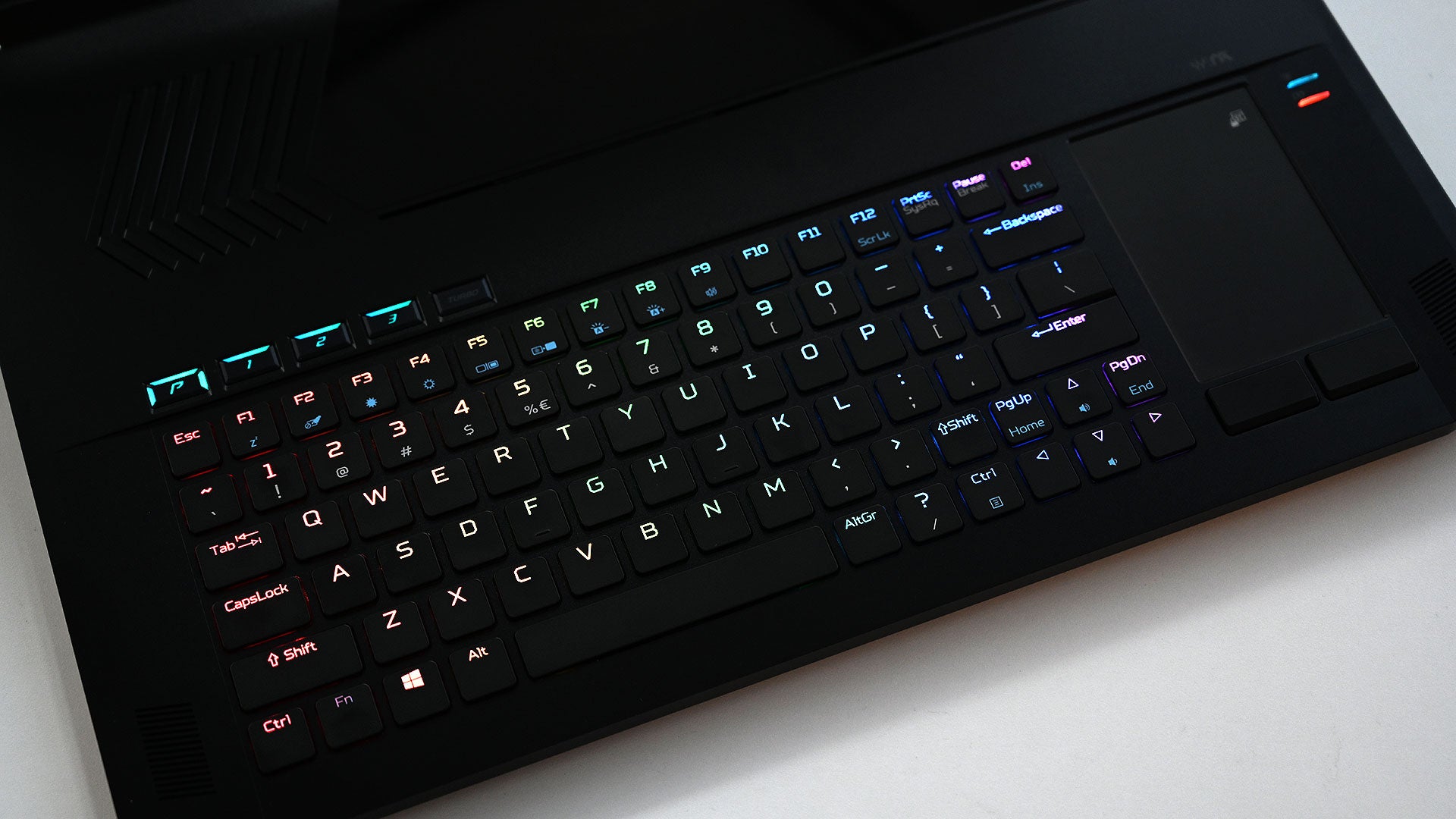 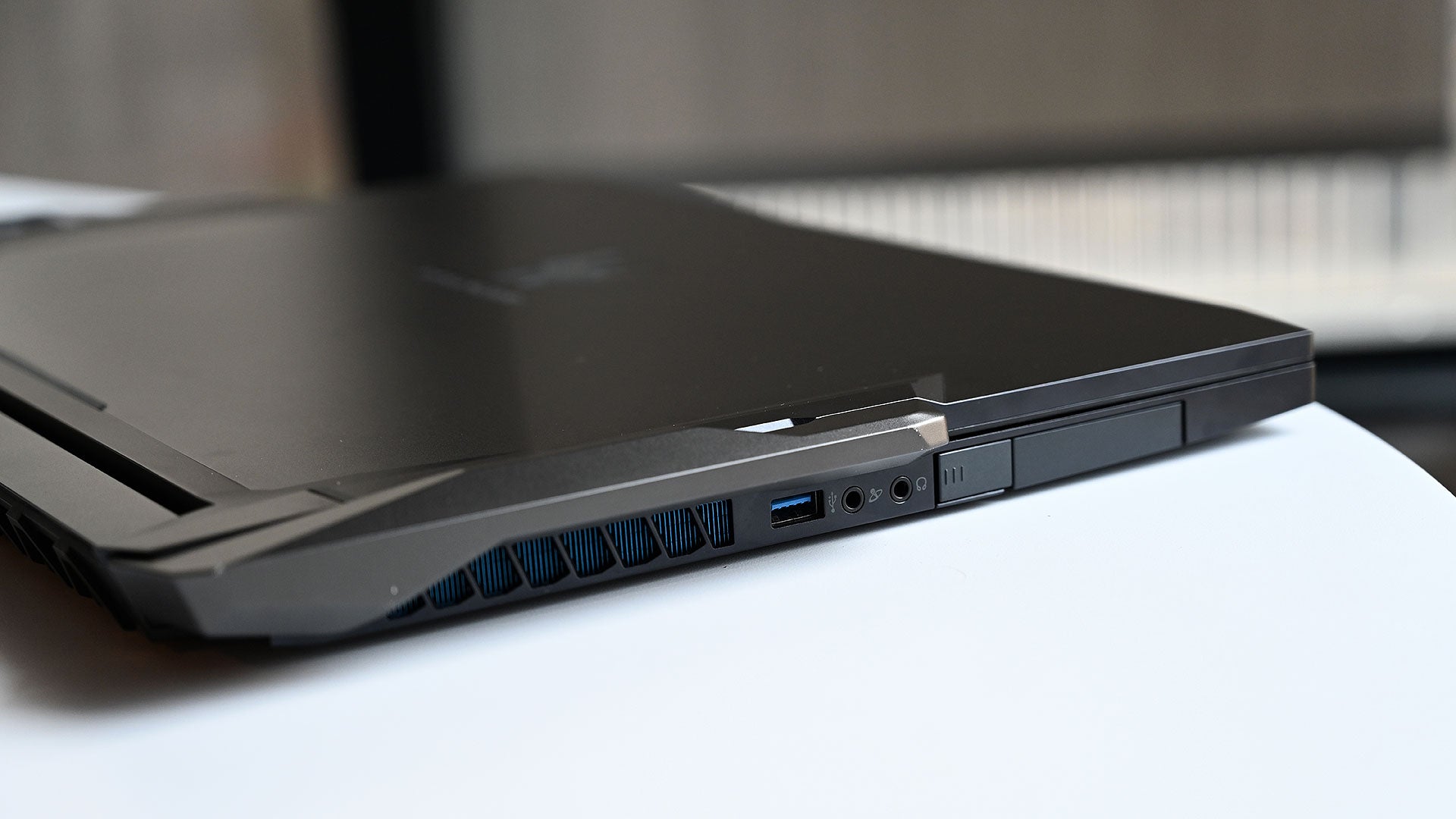 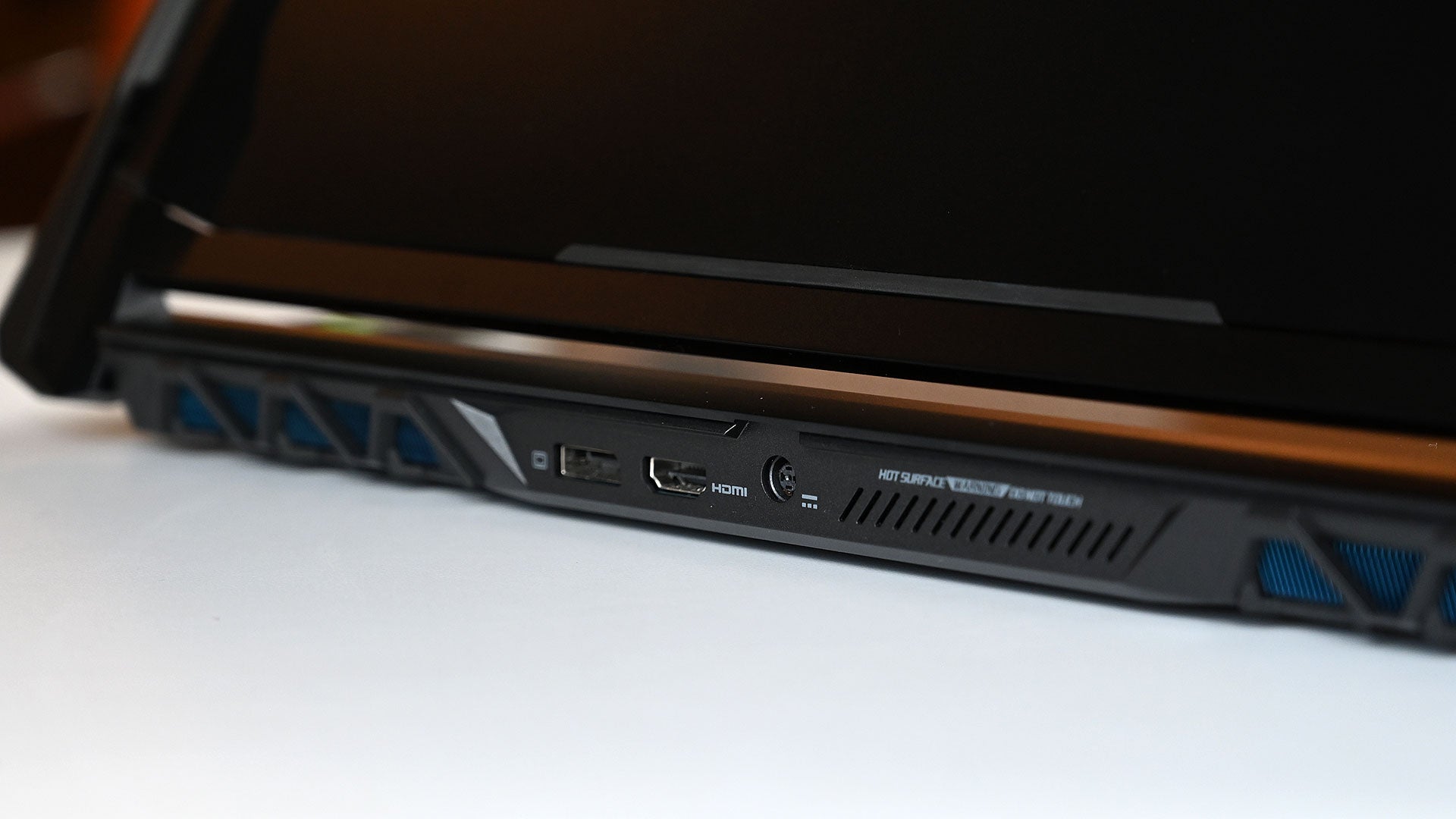 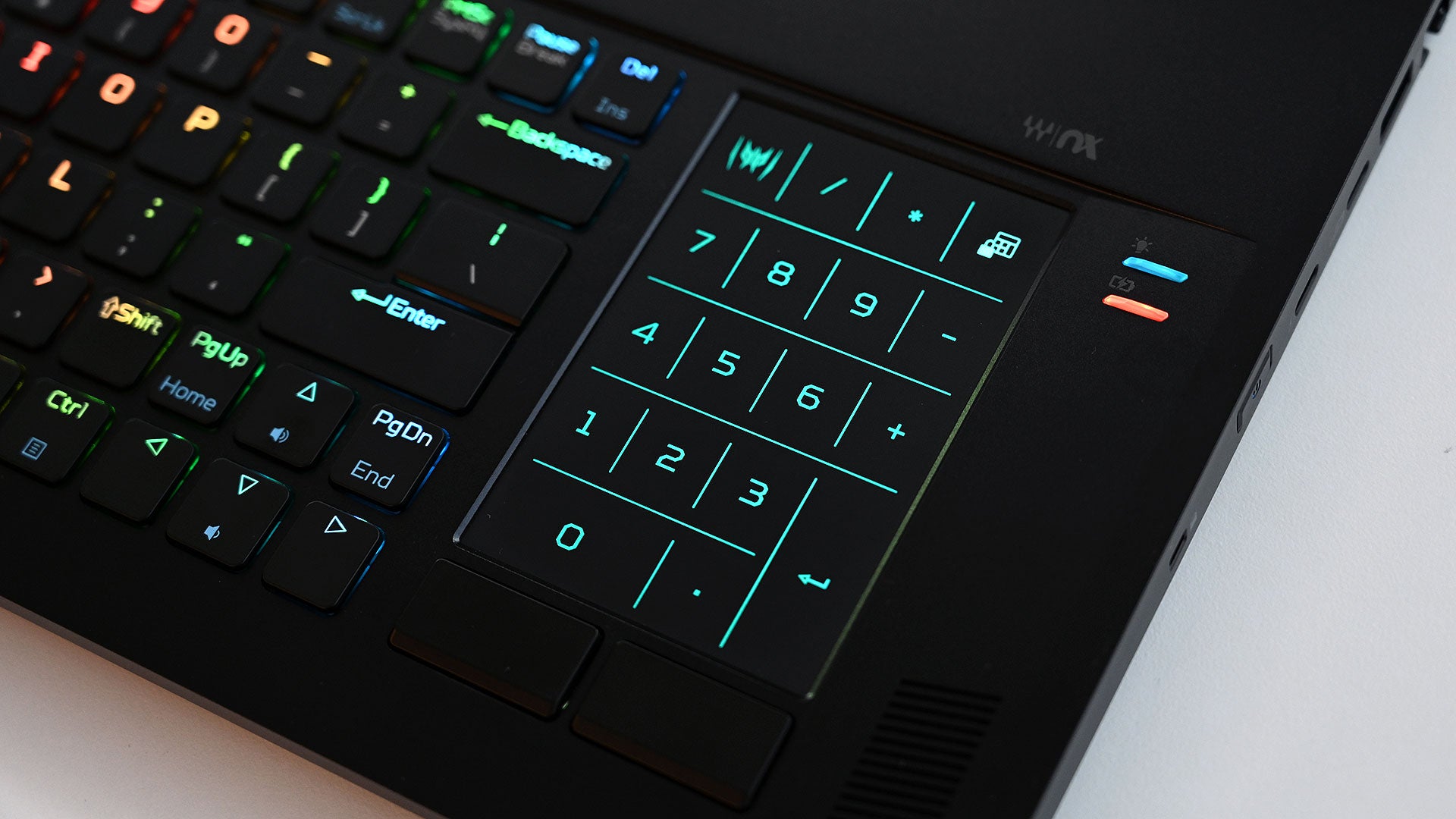 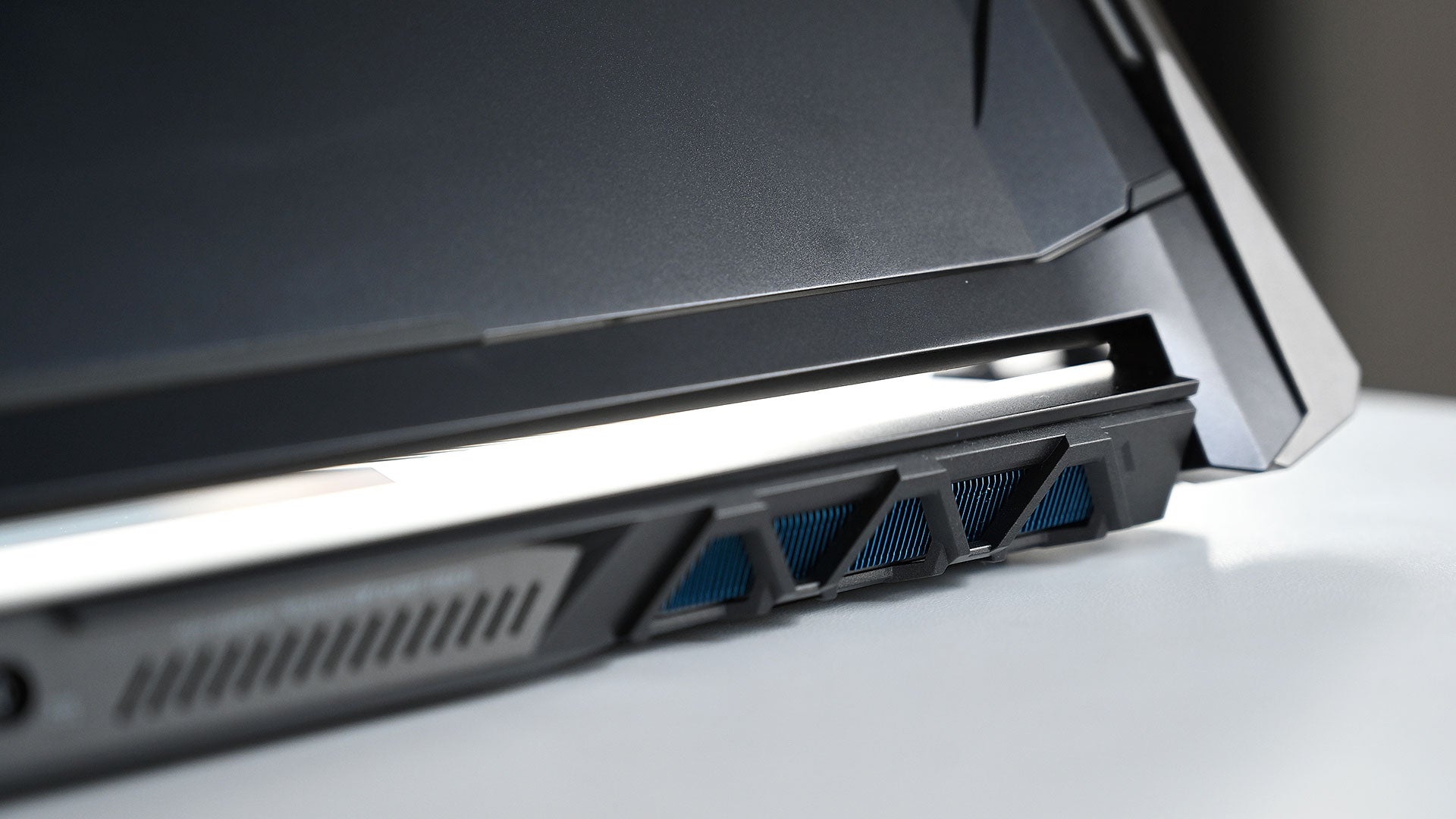 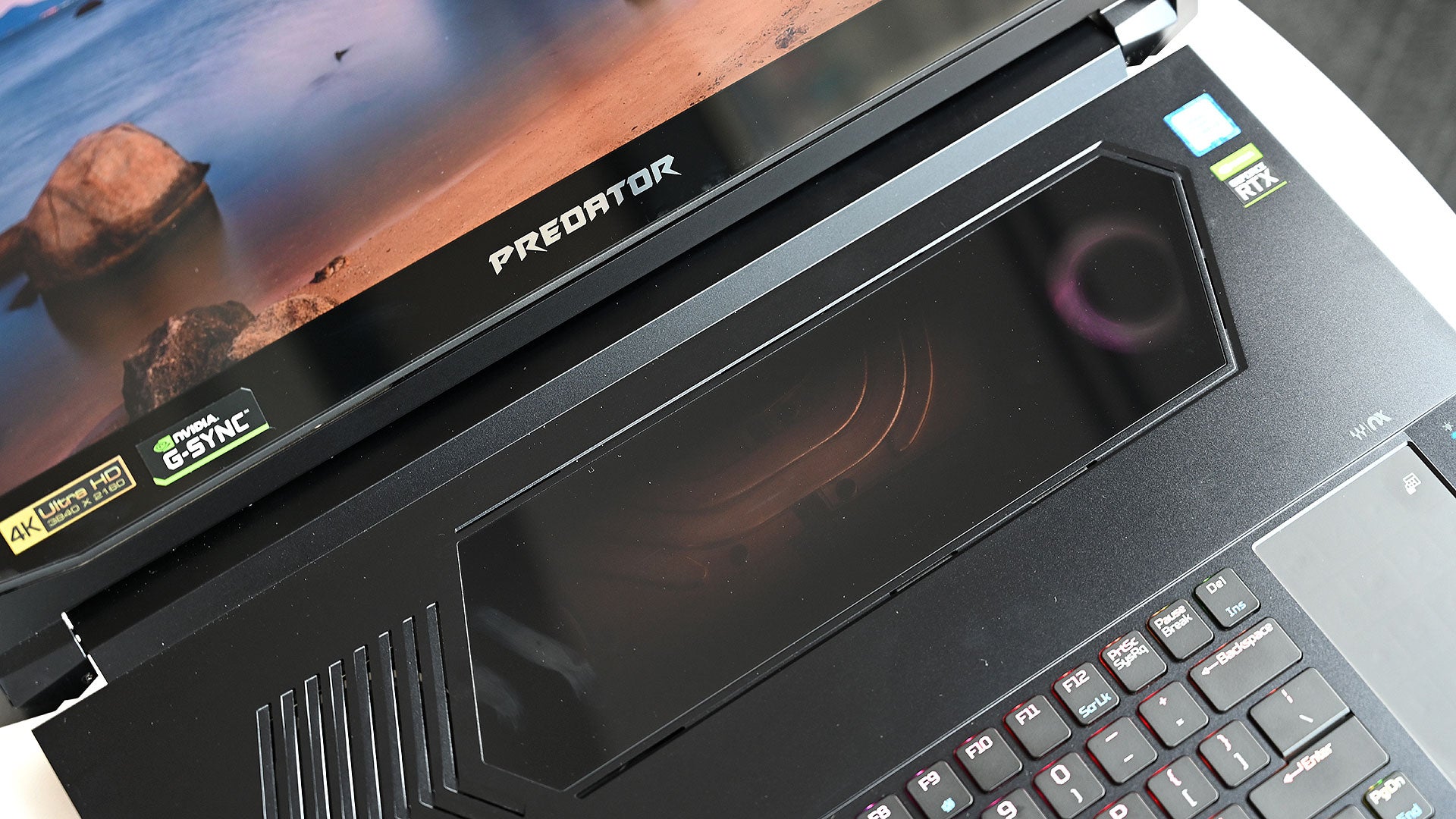 Speaking of mice, while most self-respecting PC gamers wouldn’t dream of playing even casual titles with a laptop’s built-in touchpad, it’s an especially bad idea on the Triton 900. In order to make room for the lights and glass window that lets you see inside the Triton 900’s case, Acer had to shift the laptop’s touchpad to the right of the keyboard, which didn’t leave the Triton 900 with a lot of space. The touchpad is seriously skinny, and while it does have discrete buttons for left and right clicks, it still feels cramped.

I do like that Acer included a touch button that lets the touchpad transform into a number pad — just a quick double-tap and a virtual numpad instantly appears. So even though it’s small, the touchpad is useful, and also potentially less annoying that the Triton 900’s keyboard. That’s because while the keyboard sports attractive per key RGB lighting and clicky mechanical switches, the keyboard’s layout is a bit of a mess.

To make room for everything, Acer shrunk the Right Shift key, misplaced the forward slash key, and moved a bunch of other keys to unusual locations. Like anything, you can get used to them given enough time, but the way Acer shifted things around means you’re looking at a longer than normal adjustment period, and if you’re someone like me who uses Right Shift as a push-to-talk key in Discord, you may have to completely rebind certain functions. 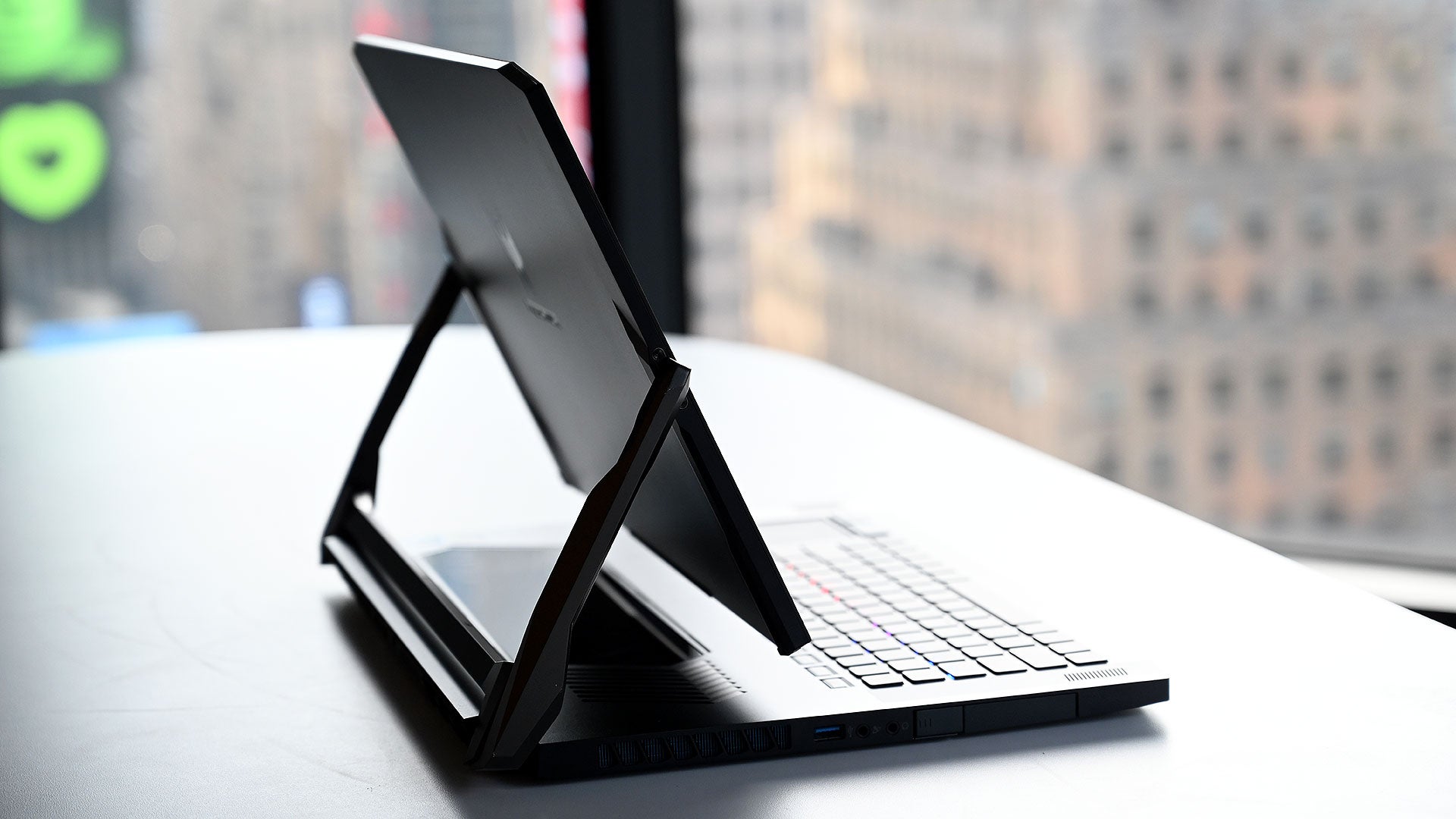 The last big effect of owning a Triton 900 is that it could turn you into a graphics snob. Even at its native 4K resolution (3841 x 2160) on ultra graphics settings, the Triton 900 averaged 55 fps in Far Cry 5. And because the Triton 900 has a G-sync display, even when you do dip below 60 fps, games continue to look smooth. Oh, those results were only with the Triton’s overclocking settings turned on Fast instead of Fastest.

In Shadow of the Tomb Raider at 4K and the highest graphics settings, the Triton wasn’t quite as impressive as it pumped out an average of 44 fps, but considering all the graphical effects like ray tracing available in that game, that’s still pretty solid. The one thing you won’t get though is support for even higher frame rates, as the Triton 900’s screen is limited to a 60Hz refresh rate. If you like seeing how all of a game’s graphical bells and whistles look on a colourful 4K screen, the Triton 900 is here for you. 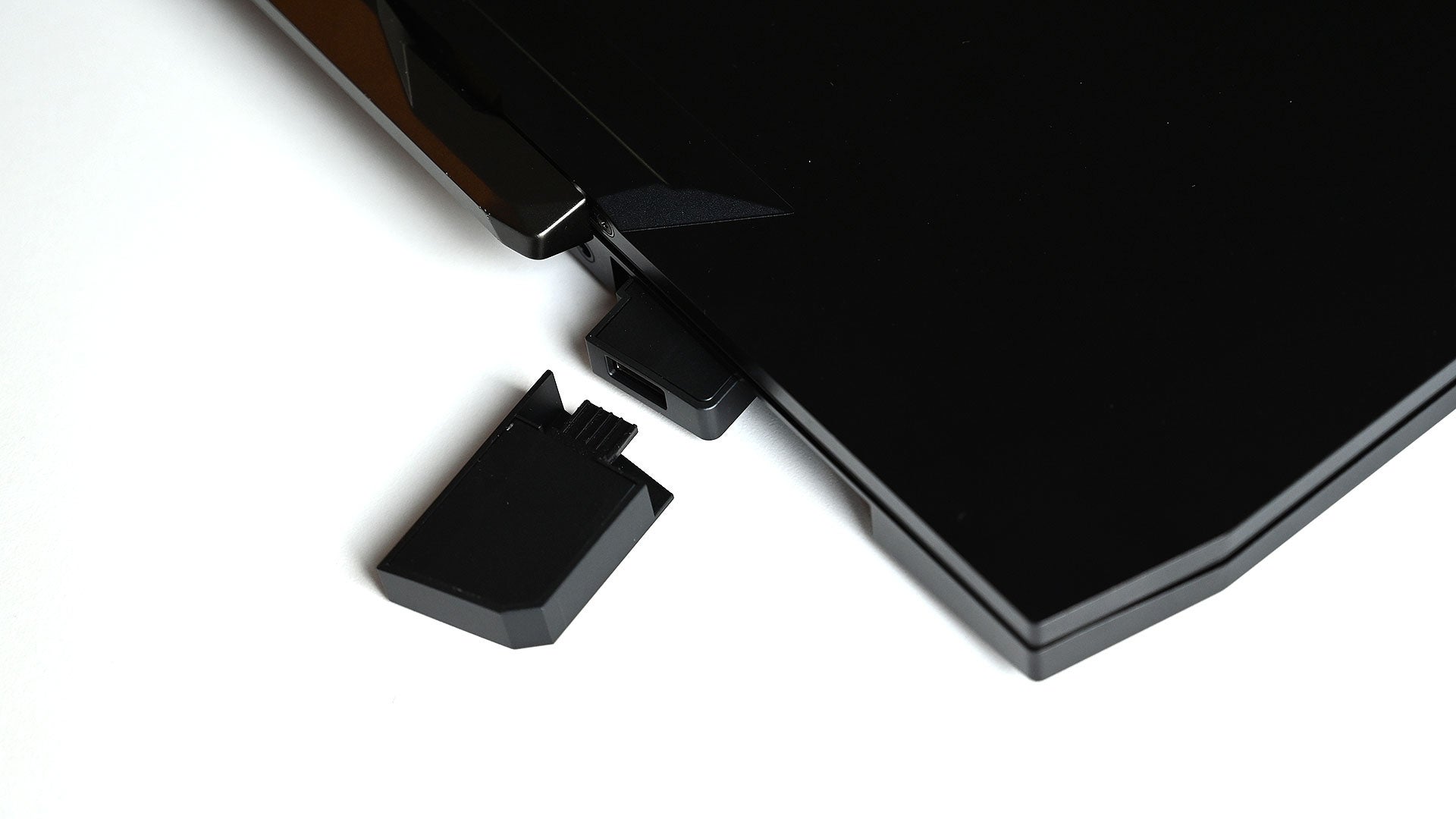 The dongle in the picture is just the placeholder that comes with the laptop because I didn’t have an Xbox One wireless adaptor handy, and my PS4 dongle didn’t fit. (Photo: Sam Rutherford, Gizmodo)

The Triton 900 even comes with a handy feature for gamers who prefer using a controller instead of mouse and keyboard. On the left side of the system, there’s fold-out USB port reserved for connecting an Xbox One USB dongle. Once you plug it in, you can fold the USB port back into the laptop and go on about your gaming without any unsightly protrusions sticking out of the system. For those who prefer using a PS4 controller, you’re sadly out of luck, as the PS4 wireless adaptor is too long to fit within the port’s cubby hole.

All told, Acer’s Predator Triton 900 is a bold attempt at expanding the boundaries of what a gaming laptop can be. It’s got class-leading specs combined with clever bonuses that make gaming on a laptop (even one that’s not all that portable) both easy and rewarding. But at the same time, to get the most out of Triton, you have to commit hard. With a starting price of $6499, the Triton 900 is the exact opposite of an impulse purchase. 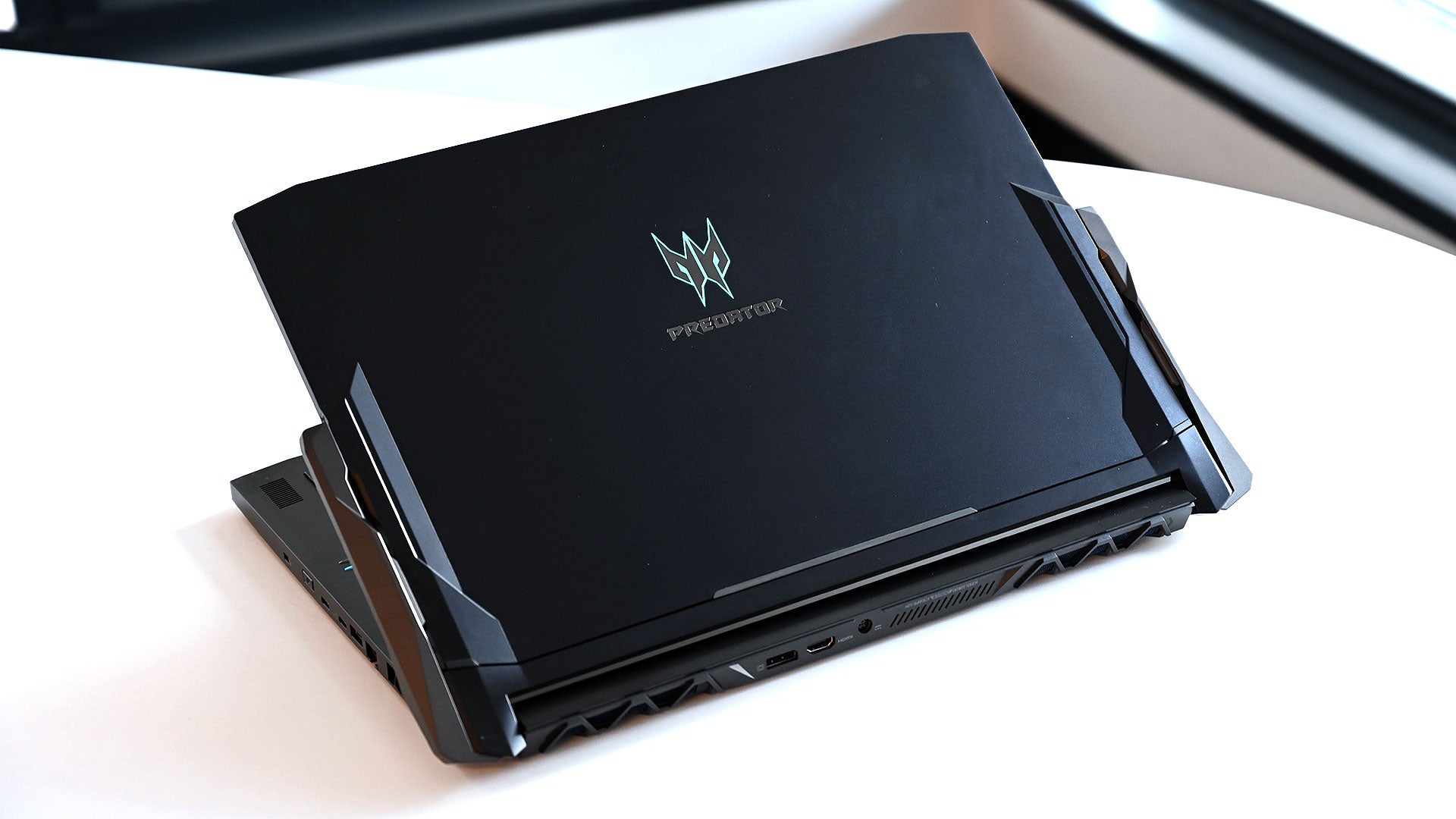 You’ll have to spend time getting used to quirks like its touchpad and keyboard, and spend energy supporting it by carrying around additional accessories like gamepads, heavy power bricks, and other peripherals. And with a price this high, I really would have liked to see a screen option with a 120Hz refresh rate. Still, the Triton 900 is undeniably a finely crafted premium machine, and it’s certainly earned its place as the flagship of Acer’s gaming laptop lineup.