If this is where humanity came from, no wonder we’re so messed up.

Ancestors: The Humankind Odyssey is designer and director Patrice Désilet’s first published game since he left the Assassin’s Creed series — which he played a massive role in creating — almost a decade ago. It is also one of the most ambitious games I’ve ever played, for better and worse.

The idea behind Ancestors is that it’s a simulation of the dawn of man, with players taking control over our primitive forebears and guiding them out from the animal kingdom to the earliest days of what we’d recognise as humanity. It’s not a strategy game as that might suggest, though. You’re literally playing as one of the apes/men, moving them directly around the jungle and interacting with the world around you.

As you investigate your surroundings, sniffing and poking and eating stuff, you’ll eventually learn how things work and where things are, and as your character grows old, you’ll be able to reproduce and even skip through millions of years, both as direct ancestors and also evolutionary descendants.

From its first moments Ancestors feels like a grand idea, a ground-floor representation of a sweeping and pivotal moment in the history of our species, something fresh and fascinating and important. It’s an idea that is occasionally realised, especially early on in the game, with moments of sheer joy as you first swing through trees and stare in awe as you discover how to make spears, make babies and turn a pile of leaves into a bed.

The rest of the time, sadly, Ancestors is a grind. 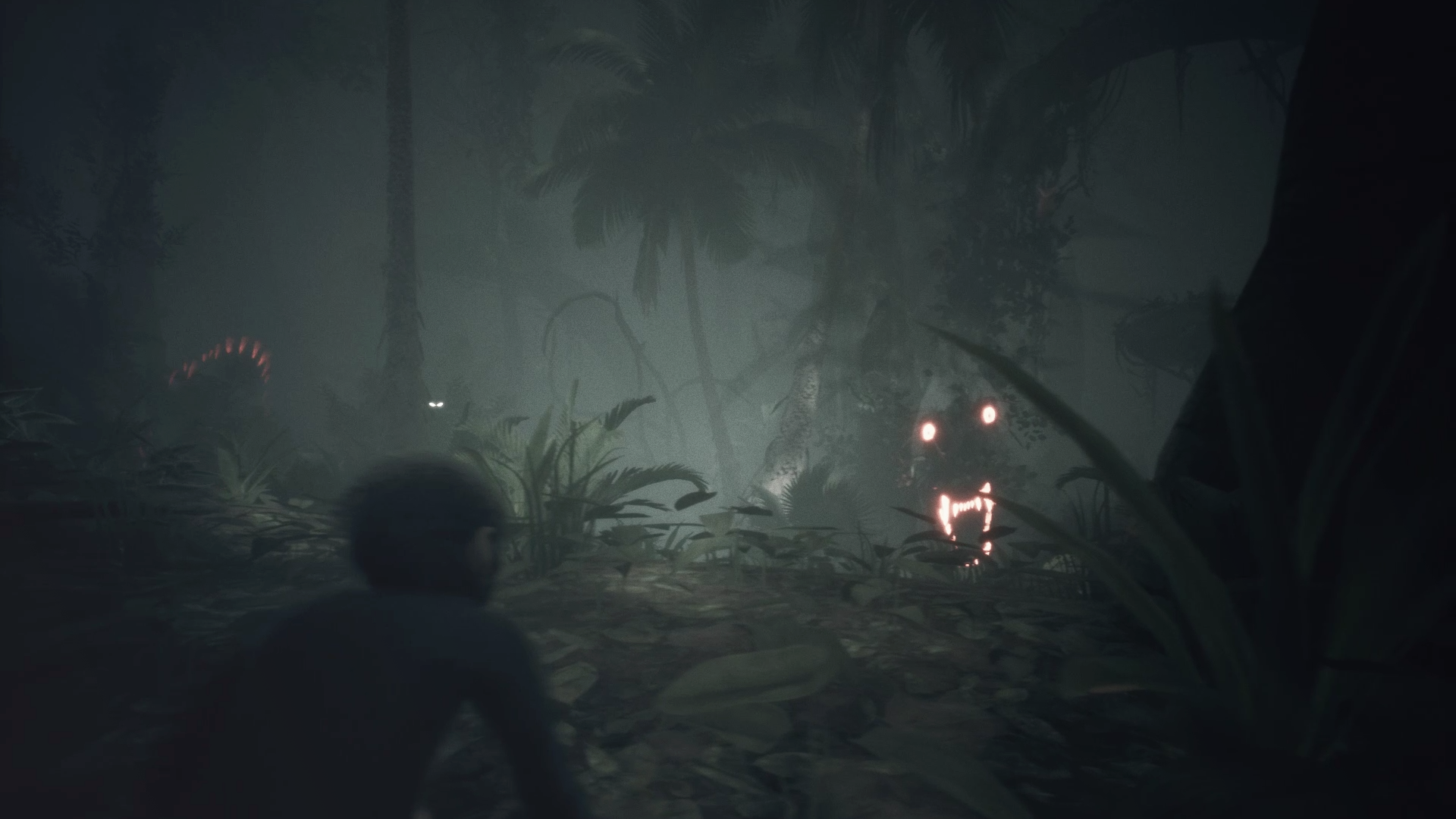 Your expansion is limited by the presence of “fear”, which strikes you while exploring regions outside your comfort zone. You conquer this fear the same way you do most other things in Ancestors: by standing still and scanning objects.

Ancestors wants you to play through an incredibly complex and convoluted process — the direct, hands-on advancement of a species! — yet at the same time revels in its decision to tell the player almost nothing about how to actually do this. And I don’t mean in a “failure of presentation” kind of way, I mean in a deliberate, “we say we’re not telling you anything in the loading screens” kind of way.

Much of my time with Ancestors — and this was pre-release, so I’m one of the few to play as it was intended, without FAQS and walkthroughs — was spent not knowing what the hell to do next or how to do it, which left me feeling endlessly lost and frustrated.

I can see the reasoning behind this, as our ancestors didn’t have anyone helping them learn the world around them. But as a player, I hate it. Ancestors wants me to engage in an endless game of trial-and error to discover what helps (and what hurts) me, but there’s nothing fun or interesting about this, because in this game you only learn things by simply doing them, over and over. It’s education by brute force and repetition, and it sucks.

Outside of its rare moments of brilliance, those fleeting seconds where everything it’s trying to do comes together, Ancestors is a drag to play. Your movements, occasionally graceful, are also frequently busted, especially anywhere near rocks or cliffs. Danger is everywhere in the form of predators, but you can never interact directly with them, only respond to clumsy QTEs. You unlock new abilities by repeating existing ones, but without anything to tell you how you’re going it can sometimes take forever.

Contextual interactions (each button on the controller does something different depending on where you are and what you’re near) get messy. The tutorial, reliant on you doing certain things in a certain order that it never tells you, is terrible. The user interface over-communicates in some respects and is then woefully unhelpful in others.

Ancestors is at its worst, though, when the game’s opaqueness, punishing survival gameplay and technical unreliability all decide to get together. Until you’re able to build effective weapons, this is a very bad time.

Ancestors has a rogue-like element to it, where every time you start a new game, you have to start at the very beginning. There aren’t chapters to skip to, or advances you can bookmark, every timeline you begin lives and dies with the hominids you’re controlling. This makes every life precious, and means every time you’re forced to restart, it’s a pain in the arse (more on that soon).

A few days into my review, having already had to restart a few times as I learned the ropes, I’d got rolling and carved out a hardy little clan, who through hours of hard work and curiosity had figured out how to move to a new settlement (a safe space where the game’s breeding and levelling takes place).

One night, after a full day’s exploring and eating mangoes, I lay down to sleep and…a tiger attacked us then somehow got stuck inside the settlement, which through its endless QTE triggers trapped me in an endless loop of my clan getting eaten one by one until everyone was dead.

Another even more successful clan, who were many evolutions deep and had moved on from the game’s jungle beginnings, had to be restarted because a bug popped up that meant no matter where I was or what was near me, my entire family were always in an alert state, which prevented them from ever resting or improving their stats.

Mishaps like this are annoying at the best of times, but a restart in Ancestors is torture. While the game does let you create custom games based on clan size and starting location, you begin each new timeline at the very beginning, 10,000,000 years ago, no matter how far you got in the last game or how hard you worked or how much time you sunk into it.

And every time you start anew, you have to do the same old bullshit. Watch the same unskippable cutscenes, do the same mundane discoveries, endure the same limited mobility and interactions with the world around you. This adds up to hours of frustrating repetition every single time you have to start a new game, and because of Ancestor’s unwillingness to tell you how anything works, you’ll be restarting a lot.

Something that really frustrates me about this game is that Ancestors is so hell-bent on adhering to some strict code of realism when it comes to hiding information from the player, but is then cool with silly, video gamey perks like a giving you a leaf that protects you from broken bones, or a magical pine cone you can rub on your body to instantly heal massive wounds. 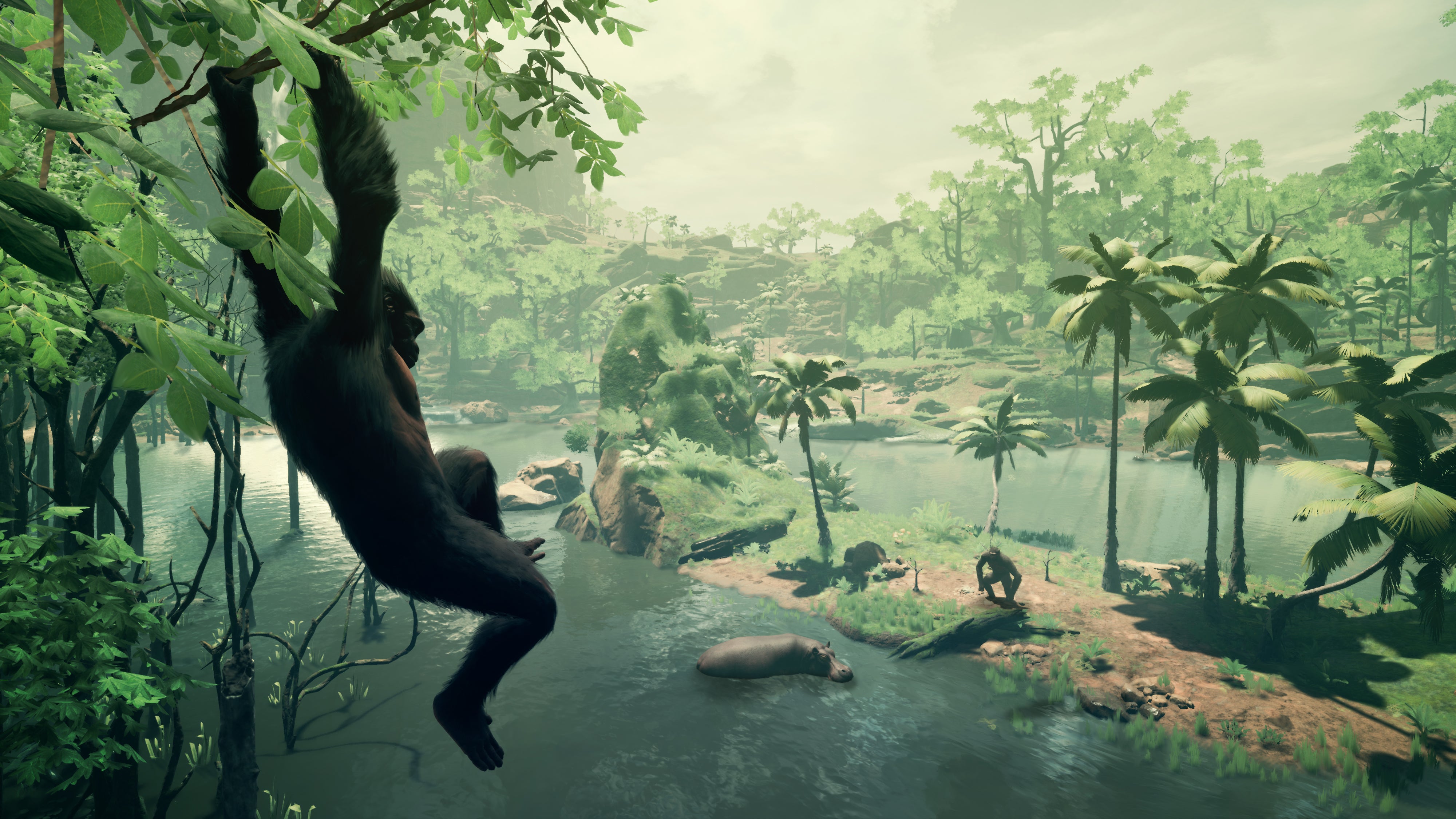 I don't ever want to sniff another fucking mushroom in my life.

Some cool ideas, and the way you can climb all over trees is great fun..

The endless repetition is soul-crushing.

I know this review has been pretty negative, which is mostly down to just how sour my last days with the game ended up, with some very successful timelines ended by events outside of my control. I do appreciate the attempt here though, as more games should try and tackle big ideas like this, and like Stephen I really enjoyed some of my initial discoveries and hours with the game.

It certainly gets some things right. The world itself is beautiful, and crafted in a a way that lets you get to really get to know the place. And for all the sluggishness in other areas, the way your characters can effortlessly move up and through trees is something every other third-person game — Assassin’s Creed included, ironically — could learn from.

And when any of you get to play it, you’ll obviously have access to a community and resources to help you through, which will help with streamlining your progress and cutting down on time spent banging rocks together (thus, most importantly, sparing you the need for as many restarts). It’ll sidestep the entire point of the game’s obfuscation, of course, but it’ll probably be worth it.

Our evolution from apes to modern man was a process that took a long time and involved pain, suffering, frustration, endurance and death. Those are all fine qualities for an origin story, but they’re not much fun to play through in a video game.