A massive storm rages overhead. Spend too much time in it and you’ll die. Enemies stalk a handful of ancient ruins scattered around a rocky beach. Take too long trying to kill them and the mission comes to an end, booting you back to the overworld map. At nearly every turn, Anthem’s new limited-time, score-based mode seems hostile to the prospect that someone might actually be interested in having some fun with it.

Cataclysm arrived yesterday, with little fanfare from BioWare. After spending several hours with it, I’m not surprised. The update adds a new activity called Echoes of Reality. It sets players loose in a large new environment punctuated by a handful of small arena fights and obtuse puzzles, then tops it all off with a boss fight that feels like it was Frankensteined together out of the already-existing ones.

It might be an otherwise nice seasonal addition in an alternate universe where Anthem is rolling along steadily with a lively player community in love with its underlying structure and progression system. But that is not the universe we live in, and instead of feeling like an impressive new milestone on the road to redemption, Cataclysm is a stark reminder of how hollow the whole Anthem experience still feels. 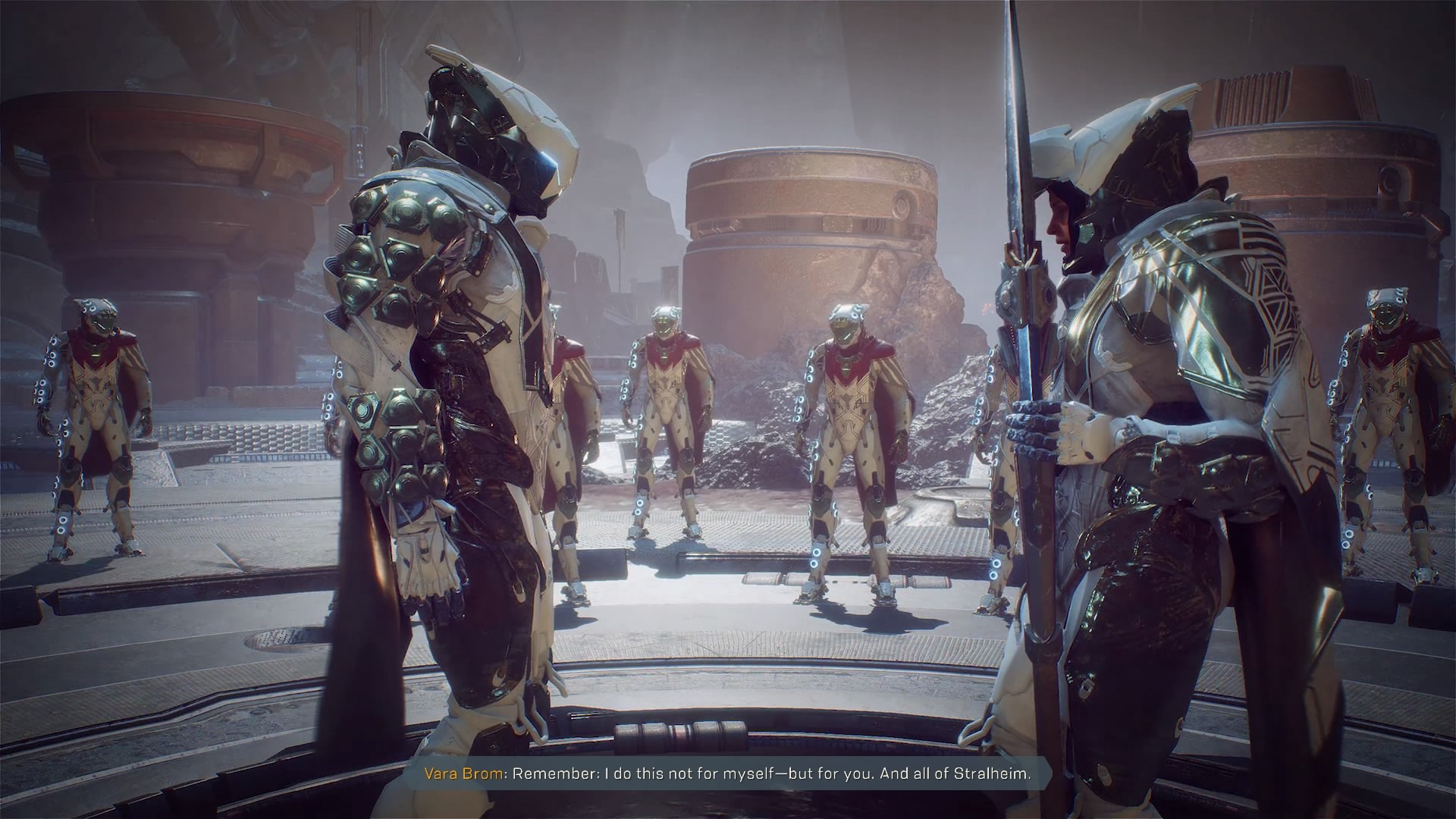 There are three new story missions that lead into Echoes of Reality, all of which revolve around capturing an evil scientist, Dr. Harken. He appears to have defected from the ranks of the game’s heavily militarised Dominion faction in order to assist you with trying to prevent certain disaster at the hands of a new Dominion leader, Vara Brom, who is intent on awakening Shaper relics to reassert the faction’s might.

A short cutscene plays midway through these missions to lay this all out. Why not at the beginning? I have no idea. Most of the dialogue surrounding it doesn’t feel worth the constant trips back to Fort Tarsis, the game’s hub, that are required to progress the story. That’s another way of saying it feels like the main game all over again, complete with another Strider mission that anyone who’s completed the main game will have already done a dozen times before. 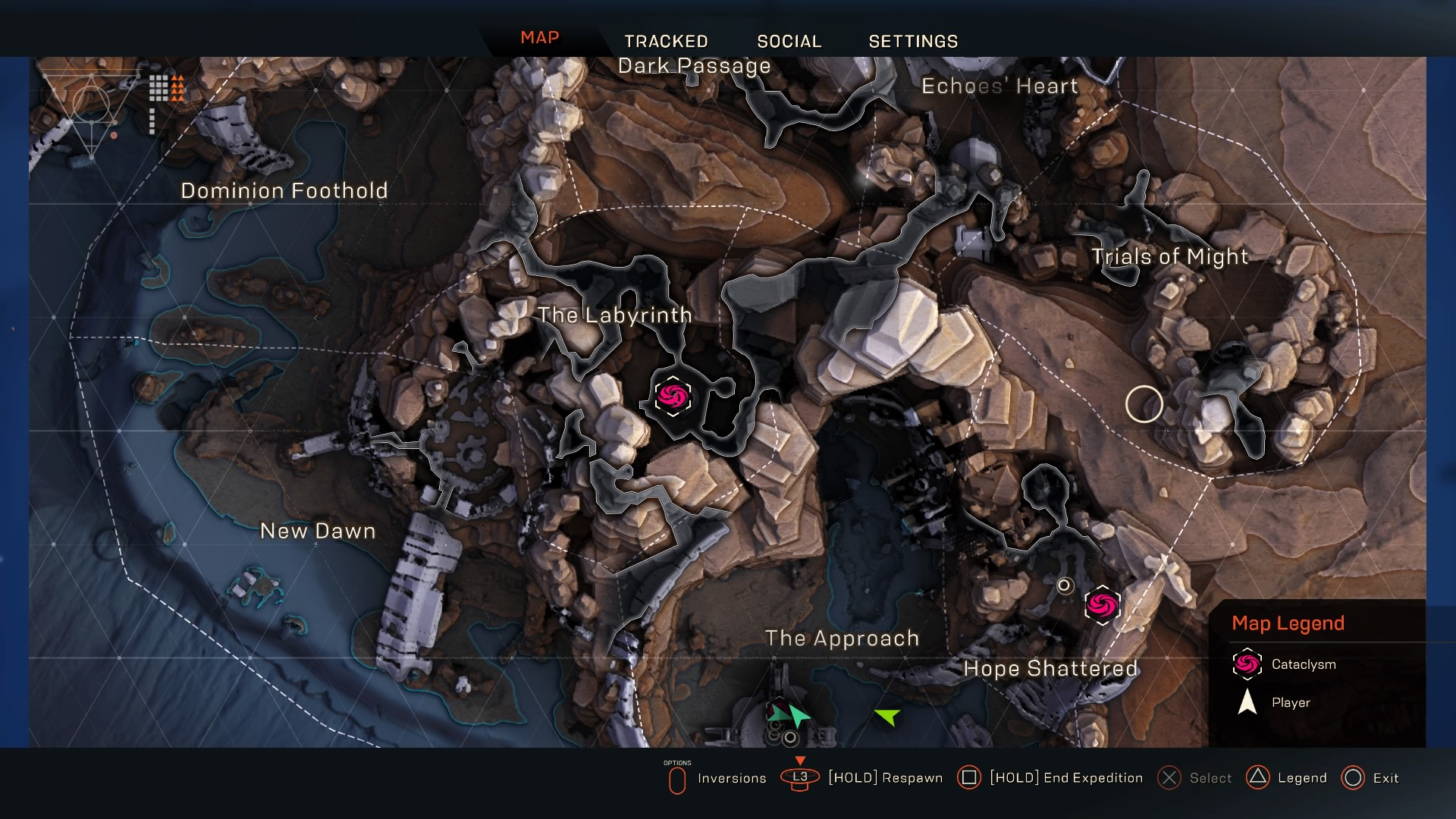 Nothing about Echoes of Reality feels particularly new, either, except for the area where it takes place. This consists of a large mountain ridge overlooking a tropical bay, one ripe for exploring in the game’s jet-pack propelled exosuits. But there’s hardly any time to. A 15-minute countdown timer requires strict adherence to the tasks at hand. And even if you do set out to take a longer look at what BioWare has spent the last few months creating, most of it is obscured by a torrential downpour and the encroaching red glow of sensors warning that the storm’s about to blow up your suit.

Echoes of Reality currently features three objectives prior to the boss fight. The first consists of fighting Dominion in a small arena and then activating half a dozen glowing pillars to bring down the shield around a crystal that needs to be destroyed. The second has you fight Dominion in a slightly bigger arena while trying to collect echoes to bring down another shield around another crystal that needs to be destroyed. The hitch is that the echoes are themselves shielded, requiring one group of players to stand on pressure-plates while another grabs them. I don’t know what the oldest puzzle in the role-playing game book is, but that one’s got to be in the first few faded pages. 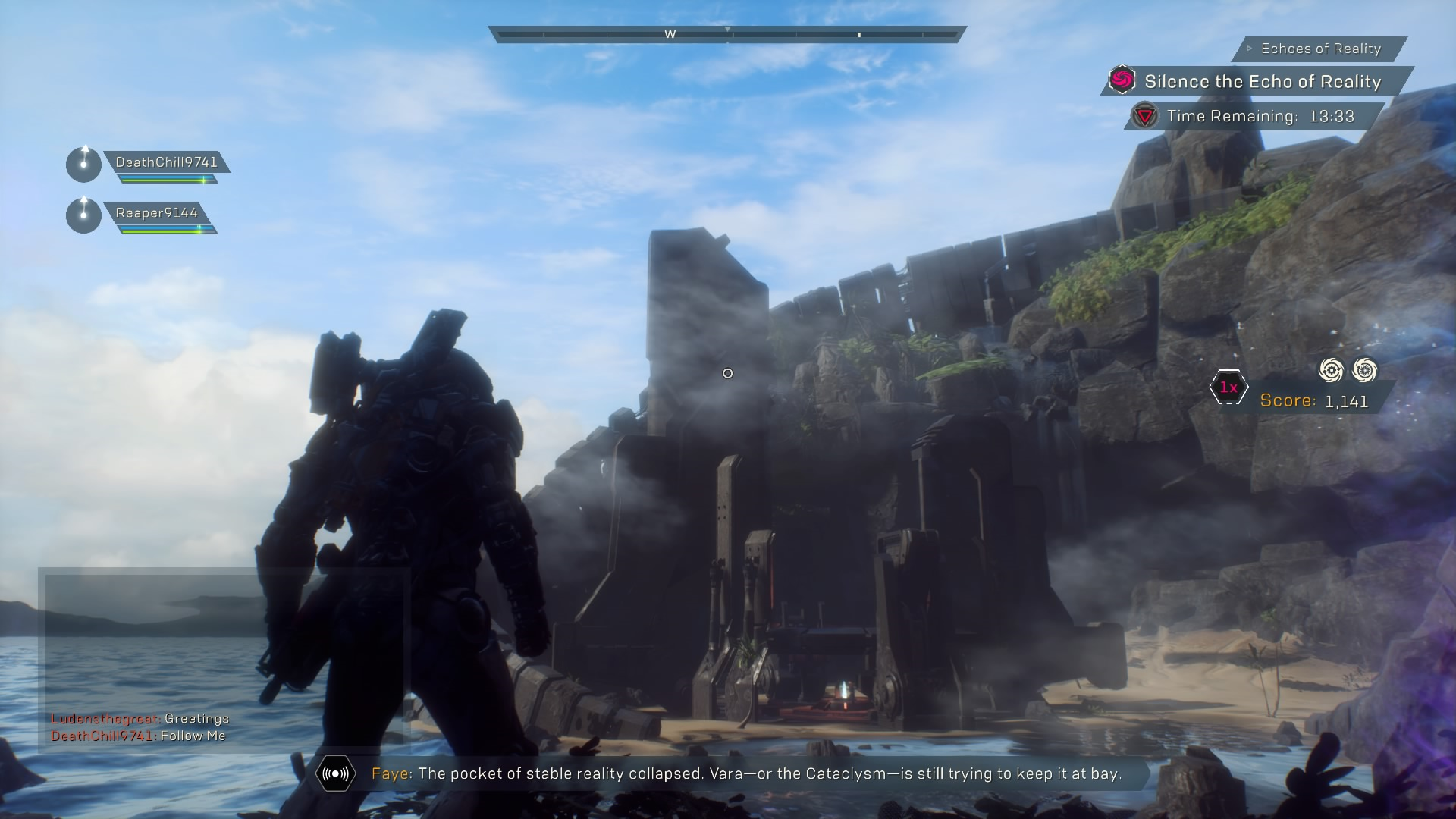 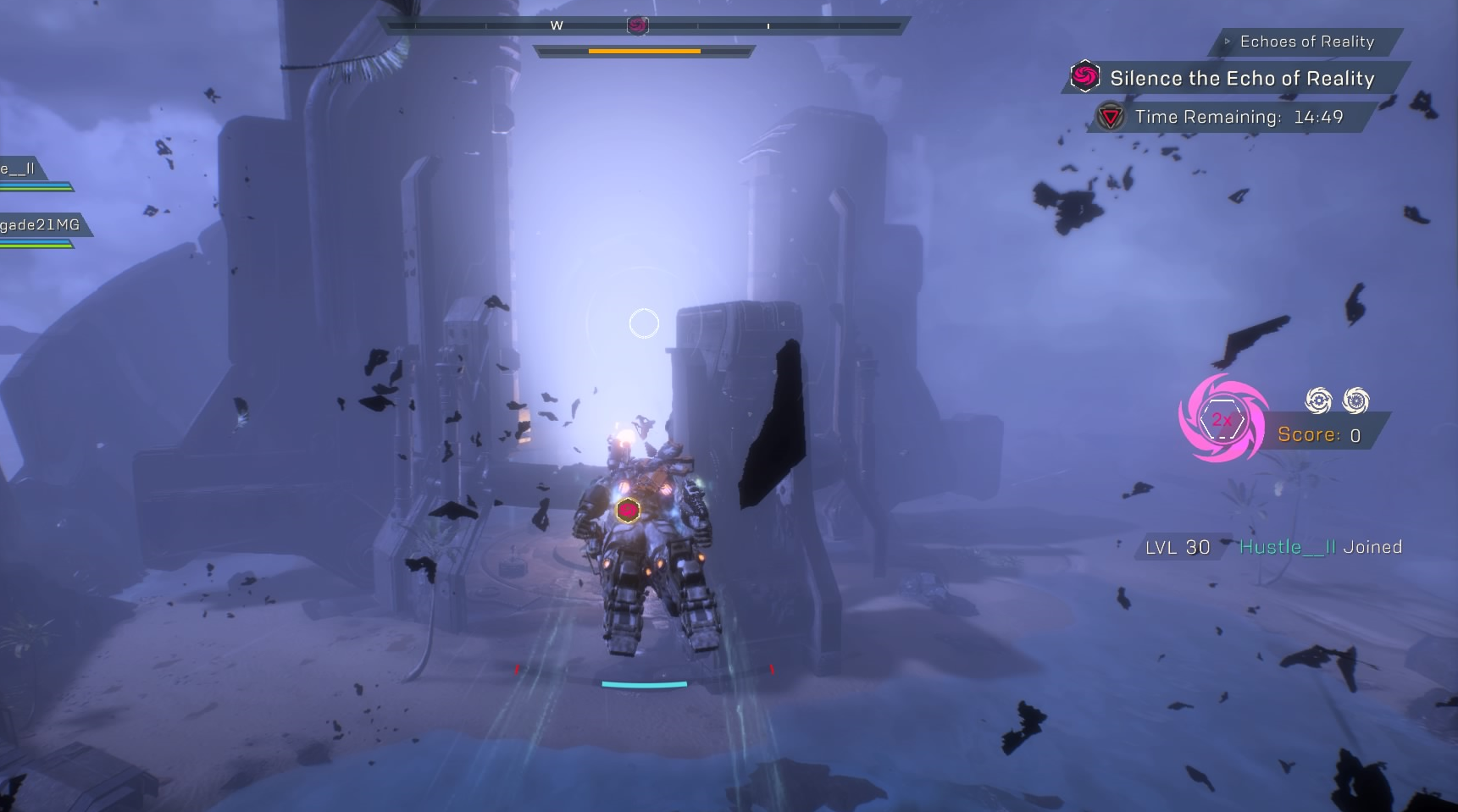 As an additional wrinkle, the echoes need to be taken into an underwater cavern where they power a device to unlock a fifth echo, without which the crystal’s shield won’t come down. In my own experience and based on a number of threads in the Anthem subreddit, this has caused no small amount of players a lot of frustration as they try to bring echoes into the cavern to get the fifth one while their teammates keep taking them back out to plug them into the devices protecting the crystal.

It’s a simple second step that any single player would be able to figure out within a few minutes, but which becomes unintuitive and annoying when trying to corral a bunch of strangers into working together as the timer continues ticking down.

The third objective takes place in a slightly smaller arena inside a cave. There you once again fight Dominion, this time while collecting pieces of an artefact that have broken off. The pieces need to be carried, but walls of light are constantly travelling back and forth through the cave. If they hit you, the piece you’re carrying goes back to where you found it. It’s straightforward enough to feel like busywork while requiring just enough patience to be anxiety-inducing thanks to the timer. Once that’s complete, it’s time to set off for Vara Brom. She sits at the northern edge of the map in, you guessed it, another arena, the biggest of the four. She’s giant, slow-moving, and seemingly not very dangerous save for a set of fire attacks. One of them turns the floor to lava. The other, which shoots out into the air, requiring you to take cover, will almost instantly kill you. Unless you’re paying close attention, it’s hard to know which she’s using, but unless you’re playing on the highest difficulty, it probably won’t matter. Echoes of Reality can be so hard to navigate the first few times through there was one occasion on which Vara was already half-dead by the time I caught up to my teammates, and why would I want them to wait when there’s only a minute or two left on the timer anyway?

There’s nothing narratively interesting or cinematically impressive about Echoes of Reality. It doesn’t try to tell a story, dig deeper into the game’s lore, or build up to a big, dramatic fight. Instead it feels like being yelled at by a drill sergeant and then forced to start over from scratch when the mistakes begin to pile up. Echoes of Reality is meant to be completed as quickly as possible, while obtaining as high a score as you can, usually by hitting mini-objectives along the way and putting in extra work to trigger the appearance of special mini-bosses. These additional puzzles and fights aren’t meant to be interesting. Instead, they’re meant to be completed so many times it practically becomes muscle memory. Doing so boosts efficiency, which in turn boosts your score, which in turn boosts your rewards. 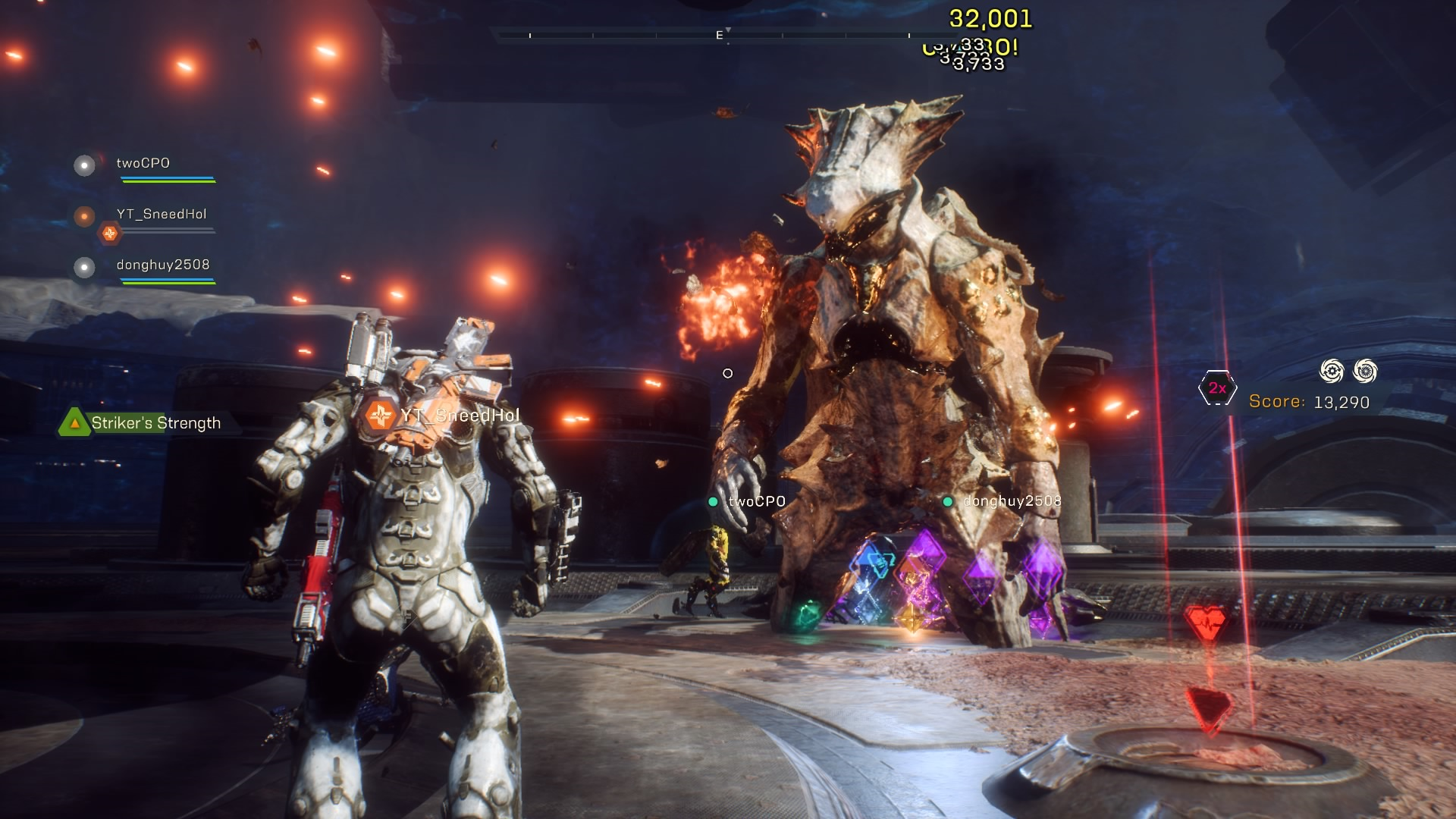 In addition to treasure chests filled with new rare gear, Echoes of Reality dishes out two new currencies called major and minor crystals as progressive rewards for higher scores. They can in turn be spent at a new vendor on cosmetics, none of which seem particularly dazzling but which are a godsend for players who have been disappointed with the number and variety of goods on display at the regular cosmetic shop. These new currencies can also be spent on special new chests that have random pieces of gear inside. This week the chests feature melee weapons, which are new to this update. Different gear will be featured in subsequent weeks.

This system provides a perfectly adequate new economy for players to partake in on their quest to make further customise and improve their Javelins, but it doesn’t change the fact that Anthem feels like a car that can only drive downhill because no one ever stuck an engine in it. For anyone not in it for the collect-a-thon, there’s little to get excited about in the Cataclysm update.

Anthem is still so beautiful to behold that I wish I could explore Echoes of Reality in in my own way on my own time, in all its different permutations. Instead it feels like playing an arcade game designed not to be fun but to convince you there’s a world in which it’s worth trying to collect the 10,000 tickets needed to buy the most expensive prize in the window.