Stylish action is what we’ve come to expect from Platinum Games. It’s the Osaka-based studio’s bread and butter. Whether it’s highly stylised original work like Bayonetta, Nier: Automata, and Vanquish or licensed games like The Legend of Korra and Transformers Devastation, much of Platinum’s work is built on a strong foundation of action combat. The style is fast and flashy, with gorgeous animation and special effects, while still being technical and deep, with timed dodges and parries and counters.

I anticipated such combat in Astral Chain, and I was not disappointed. I was, however, surprised to discover that while fighting is the foundation of Astral Chain, Platinum has built such a rich and storied world upon that foundation that the battles often take a back seat to the non-arse-kicking portions of the game.

There is no dearth of arse to be kicked in the apocalyptic world of 2078. On the brink of extinction, the last remnants of humanity have retreated to the Ark, a fortified megacity built atop a man-made island. But humanity can’t catch a break, and finds itself set upon by Chimera, creatures from the astral plane who kidnap citizens and spread crimson corruption. The world’s last hope is a special police force known as Neuron. Neuron has figured out how to capture and harness the power of the Chimera, transforming them into Legions, living weapons bound to human operators through chains of an astral variety. 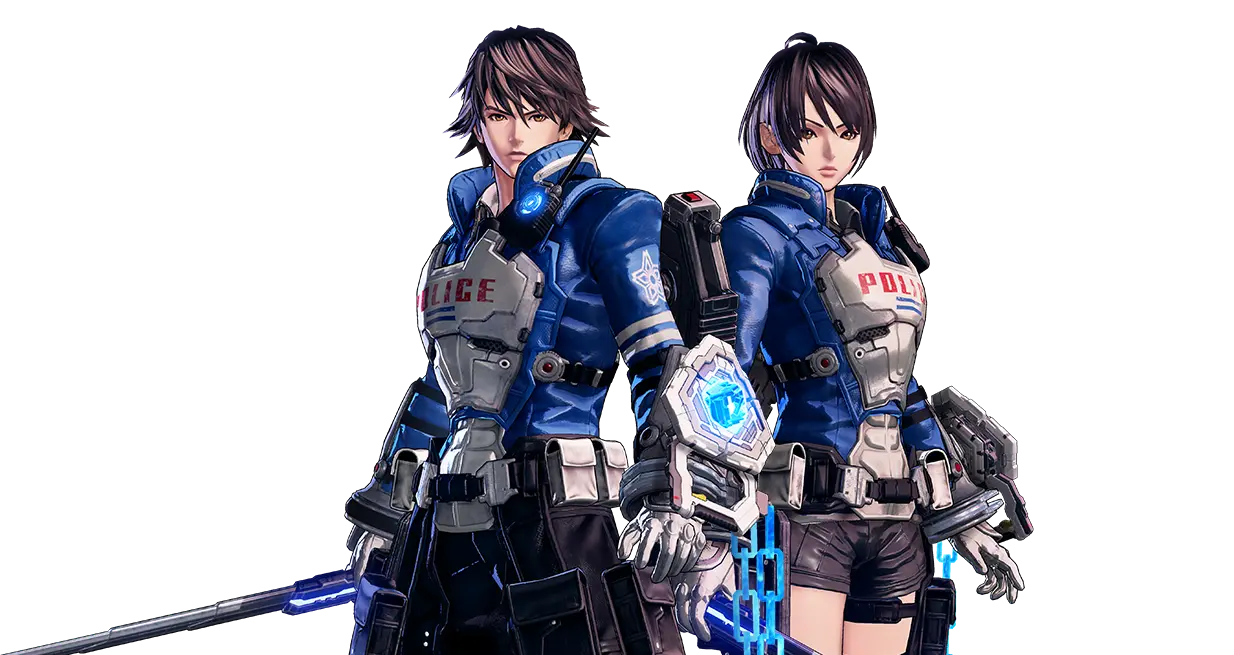 The twins. One is the player. The other a narrative device.

The game opens with a set of twin orphans, brother and sister, recruited into the Neuron ranks. Depending one which of the pair the player selects, one will be the main character with a name of the player’s choosing, and the other will be a non-playable character called Akira. When disaster strikes and the majority of Neuron loses the ability to control Legions, this twosome becomes the last hope of the last hope, running point on missions to investigate Chimera activity, rescue citizens captured by enemy forces, and investigate threats both alien and human. Being on the brink of extinction does strange things to people. 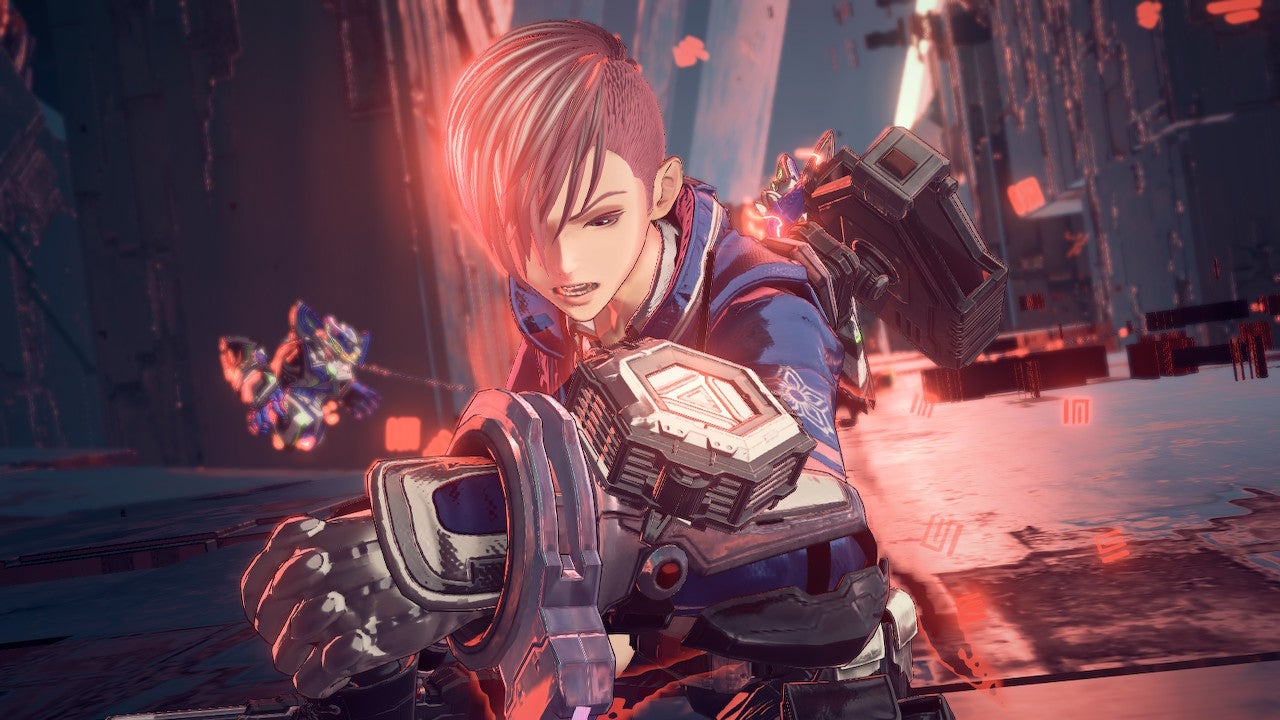 Character customisation let me make the same character I play in every anime-style game!

From that basic premise, Astral Chain’s narrative slowly unfolds over the course of 11 chapters, here called “files.” A powerful villain emerges, threatening to undo all the good work Neuron has done. Exactly how “good” said work is eventually comes into question. The mystery of the Chimera creatures plaguing humanity is explored. There are a couple of surprises in the game’s story, twists that caught me off-guard, but nothing too convoluted. It’s an anime-style game with an anime premise and anime-quality writing. 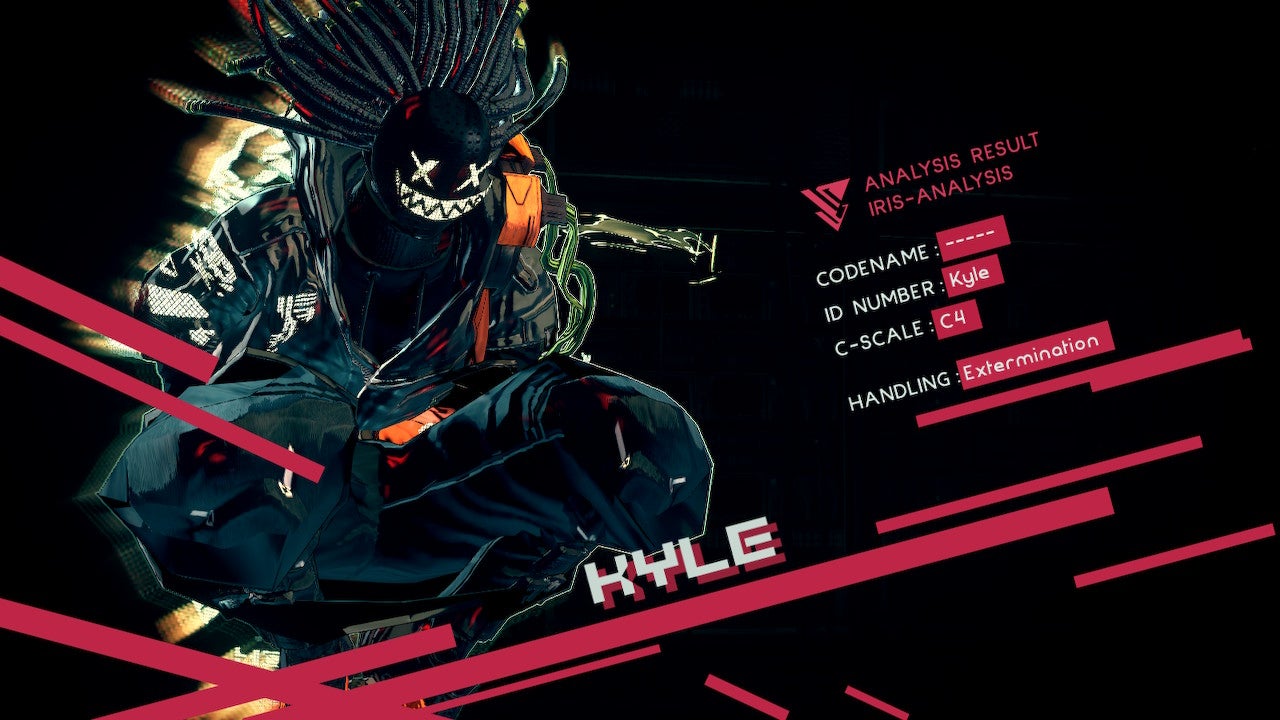 Satisfying combat and a well-crafted story are all a basic action game needs. Throw in gorgeous characters designed by manga artist Masakazu Katsura and a slapping soundtrack and you’re done. But again, Astral Chain is more than a basic action game. The fighting and fiction are Astral Chain’s skeleton, functional yet bony and pokey. Platinum Games has layered that sturdy frame with oodles of soft and squishy world-building, adventure-style investigative gameplay, and all sorts of optional mechanics allowing players to fiddle with fashion, take photos, or get to know their non-player allies better. It’s a plush layer of padding that turns a serviceable action game into a fully-fleshed out action-adventure.

Here’s how the average file in Astral Chain plays out. Players start off in Neuron Headquarters, a four-story fortress outfitted with a helipad, motorpool, research and development lab, medical office, training simulator, restrooms, and more. It also houses the main operations room, from which Neuron officers are deployed on life-and-death missions, but that’s for later.

I like to kick things off by talking to every non-player character in the office. Some of them will chit-chat. Others will have optional missions, like delivering an item to another character or carrying a teetering stack of supplies to their destination. As I talk to everyone I make sure to take photos of them all with the in-game camera, because taking pictures unlocks character bios, giving me important details and backstory. 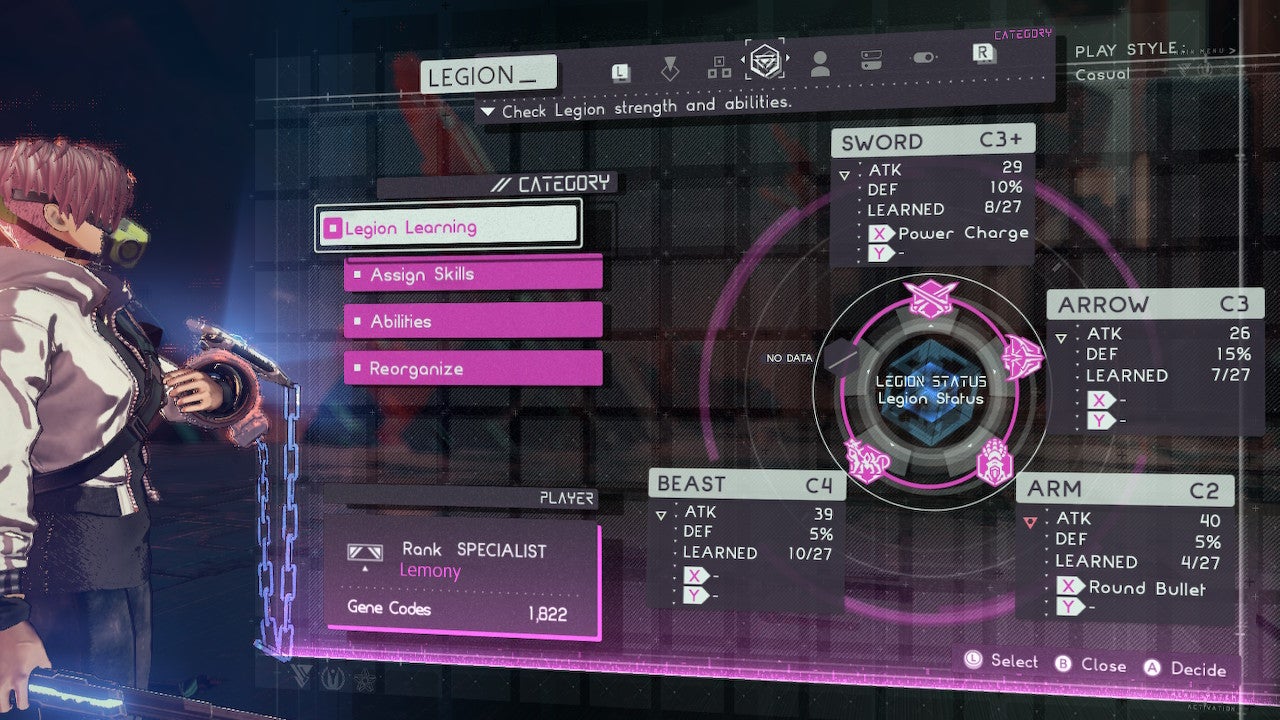 Do you like stylish menus? Astral Chain rewards players with the ability to change menu colour and opacity. Yes, I said rewards. Happy birthday, have some awesome utility.

Then I check the Orders menu. Orders are tasks players can perform that reward them with upgrade or cosmetic items. Completing game files, putting points into the talent trees of my collection of Legion weapons, performing side quests — all of these actions unlock rewards. There’s even a set of Orders that ask me to take pictures of certain characters and places using the aforementioned in-game camera.

Speaking of upgrades, I then head down to R&D to use material rewarded or gathered while out in the field to upgrade my baton and my Legatus, the device used to control Legions. The baton is a weapon that can transform between a quick staff, a slow and powerful blade, or a ranged pistol. It’s very handy. I generally pop into the Legion upgrade menu while in R&D as well, unlocking and assigning skills for my captured creatures. While the player starts with just one Legion, eventually they gain access to five, each with their own unique abilities and fighting styles, so it pays to stay on top of upgrades. 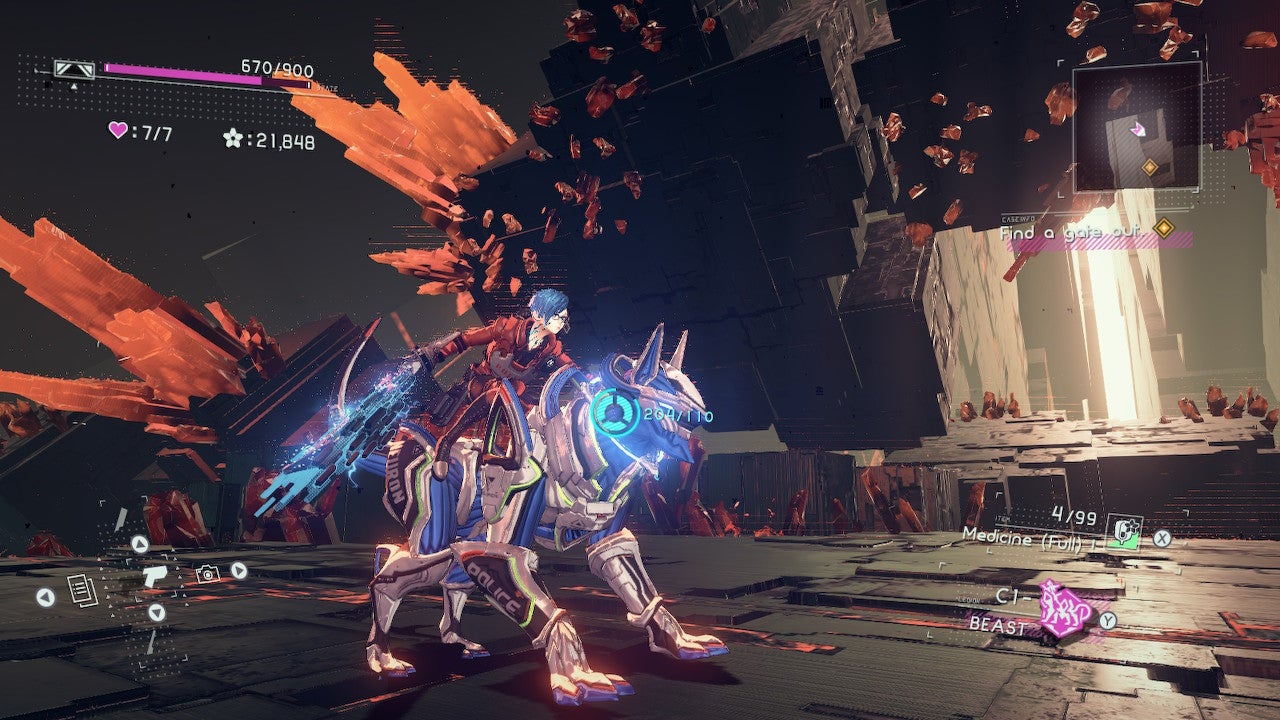 Here we are on the astral plane, riding our pupper like a horse. Platinum could have stopped here and the game would have been fine.

I stop by the locker room to change clothes, one of my favourite things to do in a video game. Astral Chain features a nice selection of clothing items and colour schemes to customise the player character. There are hats, glasses, masks, and more. I can change my character’s hair style and colour as I please. I spend a lot of time in the locker room.

Eventually, I head to the roof or the garage to deploy on whatever urgent mission I was briefed on when the file began. It’s just that there are so many other activities to participate in, and I don’t want to miss anything. 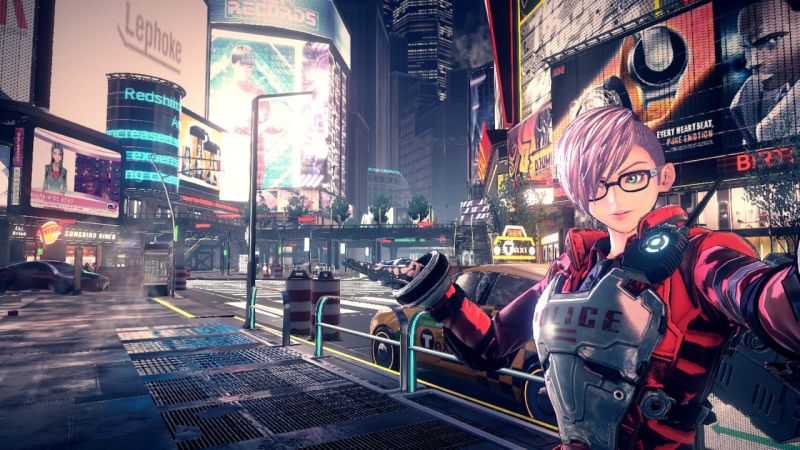 Make sure you have plenty of room on your memory card before playing. I took hundreds of screenshots.

The distractions from battle continue once deployed to the sprawling streets, sewers, and slums that make up the Ark. The last bastion of humanity is colourful and teeming with life. People walk the streets bathed in the glow from neon signs, because we’ll stop buying shit when we’re extinct, dammit.

The citizens of the Ark are witnesses who help Neuron with investigations, providing important keywords and phrases for our police cluebooks. Many of the game’s files involve an element of detective work, tracking down enemies or rifts to the astral plane before getting around to the fighting. Citizens are also a source of side missions, further distracting players from the combat that many assumed the game was all about. 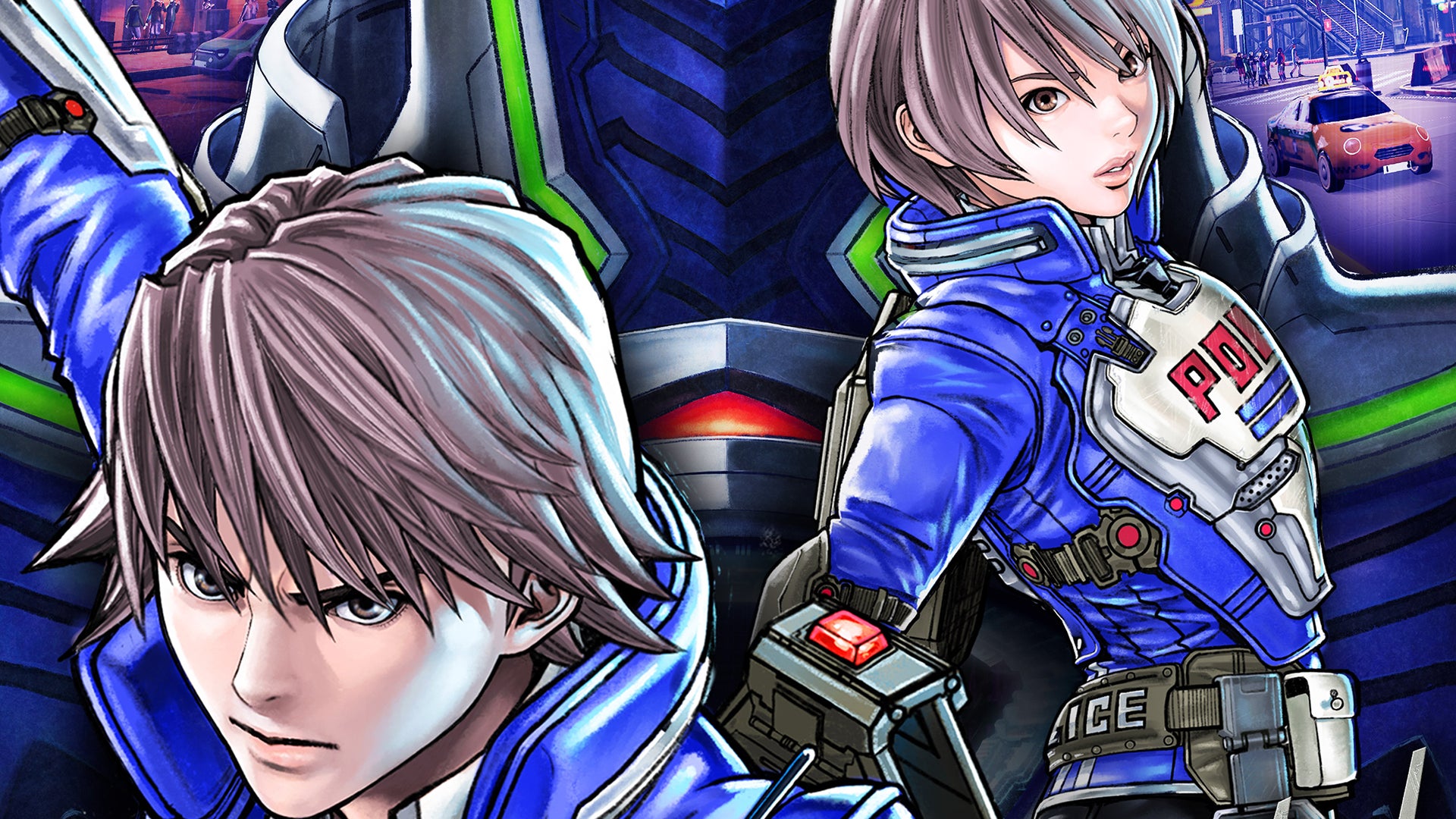 More personality and world-building than I expected, cool characters I want to know better, wicked style.

The story isn't as cool as its characters and action.

Completed the main game and tons of side quests and optional content in around 18 hours. Replaying through files on higher difficulty to level up my Legions, complete optional cases, and unlock more clothes.

Even when deep inside the astral plane, the home realm of the bizarre creatures seemingly hell-bent on our destruction, there’s more to do than just fighting. The crimson-coloured astral plane is a convoluted space, filled with secrets to discover and obstacles to be overcome by clever use of each Legion’s special abilities. The Arrow Legion can activate switches from afar. My very special pupper, the doglike Beast Legion, can track scents, dig up buried objects, and act as a mount when the player needs to go fast. The Arm Legion, named for its massive appendages, can open heavy doors, slide blocks, and manoeuvre platforms. Expeditions into the astral plane are as much about puzzle-solving as they are fighting Chimera.

I guess we should talk about this action game’s action. It’s quite nice. As the player character I swap between my baton’s basic, heavy sword, and gun modes, dealing damage near and far, fast and slow as I see fit. I dodge enemies’ attacks. I counterattack. By myself, battles are a bit basic. But I am hardly ever alone in Astral Chain.

While I battle, my chosen Legion battles as well, attacking with sword slashes, claws, arrows, punches, and mighty axe swings, as applicable. With the press of a button I can send them charging at a specific enemy. With another press I can follow them, doing damage to all enemies in my path.

I can hold down the left trigger on the Joy-Con and directly control my Legion, wrapping them around enemies so the chain connecting us binds them in place. If my Legion and I are placed correctly we can lariat certain charging enemies with the chain, sending them flying as if launched by a slingshot. It’s fast and frantic and highly enjoyable. Not so enjoyable that I miss it when battles end and I’m back to exploring and investigating, but enough that I’m never frustrated when enemies appear.

Looking back now that I’ve finished the game, there’s not really all that much fighting in Astral Chain. There are plenty of small, short battles and quite a few fights against massive, creepy-looking bosses monsters. I’m not saying that fans of Platinum Games’ signature action will be disappointed. I’m just saying that more than half of the 18 hours I spent completing the game was spent exploring, solving puzzles, taking screenshots, collecting cats, and occasionally dressing up as a Neuron’s quirky dog mascot. 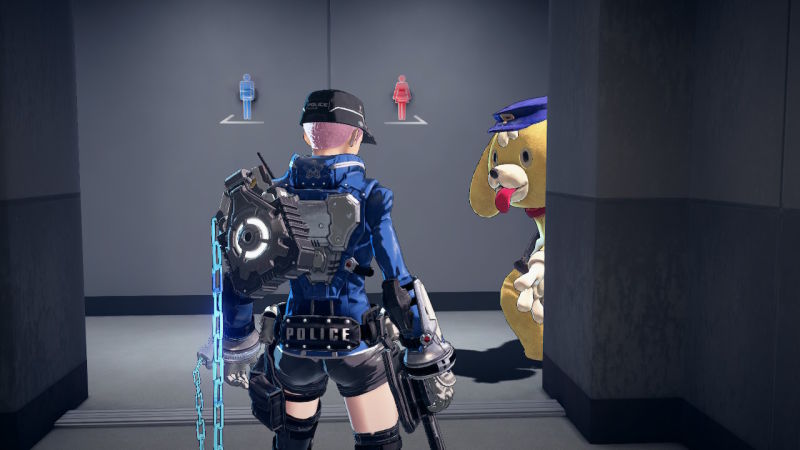 Welcome to the bathroom.

I came into Astral Chain expecting a nice action game with a pleasant anime aesthetic, a a scoop of ice cream with a cherry on top. Platinum Games gave me a giant sundae piled high with whipped cream and sliced fruit and chocolate sauce. And nuts. Pecans. Love those pecans. What I wanted is there, and it’s good. There’s just so much more, and I love it all.