Creature In The Well is a wonderful concept that had its hooks in me from the opening moments. Unfortunately, over time, it starts to revel in its cruel difficulty in ways that dry up a lot of the fun. But there’s still so much to love about the game that even if it tests the limits of my patience, I still can’t let it go.

Check out the video to see how the game plays and hear my thoughts. I’ve also included the video transcript below:

Creature in the Well’s formula follows in those same “I-can’t-believe-there-aren’t-more-games-like-this” footsteps. It takes a simple but deep mechanic and then throws a million obstacles at me in various conditions. It lets me hone my skills while I wade through a simple narrative that keeps me engaged.

Creature in the Well follows BOT-C, the last of a group of robot engineers. They wake up in the midst of a nasty sandstorm and take it upon themselves to restore power to a giant facility to provide shelter to a nearby town. The facility has been completely taken over by a huge creature who dwells in the shadows and has disabled power in the entire place.

This creature has made that facility its home and has booby-trapped rooms in an attempt to thwart any intruders. It’s up to you to restore power to these rooms, one by one, by batting around electrical balls inside to ricochet them off of various surfaces: walls, bumpers, and turrets.

You collect a special currency along the way that lets you open even more doors. This series of tasks sets up a great feedback loop that includes one of my favourite animations in a game in recent memory. It’s hypnotising to see the final core of a room get exposed and watch the balls get pulled into its gravitational pull as it bounces until it has completely transferred over its charge.

As you move from room to room, you clear reflex-based puzzles that require you to master your three main skills: a dash, a charge-up ability, and your handy swing. A helpful dash lets you get out of the range of mines that can be tripped by the same balls that you’re smacking around the room. Holding down the dash button also allows you to sprint in case you need to book it to safety.

The charge ability lets you tee up balls to send in any direction you please. It can also be used to “catch” balls so they don’t run the risk of tripping mines or hitting bumpers that will reset puzzles.

The swing move is arguably the most important ability in the game. At times it can be used as a tee’d up precision shot, or as a defensive manoeuvre to beat back any incoming fire.

Picking up different charge items make a huge difference. Certain charge items allow you to recover health from balls that transform into harmful projectiles. Others can give you a helpful visual line that aids in accuracy.

Certain strike tools like the focus hammer slow down time just a hair so that you can time return serves with precision. 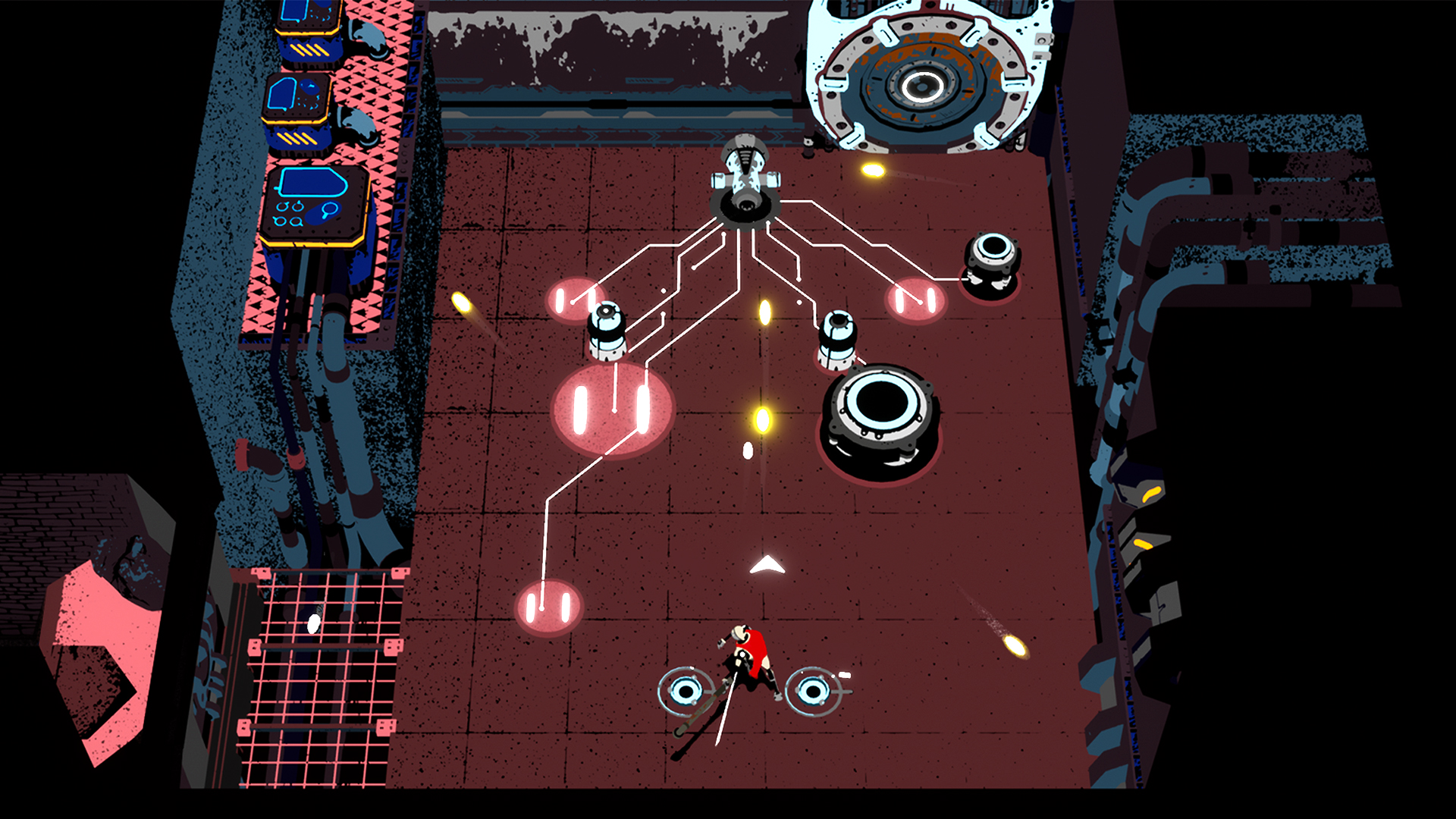 So far, each of the dungeons I’ve played feels like a masterfully crafted Swiss watch, with rooms full of enemy projectiles that float or zoom towards you, requiring an Ikaruga-style awareness as you juggle dodging incoming fire and charge up shots in time.

Sometimes it feels like a mixture of pinball, baseball, racketball and hockey as you return volleys and dash to catch incoming shots like a goalie.

If you rack up enough energy, you can spend it on unlocking doors that reveal progressively trickier designs. Most rooms can just be reset or farmed for a ton of points. As a result, I never felt like I was stuck. If a challenge got to just be too much for me, I would just move on.

Some rooms, which you’ll eventually learn to spot, will have extremely difficult challenges that, once completed, will unlock “secret paths.” In these secret paths lie new weapons or even robot cores which let you upgrade how many balls you can charge up before a swing.

But here’s where the game has been slowly breaking my heart, and what once was shiny has begun to rust a bit.

The game is brutally difficult.

Don’t get me wrong. I adore a good challenge. I’ve enjoyed games like Celeste or Sekiro that punish you for not hitting your mark. But Creature in the Well fights you at every turn. The challenges in this game are not only difficult, their punishment for failure can be a bit too harsh at times— demoralising even.

Some rooms will have targets that are on timers that are just a hair too short and require a little too much luck to clear.

Floating projectiles linger forever, hunting you down like annoying mosquitos. They even follow you into other rooms where, annoyingly, you have to then go to another area and return to make them disappear, or just try to make your way back to a ball and fumble to bat it at them.

Some boss encounters made me hold down my charge and dig my heels into the floor in the hopes of a small window for me to just catch my breath. Other fights have two mines that can be simultaneously tripped either by the creature’s doing or by my own failure to catch a ball just out of reach.

Sometimes, I died because of my own lack of skill, as a result of something I should’ve avoided. Other times, my ability to survive was just a matter of luck. Dying brings you outside of the entire facility and forces you to trek your way back to your last location.

Boss encounters thankfully have a little portal that let you jump right back into the action, but for everything else, you need to zoom through each room where each door is already unlocked. It’s tedious.

There’s a fine line between difficulty and torture, and the longer it goes on, the more this game seems to relish in the latter. Failure in a game usually makes me want to dust myself off and square up again. In Creature in the Well, I check my watch and wonder “what’s the point?”

For all of the moments of pure adrenaline pumping through my veins as I finished dunking on a boss, there are hundreds more examples of me shaking my head at the screen and just laughing in complete disbelief.

It’s the same way I’d look at a cat who just scratched me when I tried to pet them.

In this case, after pouring hours into it, the suffering just reminds me that I have plenty of other games I could play that don’t make me feel like I’m trying to thread a needle in the passenger seat of a rally car. But being the cynical, persistent fool that I am, I’m probably going to stick with it.

Even if it means me battered and bruised by the time I reach the end credits. There’s still so much to love about Creature in the Well, from the art style, the music, and even that sweet sweet level clear animation.

But for a lot of others out there, I can see the punishing difficulty being a deal-breaker. So, consider this a warning.

Creature in the Well comes to Xbox One, Switch, and Steam on September 6.