Dicey Dungeons Is A Good Entry Point For Deck Builders 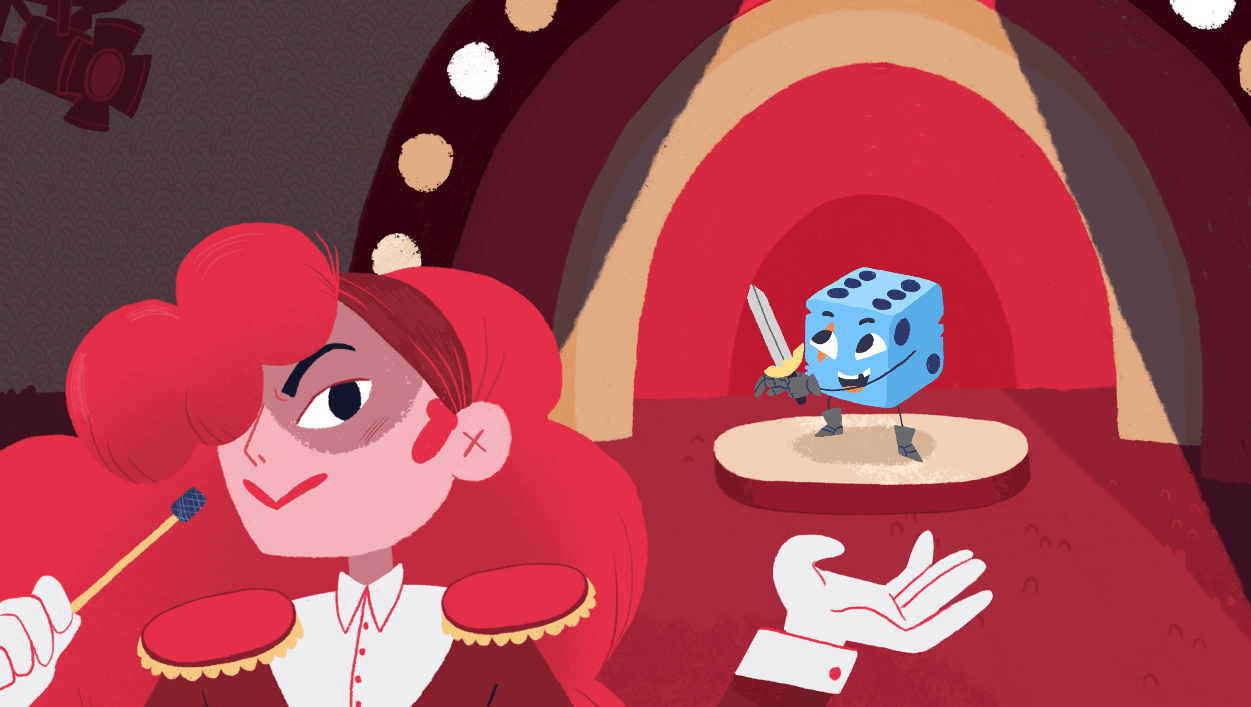 Life is an endless barrage of decisions. Some are big. Should you look for a better apartment? Most are small. Some pulp or no pulp? Sometimes it’s fun to decide. Often it’s exhausting. The burgeoning scene of roguelike deckbuilding video games is full of decision-making. It can be overwhelming. Thankfully, Dicey Dungeons, isn’t.

The newest game from Terry Cavanagh, the mastermind behind Super Hexagon and VVVVVV, Dicey Dungeons is about trying to manage the chaos of random dice rolls to survive as long as possible. You can play as a number of different role-playing game-inspired archetypes — the warrior, the mage, the rogue — each with a unique toolset that forces you to try and optimise in different ways.

Do a good enough job and you’ll make it to a final boss. Beat them and you’ll get to embark on a new journey through a new labyrinth of rooms governed by slightly different rules. The game came out this week on PC, and it’s already managed to colonise a small corner of my brain. 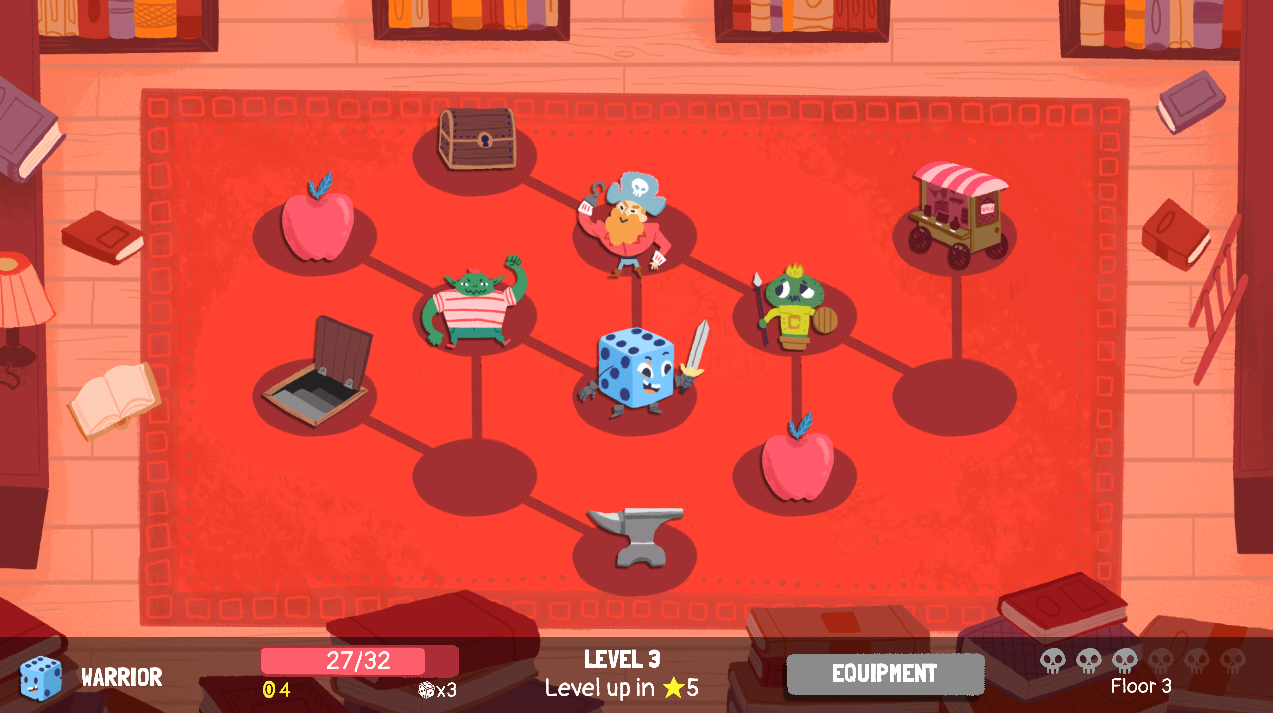 While on the surface it seems to have the most in common with games like SteamWorld Quest and Slay the Spire, its smaller dungeons and bigger focus on moment-to-moment decision making during battle makes it feel more in-line with the maths-based puzzle game Threes!. You’re only presented with a few options at any given time, whether that’s deciding to fight an extra enemy to get to a treasure chest or how to mix and match the three dice you’ve rolled with the three cards you have.

The game’s presentation is deceptively child-like, more in the vein of what you’d find on on Nick Jr. than in many of the other roguelikes it keeps company with on Steam. Dicey Dungeons takes place within the Crayola-coloured premise of a game show where people get transformed into dice and then sent to battle other strange creatures in a series of underground chambers.

There’s a guy with a stereo for a head who will shock you with electricity. There’s a jacked snowman who pummels you with snowball attacks. Beneath the whimsical appearance it’s all business, asking you to make the best out of bad situations with the dice rolls you have in front of you. 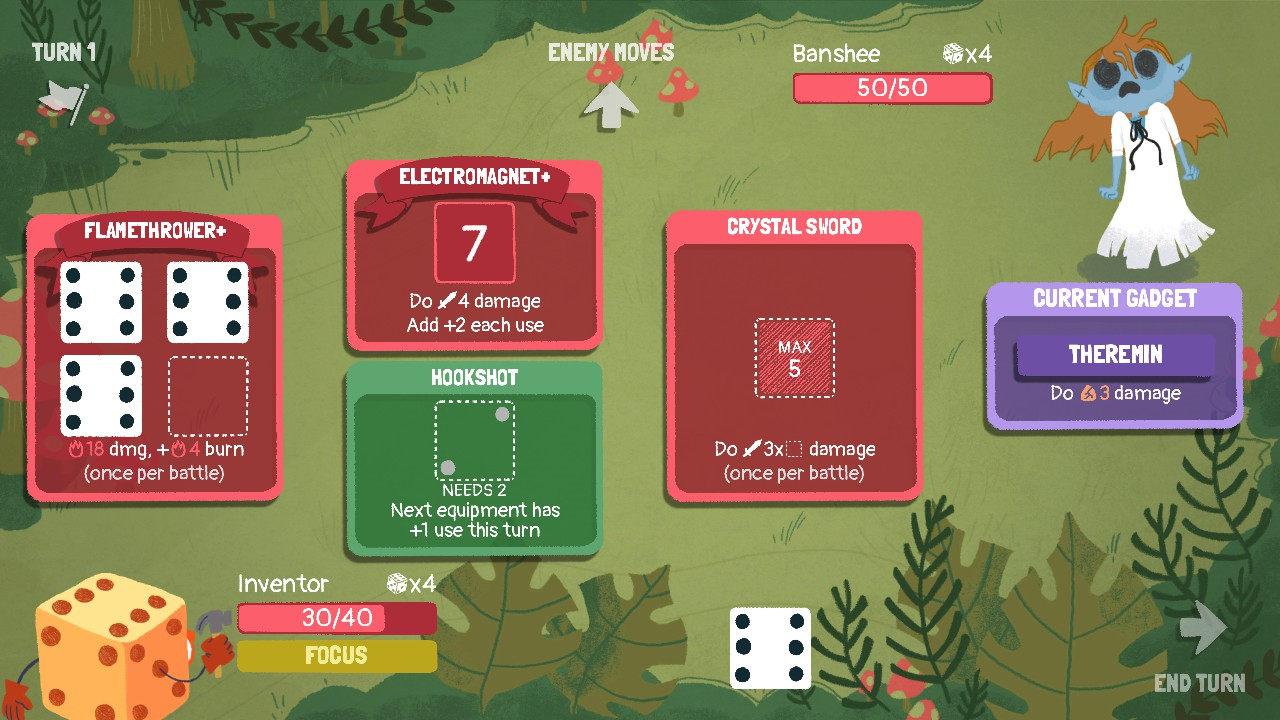 Battles are turn-based, and at the start of every turn you roll a certain number of dice depending on your character and their level. These dice, with rolls between one and six, can then be used to trigger abilities based on the cards you have equipped.

The warrior’s regular sword card does damage equal to the die you put on it, while the crystal sword card does three times the damage of the die you put on it, but only dice with rolls of five or six can be used to trigger it. At the end of the fight you’ll get gold, which can be spent on purchasing new cards or upgrading existing onesl. Defeating enemies also earns experience points which help you heal and add extra dice.

Some cards heal, others provide you a protective barrier, and a handful produce elemental effects like freezing an enemy or burning them. Some of the more advanced cards allow you to manipulate your existing dice rolls, duplicating them, dividing them, or combining them together depending on what will allow you to make the most of your other abilities. In this way, the game allows you to try and make your own luck. 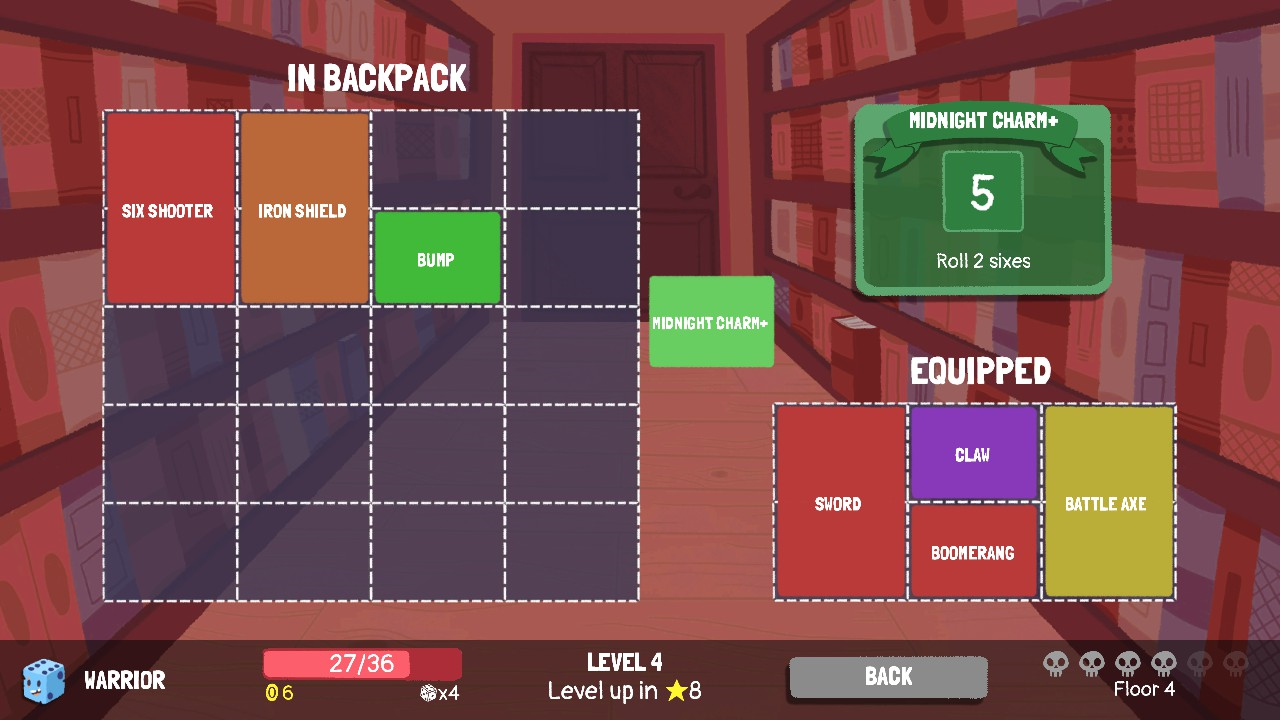 Most games have trained us to think that the bigger numbers are always better. But in Dicey Dungeons that’s not always the case. Rolling three sixes might be great if you have three crystal sword cards, but more likely than not you’ll have a healthy mix of attack and support cards, all of which require a different mix of dice rolls.

Finding the best way to deploy them, causing a mix of damage, status ailments, and extra defence, is what the game is really about. Where traditional deck building games revolve around trying to manipulate the odds of pulling out the right card at the right time, Dicey Dungeons encourages you to find synergies based around the known and stable odds of the six-sided die.

There’s not as much room for grand strategy in Dicey Dungeon as in other deckbuilding games, but that’s part of the game’s charm. You don’t have to craft a master deck from scratch as you fight through a dungeon. The dice do most of the work for you, leaving you free to mix-and-match them as best as you can.

In that regard, Dicey Dungeons is a lot like playing Dungeons & Dragons-themed Yahtzee, challenging me to make a series of decisions whose stakes aren’t too big and in fact feel perfectly suited to anthropomorphised dice performing on a gameshow.