There has never been a video game checklist that I didn’t simultaneously love and hate. The Explorer’s Shores islands found in Dragon Quest Builders 2 are chock full of them, and I could not resist their siren songs. They led me to mini-adventures that were fun and mildly frustrating, as well as an absurd encounter with a foolish animal.

The sequel to the 2016 block building RPG—think Minecraft gameplay, but with a hefty story focus—is a ton of fun. The game, which was released last month for PlayStation 4 and Nintendo Switch, has a story that is a blend of hilarious, heartwarming and surprising, along with heartbreaking moments.

As with other games in the Dragon Quest series, the NPCs shine here, too. They’re craven, rude, and blessed with funny dialogue. Some of the animals you can befriend in Dragon Quest Builders 2, however, are not as clever.

In Dragon Quest Builders 2, your character goes on seafaring adventures from their home, the Isle of Awakening, in search of materials to build up their base. Doing so takes players to other lands where major story events unfold. But one of the things I really looked forward to was going on scavenger hunters on smaller islands called Explorer’s Shores to unlock unlimited, specific item resources.

Going on an excursion to these Explorer’s Shores islands presents the player with a checklist of items to identify and catalogue. The islands are home to monsters, as well as building blocks and materials players have access to at various parts of the story. They’re good for farming various materials but they also offer permanent rewards. For instance, silver is a key item on the second big main story location, and players can earn an infinite supply of it on a specific Explorer’s Shores island called Iridescent Island.

But there’s a catch: it only unlocks if players can find every other item on a checklist for Iridescent.

Explorer’s Shores islands vary in climate, terrain, and supplies. Each contains different resources too, and not just the ones featured in main story quests. Some islands offer the chance to collect new seeds and plants for agricultural purposes, new residents, and animals that players can befriend to whisk away to the Isle of Awakening to live. 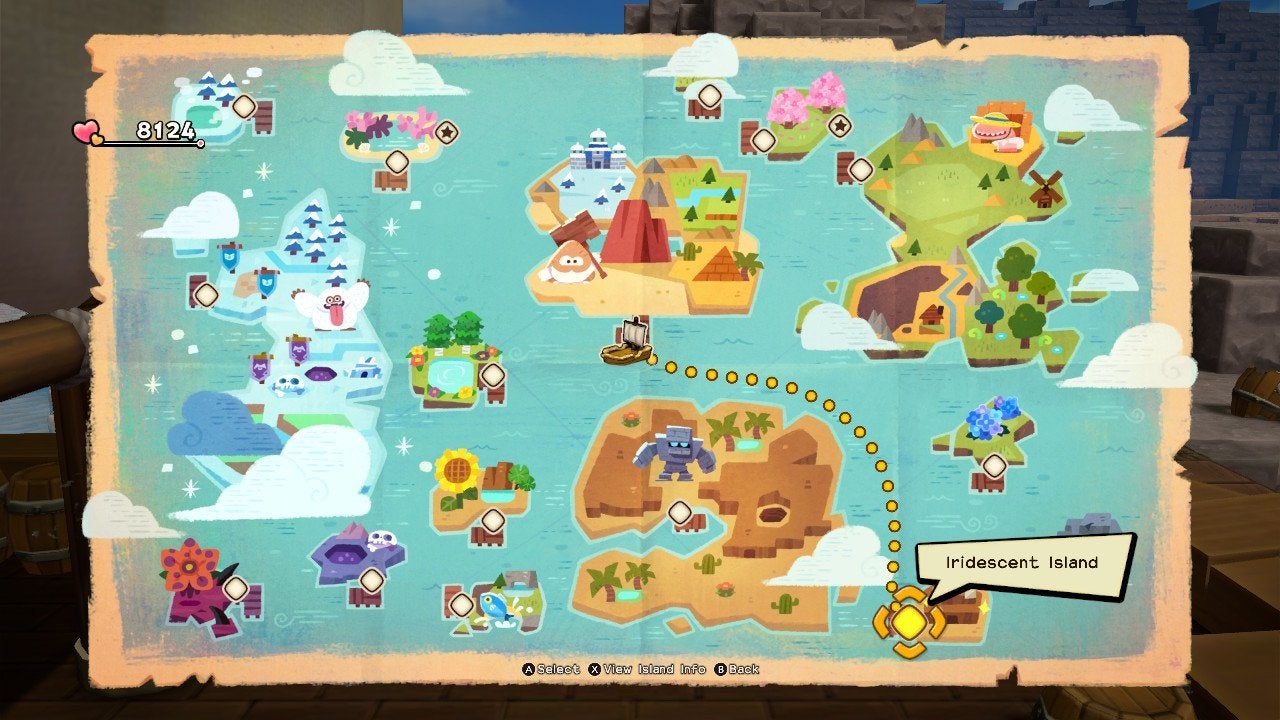 As an in-game item hoarder, there was nothing more satisfying than going on a hunt for materials in Dragon Quest Builders 2, finding them, and watching a small check mark pop up next to it on my checklist as proof of my success. While the process could be quite tedious at times, there was something delightful about the things I found, and where I located them.

Sometimes the game forced me to go deeper inland to find that last item on my checklist. As I discovered one evening, this was quite an annoying endeavour. But that was part of the thrill, too, as there is no save option on Explorer’s Shores. Additionally, leaving the islands and returning means you have to start searching all over again as their layouts are randomly generated. [Updated for clarity at 12:53 p.m.: the island resets once you leave and return but you only have to search for remaining items on your checklist if you didn’t find them before leaving.]

I set up personal challenges for myself to see how quickly I could explore, and what risks I was willing to take before calling it quits. For me, Explorer’s Shores’ biggest rewards are the animals you can befriend. Thanks to the monsters that inhabit the islands, this proves slightly more of a challenge. If an animal gets scared, it will run off. It has to calm down before you can sneak up on it and attempt to befriend it again. Sometimes the animals are targets of aggressive monsters which can turn the task into a rescue mission.

That’s not even the worst part. If an animal joins your team, it’s then up to you to keep them safe. This is where things can become troublesome.

On this particular evening, it was late and I needed to go to bed. But I had checked off so much of the list that I only needed three more things from Iridescent Island. So, of course, I pressed on instead of being sensible (I also realise I could have just put the Switch into sleep mode but that would be too easy). How hard could it be? Quite, actually, when there’s an idiotic in-game cow involved.

I had to search high in the blocky mountains for ore, gems, and green dye. It is also important to note that Iridescent Island is volcanic, and parts of the ground are lava. On my way to a high mountaintop, I spotted the native island’s animal—a cow—well below my position, near the shoreline. As it had taken me forever to climb up high, I decided to retrieve the cow after securing whatever mineral I was after. Having completed my task, I went back down to find the creature and found, in its stead, a cow’s skeleton. 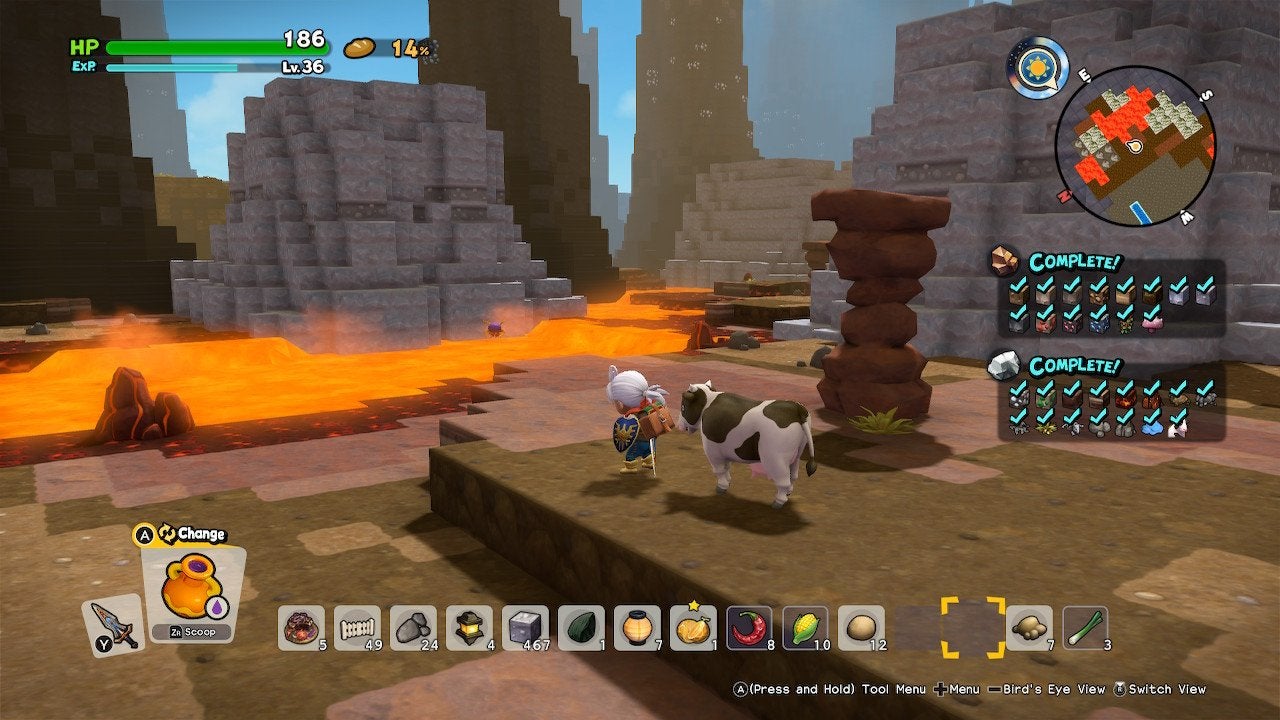 Look at all the things I found. And a cow that liked the lava way too much.

With two items left—green dye and a cow—I went back to climbing. Along the way I battled a golem who almost killed me. Then I laid eyes on it: a new, very-much-alive cow. It was hanging around a lava pool, of course, because I have surmised that Dragon Quest Builders 2’s cows have a death wish. I tried to approach it but had to save its life by pouring water over the lava it tried to walk into.

This set off a chain reaction of the cow being scared by my presence, and it trying to run headlong into the lava for a gruesome, scorching death. Enemies surrounded us and began attacking, too, but somehow, I managed to befriend it and escape. My worries did not end there.

With green dye on top of a nearby mountain, which was also surrounded by lava pits and monsters, I had to make the decision: risk taking the idiot cow with me to the top of the mountain, or get the cow to safety by leaving the island and returning at a later time, on my own, to procure the dye.

I decided to be a daredevil but I am happy to report that it all worked out in the end. Things did get dicey but the cow, the green dye, along with some new residents, all made it back safely to the Isle of Awakening.

I had a few more moments of despair on other islands trying to find items for different checklists as well but I couldn’t help but conquer them all. The simple joys of exploring, finding new plants and animals, and building materials, was a lure that proved greater than the occasional aggravation the Explorer’s Shores islands presented. 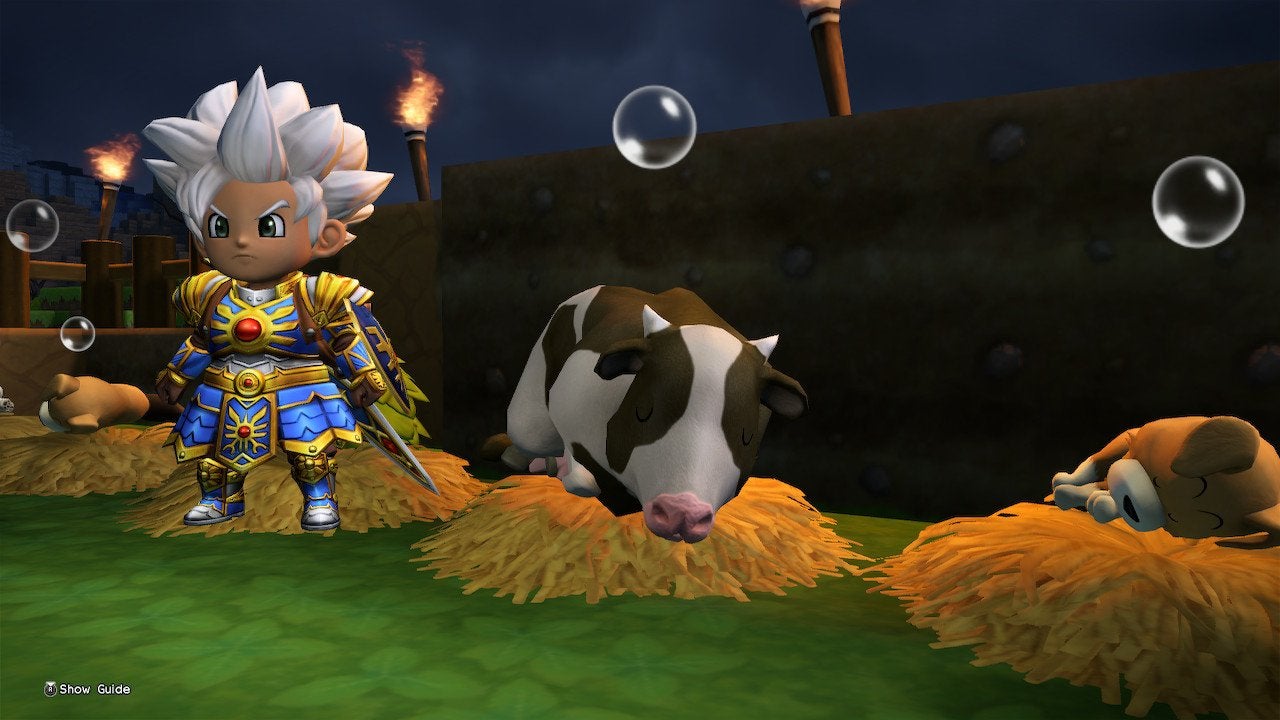 That’s what video game checklists, sidequests, and scavenger hunts do: If they’re right in front of me, I can’t help but want to complete them. I’m usually not one to finish every task in a game but Dragon Quest Builders 2’s Explorer’s Shores islands were worthwhile incentives for budding builders such as myself.

It was exciting collecting things to make my hometown feel more lived-in, busier, and look more pleasant. I relished the chance to set sail on the game’s “eleventy seas” to see what I could bring back.

As for my cow, it almost got killed by some low-levelled monster ants on the Isle of Awakening because it decided to roam the outskirts of the village, and climb up the surrounding cliffs where no one had eyes on it. I wised-up and built an animal house and pen for grazing so it will not be wandering again.

The entire experience made me question if I should return to Iridescent Island for more cows. I eventually did. But I really should not have had.