Everything You Need To Know About Eisenhorn, The Peculiar Star Of The Live-Action Warhammer 40K TV Series

The fact that it’s somehow taken until 2019 for Games Workshop to attempt to bring the rich, ridiculous fiction of its grimdark Warhammer 40,000 universe to live-action is peculiar enough. That Gregor Eisenhorn is the face of that long-awaited push, even more so. Need a quick trip to the Black Library to brush up on him? We’ve got you covered.

Games Workshop’s tabletop universe is filled with all sorts of over the top alien races and evil forces. It takes place in a far-future setting where humanity stands on the brink of annihilation, as the dwindling empire established by its immortal emperor eons prior is slowly picked apart by alien invasion, chaotic corruption, and all sorts of other nasty things you’d expect from a world that helped christen the term “grimdark” in the first place.

In the years since 40K rolled onto the tabletop scene in the late 1980s, Games Workshop has expanded the world of Warhammer across not just the actual tabletop game and its myriad spinoffs, but in all sorts of tie-in fiction, from the rulebook “codexes,” to articles in its monthly magazine White Dwarf, to yes, the aforementioned Black Library, the company’s book publishing branch that has been churning out novels set in the universe (and its fantasy sibling setting, previously known simply as Warhammer, now known after a 2015 reboot as Warhammer: Age of Sigmar) since 1997. 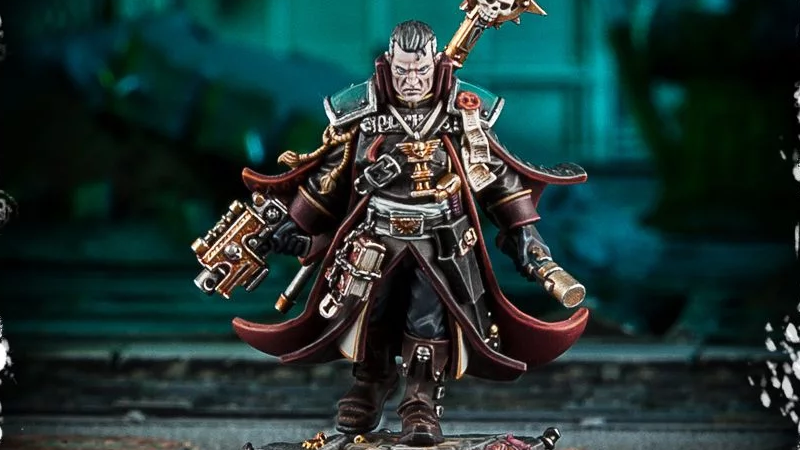 It is at Black Library rather than on the meticulously-flocked battlefields of the miniatures game that we actually met Gregor Eisenhorn, who’s since gone on to not just star in his own series of books and short stories, but actually become one of Black Library’s most beloved characters — and yes, make it on over to the tabletop game with his own special miniature, released as a celebration of the Black Library’s work last year.

But if you’re unfamiliar, to first understand just who Eisenhorn is, you also need to know about the general state of humanity in 40K’s world.

No, He’s Not a Space Marine!

You might, with fair judgement and only a passing familiarity with 40K, make the assumption that Eisenhorn is a Space Marine, the eponymous power-armour-clad warrior faction that are often a focal point of storytelling in the 41st millennium. After all, he’s a human, fighting for the Imperium of Man — that’s what those big blokes in the brightly coloured armour with chainsaw swords and guns the size of a small hatchback do, right?

Well, yes, but there’s also much, much more to the human forces of 40K than the Space Marines. They are, of course, a big part of it — they’re the most beloved and appreciated faction of Games Workshop’s tabletop universe for a reason — but all sorts of factions fight in humankind’s name in 40K. 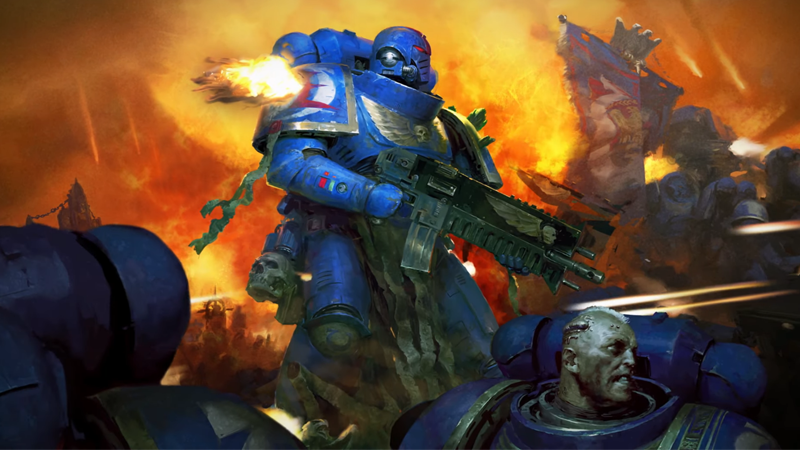 the Imperial Guard, the rank and file “normal” soldiers of the Imperium that basically exist to be fed into the endless meat grinder of war.

Beyond that, each planet in the Imperium has its own defence forces and more administrative enforcers, like the Adeptus Arbites — the judge, juries, and executioners of the state police, basically. And in the shadow of all those, there are the secret arms of the Imperium: the Officio Assassinorum, home to spies and other shady, very murderous operatives of the Emperor, and, at long last, the Inquisition. That is where Eisenhorn and his pals come in. 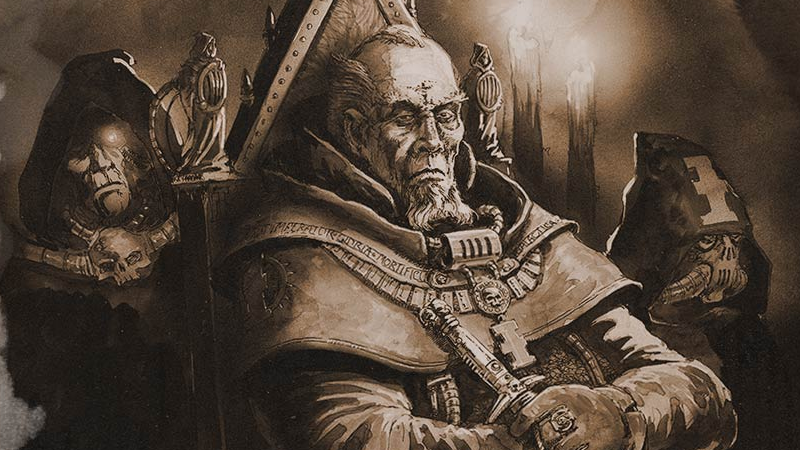 Agents of the most pious Ordo in the Inquisition, Ordo Hereticus. (Image: Games Workshop)

Welcome to the Inquisition. It Also Sucks.

As we’ve established, the humanity of 40K’s future is a society very high on its religion. They don’t call him the God-Emperor for nothing! So having an ever-present, secret-but-not-really-secret Inquisition running around scaring the bejesus out of everyone in the name of loyalty and human purity isn’t exactly that surprising.

As we’ve also established, the Imperium loves itself a compartmentalized series of factions and sub-factions, so try not to be too shocked that the Inquistion itself operates out of three primary branches, or Ordos.

First up, there’s the Ordo Malleus, which protects humanity from the scourge of the daemonic forces of Chaos. They go about hunting for cultists and practitioners of heretical arts like summoning daemonspawn, purging any heresy they find with reckless abandon. Servant of Chaos? Good, you deserved a bit of purging. Innocent? Well, know that you’re going to a better place in the Emperor’s name, trusted servant of the Imperium! (See, told you this society sucks.)

After that comes the Ordo Xenos, which is the same sort of thing but for the influence of alien factions, rather than Chaos. There are myriad alien societies in 40k — the ancient space elves of the Eldar, the insectoid hive fleets of the Tyranids, the caste warriors of the Tau Empire, the intergalactic football hooligans that are the Space Orks, and so on — all gunning to wipe out humanity once and for all.

Sometimes, attempting to do so means sowing the seeds of fealty or corruption among humankind, so it’s within Ordo Xenos’ remit to fight back against that influence, and alien forces in general. They even commandeer their own special chapter of the Space Marines, the Deathwatch, to do so!

Then we have the Ordo Hereticus, also known as the Witch Hunters. They are your sort of catch-all, Swiss Army knife of secret police. Ordo Hereticus’ remit covers the wonderfully vague concept of protecting humanity from itself — rebellious elements, rogue psykers, gene-experimenting mutants, heretics, actual witches, you name it, Hereticus hunts it. 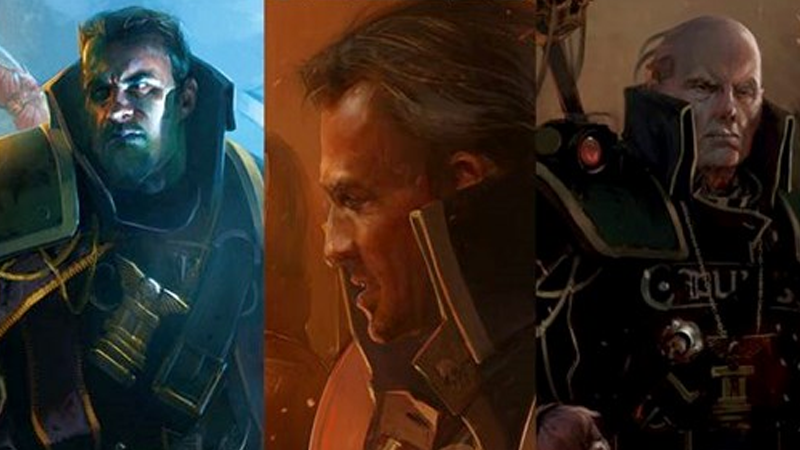 Eisenhorn in various centuries of his career as an Inquisitor. (Image: Games Workshop)

So, after all that, we can get down to the question you actually want to ask: Who is Gregor Eisenhorn?

As you may have pegged from the layers of context you just waded through, Eisenhorn is, an Inquistor — specifically, he’s one of the Inquistors of Ordo Xenos — first introduced in a 2001’s trilogy of 40K novels by Dan Abnett.

That name may be more familiar to you as the Marvel Comics writer, alongside artist Andy Lanning, behind the rebooted version of the Guardians of the Galaxy team that was translated into the wildly popular movies, but before all that, Abnett wrote, and continues to write, loads of books under the Black Libary banner.

But from his humble beginnings in Abnett’s extensive writing career in the 40K universe, Eisenhorn grew to be one of the most popular characters in the Black Library’s cavalcade of novel stars. He’s also, as with the vast majority of characters in this universe, a comically over the top badass.

Both a Psyker himself — mainly using his telepathic gifts to imbue his voice with the power to make people follow his orders — and implanted with cybernetic augments, Eisenhorn is actually hundreds of years old despite looking like a man in his 50s or 60s.

He and his retinue of agents essentially wander about the Imperium and the cosmos at large being edgy James Bonds, rooting out corruption, saving the day, and occasionally being marked for heresy themselves a few times in the process, only to be proved righteous.

A puritan in his earlier years, Eisenhorn slowly but surely began dabbling in the tools of his enemies, alien and daemonic alike, to further his abilities (hence some of those awkward moments of being declared heretical and whatnot). He did so specifically after becoming obsessed with defeating a daemonhost called Cherubael, which is probably going to form the arc any potential TV show about him takes.

Long story kept short and with the mildest of spoilers: Eisenhorn becomes increasingly heretical in his quest to defeat Cherubael, drawing the ire of his colleagues in the Inquisition and eventually teams up with — and is betrayed by, because of course — a heretic named Pontius Glaw to seal Cherubael away and bind him to Eisenhorn’s will.

He then goes fully rogue in the process of wreaking vengeance upon Glaw (who, at some point, goes from being a soul trapped in a box to a wild, knife-covered machine man…40K, everyone!). After being essentially excommunicated from the Inquistion, Eisenhorn vanished into the grim blackness of the cosmos, fading into legend and mythos, until he occasionally pops up where you’d least expect it.

The fact that Games Workshop isn’t taking the easy way out — well, “easy” in that such an endeavour would cost an amount of money to do justice that would make even the later seasons of Game of Thrones blush — by having its first potential foray into live-action with its most iconic of franchises not be a tale of Space Marines endlessly gunning down alien hordes is an interesting one.

Because ultimately, while that is indeed emblematic of what 40K is — it’s a tabletop game about rolling dice to decide just how much your Incredibly Edgy Space Dude/Ork/Monster/Chaotic Demonspawn royally smashes up your opponent’s Incredibly Edgy Space Dude/Ork/Monster/Chaotic Demonspawn — the grim dark future of the 41st millennium is so much more than that.

By framing this show around Eisenhorn — a man who goes around maintaining the fucked up hierarchy of the society around him doing foul deeds in the name of expunging threats imagined and real from it — this TV series has an opportunity to peel back the layers of over the top silliness that does indeed make 40K so much bizarrely indulgent fun, but also often masks the intriguing moral complexities around its world in the process.

All that ridiculousness is great, but the chance to do something unexpected, more intimate, and dramatic with this world is a bold one.