Finally, You Can Purchase The ‘Yellow Dog With Cone’ Statue In GTA Online

Grand Theft Auto Online players waited years for the casino to open and the latest large update finally did just that. Players have been excited. But not all was well. You see, there was still something missing. But finally, our nightmare is over. After first being teased on the official website for the newly open Diamond Casino, The Yellow Dog With Cone statue is finally available to purchase in the casino’s store.

When Rockstar first started teasing and talking about the casino update they also launched a website alongside the news. This site showcased many different features of the casino, including various table games, penthouse features and more. But one item that was also teased was that of an art piece named Yellow Dog With Cone. But when the update was released last week, some fans discovered that there was no statue available in the game. This became a meme on the various GTA subreddits and forums, even spawning the creation of a subreddit dedicated to only the yellow dog and their cone. It seemed clear that players wanted their doggo.

“Where is my Injured Yellow Dog!?!? Lol” Asked one Reddit user, after finding no dog statue. I assume the “LOL” at the end is just the way that user copes with sadness. Some folks smile through the pain.

Multiple posts popped up on Reddit and Twitter asking where the damn dog was and why the world was so awful. The reason the dog wasn’t in the game was that, as explained on the official website for the casino update, the store updates each week with new items. So the wait began. Players hoped that soon the Yellow Dog With Cone would grace their GTA Online penthouses.

“God I hope yellow dog with cone is added tomorrow,” tweeted one player as they waited for news of the updated store. 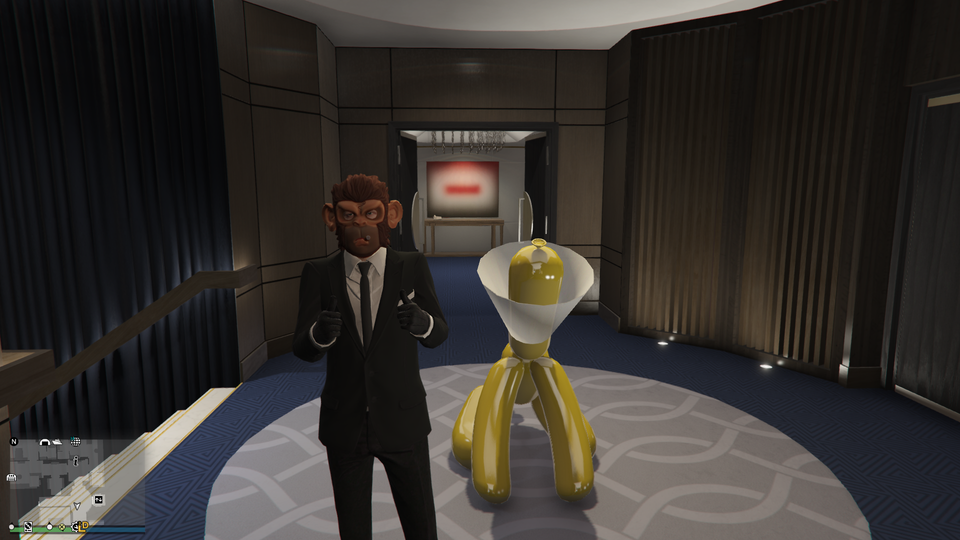 Finally, after what felt like years of waiting, fans were rewarded when it was discovered that the casino store had been updated for the new week and the Yellow Dog With Cone was one of the items available to buy.

“YELLOW DOG WITH CONE HAS ARRIVED” was the title of one of the various posts that appeared on Reddit after the dog statue was added to the game. As you might expect, players were happy and relieved to finally get the big yellow pup in their hands. “God has truly chosen us,” exclaimed one fan on Reddit.

Yellow Dog With Cone costs 41500 chips to purchase, but that seems like a small price to pay for something so wonderful and beloved. Players also found other similar statues, but differently coloured dogs. As far as I can tell, the GTA community has no feelings towards these other dogs.

After being added to the game, fans began snapping photos of their new purchases. One fan even took the dog out to the beach for a nice vacation.

For those who need the Yellow Dog With Cone in their penthouse, act fast. Once the store changes again, we have no idea when or if our neon-coloured pup will return. Don’t let this opportunity slip through your fingers.