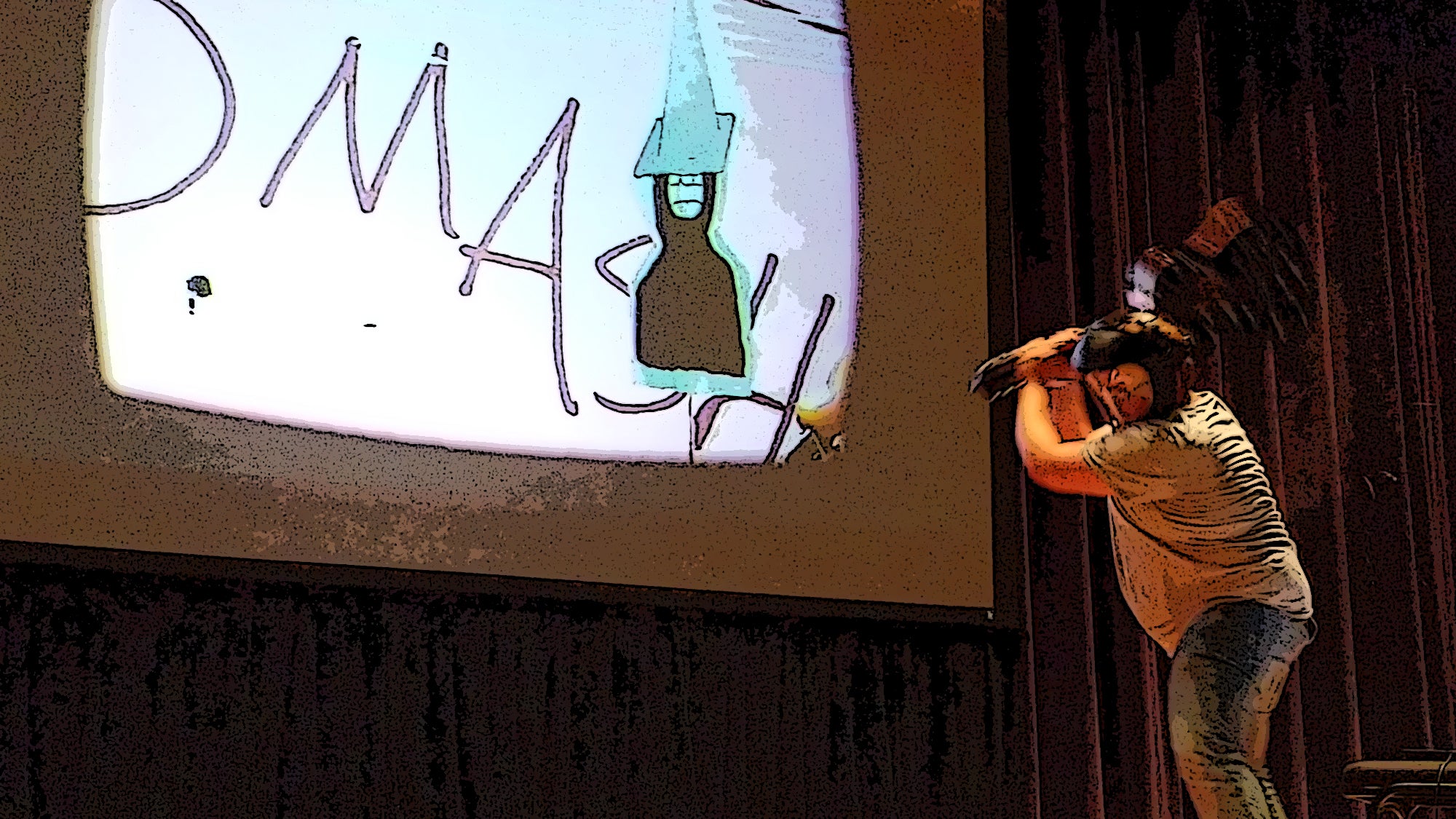 Photo: David Shimomura, Kotaku
To sign up for our daily newsletter covering the latest news, features and reviews, head HERE. For a running feed of all our stories, follow us on Twitter HERE. Or you can bookmark the Kotaku Australia homepage to visit whenever you need a news fix.

Who among us hasn’t dreamed of standing on a stage and smashing a guitar? Last weekend, a new Guitar Hero-style game let a few lucky players do just that, turning a real guitar into splinters and shards after they finished their song. Then, in one final, irreversible smash, the developers deleted all traces of the game itself.

One Night Only, which was played by just 15 lucky people at a Chicago gaming festival called Bit Bash on August 17, was born to die.

It’s not exactly rare for a video game to functionally become extinct. Though organisations like the Video Game History Foundation have made great strides in preservation, games disappear all the time. They disappear because the hardware fails, the licensing expires, or some vital piece of code no longer functions as operating systems change. But very few of them die a death as complete, or as deliberate, as One Night Only did last weekend.

Game developer Amanda Hudgins specialises in games with alternative control schemes. (Hudgins is also the managing editor of the digital magazine and website Unwinnable, to which I have contributed.) conceived of One Night Only during a cocktail party in response to an event at this year’s Game Developers Conference in March. Hudgins fired off a mid-party tweet to the Bit Bash festival asking for “a budget for a special one-night show where we smash guitars.”

“I wanted a game that was physically unplayable at the end of the night because you destroyed the controller,” Hudgins said.

“We’ve seen [games] that delete their own executable,” said Amanda’s partner Matt Hudgins, “but I think you’ll be surprised to find out how far we’re willing to go.”

On August 17, standing in the auditorium of Chicago’s Museum of Science and Industry, I was surprised. 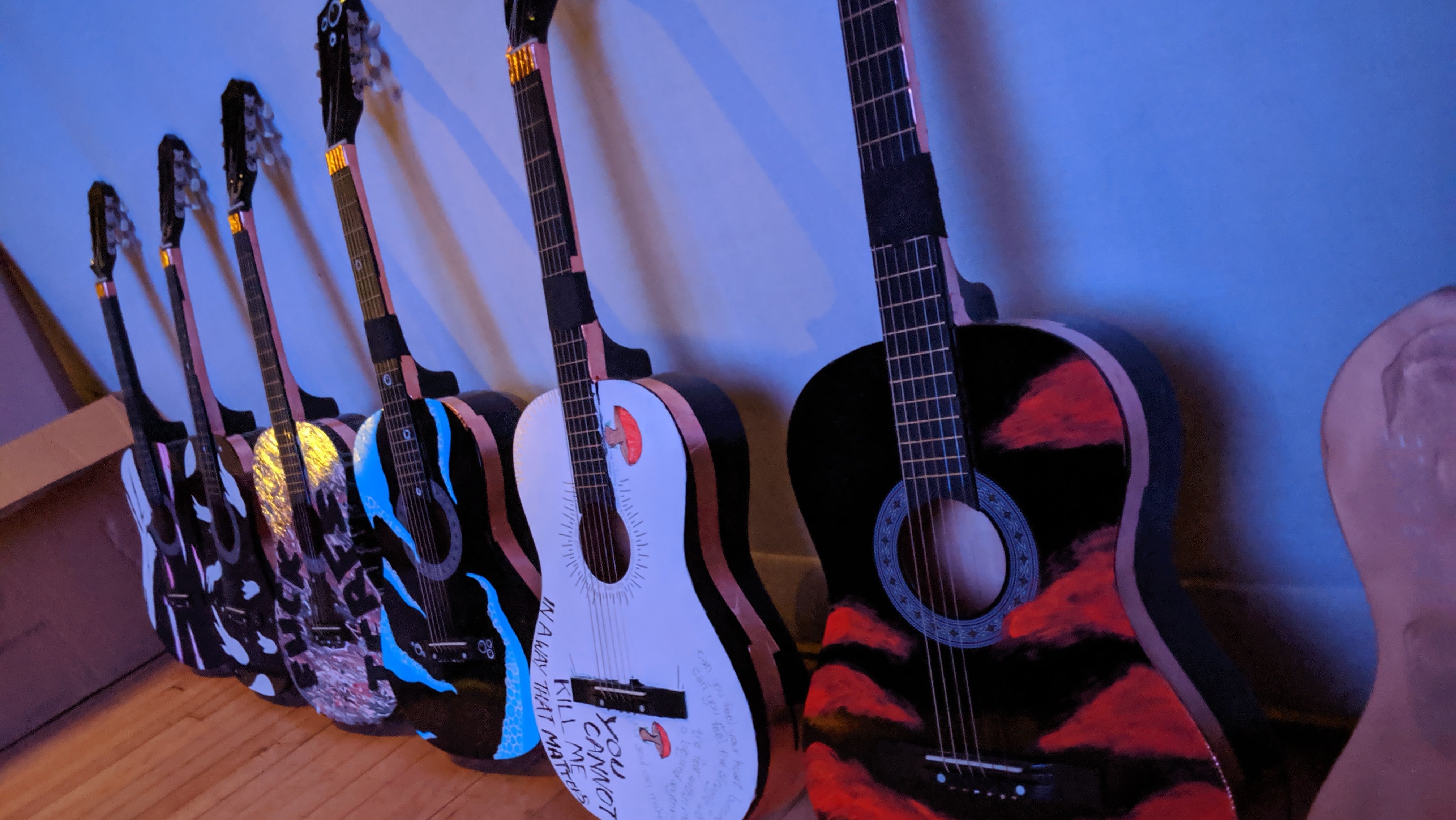 Besides having to design a playable rhythm game in just a few months, Amanda and Matt needed to figure out how to acquire a significant number of real, working, playable, but extremely budget-minded guitars.

If Amazon reviews are to be believed, the $47 ZENY 38” Beginners Acoustic Guitar is worth less than the material it’s made from. They smelled and handled like cheap carnival prize guitars, the guitar equivalent of the knock-off toys that a grandparent with poor eyesight might buy for your birthday. When Amanda and Matt placed an order for 15 of them, Amazon asked if they had a loading dock. (They did not.)

Despite Amanda’s and Matt’s assurances that these guitars were awful, barely-playable, misery-inducing props, I still couldn’t shake the feeling that it was “wrong” to break them. Especially after Matt told me that he and Amanda had custom-wired each one with capacitive leads made of copper to make them functional game controllers, which took about one hour per guitar. 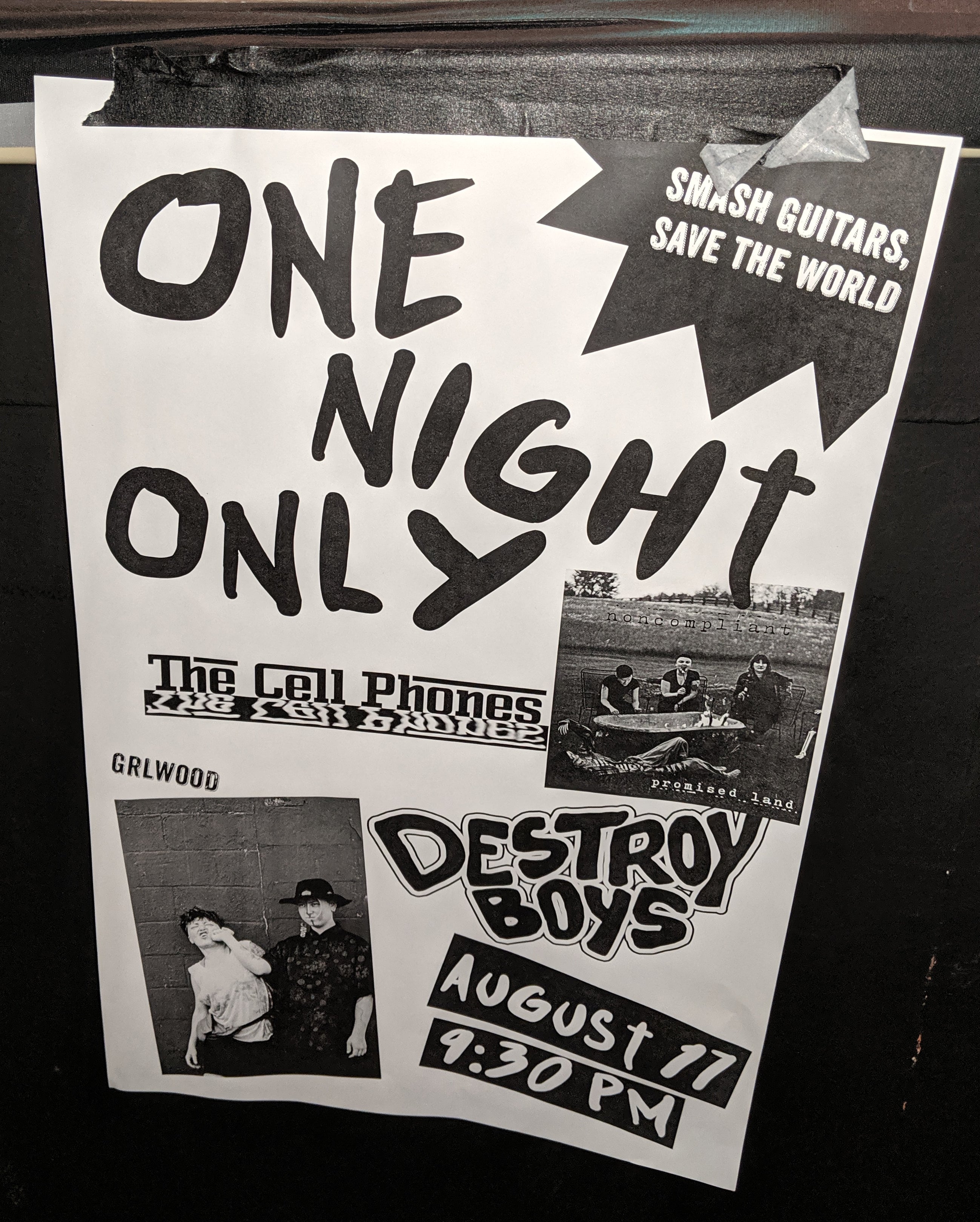 Backstage, I helped Amanda take a few of the guitars out of their boxes. They had artfully decorated each one, giving it a unique look. One paid homage to Mothman. Another was painted entirely in nail polish, a process that ended up forcing everyone to leave Amanda’s home until the air cleared.

The reborn guitars displayed a level of craft not often seen in a game controller. But they were made to be destroyed.

Throughout the night, Amanda and Matt remind attendees that any funds left over from the event would be donated directly to Little Kids Rock, a charity dedicated to increasing access to music education in public schools. I remind myself that new life and change often requires destruction. The guitars began their lives as something else, then they became guitars, and in the process of becoming splinters they’d help a child learn music. In death, they would have gone further than their sad one-star Amazon reviews would have predicted.

There’s power in live entertainment. It’s unpredictable. One Night Only was not without its fits and starts. The game had to be reprogrammed on the fly to fix one issue. I was told multiple times that the game would probably crash during the night, and it did. But the most volatile element was that guitars would be smashed.

Amanda had asked attendees to avoid sitting in the first two rows of the auditorium, which had been designated the “shrapnel zone.” But this was just a guess, as they hadn’t smashed any guitars yet. Though they were destined for destruction, the guitars were precious. Testing the game fully would have meant taking the power of a smash away from an audience member. 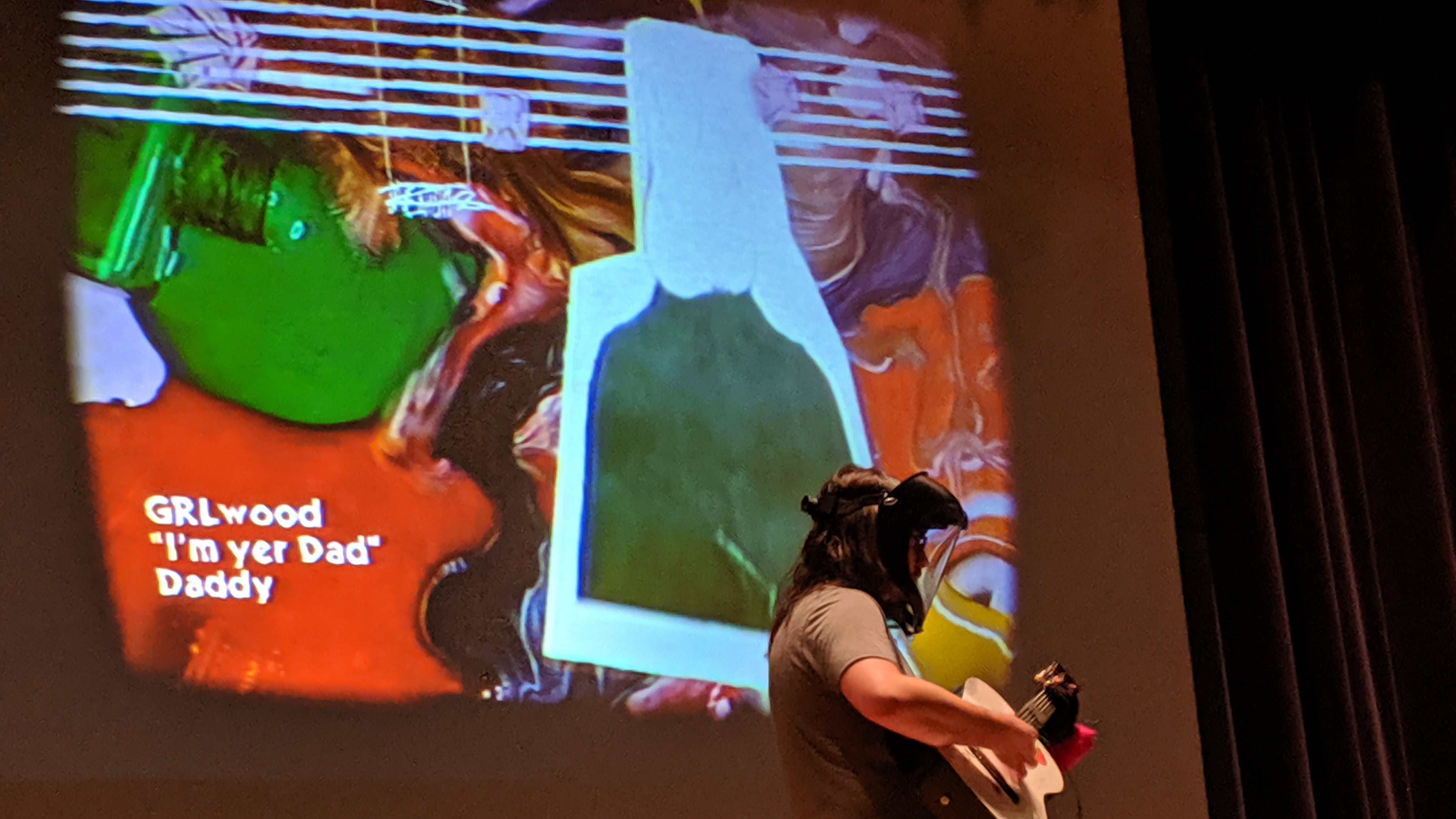 Over 100 people entered the auditorium, but only 15 could play One Night Only. Audience members were recruited based on a series of questions: Who had travelled the furthest? Who was the oldest? Who was a volunteer who had most recently undergone a break-up? As they were chosen, they were taken backstage to sign a liability waiver and put on their gear. A provided assortment of rock-star costume props were optional. A riot-police style face mask was required.

Each player took to the stage one at a time, a pink glove attached to their fret hand and a metal guitar pick in their strumming hand. Similarly to Guitar Hero, markers would slide along the screen to the rhythm of the song, and the player would strum in time. The songs themselves were loud, ragey, punk pieces by indie acts like GRLwood, the Cell Phones, and Destroy Boys.

The pink glove and metal pick were wired up to sense the positions of the player’s fingers. It didn’t matter where on the guitar you held the frets and strummed, just that you did the motions. Depending on which finger you held down, a different note would play. 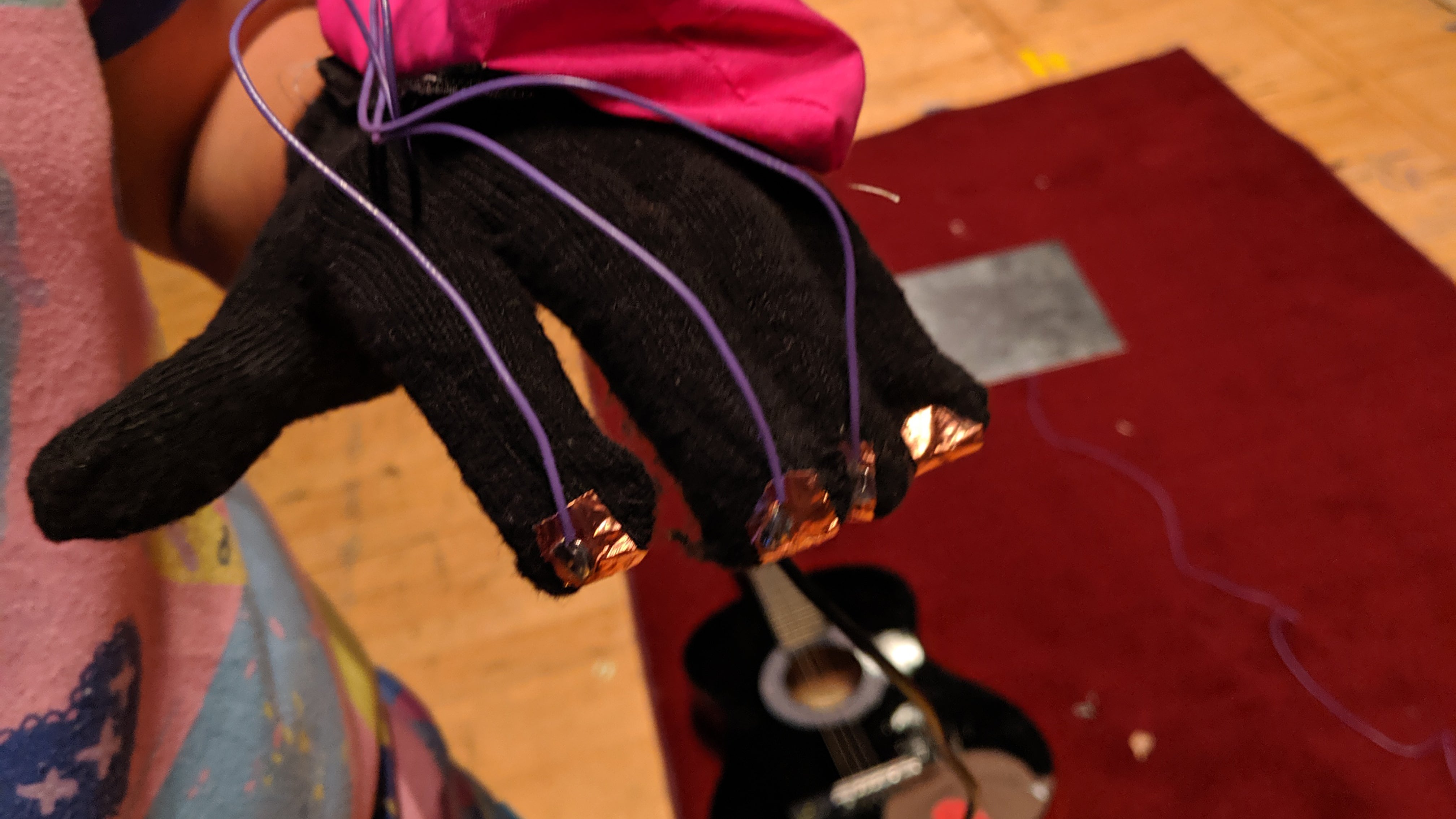 The custom glove controller that read players’ finger inputs. In the background can be seen the metal plate onto which the guitars were smashed. (Photo: David Shimomura, Kotaku)

At the end of the song, the player destroyed the guitar. This, too, was registered by the game program. Capacitive copper tape ran along the bottom edge of the guitar up to where the player’s hand held the neck of the guitar.

Players were instructed to slam the guitar down on a metal plate on the stage floor, which was wired to the laptop running the game. This would complete a circuit that would cause a monster on the game screen to burst into flame. I didn’t expect the sound to be as loud as it was. Nor did I expect it to ring in my ear at such a high frequency.

As each guitar was smashed on stage, a fine powder began to float into the air. I could smell it three rows back, an aroma not unlike the lumber section of a hardware store. When I moved into the front row, to get the best possible photos I could, I could see the beautiful splintering of each. 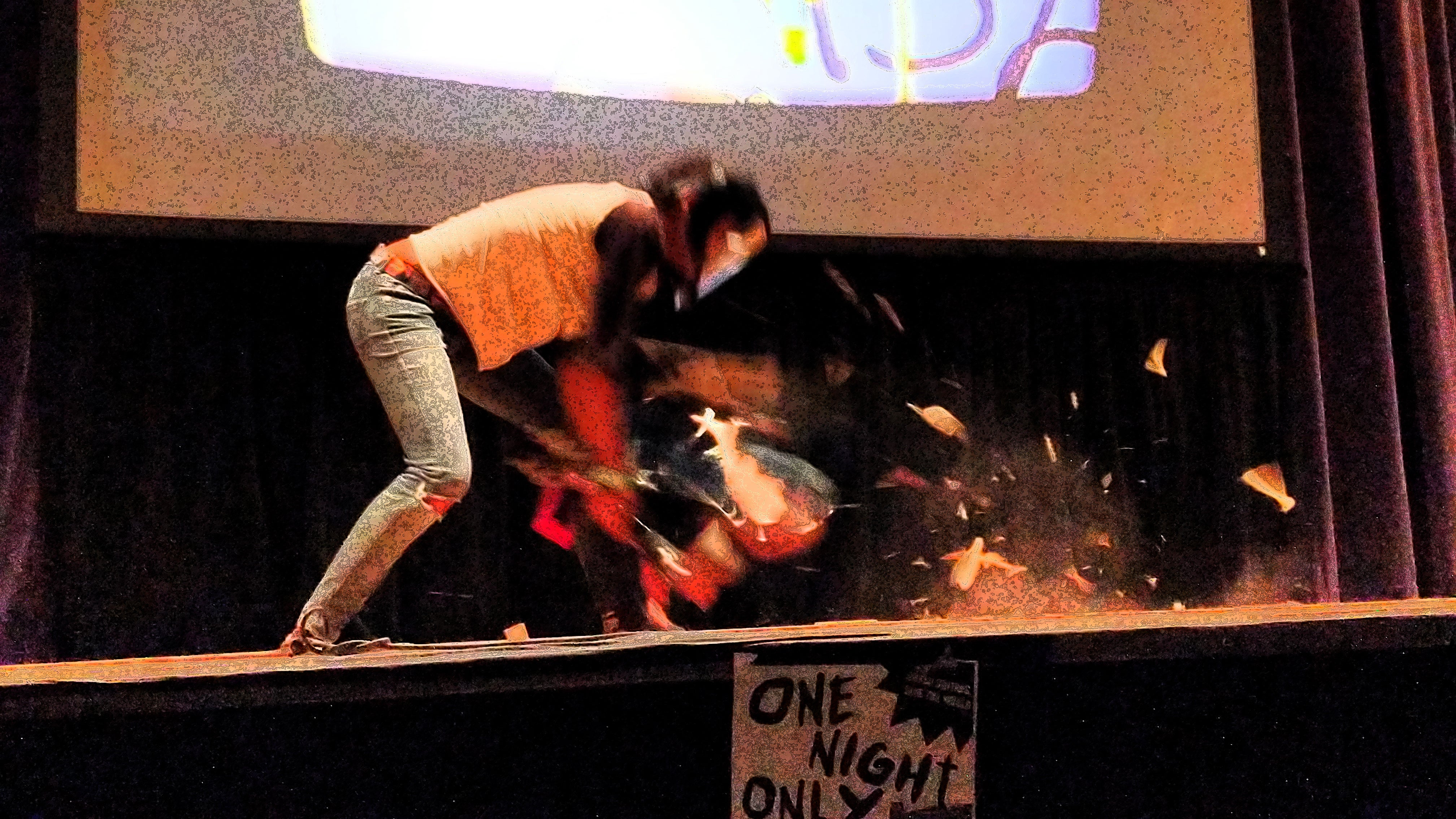 Each guitar ended its life with the same high, solid thwap.The guitar-smashing was the perfect exclamation point at the end of the punk songs. Each one punctuated something primal. You could see that the players felt it, and the cheering crowd as well.

By the end of the night, there were still guitars left, and anyone who’d stuck around through all the performances and still wanted to smash their own guitar got the chance to do so, to the tune of GRLWood’s “I’m Your Dad.” 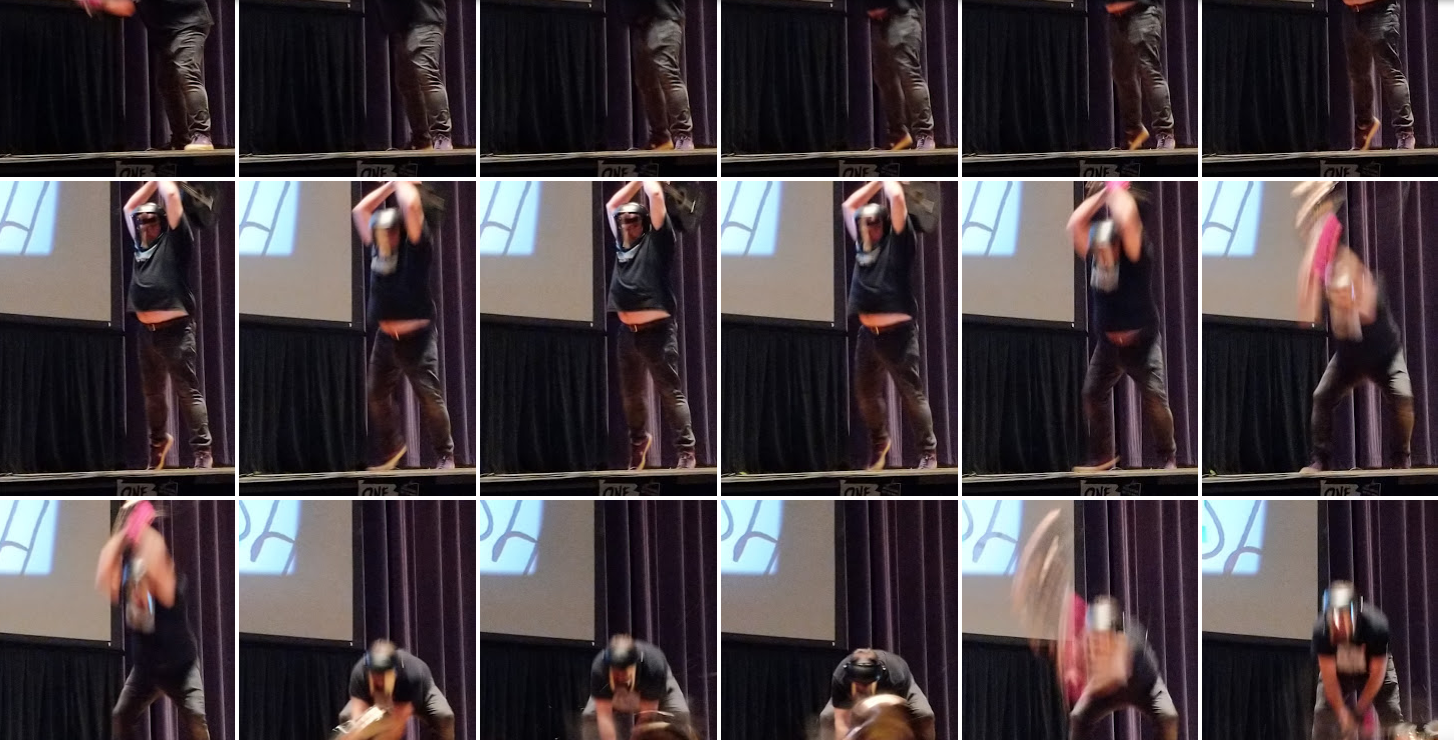 Almost all of Amanda Hudgins’ work centres around non-destructible pieces, things that are meant to be enjoyed beyond one night. They make installations for children’s museums, for example, which have to survive the onslaught of children. Making One Night Only, Hudgins said, was “freeing.”

“It doesn’t matter because it’s going to get broken over and over again throughout the night and that’s OK,” Amanda said. That sense of freedom, the lack of a tether, was on full display on stage. Everyone who smashed a guitar transformed as soon as the final beat hit. Some took the guitars to the air before windmilling them down. Some took a running start at the metal contact plate. One spiked the guitar directly downwards. They were liberated. For their joy to live, a guitar had to explode. For the audience to cheer, a guitar must cease to be.

Each high-pitched thwap brought a new roar from the crowd. Each player found new and exciting ways to smash the guitar. As guitars pancaked, splintered, and ripped apart, the crowd took on the feel of a bloodthirsty audience in a Roman coliseum. The feedback loop was complete. 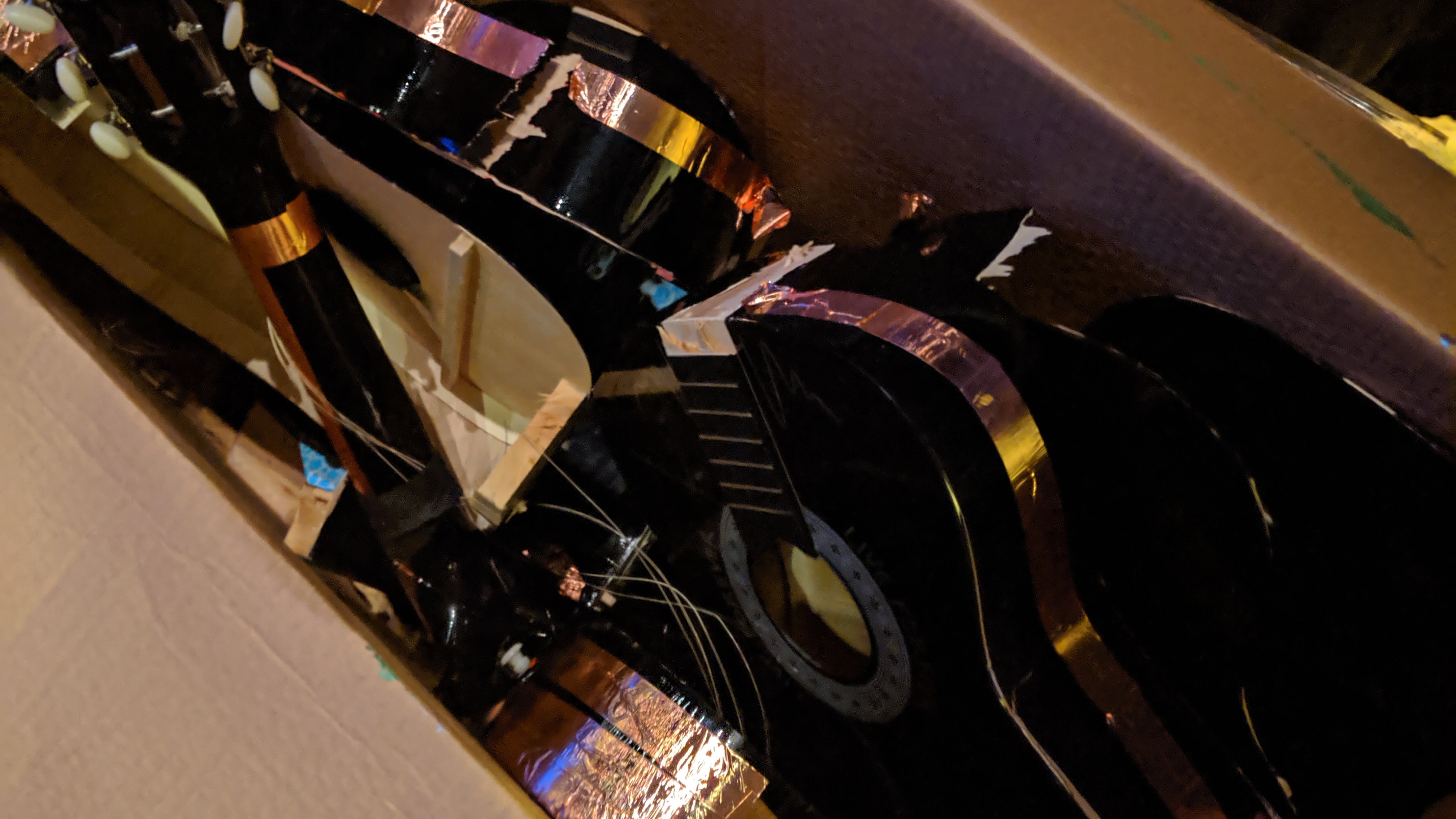 After all the guitars were reduced to kindling, more destruction remained. First, Amanda and her colleague Gingy Gibson destroyed the pink controller-glove. The crowd then roared for Hudgins to destroy the laptop that held the game’s code. They did not do this, but they did delete the code from the machine, simply and quietly.

A few of those who had smashed a guitar asked Amanda if they could take home some of the surviving pieces, like the cheap plastic faceplates. They did, and now they have a memento of a game and a night that are otherwise gone forever.

David Shimomura is a Chicago-based writer who loves tall ships and sea shanties. He can be found privately on Twitter @DHShimomura.