Gears Of War Isn’t As Fun Without The Chainsaw Gun 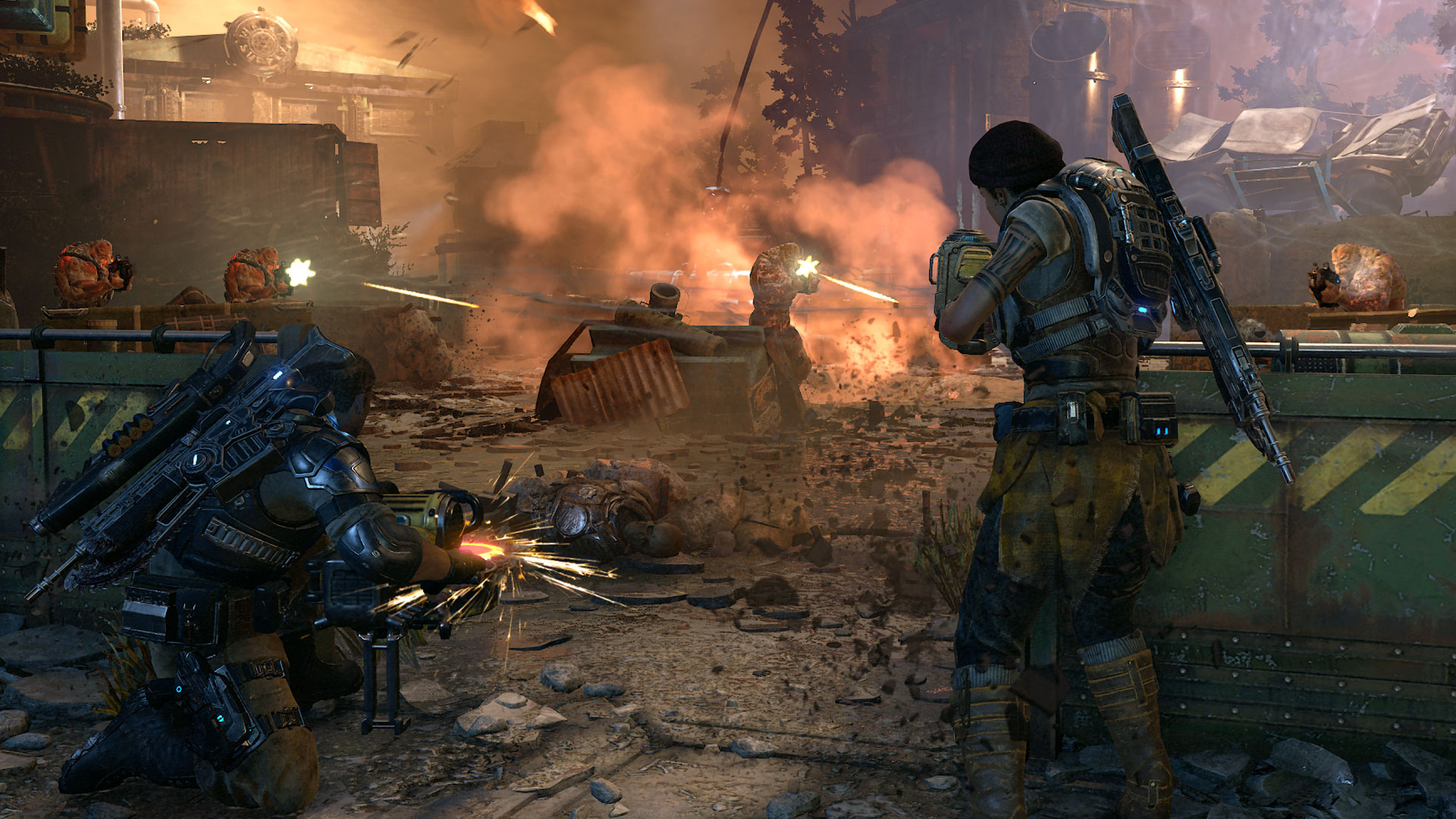 I love the Lancer from Gears of War. That’s the chainsaw gun. So I’m pretty disappointed that Gears of War 4, which I’m playing now to prep for the sequel, keeps taking my Lancer away.

I’ve loved the Lancer since the series’ original hero Marcus Fenix used it in the first Gears game. Within the lore of the game, it was designed by Marcus’ father, and it was so well-suited to fighting off the Locust horde (those are the meaty monsters that the human heroes fight in Gears) that it became standard issue for every soldier.

If any enemy manages to get past the Lancer’s submachine gun fire, its wielder can then rev up the chainsaw bayonet and slice their foe diagonally from shoulder to hip, like a peanut butter and blood sandwich.

It’s corny. It makes no sense (wouldn’t the chainsaw jam, like, constantly?). And it totally rules. I love it so much that I even have one of those massive plastic Lancer replicas sitting on my living room bookshelf. Why would I ever want to fight a battle in a Gears game without it? 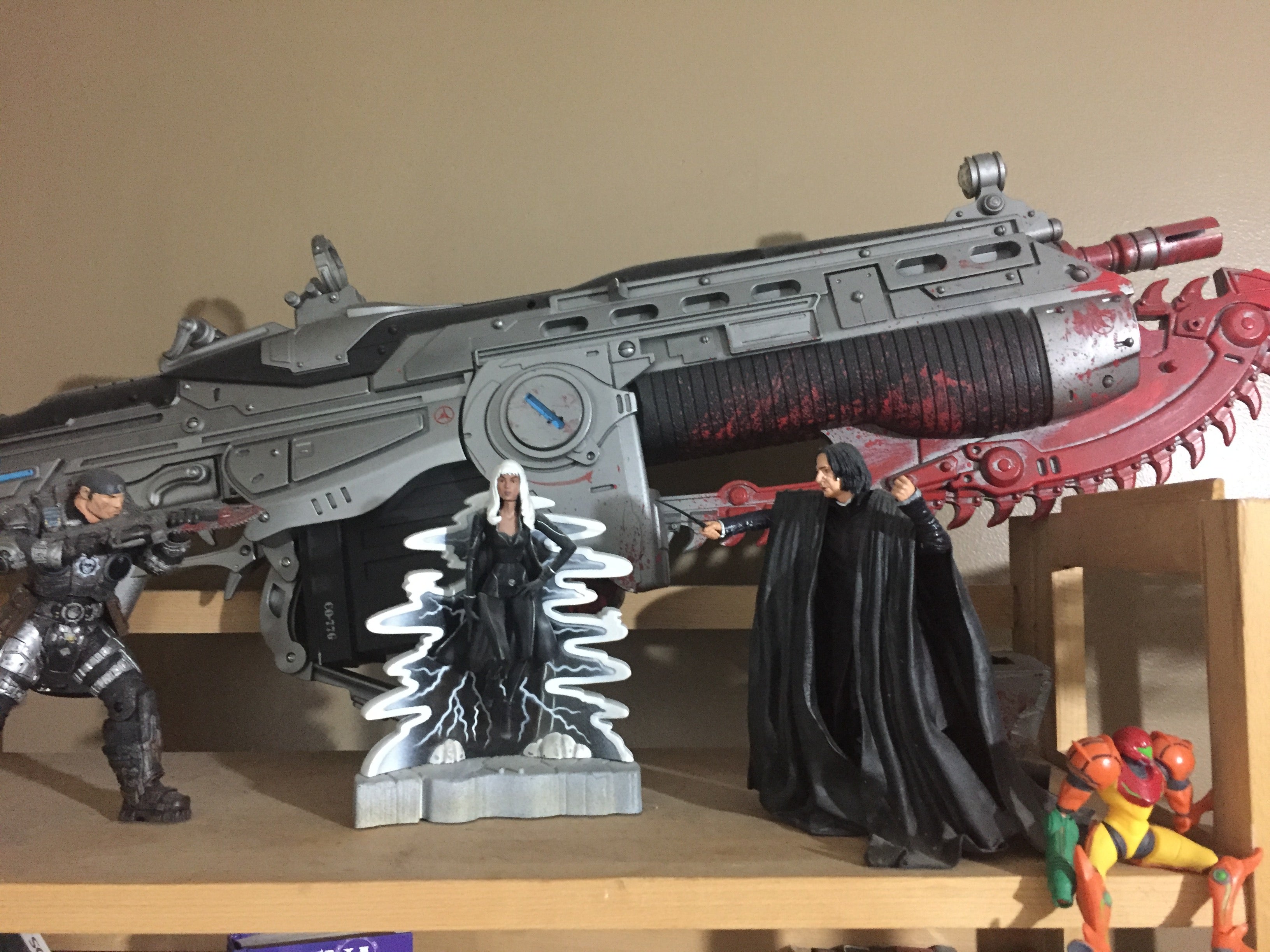 My bookshelf: Marcus Fenix, Storm, Professor Snape, Samus, and ... of course... the Lancer.

I’m finally playing Gears of War 4, which came out in 2016, so that I’m ready for Gears 5 next month. I hadn’t played a Gears game since Judgment back in 2013. Playing Gears 4 has been a delightful opportunity to revisit how satisfying the Lancer feels, both in shooting and in slicing.

For the first third of the game, though, it’s bizarrely hard to get your hands on one.

The beginning of Gears 4 has a few flashbacks to the times when the Locust horde was more of a threat. In these instances, you get a Lancer, no problem. Even if you somehow lose it, there are plenty of them lying around. These battles play out the same way the first Gears games did; you slice up Locust baddies and rev up that old saw. It’s great.

In the present day of Gears 4, though, the Locust aren’t the threat they used to be — at least, not at the beginning of the game. You’re playing as Marcus Fenix’s son, J.D. He’s a former soldier on the run from government forces, most of whom are robots. You fight against a bunch of military androids, and you don’t get to use a Lancer to do it.

It sucks to kill these robots. It’s bloodless, of course, but also the guns you use don’t pack the same punch. The robots drop a variety of other weapons; the Enforcer that most of the units carry is a submachine gun. It’s no Lancer. It feels slower and less powerful, somehow — maybe just because there’s no chainsaw attached.

Every now and then, in these early robot battles, J.D. will find a Lancer hidden in a corner. I treasured these moments, even though slicing a robot in half with the chainsaw is not as disgustingly satisfying as the bloody spray of Lancer-on-Locust.

Every time I got a Lancer, I’d hold onto it for dear life, using it in every possible situation. I used it to shoot at incoming helicopters. I aimed it at incoming sphere-shaped trackers. A shotgun is way better for those trackers, by the way, and a helicopter would probably go down easier with a rocket launcher. But whenever I managed to get the Lancer, I never wanted to switch away from it.

(Editor’s note: Dear Gears 5 designers, I hope you’re going to have a moment where Maddy can chainsaw a helicopter in half. She needs that.)

In addition to making the Lancer hard to find, Gears 4 also kept taking my Lancer away. Whenever J.D. would reset in a new area, he’d go back to having a boring-arse, Lancer-free loadout. And that was after I could barely even find a Lancer in any area in the first place.

At one point, J.D. and his rebellious friends managed to steal a special gun-building box from the government. You can walk up to this metal box and press X and then a menu appears with a list of guns you can make. I was so excited to steal this box. Guess which gun it can’t make? The Lancer. For heck’s sake!

Gears of War 4 definitely did this on purpose. The designers were just trying to delay my gratification. I know because, by now, I’ve gotten far enough in the game that J.D. has finally reunited with his very cranky father. And, of course, his father gave him a Lancer. That’s the Lancer that I intend to use for the entire rest of the game. They’d better not take it away.