House and Powers of X have spent the past few weeks changing everything we knew about the X-Men on a bold scale. Now, as the dust settles from those revelations, its latest chapter finds itself concerned with parallels and cycles of a different kind ” ones that ask some very interesting questions about what could become of mutantkind going forward.

Unlike its predecessors in either House or Powers so far,Â Powers of X #2 ” by Jonathan Hickman, R.B. Silva, Adriano Di Benedetto, Marte Gracia, Clayton Cowles, and Tom Muller ” is not really an issue of shocking reveals or bold declarations for this potential-laden new era for mutantkind.

Really, it’s the first time this saga can breathe, to merely set the playing field of the actual story of this event series instead of simply (if you can call what Hickman and his creative teams are doing in this duology simple, that is) making its grander thesis of breaking the mutant cycle.

That story is a not an unsurprising one in the slightest, given everything else these two books have had to say about the cyclical nature of mutant storytelling already. In the present day timeline”XÂ¹ for those playing along with the Time/Space/Moira MacTaggert-based algebraic demarcations ” Xavier, Magneto, and Cyclops have become aware of humanity’s plans to utilise the Mother Mould seen being built in House of X #1 to create an army of master Sentinel Moulds, a blueprint that could see the newly ascendant Mutant state cut down like so many havens before it. 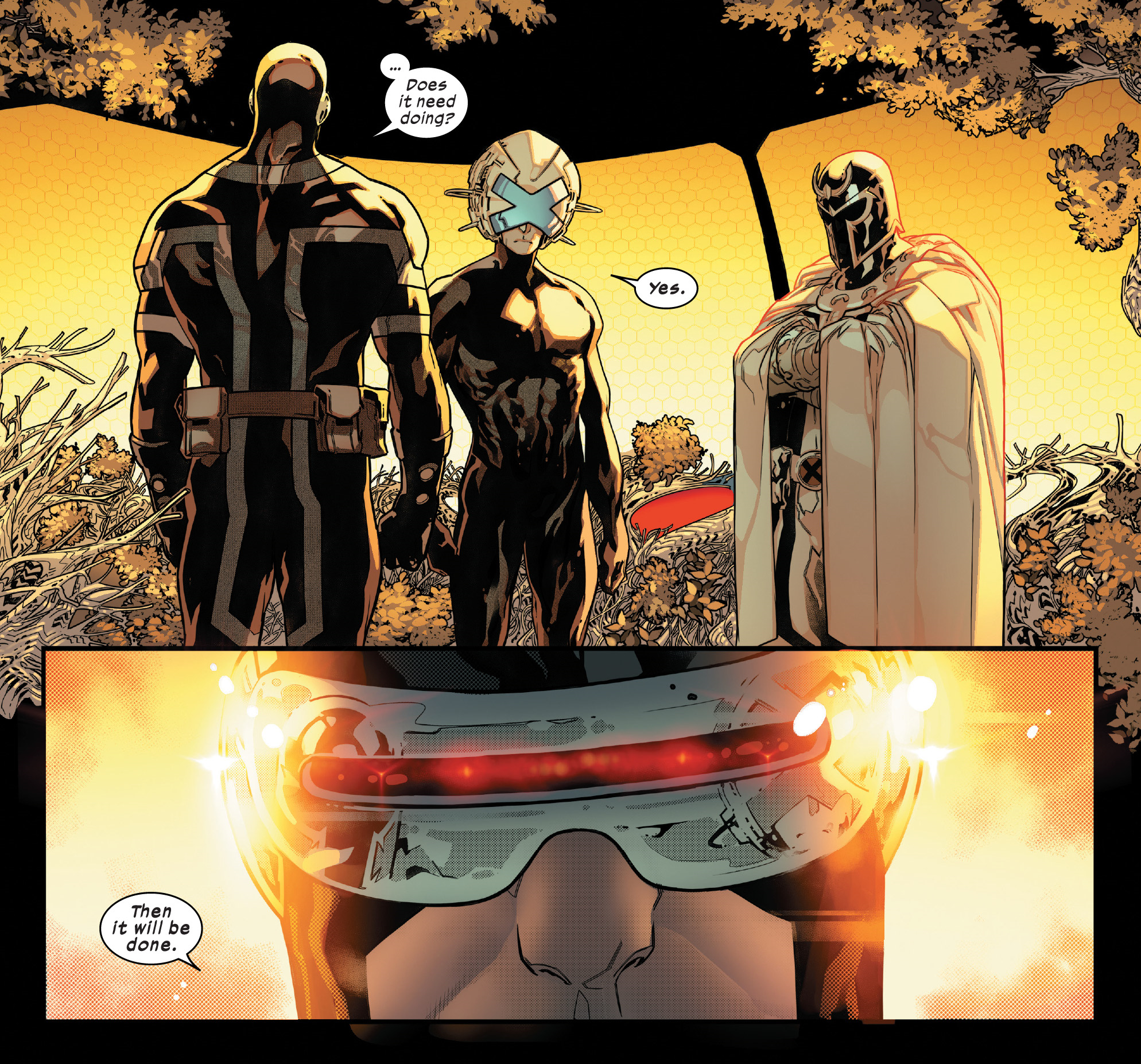 While they make plans to form an assault before it can come online, over in the far-future of XÂ², Rasputin and Cardinal’s mission from Powers of X #1 reveals itself as one of data retrieval ” and that this ragtag band of cloned and hybrid-cloned mutant resistance fighters in the battle against humanity are working with none other than Apocalypse himself in their bid to survive. 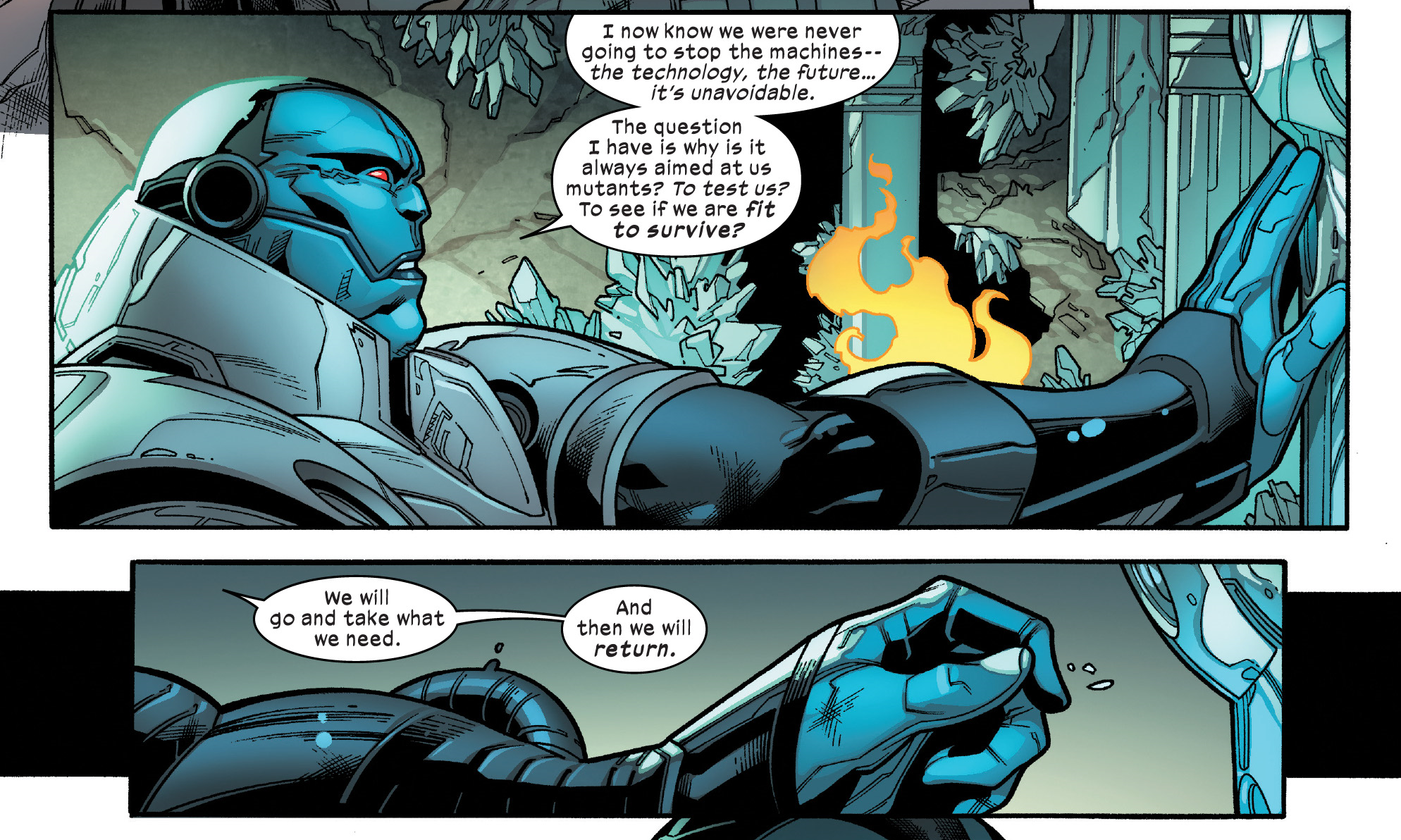 …and in the future, so does Apocalypse. (Image: R.B. Silva, Adriano Di Benedetto, Marte Gracia, and Clayton Cowles, Marvel Comics)

That particular bit of thematic rhyme is interesting, however. It’s in the two other timelines that bookend Powers of X #2 that some potentially meatier ideas are laid out. Powers of X #2 opens and closes with scenes set in the Xâ° and XÂ³ times. The first sees Moira ” or as we now know her, Moira X, the 10th incarnation of a cyclical mutation that has spent the entirety of multiple lives quietly shaping the course of mutant history as we’ve known it ” and the young Charles Xavier paying a visit to Magneto’s Island M to propose joining together as part of Moira’s bold new truth.

Magneto is rightfully sceptical, as the fraught history between the ultimate frenemy relationship that is Charles Xavier and Erik Lehnsherr is well known to us all at this point. Since he doesn’t know who Moira really is, Magneto thinks this is just another one of Charles’ futile gestures of peace, when what mutantkind needs is a leader who will get the job done, no matter the cost.

But when Moira shares her past lives with him as she did Charles, Magneto is both momentarily traumatised and opened to the idea of what they’re both trying to do, leading to the start of a new alliance. There’s a hope to it, one born out of that sudden sadness of Magneto experiencing the failures of past cycles so keenly ” his own failures, where his desire to stand alone and away from Xavier’s ideals have cost him so much ” that he opens his heart to try to work with his distant rival once more. A longtime X-Foe becomes an ally. But when you begin to contrast it to the scene we’re given in the XÂ³ timeline, that hope suddenly becomes laced with a tangible level of disconcert. In that distant future, Nimrod and the Librarian ” and their gathered living library of mutant consciousnesses ” are revealed to have been working on merging an intellect of vast computational power: a worldmind. As we’ve come to expect from this story so far, it’s here we get another fascinating set of Tom Muller-designed, coldly clinical slices of info-dumpery to add at least a little context to the mystery presented to us. 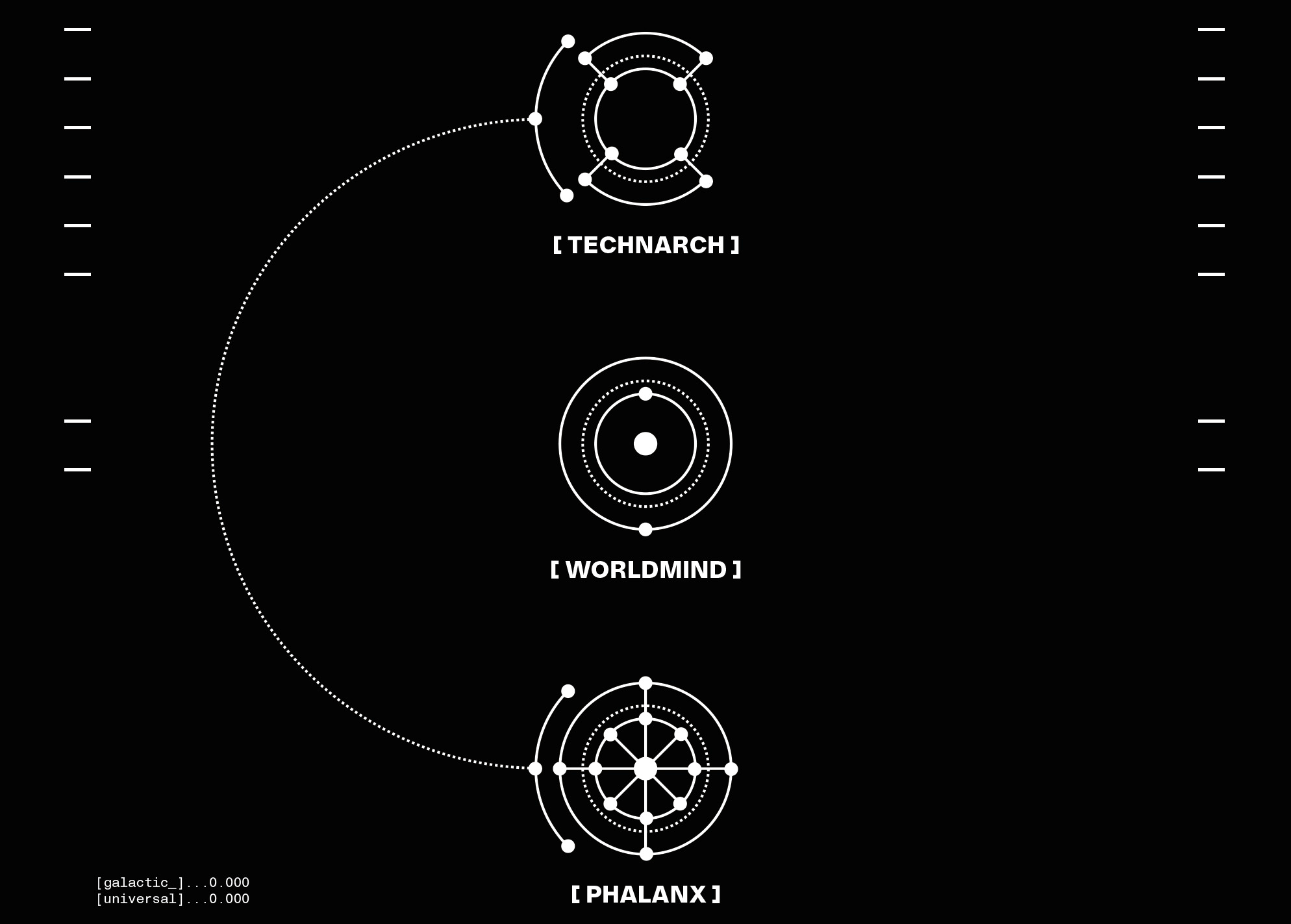 Turns out in the far future of XÂ³, the idea of powers of 10 has also been applied to galactic civilisation’s measure of sentient intellect, artificial or otherwise. A single machine intellect becomes a Hive when put to the power of 10, which becomes an Intelligence when that is put to the power of 10, and so on as we grow to Technarchs, which become Worldminds ” what the Librarian and Nimrod have fashioned their world and its repository of mutant sentience into ” which become… well, a name very familiar to X-fans: a Phalanx.

Famously introduced in the mid-“˜90s Uncanny X-Men run, the Phalanx were a race of sentient machines that infected and assimilated other beings into their collective consciousness through the techno-organic transmode virus, itself originally created as an attempt to merge humanity with the technology of sentinels in the ongoing cycle of conflict between humans and mutants. But in XÂ³’s future, they’re not mutantkind’s enemy, at least as far as Nimrod and the Librarian are hoping: 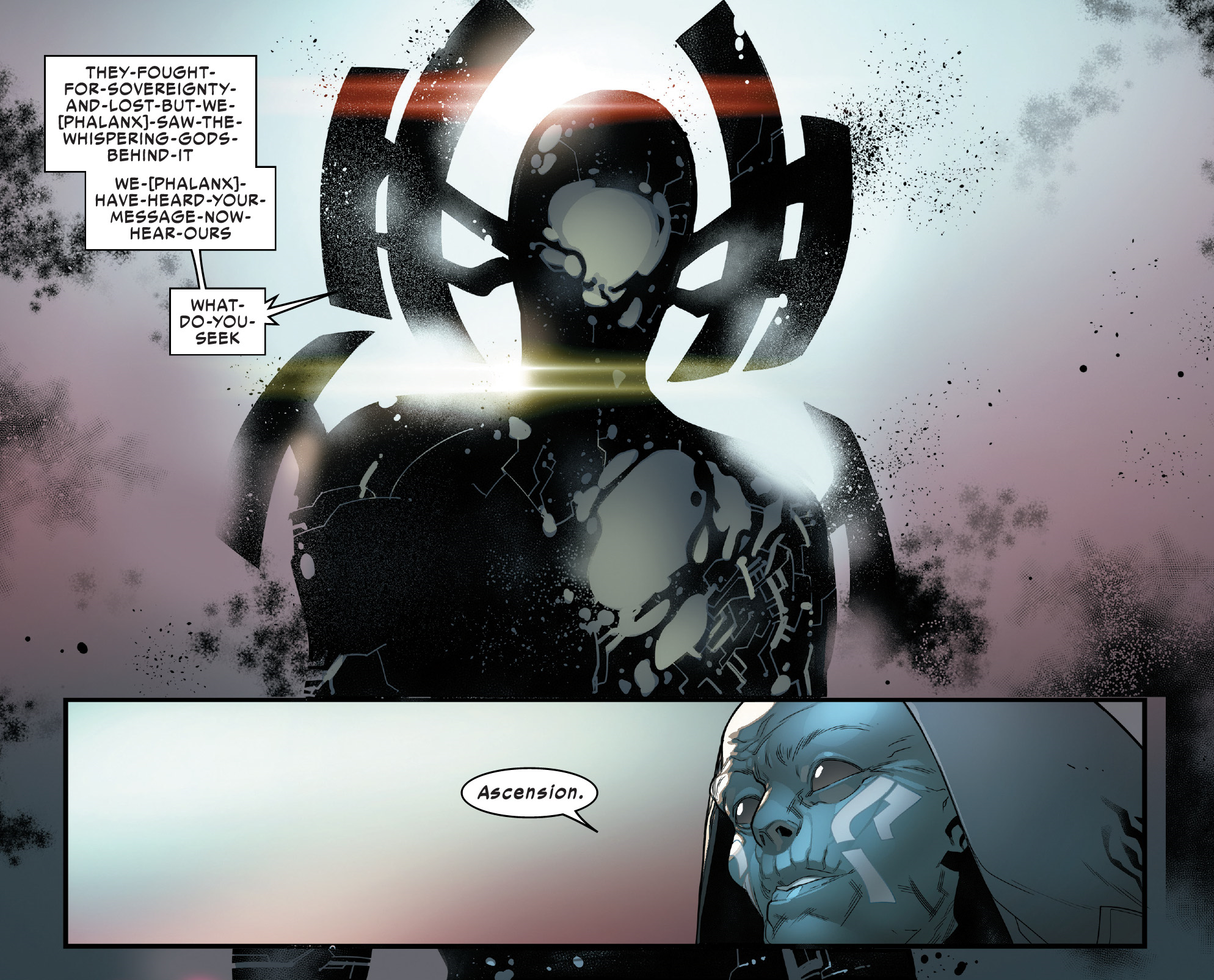 They’re its salvation. A chance for their library of mutant consciousness to ascend into the Phalanx’s intelligence to create something more. Machine and mutant sentience could come together instead of the endless cycle of war that has come to define tale after tale of mutants and sentinels, of X-Man vs. Machine. Something not unlike the parallel between the XÂ¹ and XÂ² scenes now becomes clear in the structural decision to pair off the Xâ° and XÂ³ scenes of this issue: another longtime X-Foe becoming an ally.

Given the mirrors and cycles elsewhere in Hickman’s story so far, the decision to put these two moments in parallel might paint a far more sinister angle to the ramification of Moira X’s plan ” or is it really perhaps Destiny’s, considering their strained encounter in House of X #2 last week? ” this time around than it initially seems.

But if we’re being presented with Magento and Xavier’sÂ coming together as foe becoming friend, maybe the ultimate endgame for mutantkind and the Phalanx is going to become much more complicated than even that.