Look at this piece of gaming hardware, all panels and buttons and weird pokey bits. This is the Mad Catz R.A.T. 8+ 1,000, a limited edition mouse celebrating the company’s 30 year anniversary. It’s emblematic of the odd but oddly-satisfying design choices made by one of the biggest names in computer peripherals. I love it as if it were my own cyborg son.

To think we nearly lost Mad Catz. Back in 2017, the company closed its doors following a lengthy struggle with not making enough money to exist. Gamers everywhere mourned the loss. Would there ever be a company brave enough to release really weird shit, like the S.T.R.I.K.E. gaming keyboard, or whatever the hell this thing was again? Of course there would! Mad Catz was apparently too big of a name not to be eventually swallowed up by a Chinese holding company and put back into operation.

Less than a year after closing, Mad Catz was back in business as Mad Catz Global Limited, with a whole website filled with characteristically strange products like the revitalized R.A.T. line of kooky gaming mice.

The R.A.T. 8+ has got a Pixart PMW 3389 optical sensor, which features the fastest tracking speed (1,016cm per second) and highest resolution (16,000 counts per inch) of Pixart’s current gaming mouse sensor lineup. It uses Omron switches for its buttons, rated to 50 million clicks during their lifetime.

The R.A.T. 8+ has many buttons. Left click. Right click. There’s a button beneath the scroll wheel to adjust the mouse’s CPI. On the thumb rest there are internet back and forward buttons, as well as a precision aim button that slows down the pointer for perfect shots. Along with a clickable scroll wheel, there is a thumb barrel control. Almost all of these buttons are programmable.

It mouses good, which is an important thing for a gaming mouse to do. But the real selling point of the R.A.T. 8+ is its physical versatility, AKA the reason the mouse looks like a prosthetic dog foot from the far future. 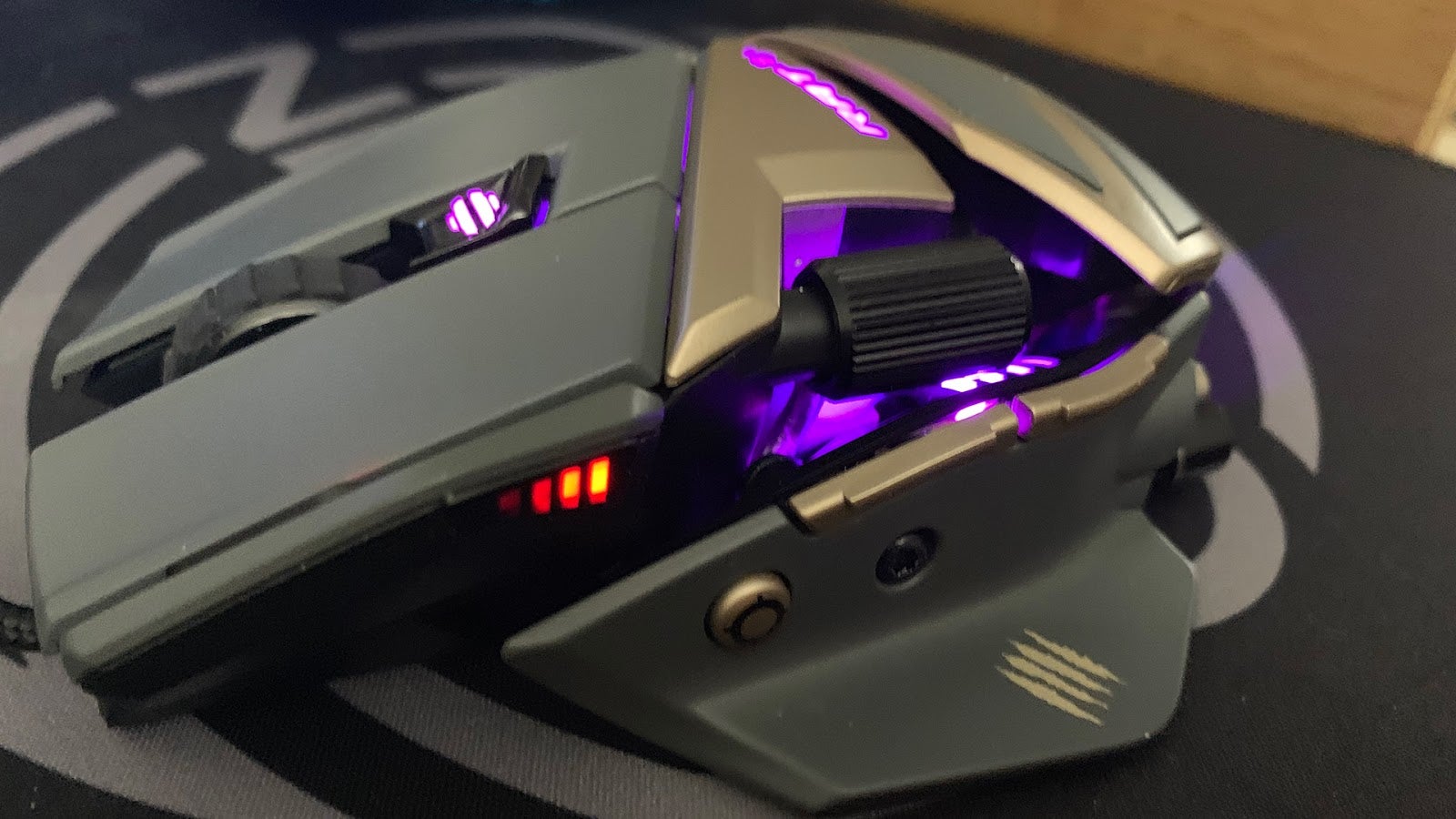 The R.A.T. 8+ is built so users can customise the mouse for comfortable and optimal hand positioning. The palm rest, for example, can be slid back with the push of a button, extending to accommodate larger hands. Pulling it out all the way allows the rest to be swapped out for one of two alternate palm rests. 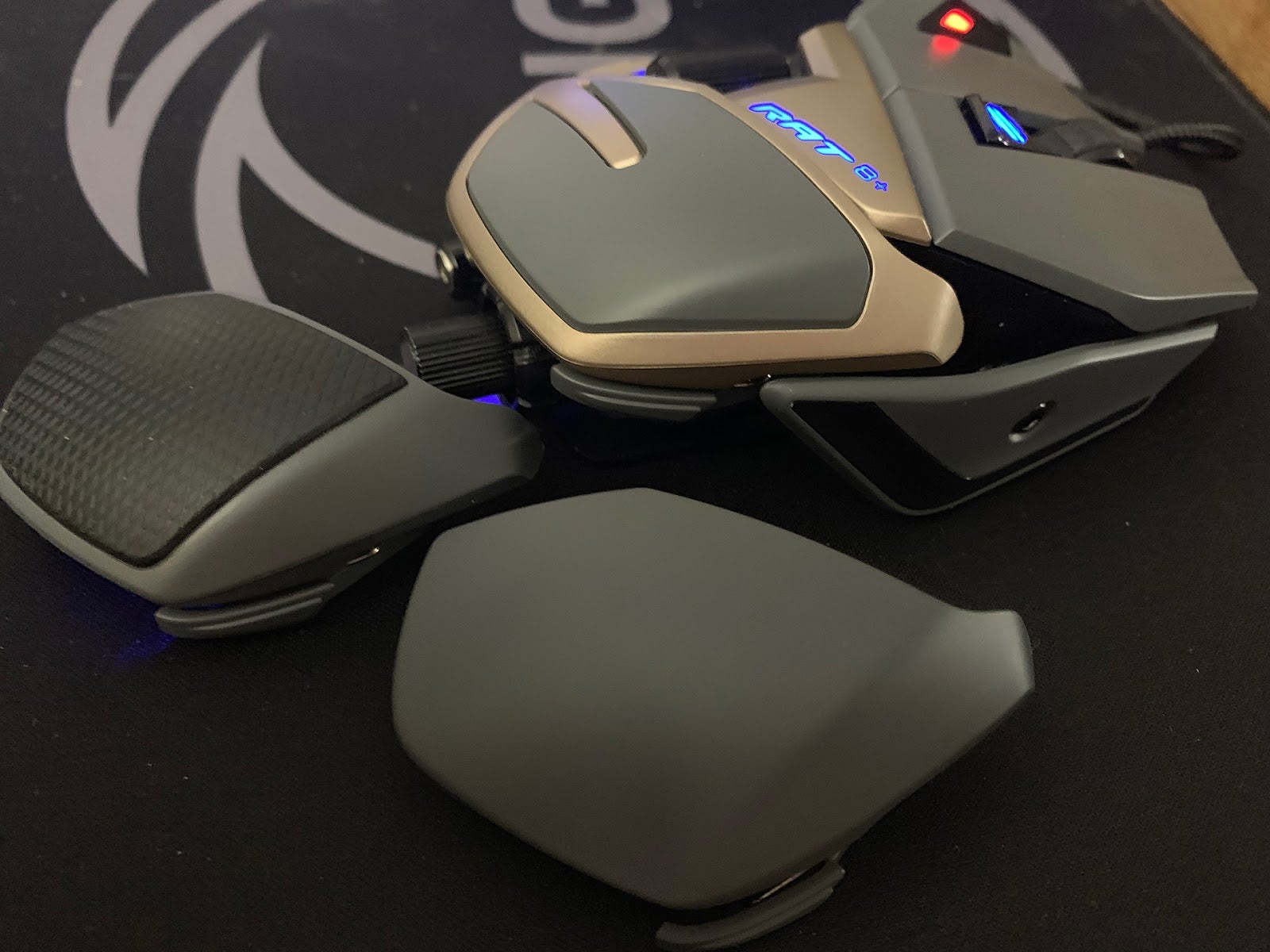 Other adjustments can be performed via a hex driver tucked into the rear of the mouse. Users can remove the pinky support and replace it with a piece more friendly to a claw-style mouse grip. 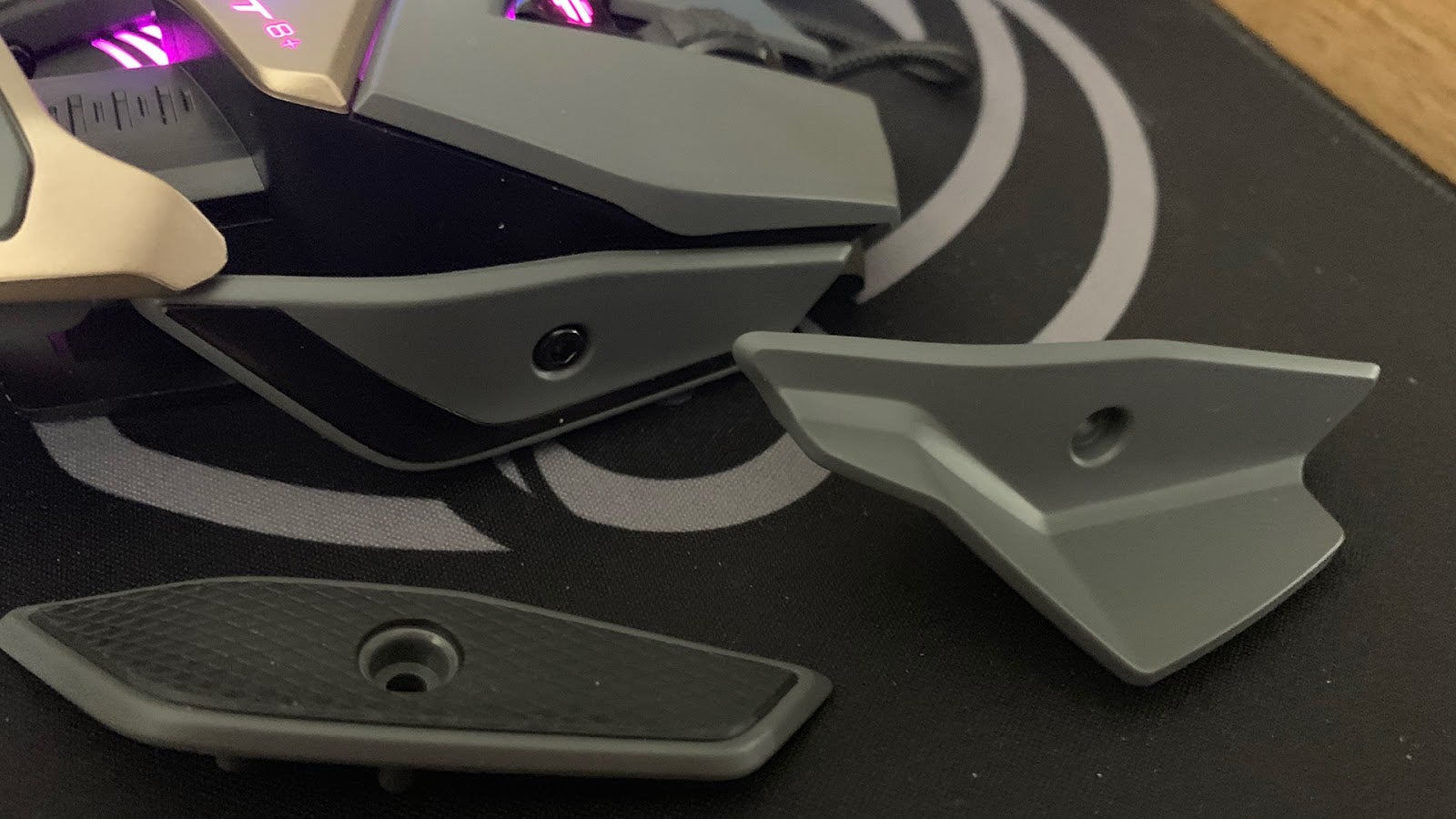 The thumb rest can also be adjusted so it’s further outward from the main mouse body, as well as higher or lower along the side of the unit. When all the adjusting is done, the hex driver slips back into the underside of the unit, doing double duty as an anchor for a trio of removable weights. 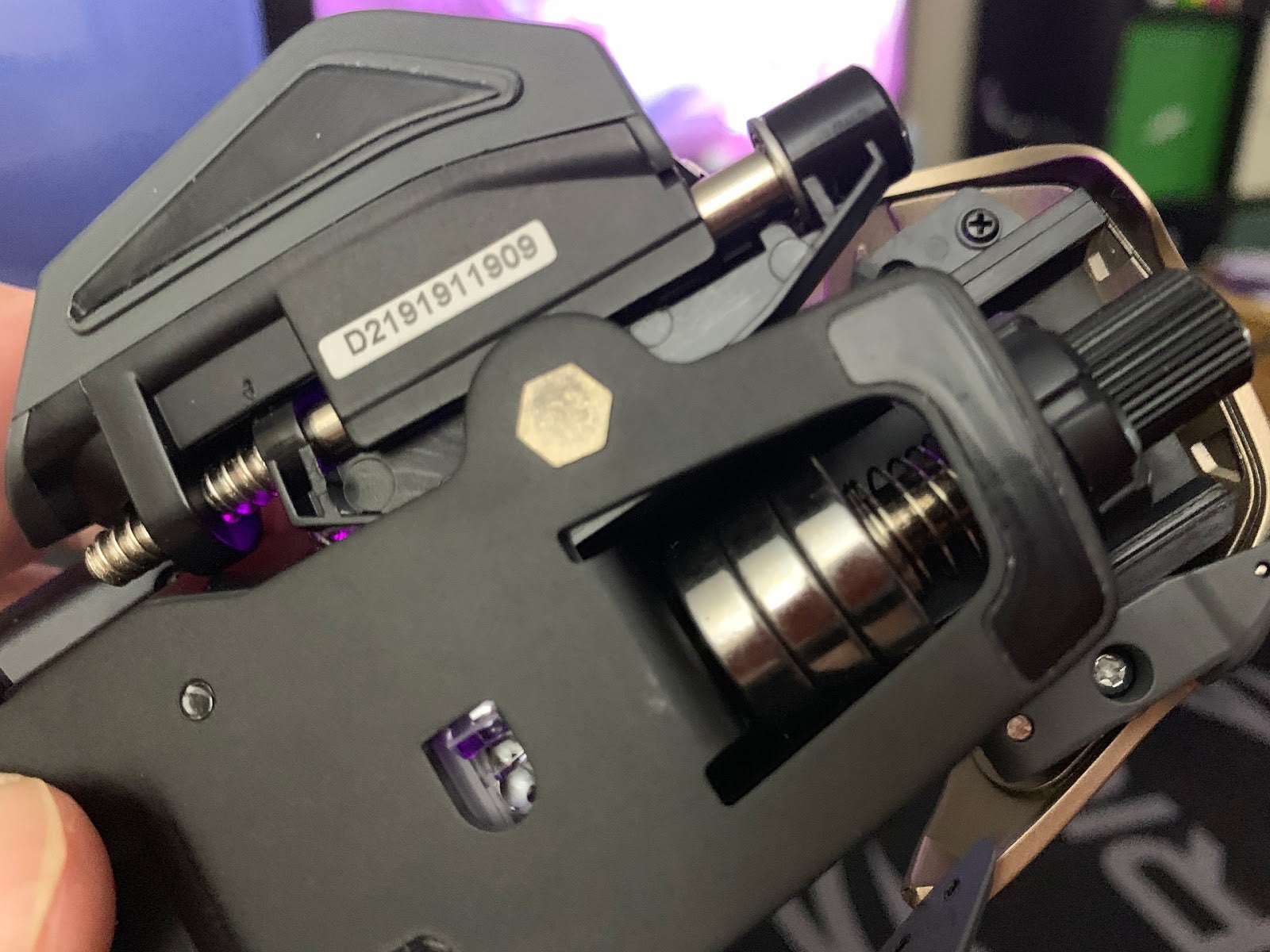 On one hand, especially if that one hand is the only one that will be touching the mouse, all of this adjustability is sort of silly. Once a person finds the optimal position for their R.A.T. 8+, it’s likely they’ll never touch any of the adjustable features again. But me, I like to play and fiddle with my hardware. I have restless hands. Large restless hands that appreciate the extra length and extended thumb room the R.A.T. 8+ provides. 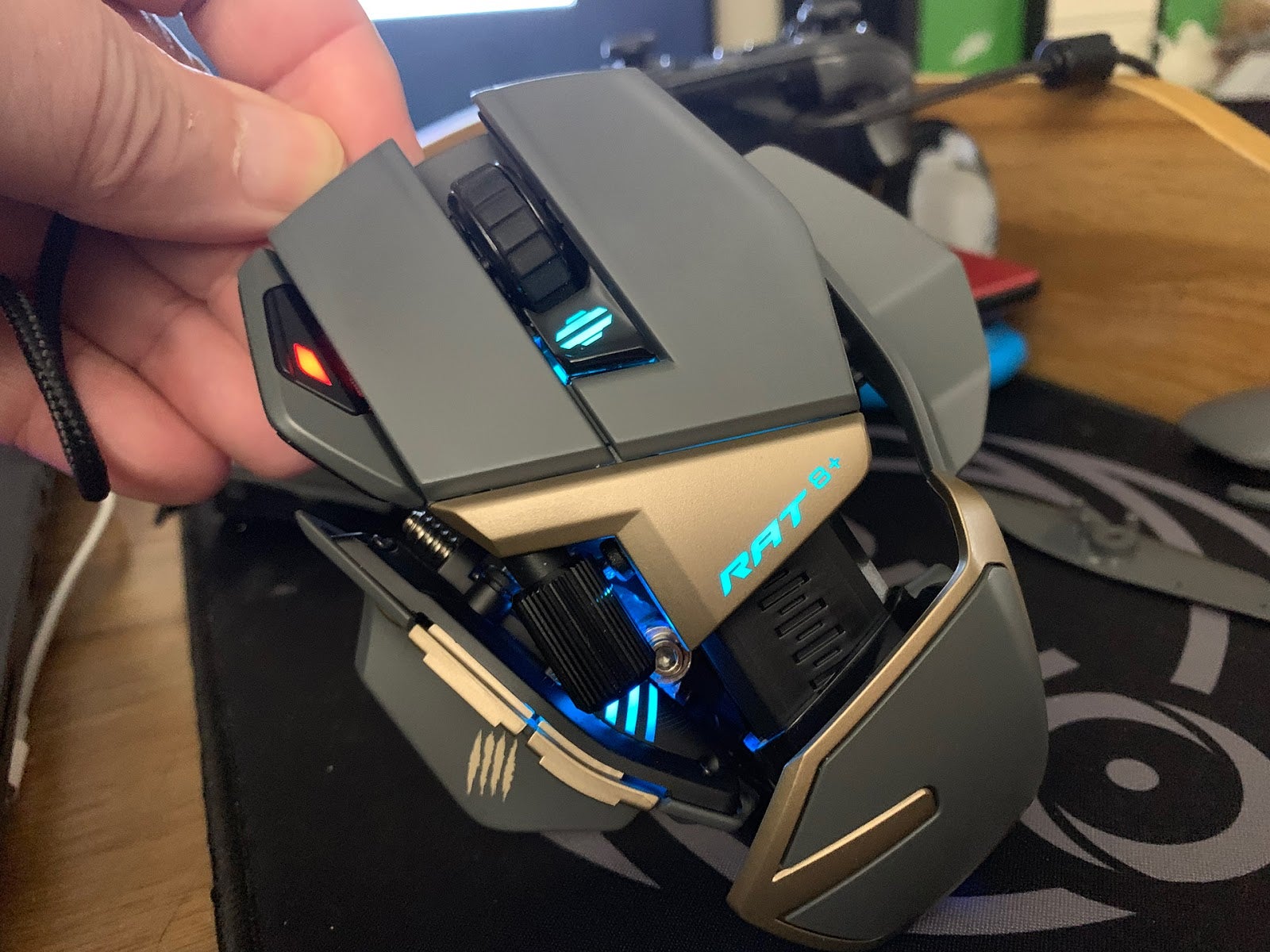 I’ve got the palm rest as far back as it will go. I swapped out the default pinkie rest for the claw-friendly platform. I’ve pulled the thumb rest away from the side of the mouse so my massive hand can sit in a more natural position. This is what works for me.

That’s what I love so much about Mad Catz’s goofy R.A.T. line of adjustable gaming mice. I could have gone through a dozen other gaming mice to find one with all the features I like. Instead, I made a few adjustments to this one and now I’m good to go. The R.A.T. 8+ looks strange, but it’s a strange thing that suits me perfectly.