If I wanted to, I could put together a gaming PC with many of the same parts as this desktop by boutique system builder CLX, but I could never make it look as good. From the striking patterned pink outer shell to the gleefully glowing innards, CLX knows how to make a gaming rig look amazing.

CLX is the gaming division of Cybertron PC, a Kansas-based company that’s been putting together PCs since 1997. I first encountered the company back in 2016, when I reviewed one of its smaller systems, the “Scarab.” Though much smaller and lighter than the full-sized “Ra” model I recently tested, the Scarab packed a whole lot of power and a great deal of Egyptian-themed pretty into a compact package.

Editor’s Note: The CLX website sells directly in Australian dollars, with shipping taking between 8 and 15 business days. Pricing depends on the customised system, but don’t expect it to be cheap. 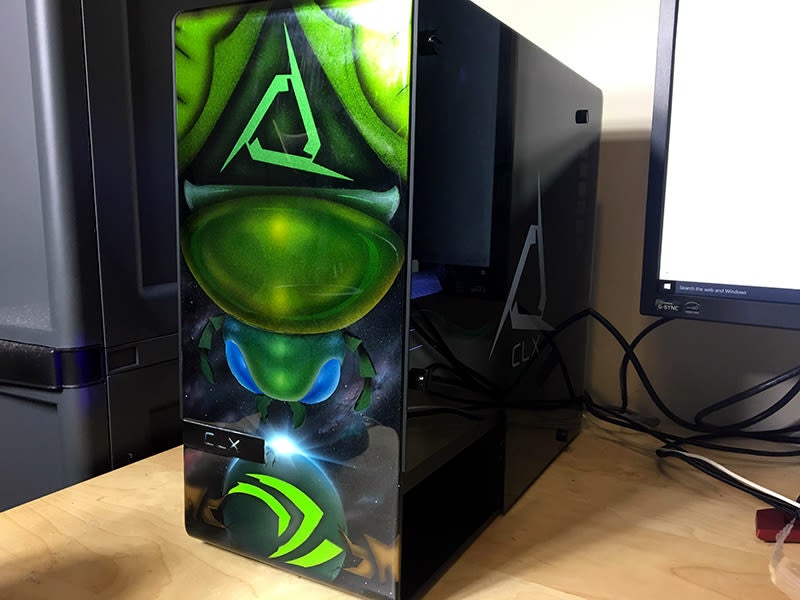 In the three years since I reviewed the Scarab, Cybertron PC has strengthened its CLX gaming brand, distancing it from the endless Transformers jokes that plagued early reviews (mine especially). When I see CLX at a trade show or gaming convention these days, I immediately know that I am going to see something gorgeous.

Case in point, the massive glass-and-metal beast that occupied my desk for several weeks. Look at that reflective metallic finish on the Phanteks Evolv X chassis. 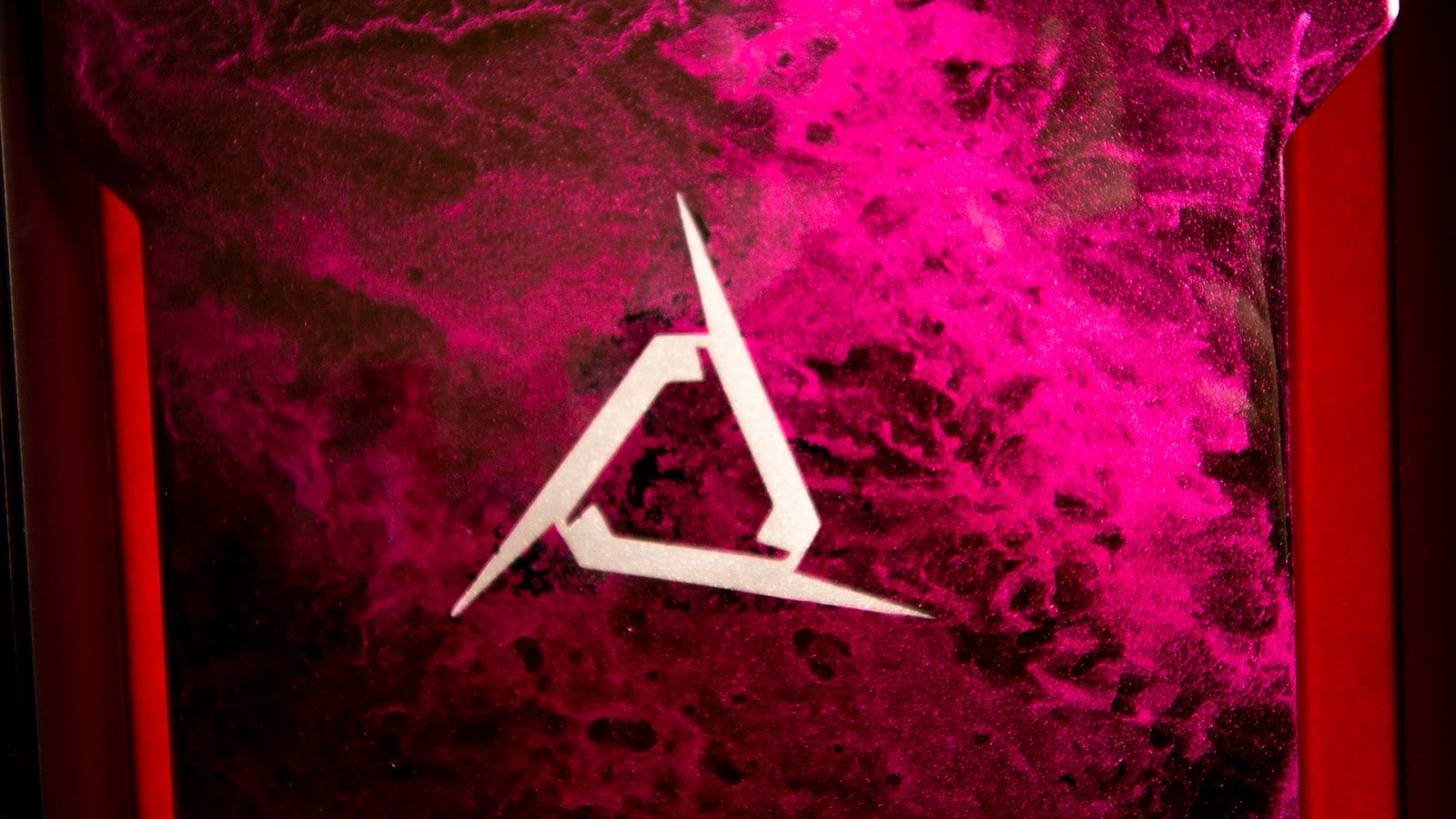 The custom paint job costs $488.37, with an additional $81.40 for the “Jasper” pattern. CLX took a $299 case with a nice tempered-glass side window and some nifty integrated RGB lighting and turned it into a (expensive) work of art. 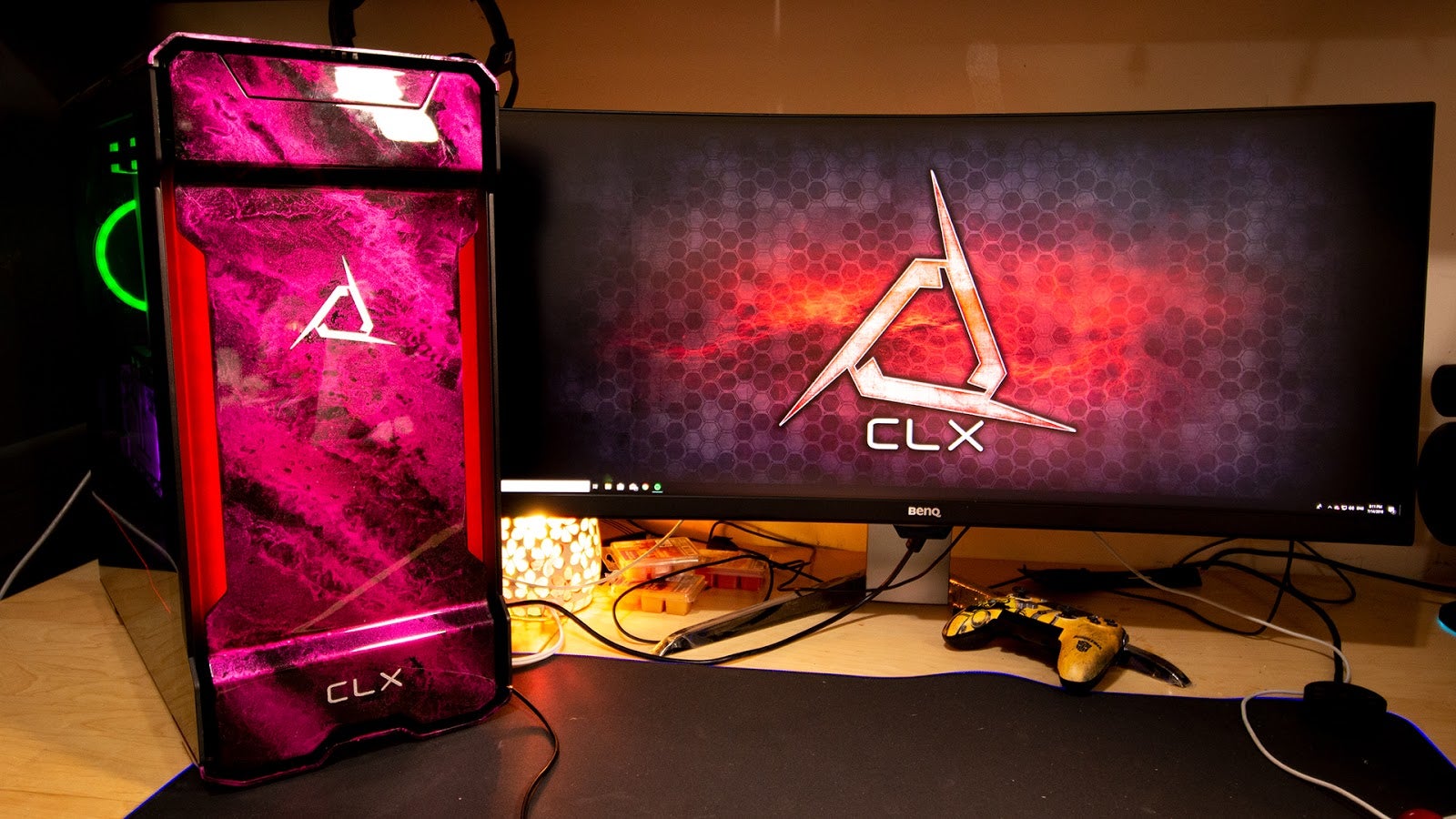 See the green light peeking out from inside the system on the left side of the photo? Let’s take a closer look. 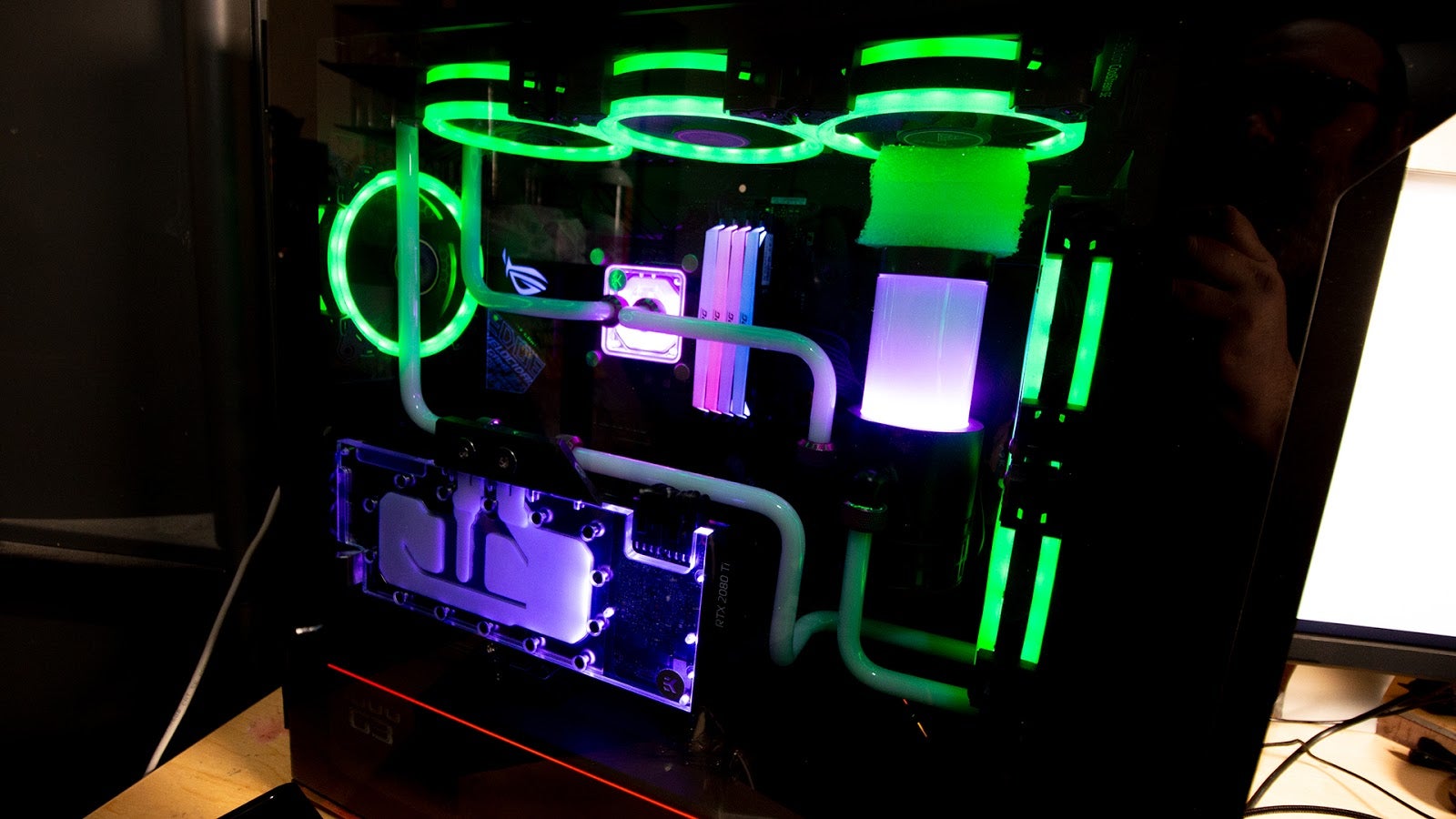 My goodness, that is pretty. Custom water cooling pipes. That gradient coolant reservoir. A total of seven internal fans. The four 8 GB DDR4 memory sticks glow. The heatsink covering the Intel Core i9-9900K CPU glows. The side-mounted Nvidia Geforce RTX 2080 Ti graphics card glows. And all of the glow is customisable, with different colours and effects adjustable via remote control. 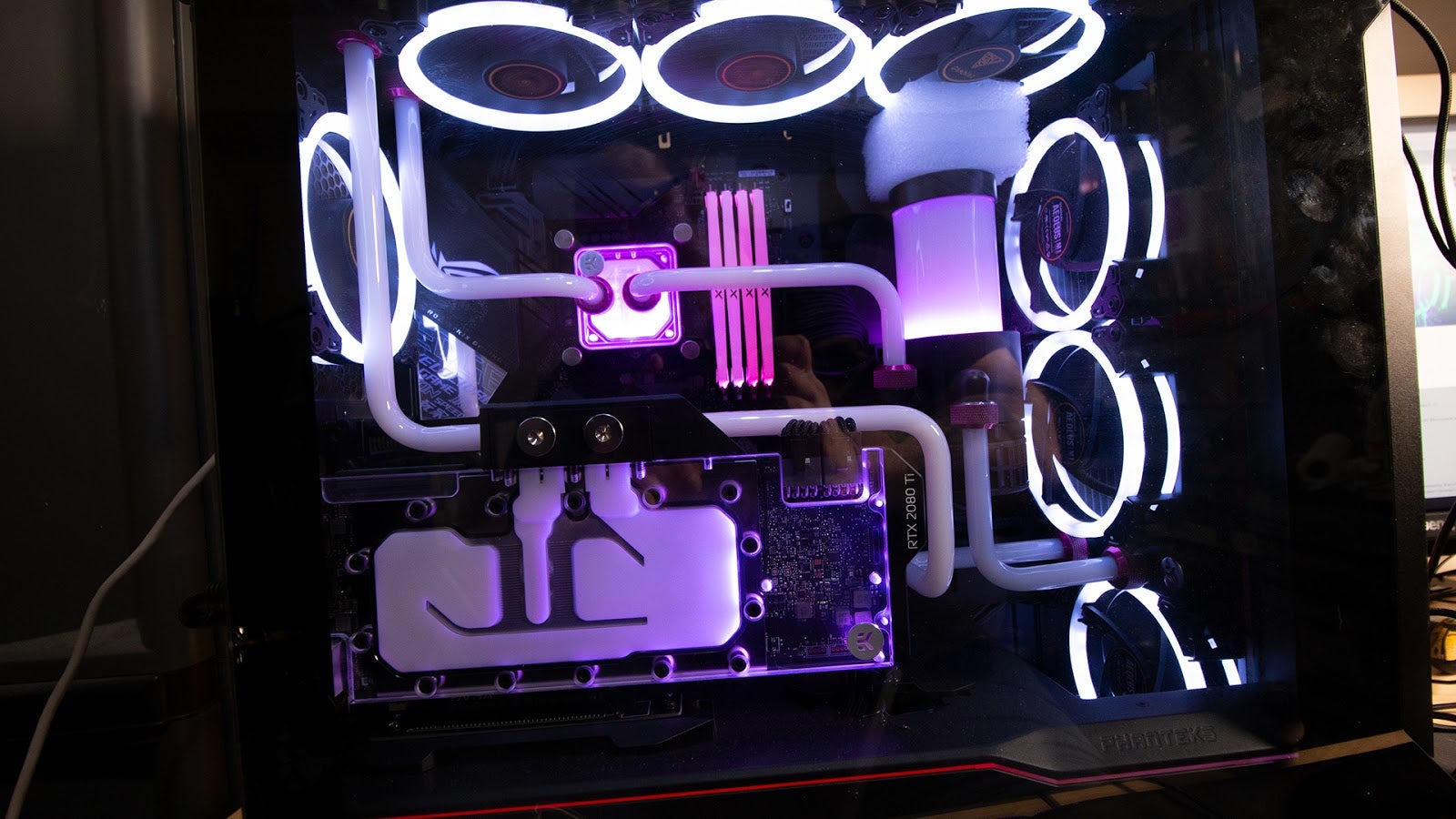 The only bad thing about the look of the CLX Ra here is that I sit with my computers to my left, so I don’t get to enjoy the light show while I am working and playing.

What I love about the CLX system, which runs around $US3,300 ($4,883) as configured and decorated, is that its internals are almost the same as the personal PC I use for work every day. Same CPU, same video card. The CLX system has 32 GB of RAM to my 16 GB, but otherwise, it’s not far off. It’s a powerful computer capable of running all the games at 4K with all of the ray-tracing everybody keeps going on about. 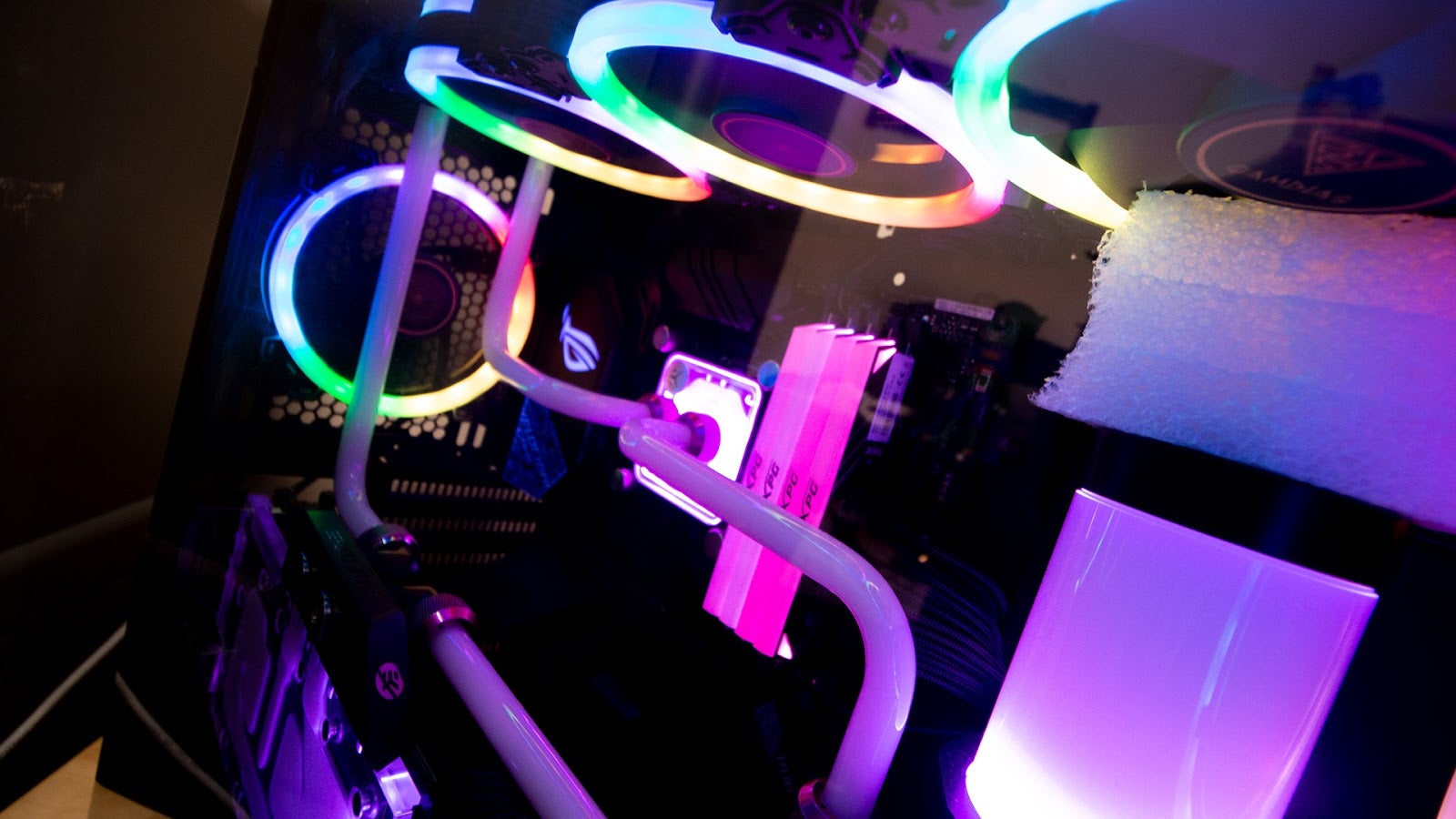 It performs nearly identically to my personal system, but it does so with grace and style far beyond that of my home-built PC with its relatively utilitarian NZXT H510 case. Where my system is a mess of wires, the CLX system is a series of internet-like tubes.

While I haven’t figured out how to hook up all the RGB-lighted things I gathered for my personal system, CLX’s Ra is completely tricked out. My fans rattle slightly. The Ra has seven fans and is whisper quiet, aside from the occasional pleasant trickling sound of its coolant circulating.

The CLX system is so gorgeous that I didn’t even notice I forgot to take out a bit of the foam the company packed inside the system for shipping. Did you notice? 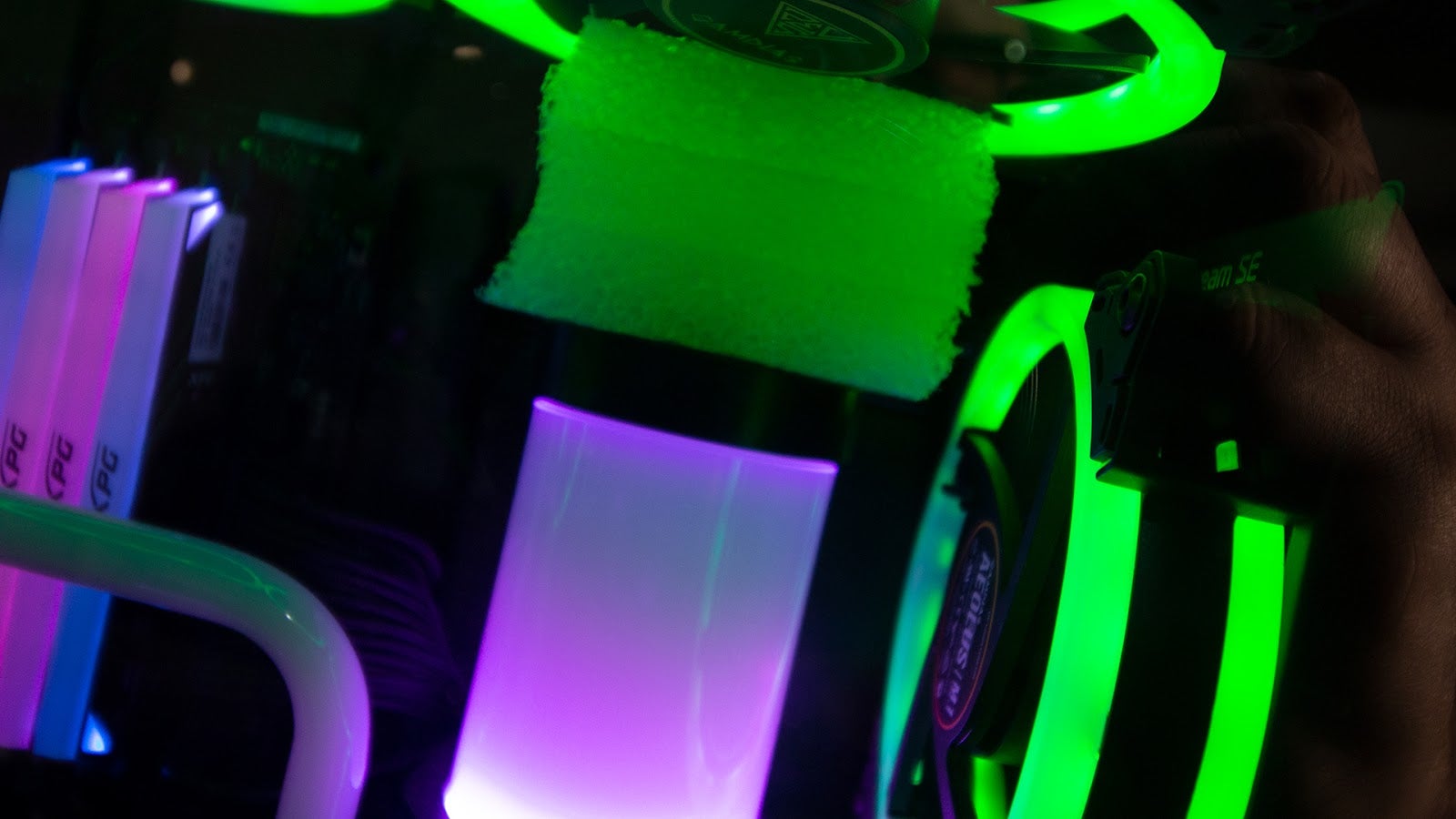 Yes, even with one of its case fans not spinning at all because some dork didn’t remove a bit of packing foam, the CLX Ra performed like a champ the entire time I had it, and looked gorgeous while doing so.