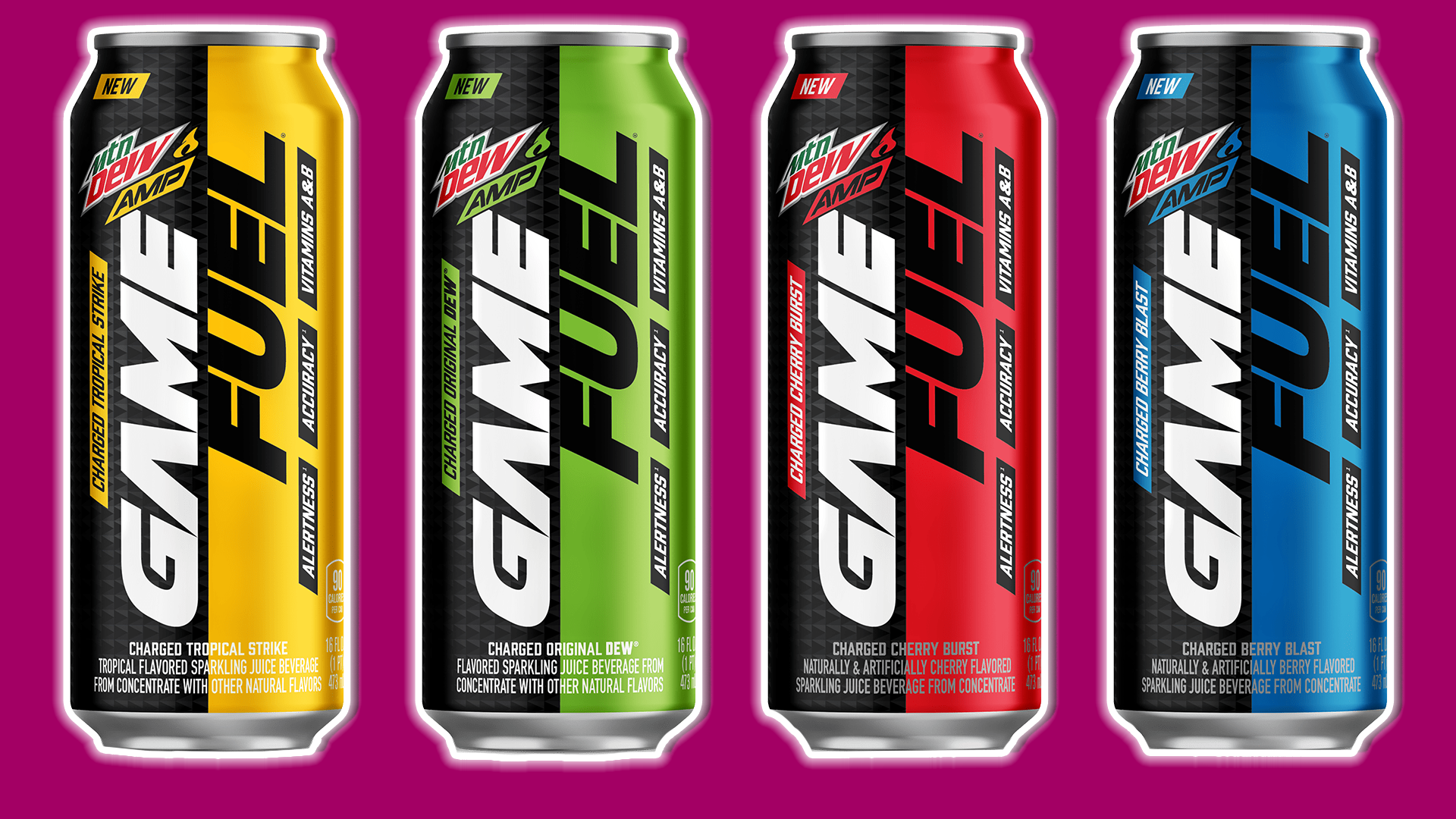 A few weeks ago I bought a can of Mountain Dew Amp Game Fuel and reviewed it. I hated it. It sucked. Evidently, this angered some people on the internet. I guess some folks really love Game Fuel? Between comments calling me names and people yelling at me for not liking an energy drink, some helpful folks suggested I try the other flavours. So I did just that.

To do this right, I decided to throw a gamer themed birthday party, invited some friends and bought a few cans of each flavour of Game Fuel. Then we tasted them, ranked them and then for some reason mixed them all together. It was a strange night.

There are four flavours of Mountain Dew Amp Game Fuel, which I will now only call Game Fuel for the rest of the article. It’s easier. The four flavours are Original Dew, Berry Blast, Cherry Burst and Tropical Strike. As I’ve already said on this website, I thought the Original Dew flavour was horrendous. But maybe these other flavours could change my opinion of Game Fuel? And now that I understand how to open the can, I won’t make a mess or annoy people on the internet for not getting how the weird cans work right away. 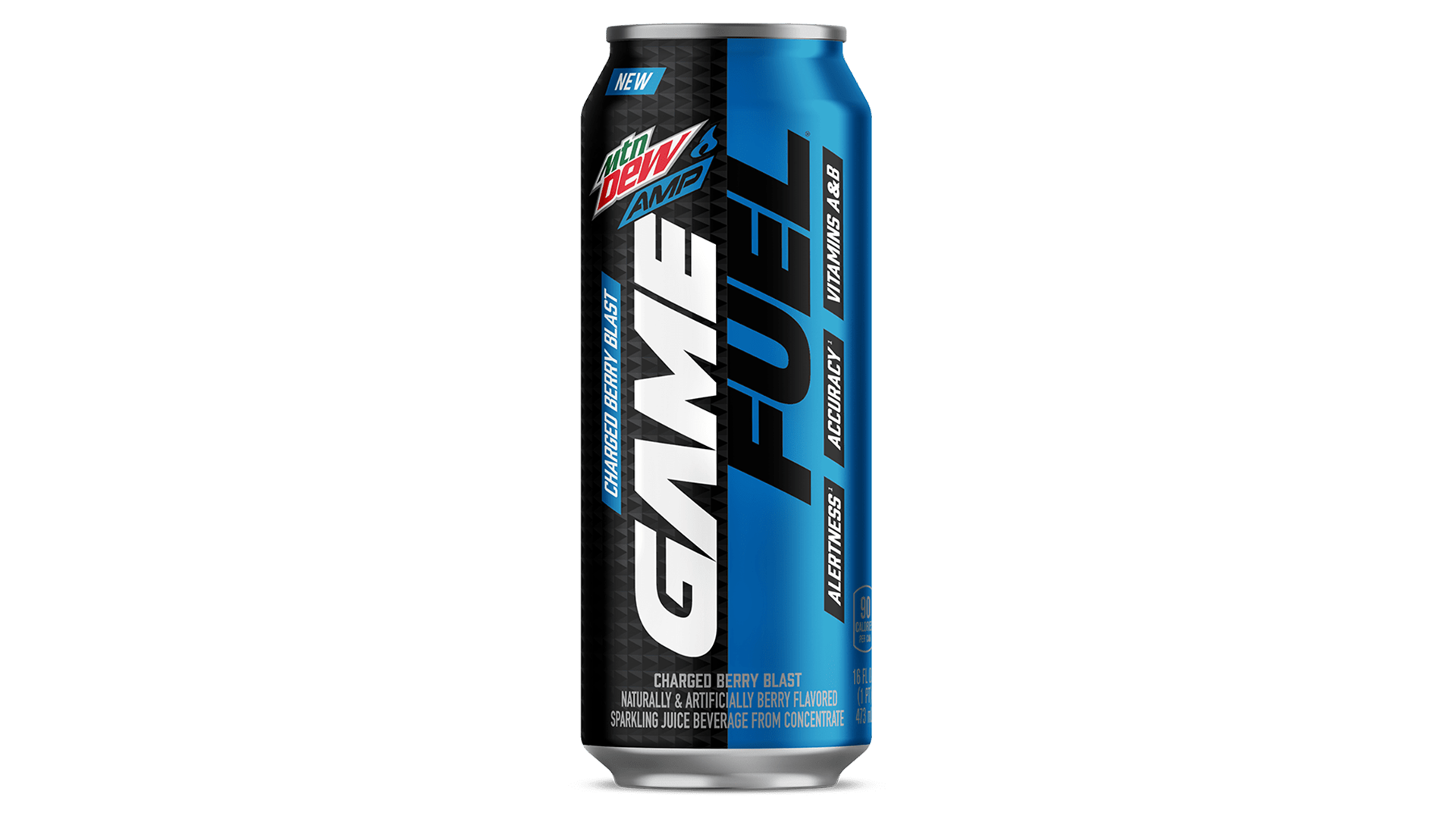 This was the first flavour we tried. It is, as the name implies, a berry-flavoured variant of Game Fuel. After drinking it, one of my friends seemed surprised. She expected it to taste much worse after reading my original Game Fuel review. I took a sip and was shocked. It tasted totally fine! I might even call it good? So far this was going better than expected. 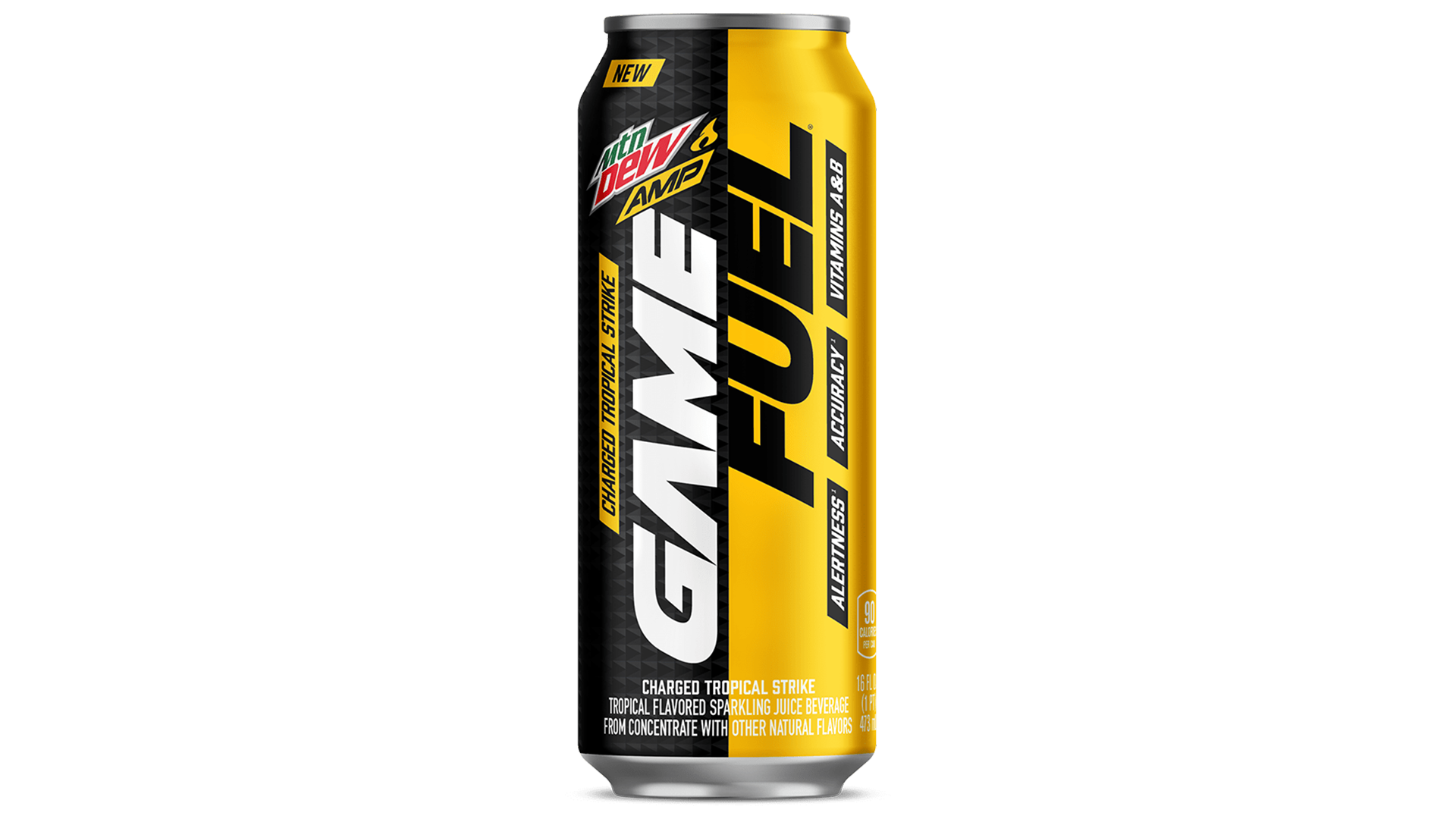 The next flavour we tried was the yellow can, Tropical Strike. Here my opinions split from my friend’s feelings on the drink. She likes the pineapple flavour and sweetness. I couldn’t stand it. It was bad. Not as bad as the original flavour I tried a few weeks back, but not much better. My girlfriend was also not a fan of Tropical Strike. “You better like pineapple, or you will hate this flavour.” I agree. 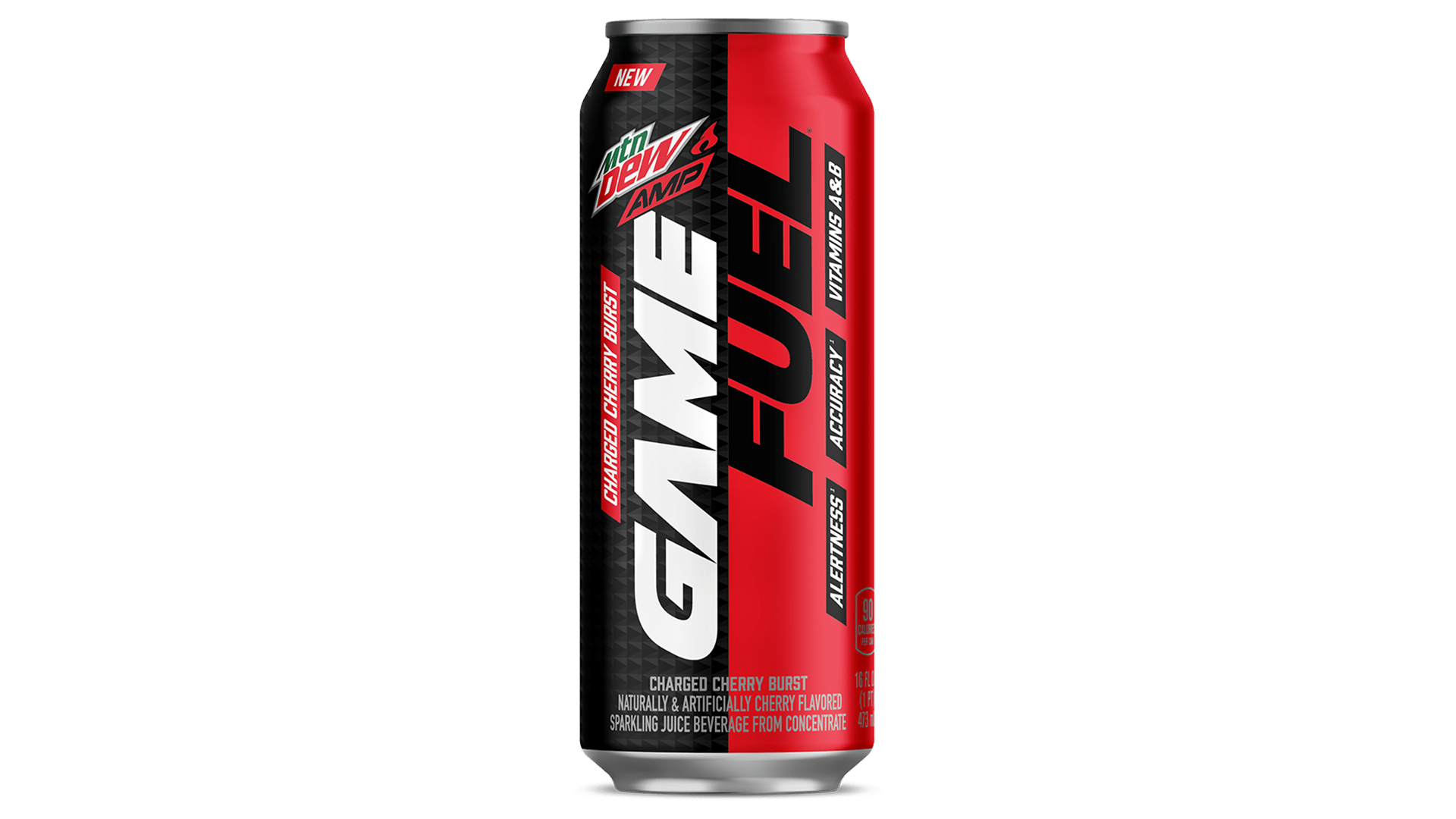 Here was the biggest surprise of the night. I didn’t know what to expect from the red can of Game Fuel we had in our fridge. It claimed to be cherry flavoured, which worried me. I’ve had some awful cherry-flavoured drinks. So I expected the worse and instead, we all agreed this was the best flavour of the bunch. Not too sweet, not too fruity and not too bitter. A really solid drink that I honestly might buy again. (Probably not though as I still prefer Monster for my energy drink needs.) 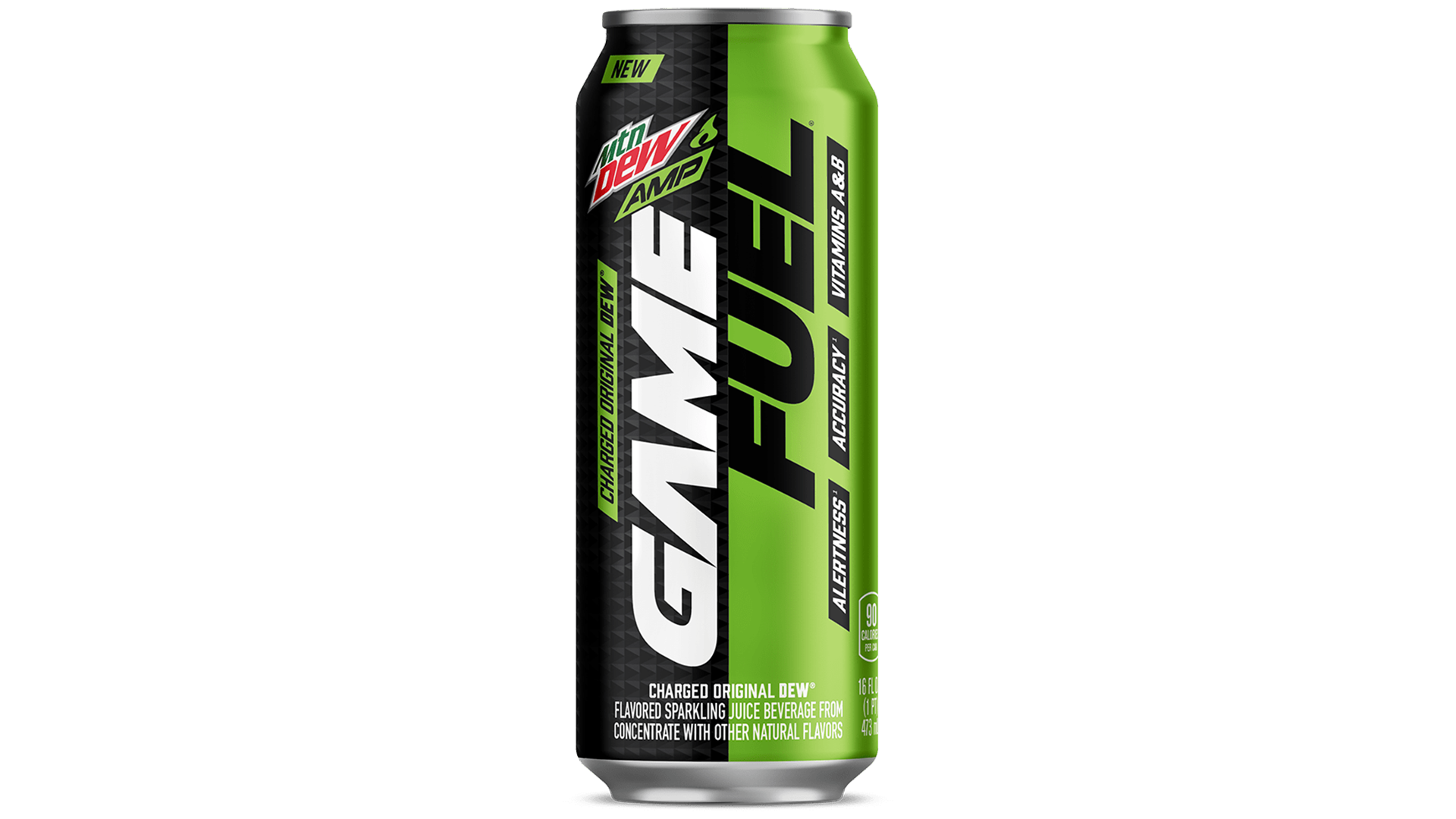 Of all the flavours, this should be the best one. Mountain Dew tastes good already. So adding some energy drink chemicals to it shouldn’t be too hard. And yet this is still the worst flavour of the bunch. After drinking it, one of my friends asked a simple, but valid question: “How did they fuck up Mountain Dew?” I don’t know. It is truly baffling how bad this tastes and I stand by my original review.

All The Flavours Mixed Together

At some point towards the end of the night, as the party was winding down and people were relaxing, one of my friends decided we should mix all of the Game Fuel flavours together.

This seemed like a bad idea, one which I was somewhat hesitant to partake in. But then she mentioned it was for the internet and I realised this is my life now and I had to do it. So we got two glasses and poured an equal amount of each drink into them.

After pouring three flavours into each glass the contents of the glasses was looking totally drinkable. Then we poured in Berry Blast and that was too much. Suddenly, to our horror, the drinks no longer looked like cups of soft drink. Instead, we now had two glasses of swamp water or sewer runoff. 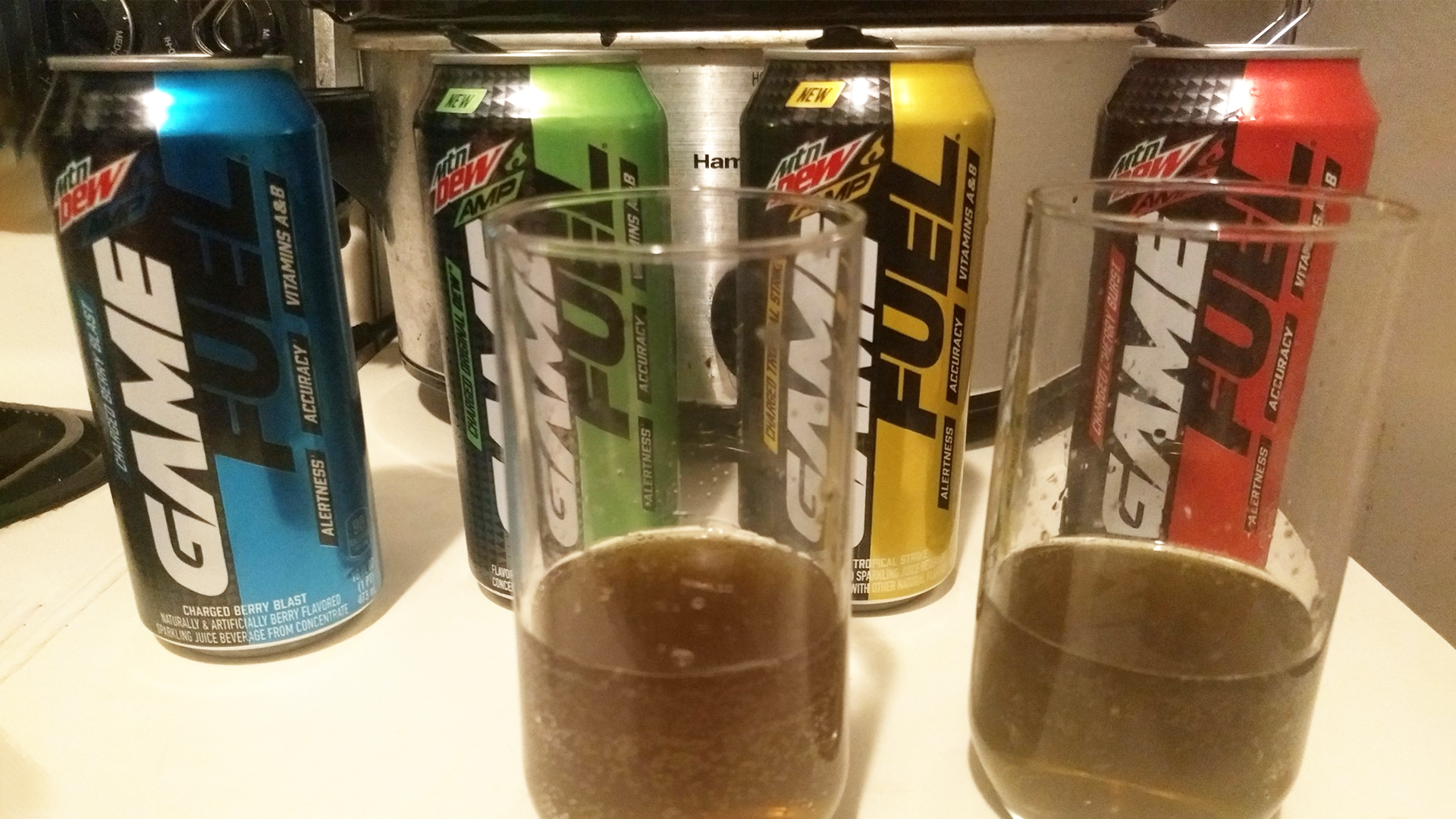 What happened? What had we created? Should we drink this?

These are all great questions that we didn’t ask. Instead, we grabbed the glasses of dark liquid and took big sips. Surprisingly, the end result tasted a lot like Mountain Dew Pitch Black. (The non-sour version.) I don’t know what that says about Pitch Black, but it was strange how inoffensive the final drink was after mixing them all together. I expected liquid death and instead got something truly unremarkable.

So after a night of Game Fuel and fun, I can confidently say two things. That original flavour I tried is still terrible and that some of the other flavours, like Cherry Burst, are good. I might drink them again.

Not anytime soon though. I drank way too much of this stuff in one night and I think I need to stick to water for a few weeks to let my body recuperate.