Yesterday, when WNBA star Breanna Stewart let her fans know she’ll be in NBA 2K20, coming out September 6, the top response asked whether the basketball game, which has a MyCareer mode, has a MyKitchen mode, too.

While a lot of fans agree and are expressing an overflowing enthusiasm for the memorialisation of these athletes’ talents, a contingent of oversensitive people are spewing vitriol all over NBA 2K social media.

Welcoming the WNBA to #NBA2K20 ???? Get an inside look at gameplay and hear what it means to @Candace_Parker & @BreannaStewart to officially be in the game

Here’s one of the most popular memes, which NBA 2K subreddit moderators told Kotaku they’ve removed many times over the last day: 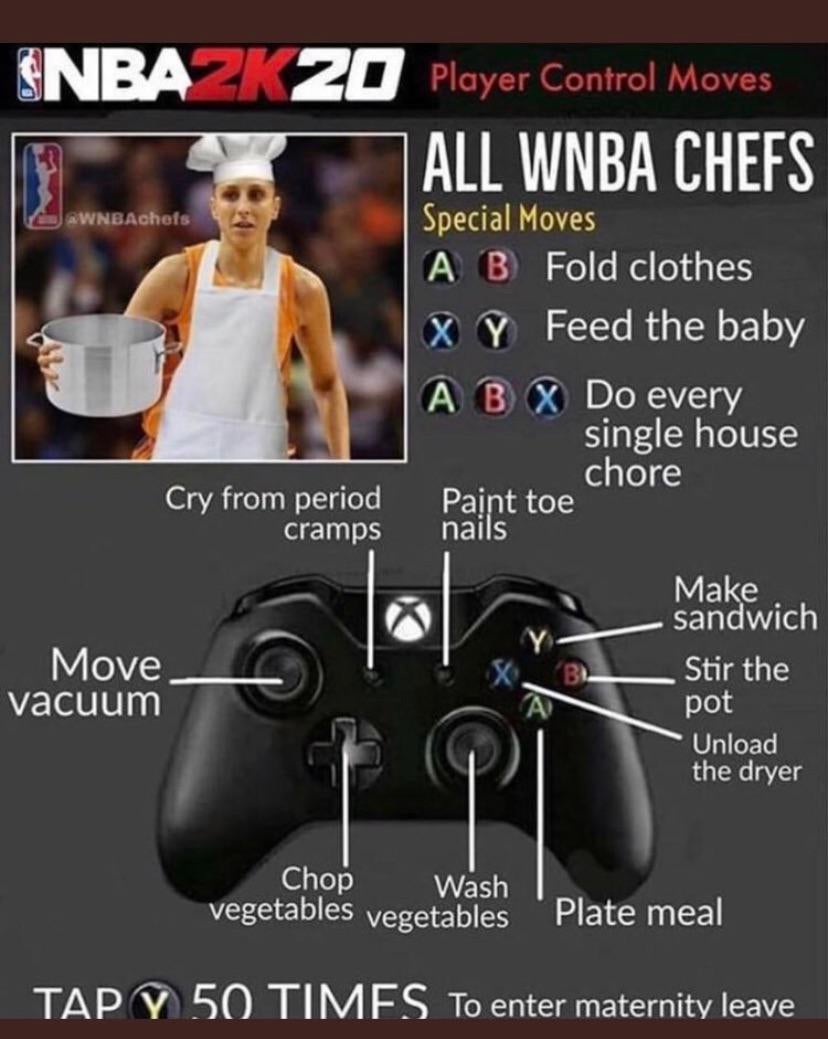 “As soon as the news dropped, there was a vocal portion of the community who was strongly against it,” said the head NBA 2K subreddit moderator, who goes by the online handle Yyy2k. “Some had reasons like how this was an unneeded feature that took time away from development of ‘more important’ things. Some went for sexist comments/jokes/memes making fun of women and WNBA players.”

He’s modded dozens of these over the last couple of hours, he says, in part because “Reddit and Twitter are both places where memes can trend in an instant and so far the ‘cool’ thing to do has been to make sexist comments”.

“Why are females in an NBA game?” and “This is a L we all know girls can’t hoop” are some of the comments below NBA 2K’s trailer on Twitter. Several fans have made the “MyKitchen” joke or other jokes about pregnancy in the MyCareer mode. A lot of men are loudly and emphatically complaining that they “don’t care”.

At least a dozen across social media platforms are saying that resources were unnecessarily dedicated to WNBA’ inclusion when they could have been spent on server reliability.

The comments section below 2K’s official blog post about the news is rife with comments about how, to preserve “realism”, the WNBA players can’t play on par with the male ones.

One of the other NBA 2K subreddit moderators, who goes by MrPeterson15, says he also moderates a subreddit for NBA Live, EA’s basketball game, which in 2017 also got WNBA players. “The reception was quite positive,” he said, adding that “Almost all Live players are either disgruntled former 2K players, or players who play both.”

Both subreddit mods are delighted by how readily community members tip them off to misogynistic posts, with Yyy2k noting that “There’s a pretty fine line between not liking an aspect about the game and just straight sexism”.

And yet, NBA 2K’s Twitter, Facebook and Reddit are aflame. It seems fuelled by derision for the WNBA itself, which is less financially successful than the NBA, and a dismissive attitude for women’s athleticism. Comments about how WNBA stars rarely dunk and therefore won’t be as exciting in the video game were common on the NBA 2K Facebook announcement.

Reached for comment, a 2K spokesperson told Kotaku, “Our franchise has always been rooted in capturing the true essence of basketball – it doesn’t matter who is playing – if you love the game, you love the game. As true lovers of basketball, we take great pride in bringing the women’s game to the millions of NBA 2K fans around the globe.”

Over on Twitter, another wave swelled on the opposite coast as the haters. Under WNBA star Candace Parker’s announcement, one post echoed several others: “We need a WNBA video game!!!!”