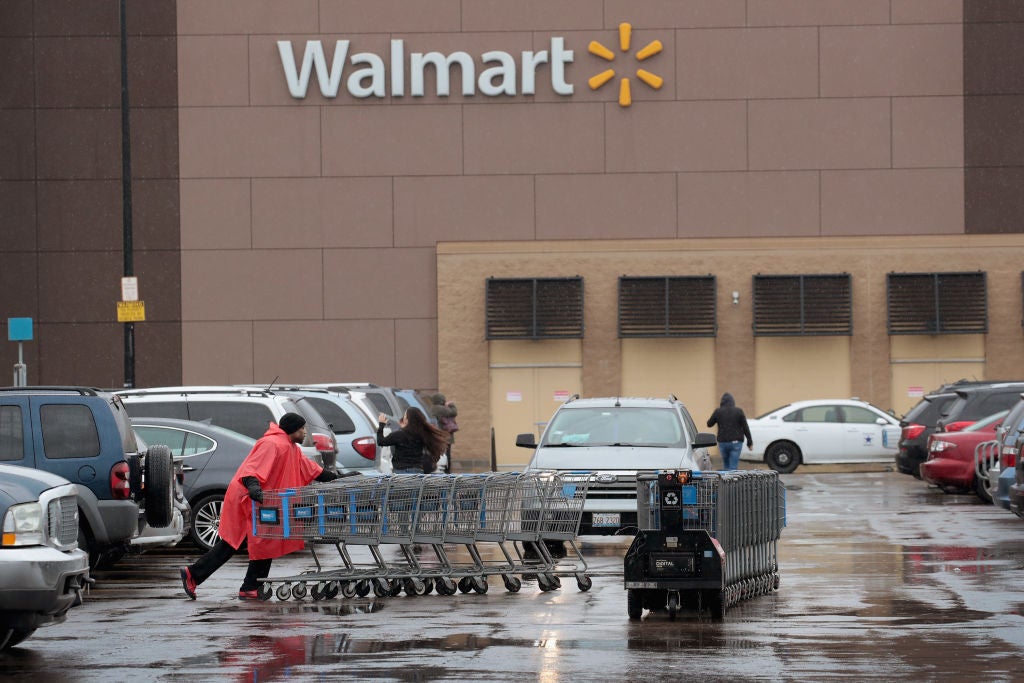 A Walmart store in Chicago, Illinois. (Photo: Scott Olson/Getty Images, <a href="https://www.gettyimages.com/detail/news-photo/worker-collects-shopping-carts-outside-walmart-store-on-news-photo/903923914?adppopup=true">Getty Images</a>)
To sign up for our daily newsletter covering the latest news, features and reviews, head HERE. For a running feed of all our stories, follow us on Twitter HERE. Or you can bookmark the Kotaku Australia homepage to visit whenever you need a news fix.

One day after Walmart asked employees to remove signage for “violent” video games, a news report said that Walmart is going one step further and ceasing sales for most video games. According to a Walmart representative speaking with Kotaku, that is not the case.

“It is not true,” said a Walmart rep over the phone today, while clarifying what moves Walmart has taken in the wake of mass shootings this past weekend, one of which resulted in the deaths of 22 people at an El Paso Walmart store.

Memos sent to employees over the last few days instructed them to remove “any signing or displays that contain violent images or aggressive behaviour,” Vice first reported.

But after a photo tweeted by a gamer and voice actor named Erik Louden showed near-empty games shelves at Walmart, speculation arose that the retailer was also removing violent games from sale. The website IGN reported as much, citing a statement from Walmart:

“We’ve taken this action out of respect for the incidents of the past week, and it does not reflect a long-term change in our video game assortment. We are focused on assisting our associates and their families, as well as supporting the community, as we continue a thoughtful and thorough review of our policies.”

That statement was also sent to Kotaku when we sought confirmation for IGN’s report. It had also been provided to reporters asking about Walmarts’ memo regarding games signage and appears to actually only have been intended to address that.

Shortly after we received that statement, however, another Walmart rep told Kotaku: “We have not given direction to date to remove titles.” IGN has since updated its story with a correction.

Shootings at Walmart stores in Texas and Mississippi over the last two weeks have led to the deaths of two dozen people. President Trump afterwards would partially blame the wave of mass shootings, including one this past weekend at a bar in Dayton, Ohio, on “gruesome and grisly video games that are now commonplace”.

Louden’s tweet included a photo that showed display cases largely empty of any games. The remaining games included several E-rated Nintendo Switch titles. Louden wrote, “Mine is not even selling the games anymore (temporarily) and I’m seriously upset. Like where am I supposed to buy a physical copy now? The nearest GameStop is way too far away from me.”

It is possible that Walmart employees and managers across the US are responding in personal and specific ways to Walmart’s directive to “use your best judgment when determining whether an element is appropriate”.