Noelle Stevenson On She-Ra’s Shocking Twist, Shorter Seasons, And What’s Next In Etheria

She-Ra and the Princesses of Power returned packing a short but powerful punch. The six-episode season felt like a long movie, telling an epic story that raised the stakes in a big way — for both our heroes and villains. So, what does it all mean, and what’s next? Gizmodo asked showrunner Noelle Stevenson to weigh in.

In their condensed, spoiler-filled interview, Stevenson shares her thoughts on Catra as a dual protagonist, the martyr complex in Chosen One narratives, and her recommended way to watch season three. She also told Gizmodo her reasons behind making the portal do “that,” and the big shocker of the season. There was a lot to cover, so let’s dive in.

Gizmodo: Season three didn’t really have any standalone episodes like season two did. It was one long thread. Did you envision this more as a movie, or as something else? What was your process?

Noelle Stevenson: When we were first breaking down this season, we intended it to be one season along with season two. So it was first broken down as a drop of 13 episodes. We found out there were plans to break up the season, so we could bring them to viewers on Netflix more often. It exists as “Season 2.5.”

Gizmodo: Do you feel it was the right choice to break it up, or would you have rather kept seasons two and three together?

Stevenson: We’re sort of reinventing how we bring cartoons to audiences, now that they’re being streamed on these streaming services. One of the potential issues [of streaming] is that you drop all the episodes and then it’s done, and everyone kind of binges it. You’re absorbing a lot of information really quickly. The idea of breaking up the season — so it does give people time to theorise and come up with ideas of what’s gonna happen next, instead of getting those answers right away — it’s definitely kind of one way of dealing with that potential issue.

In this case, I think we probably would’ve broken the season a little differently in hindsight. But I would recommend viewers watch seasons two and three together as one long runner. It should be like a really fun watch, with the threads that carry over those 13 episodes.

Gizmodo: Adora struggles a lot with identity and choice this season, as she learns she’s actually a First One who was brought to Etheria through a portal. How would you describe her journey so far?

Stevenson: Adora occupies this sort of classic hero’s journey archetype of the Chosen One. When she was being raised in the Horde, as part of this army, a child soldier, she was still being raised as this chosen one. She thought that her destiny was very clear cut, very predictable. She knew was she was supposed to be and she believes in that very strongly. When she ventured outside of her experience, she stumbled into a different chosen one destiny, with She-Ra.

I think that she’s really struggling with that. She really really wants to be the best She-Ra she can possibly be, but she doesn’t want to make the same mistakes she did last time — when she thought she was in the right, when she was really in the wrong.

Gizmodo: We also see Mara, who explains to Adora why she separated Etheria from the universe. Can we expect to learn about more She-Ras in the future? And will they be different ethnicities or gender identities?

Stevenson: I will say that we focus a lot on the relationship between Adora and Mara, those are the main She-Ras we discuss. Stay tuned, there’s a lot more to come.

Gizmodo: This season paid off Catra’s struggles in a big way. She tried out life by herself in the Crimson Waste but was pulled back in by her need for validation, and she chose to activate the portal rather than let Adora be right once again. Was this always where she was leading, or did her journey evolve through the storytelling?

Stevenson: When I pictured the series, I pitched a complete story arc with the characters, like major beats already kind of nailed down. But within that, I think our approach to the characters — we’ve set up the major plot points, and then we see how the characters react to them. That’s how I personally write. It helps to know what story you’re telling and where you’re going and generally what ending you have in mind. Once you have that set out, you look to see how your characters behave, and I think there are some surprises along the way.

For Shadow Weaver, all the plans I had for her, she’s bucked basically all of them. And I think Catra is someone, she’s one of them too. I see her as almost a dual protagonist to Adora. While Adora is on this path of becoming a hero, Catra’s on a darker mirror path of that. I think Catra has really surprised me in a lot of ways too. A lot of that comes from the voice acting, the writing, and the board artists. I’m really excited for her arc coming up. There’s a lot still in store. 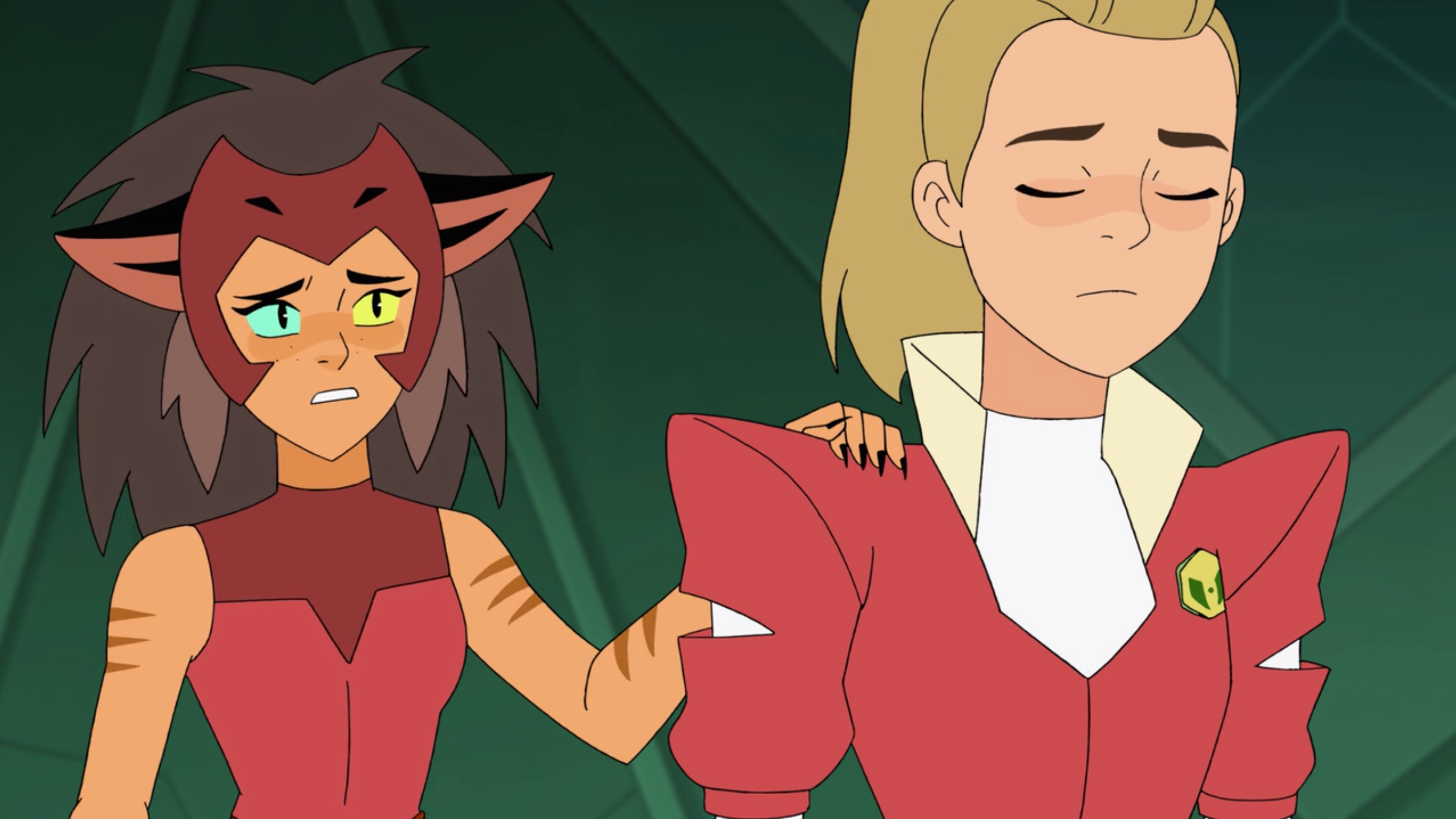 This isn’t something we see every day. (Image: Netflix)

Gizmodo: Out of all the things I expected the portal to do, a “What If?” episode — bringing Adora to a reality where she’d never left the Horde — was not among them. What made you decide to take this route?

Stevenson: [laughs] I think that it was something, it felt like we should do. Especially with what Adora and Catra are struggling with this season. We’ve gotten so far from where we were in this pilot episode — them in this much more childish way, a lot more carefree. I think both of them are sort of, they’ve gotten so far from it, but they’re still so hung up on it…Catra is turning into a person that I don’t think she ever expected to be, and someone she doesn’t even think she’d recognise.

They both have reasons to go back to the beginning. Where Catra wants to hide from everything she’s done, and Adora’s going, “How can I go back and fix it?” Throwing them back and asking those questions again: Who were you then, who are you now? It was something I wanted to do, something that was unexpected

The portal was such a great opportunity to try something really weird and different, also while asking questions about our characters and delving a bit more into their interiority and how they’re processing what’s happening.

Gizmodo: Even though Adora’s storyline is about choice, in the end, the final choice — to close the portal and sacrifice herself — is taken away from her by Glimmer’s mother, Angela. What was the reason behind having Angela sacrifice herself instead?

Stevenson: Adora is this person with kind of a martyr complex. She’s always worried she’s not doing it right. I think what we wanted to say was the answer is not that simple. It might be really hard to figure out the right thing to do — you might hurt people, even when you have good intentions.

Adora, she’s got a lot of story left to tell. She has to use her power as She-Ra to try and help people. It’s not enough [to say], “OK, if I just throw myself on this sword, then I can fix everything and then I’ll be this martyr and everyone will be proud of me. I’ll have done it right this time.” It’s more complicated than that for her. She has to stick around because they need her. Angela knew that and trusted Adora — and trusted Glimmer to run things after she’s gone. It’s not something that she can hide from.

Gizmodo: The season included the shocking revelation that Hordak, our supposed Big Bad, is a clone of a much-greater enemy — one whose eye is now pointed squarely at Etheria. Is Horde Prime’s arrival going to unite our heroes and villains, or will it further drive them apart?

Stevenson: I think that we throw a lot of really big status quo out the window. Not only is Angela gone, which is obviously going to have huge implications for Glimmer and for the whole rebellion and the Horde, but we’ve only been focused on Etheria so far. There haven’t been any other planets or intergalactic visitors. There is this much, much bigger conflict going on outside this hidden empty dimension that they’re in.

There is so much ground still to cover with what that actually means. That’s going to be what the next season about. We want to push our characters out of their comfort zone… I can’t go much deeper than that. But what I can say is the way that all of this plays out is so epic. The characters’ relationships are going to change, their relationshIp to the world is going to change, and we’re going to see so much more in the future.