Demoed in 2017 and released in its final form on Steam earlier this year, PC Building Simulator is a game that puts players in charge of their own computer repair shop. Customers send their systems in for maintenance, upgrade, or repair. Players order and install parts, run virus scans, clean dust (ew), and eventually build gaming PCs from scratch.

The game captures the spirit of fiddling around inside computers wonderfully. Players have to remove individual screws, attach cables, install motherboard posts, pull out hard drive bays — all the good stuff. I’ve played the Steam version of Claudiu Kiss and the Irregular Corporation’s virtual PC maintenance wonderland extensively and loved every minute.

Last week, PC Building Simulator came out for the Xbox One, PlayStation 4, and Nintendo Switch. I’ve been playing the Switch version since it dropped, and I’m not sure I will ever adjust to the disconnect I feel fiddling with licensed PC parts on a game console. 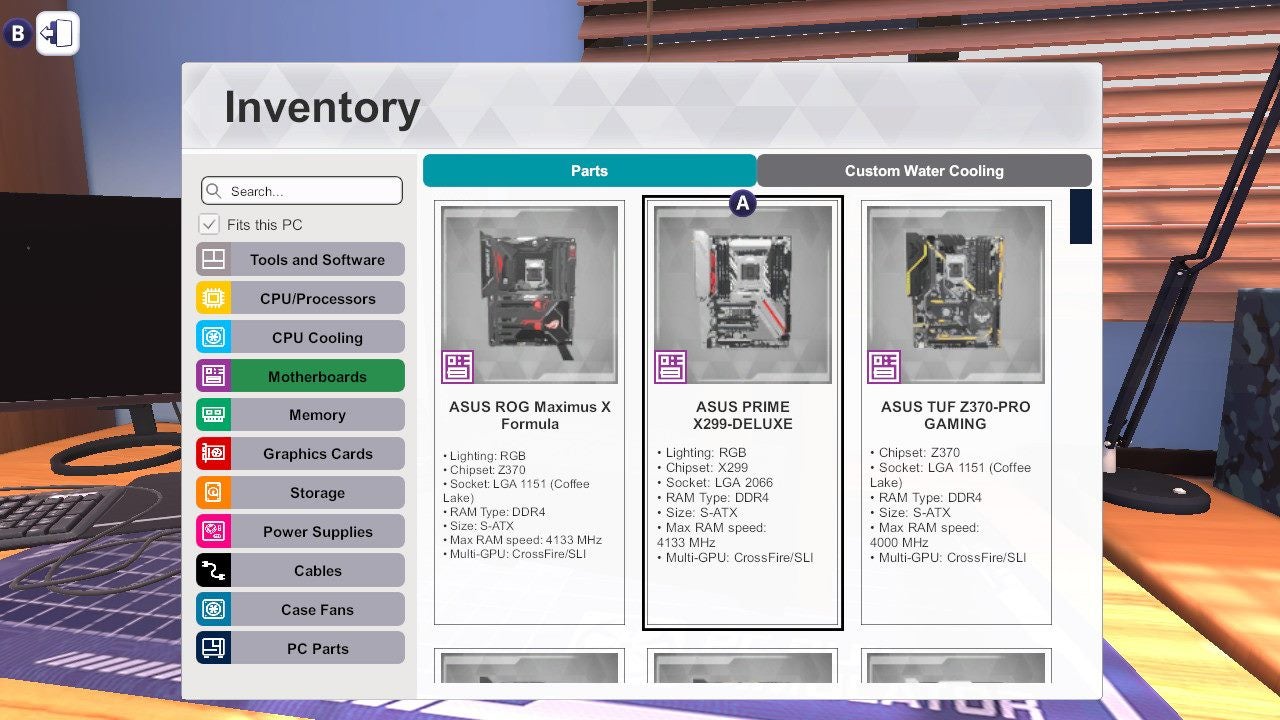 PC Building Simulator is a smorgasbord of real-world PC hardware. Hardware makers from AMD to Zotac hopped at the chance to have their components featured in a game that’s essentially an interactive advertisement. One of my favourite things about playing the Steam version of the game was getting as close to my real-world gaming PC build as possible, creating a sort of Inception scenario. That doesn’t work on the Switch.

Instead of mouse and keyboard, I am using the analogue sticks on my right and left Joy-Cons to manipulate my PC builds. The left analogue stick is the mouse cursor, which is awkward. I have to move the cursor over a disconnected cable, press a button, move the cursor to the port the cable needs to be connected to and press another button.

The simple act of hooking up a PC for testing — connecting the mouse, keyboard, monitor, and power — is an awkward analogue back and forth that highlights why I prefer playing these sorts of games on a PC in the first place. 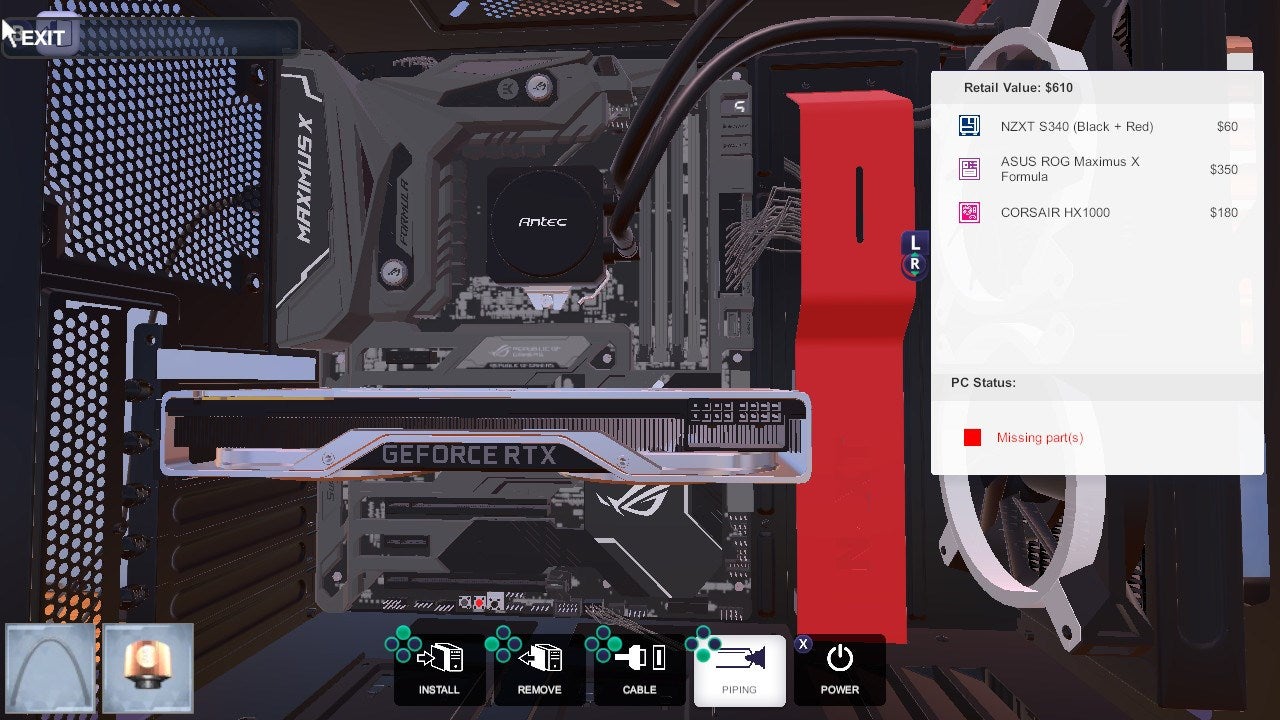 It’s awkward, but it’s almost a charming sort of awkward. As I install my Nvidia Geforce RTX 2080 Ti card on my Maximus X motherboard, two parts I used to build my real-world personal gaming PC, there’s a constant, giggling voice in the back of my head telling me how wrong and dumb it is to do it this way. On a console. In portable mode. While sitting in front of a perfectly workable gaming PC.

Of course there’s also the convenience. The Switch version of PC Building Simulator puts a massive inventory of parts at my fingertips. The game’s free building mode gives me access to everything, letting me put together a dream rig out of parts I could, were I inclined and financially capable, purchase and assemble in real life.

It’s the ultimate PC configurator, now in convenient non-PC form. And should the disconnect between PC and console threaten to overwhelm, I can always step back in-game and turn to the left of my virtual workstation. 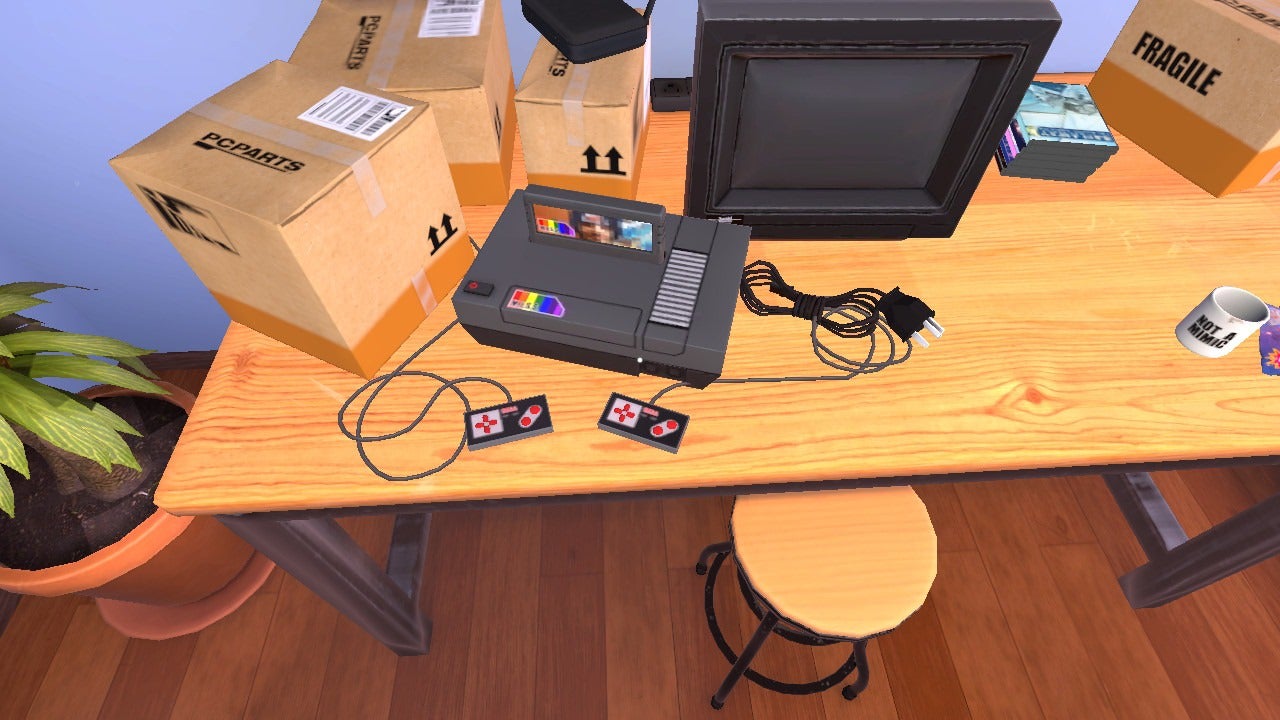 The virtual console doesn’t work, but that’s one thing that feels less weird on the Switch.