The Pokémon Company announced late yesterday that it’s banning one of the Pokémon trading card game’s newest cards at this year’s World Championship. That’s because this card introduces some potential language barrier issues between international players that would, overall, make it a huge pain in the arse if anyone decided to actually try and use it.

Blaine’s Quiz Show is an uncommon supporter card that debuted in the game’s latest expansion earlier this month, and while it’s an incredibly cute and creative card, it’s also easy to see how it could bring an international match to a screeching halt, since it relies on precise communication.

Here’s the full text on the card: 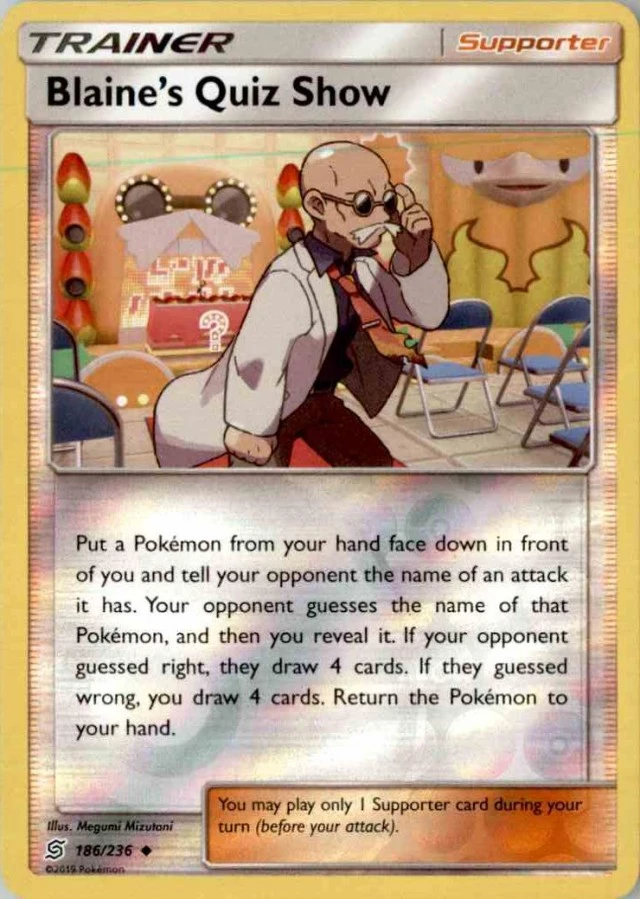 While seemingly straightforward, there are a number of scenarios in which things could go awry if the card was being used between two players who speak different languages and are using translated decks. Pro player and former North American champion Stéphane Ivanoff explained the potential confusion that might ensue in a Twitter thread from late July (via the fan site Pokébeach).

“Lillipup (BLW 81) and Gliscor (UNB 99) have the same attack Collect,” he wrote. “In French, Lillipup’s Collect was translated to ‘Collectionner,’ and Gliscor’s Collect was translated to ‘Collecte.’ If I play against a French-speaking player and announce ‘Collectionner,’ they know it can be Lillipup and not Herdier. If I play against an English-speaking player and announce ‘Collect,’ it can be both. This means that doing the exact same game action has different results depending on the language used.”

Ivanoff noted that while translators could be kept on hand to help players get around these issues, it could potentially slow things down. And even if the odds of these particular scenarios arising is unlikely, banning the Blaine’s Quiz Show card is, at least in Ivanoff’s opinion, a small price to pay for reducing that probability to zero.

Of course, why the ability “collect,” which lets a player draw a card, was translated into a French verb in one instance (collectionner) and a noun in the other (collecte), remains a mystery best left to Pokémon language detectives.

In any event: sorry, Blaine’s Quiz Show. The card was a cool idea, at least, and maybe someone will now be inspired to concoct a competitively viable deck based around you. The Pokémon World Championship takes place from August 16 to August 18 in Washington, D.C..