Powers Of X #1 Paints A Bold, Bonkers Future For The X-Men

A few weeks ago, Marvel ushered in a fascinating new era for its X-books. House of X, from Jonathan Hickman, Pepe Larraz, and Marte Gracia gave us a haunting, alien glimpse at the new status quo of mutantkind. But its new sister series, Powers of X, presents a wild far future born out of the ramifications of that status quo.

To get into what precise level of bonkers Powers of X #1 — by Jonathan Hickman, R.B. Silva, Adriano Di Benedetto, Marte Gracia, Clayton Cowles, and Tom Muller — is aiming for, you first have to realise… how to pronounce its title?

You see, Powers of X is not, like its sister series House of X or like an endless litany of prior X-series, pronounced as “Powers of /?ks/.” Its concerns are less x-gene and more algebraic, as the very first page of the issue reveals. It’s actually “Powers of Ten.” Those simple formulae serve as the spine Powers of X #1 sets four distinct time periods over:

We get brief check-ins with the first two timelines in Powers of X #1. X? gives us what is meant to be the first encounter between Charles Xavier and Moira MacTaggert, his former fiancée and an expert in mutant genetics, but quickly reveals that not all is as seems with either Charles or Moira.

X¹ is likewise short and cryptic, revealing that Mystique’s mission to raid Damage Control’s archives in House of X #1 wasn’t as lone-wolf-villainous as it first seemed, but a mission for Xavier and Magneto, hinting that things aren’t quite so idyllic in their new paradise.

But Powers of X #1 is more interested in the future, and spends most of its time setting up the status quo of the X² and X³ timelines. And it’s where the whole issue becomes a template for something truly wild and grand. 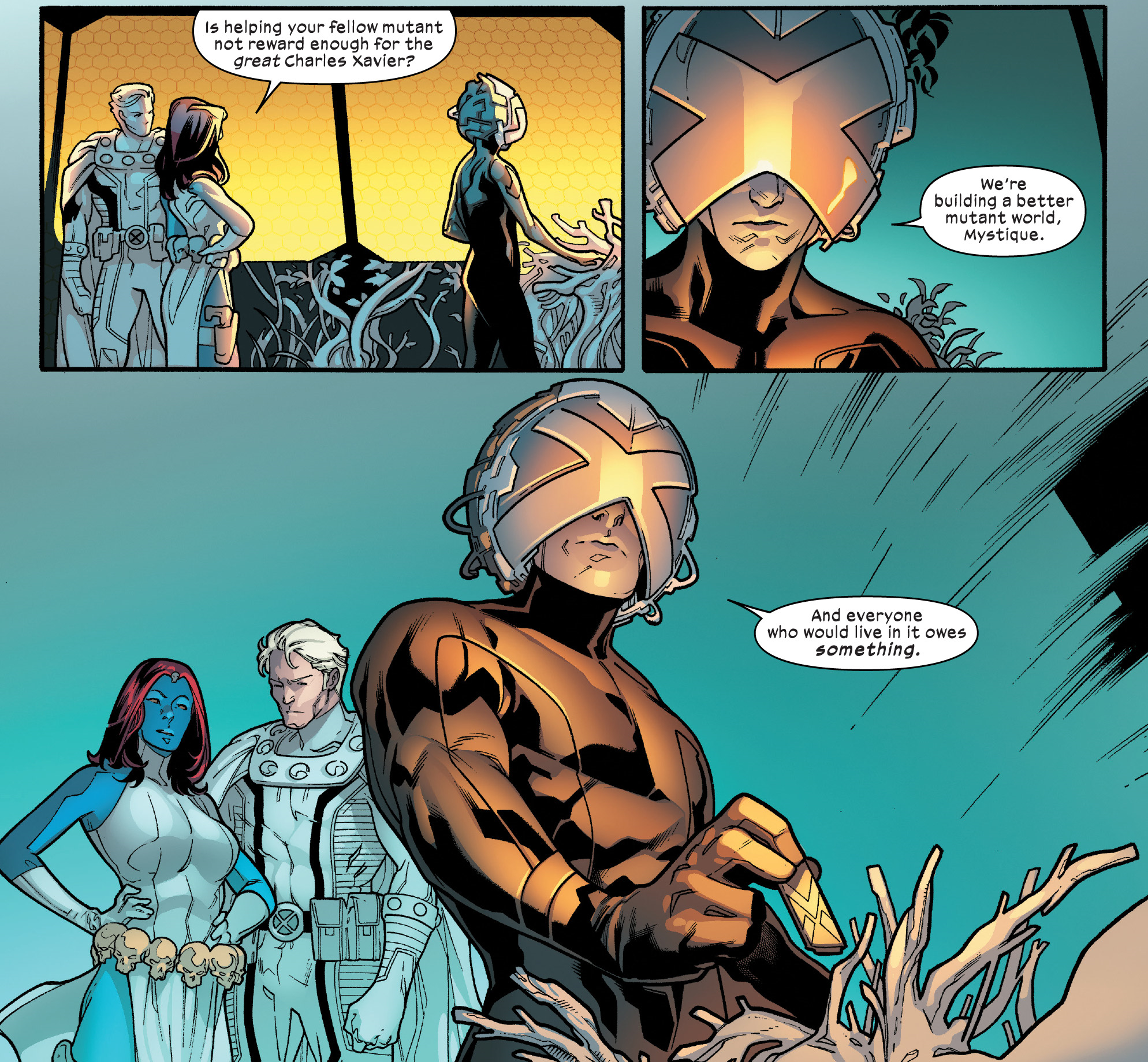 Not all is so perfect in paradise after all. (Image: R.B. Silva, Adriano Di Benadetto, Marte Gracia, Clayton Cowles, Marvel Comics)

The X² timeline reads as something familiar to any X-fan who can remember countless alternate realities and timelines in prior stories, a world where ascendant mutants have been cut down in a brutal war with humanity, and are once again on the run and persecuted.

What is new to what Powers of X #1 presents as the Mutant-Human-Machine War is that both sides of the conflict have been irrevocably transformed by it, to the point that it all feels less like a skirmish between powers and more like an existential crisis.

Interludes once again delivered in the clinical, austere design work of Tom Muller fill us in that, in the years between the present and the future of X², mutant kind’s dominance stretched beyond Earth and onto planets as far as Mars.

But after the wonderfully vague “senior leaders” of mutantkind mysteriously perished or vanished, the remnants of authority over mutants decided to work with infamous X-Villain and master geneticist Mister Sinister to establish a new militia of lab-grown mutant soldiers to defend Krakoa and its interests, as humanity violently pushed back in wake of mutant overpopulation.

At first, these soldiers were simply clones of specific mutants, troopers fed into the grind of war after war, but later generations developed into “Chimeras,” hybrid beings that were amalgams of various powerful mutant traits to create elite teams of new X-Men. 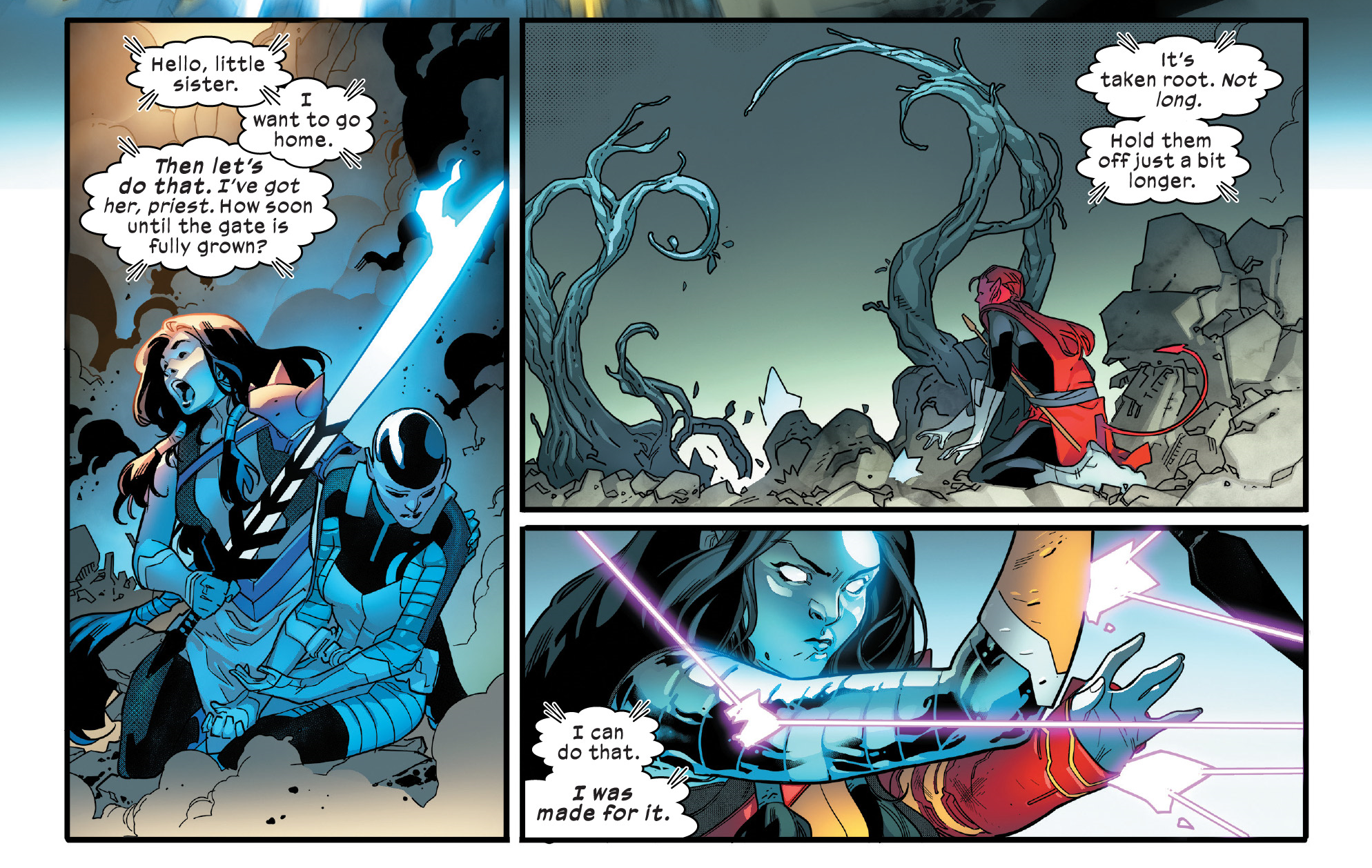 We meet a few of these clones, like Rasputin — a hybrid of Quentin Quire’s telepathy, Colossus’s metal morphosis (and a sword that looks an awful lot like his sister Magik’s soulsword), Unus the Untouchable’s forcefield projection, Kitty Pryde’s intangibility, and X-23’s healing factor and Cardinal, whose specific traits are unknown, but seemingly borrow a lot from Nightcrawler, right down to the demonic features and crippling catholic guilt — on a recon mission gone wrong.

They represent a few of the last surviving Chimeras after the generation Sinister made beyond them developed what the interludes note as a “corrupted hive mind” which, as part of Sinister’s defection to the side of humanity, “committed mass suicide, collapsing Mars, the sinister pits, and themselves in a mass-singularity.”

Yeah, that’ll happen when you trust Mister Sinister with running your cloning programs. It’s in the name, people!

Anyway, Sinister was apparently executed by humanity after defecting from his fellow mutants in such an explosive fashion, and just 10,000 mutants remain in existence across the universe, returned to their status as hunted refugees of a battle that has consumed the galaxy. You’d think that counts as a “win” for humanity, but it really, really doesn’t: because in the process of rapidly elevating this future fight with mutantkind, humanity has likewise been considerably transformed.

They’re not longer capital-H Humanity, but the Human-Machine supremacy, a cybernetic hybrid of sentinel tech and biological parts that, in the upper echelons of their command — including Nimrod, the advanced, alt-reality Sentinel from Days of Future Past — barely look human. As Rasputin coldly notes at one point in Powers of X #1, not acknowledging the irony of saying it as a literal chimera of other beings, machines have no soul, and humanity lost its own a long time ago. It paints a picture of pointlessness: mutant hybrids versus human hybrids, fighting on the behalfs of people beyond them all too familiar with the repeated rise and fall of conflict between humankind and mutantkind.

It is even made textual by Nimrod’s capturing of mutants to break them down into a living, genetic library of what mutants are, and what they’ve become in the process of this latest conflict. To define what a Mutant is, is to archive a cycle of conflict that spans decades.

That spans centuries, as we move to the X³ timeline a thousand years beyond the dying days of the Mutant-Human-Machine War. By this point, an advanced version of Nimrod himself has seemingly had a change of heart, mournful that this archive he created during the conflict’s peak is at this point degrading, working with an unknown alien being known only as the Librarian — who has an intriguing helmet similar in design to present-day Xavier’s version of Cerebro — to try and save the souls within it.

Both Nimrod and the Librarian make the bleak pointlessness we witness in the X² timeline explicit; with the war’s end behind them (cryptically only described as having ended in a “surprising” manner no-one could’ve expected), what meaning can be derived from the ashes that remain? All the war has become is an empty monument, one Nimrod and his mysterious ally now curate — a grim legacy of a past that can never be escaped. 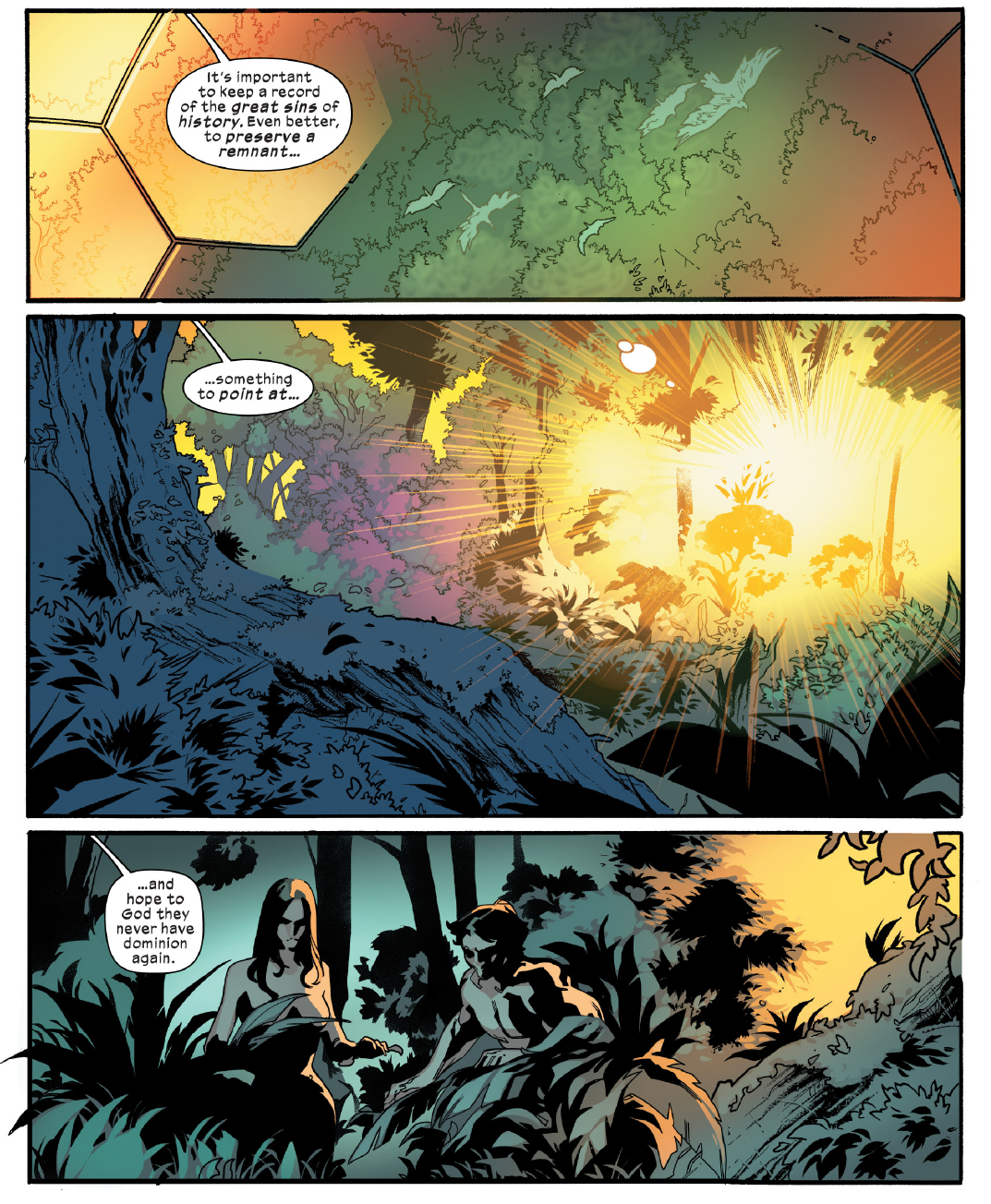 Everything that has happened before, will happen again, and so on and so forth. (Image: R.B. Silva, Adriano Di Benadetto, Marte Gracia, and Clayton Cowles, Marvel Comics)

It’s hard to say what we’re really meant to take from the final page reveal of some mysterious figures lurking about in Nimrod and the Librarian’s monument to mutantkind’s legacy — a living reminder, as the latter puts it, to preserve a lesson about mutant domination.

Are they the same beings we saw Charles Xavier summoning out of pods in the disconcerting opening of House of X #1? If so, how did they get flung into the future? Are they merely copies in this living library of them? Are they something else? Whatever they end up being — other than clearly important to the ongoing story playing out across these sister series — they are just another example of the cycle being hinted at throughout Powers of X’s grand design.

From the repeated imagery of the Tarot cards — a medium itself fascinated and bound by the idea of the cycle — in the past, to the four timelines themselves all essentially being repeated stories of mutant survivalism, to the bitter repeated futility of war, hell, to the very idea of Nimrod’s database of mutant history being a living one, Powers of X #1 is fascinated with cyclical storytelling.

Which makes sense, because there has always been a feeling of an almost-rote cyclicism in X-Men storytelling ever since they were created: They are the perpetually persecuted trapped in a cycle of hate. Any time that changes, and mutantkind begins a bold new era of acceptance and prosperity, it inevitably ends in fire and blood, beginning once again a cycle where mutants are downtrodden and ever-fighting, ever-chasing that dream of not just survival but acceptance.

We’ve reached the point in Powers of X where that conflict has become so repetitive and so inevitable that both sides are just alien husks of themselves, fighting a war sparked by the people that came before them for little reason other than that’s what they were created specifically to do. 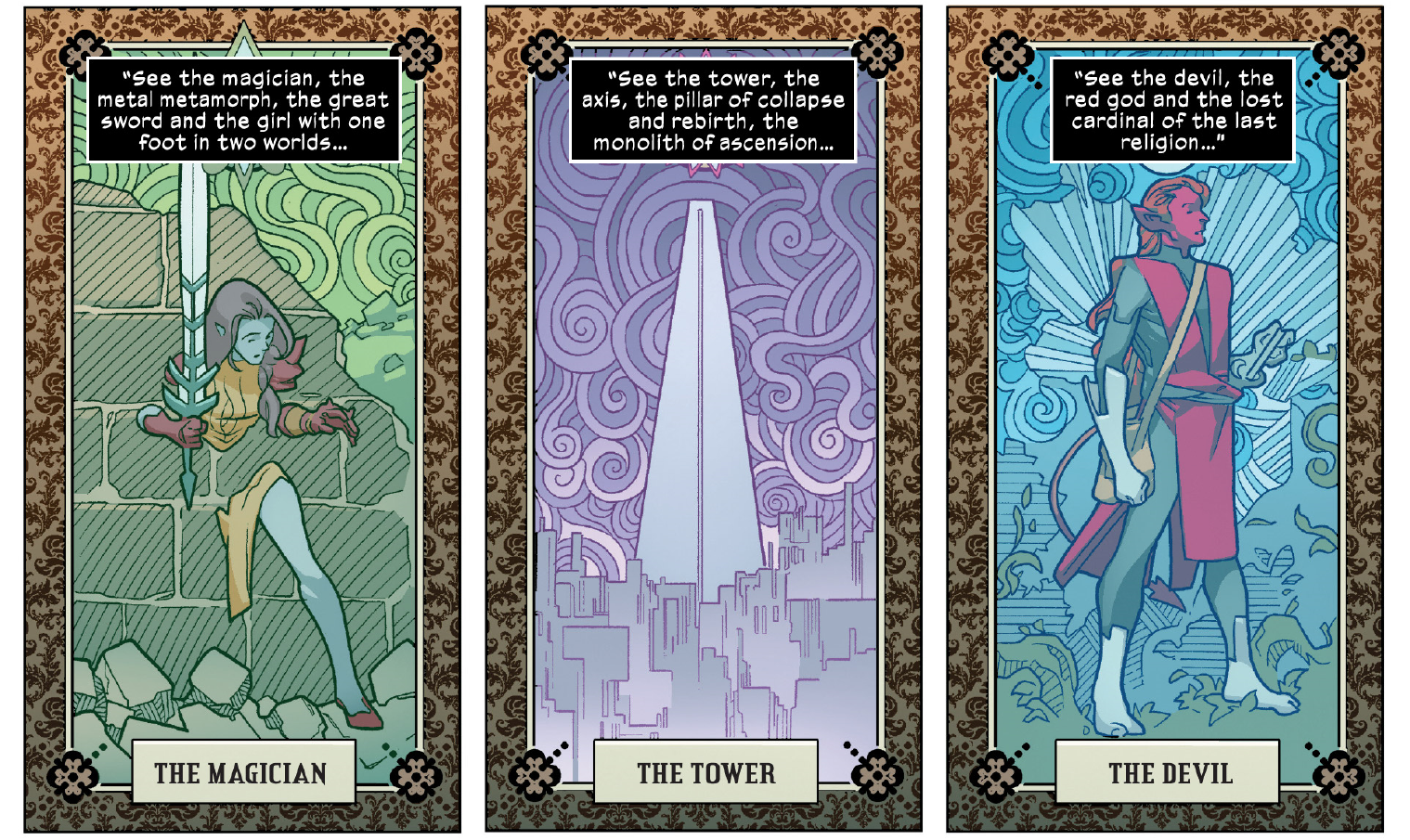