Princess Peach Was The Best Character In Super Mario Bros. 2

The dreamish landscape of Subcon is a surreal romp with some of the strangest enemies in the series. Influenced by Arabian themes, the second Mario game didn’t start off as the sequel to Super Mario Bros., a story that most people reading this probably know. But in my eyes, it was the Mario game I longed for the most, thanks in large part to the marketing campaign in Nintendo Power magazine. I remember receiving the first issue of Nintendo Power and being in awe that a sequel to Mario was coming out. I had to get my hands on it. 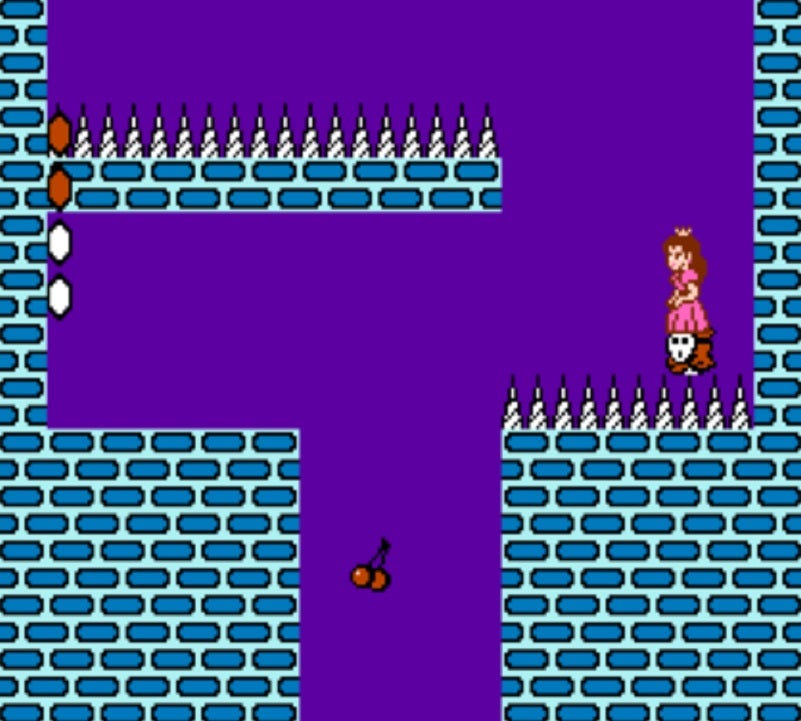 Starting up Super Mario Bros. 2 as a player, I had to unlearn everything I’d learned in the first Mario. Jumping on enemies no longer crushed them. If anything, they seemed oblivious to your presence, pacing back and forth even when your character is standing atop them.

The new gameplay mechanic was all about picking things up and throwing them, either weaponised vegetables that you pulled from the ground, or the enemies themselves. Gone were Goombas and Koopa Troopas. In their place were Shyguys wearing a mask (what’s underneath the creepy mask?), Pidgits riding magic carpets, and gigantic moving cacti called Pokeys.

But the most significant change came on the first screen after pressing Start. You weren’t limited to only playing Mario (or a palette-swapped version of him as Luigi, if you were player 2) anymore. You could play as one of four characters, each of whom had varying strengths and weaknesses. 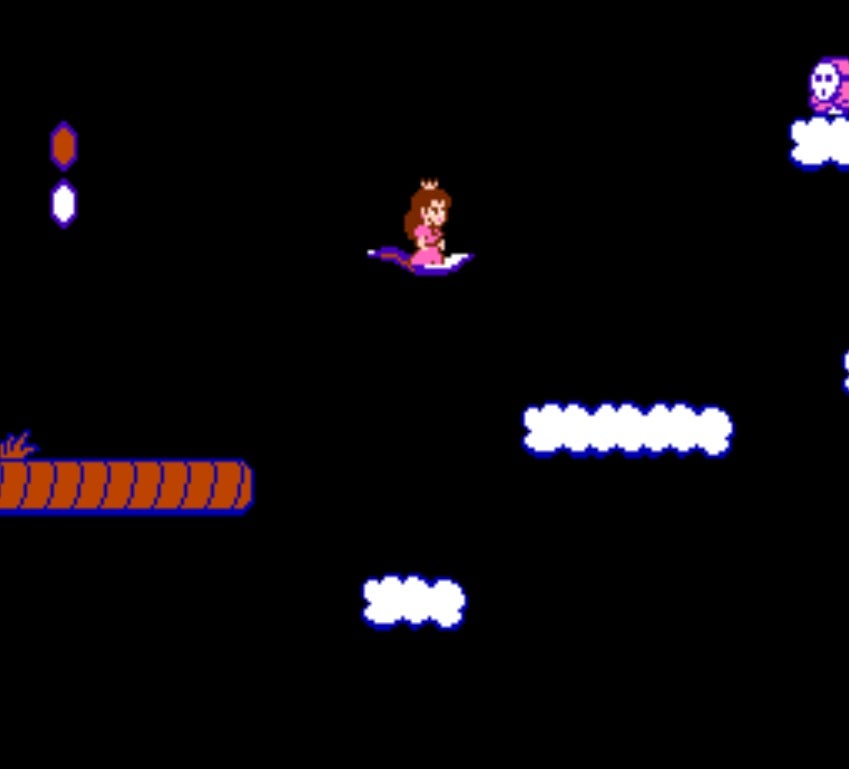 My favourite character, by far, was Princess Peach. I know Toad is the fastest (making for an ideal speedrunning character) and Luigi has the best jump, but Peach could briefly hover in the air, and using that flying technique was my favourite part of the game.

Some context is important here. Most platforming games of that time were brutally unforgiving with their jumping puzzles. You need only look at the first Mario to see what I mean. If you want to be even more masochistic, play the original version of Super Mario Bros. 2, known as The Lost Levels in the States.

Princess Peach’s flying ability brought a finesse to platforming, making obstacles more forgiving. Miss one of those Trouters jumping from a bottomless waterfall? Have Peach glide until the next Trouter jumps out of the water. 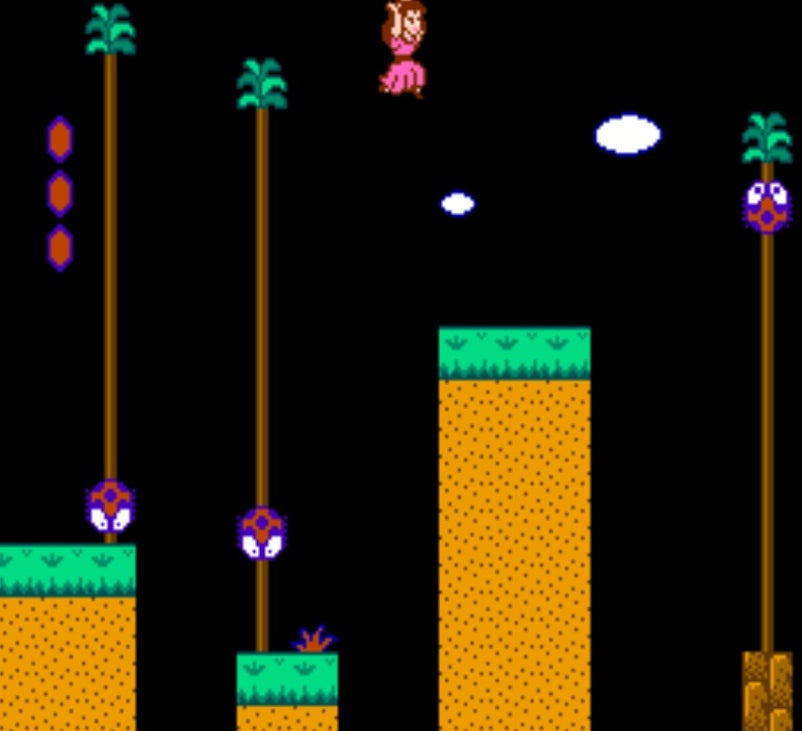 Peach also allowed players to float over throngs of enemies, making their journeys through Subcon more enjoyable ones. Bob-Ombs, which were first introduced in this game, make World 5-3 difficult. Selecting Princess Peach, you can fly over most of them.

Peach’s floating ability was the first of Nintendo’s many different solutions to the problem of letting players more finely-tune their jumps. It was the direct predecessor of Mario 3’s raccoon tail, Mario 4’s cape (here I refer to these power-ups’ ability to slow your descent, not to take flight), FLUDD in Mario Sunshine, and even the Glydon form in Odyssey. 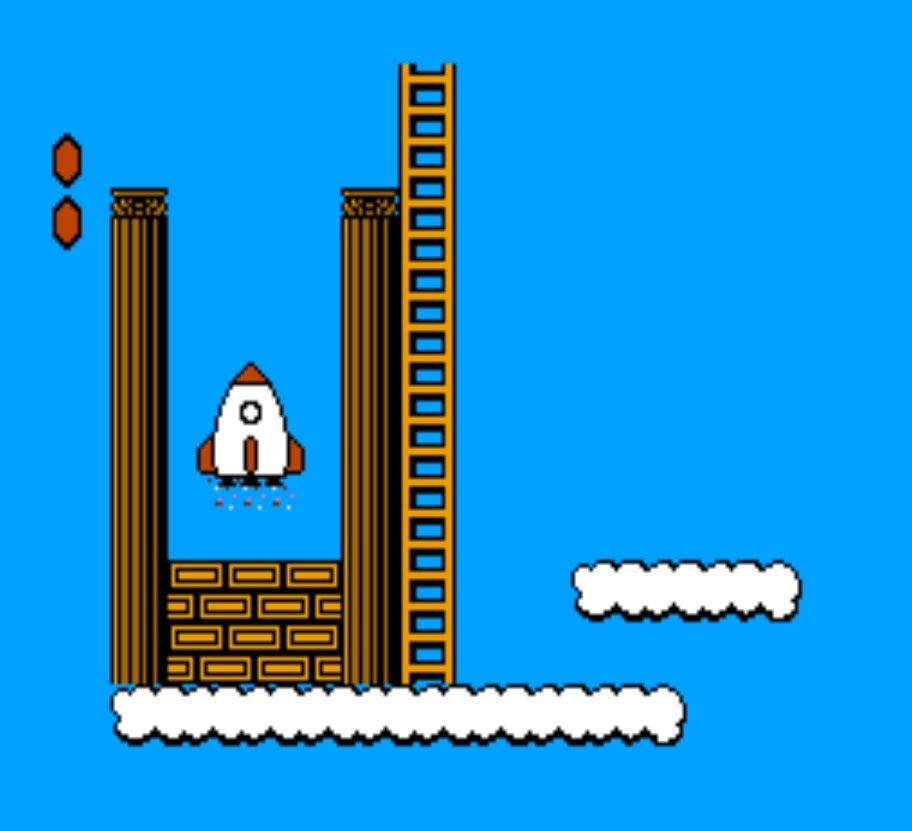 This sense of whimsy is spread throughout the game. Rockets take you to new areas, the Starman makes players invincible, and POW boxes are a throwback to the original arcade version of Mario Bros.

Sub-space is a shadowy alternate dimension where everything is flipped. But the music, hearkening back to the original Mario, implies that sub-space is the reality, especially since the familiar mushroom only appears here to give an energy boost. Which is real? 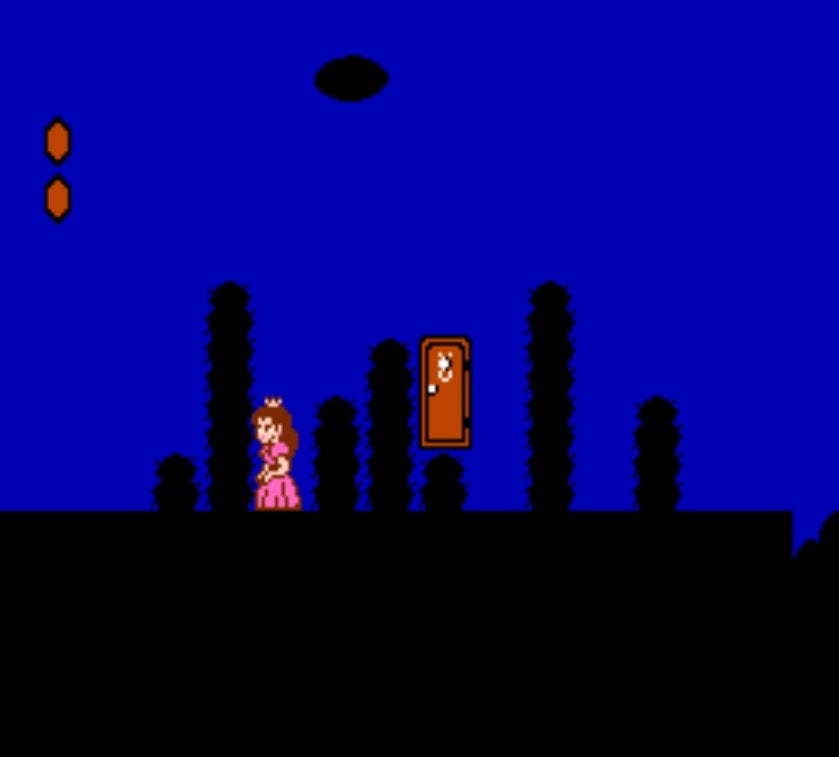 Memory has clouded my view of Super Mario Bros. 2. I’d remembered it as the easiest of the three NES Mario games. But I died a bunch of times when I began my replay, and that was mostly because I tried to play it the same way I had the original Mario, which was to race my way through a bunch of platforms.

I couldn’t help but notice how many times SMB2 slowed me down, whether it had me digging through a pit of sand, tracking down a key, or bombing my way through walls. SMB2 made me pause and soak in the world. What to do next?

Players could move left on the screen as well as right, and there were vertical stages as well. The first level began with a plunge from the sky, showcasing the game’s verticality. I loved riding Pidgit’s magic carpet over a big chasm. There were a variety of new solutions to old problems. 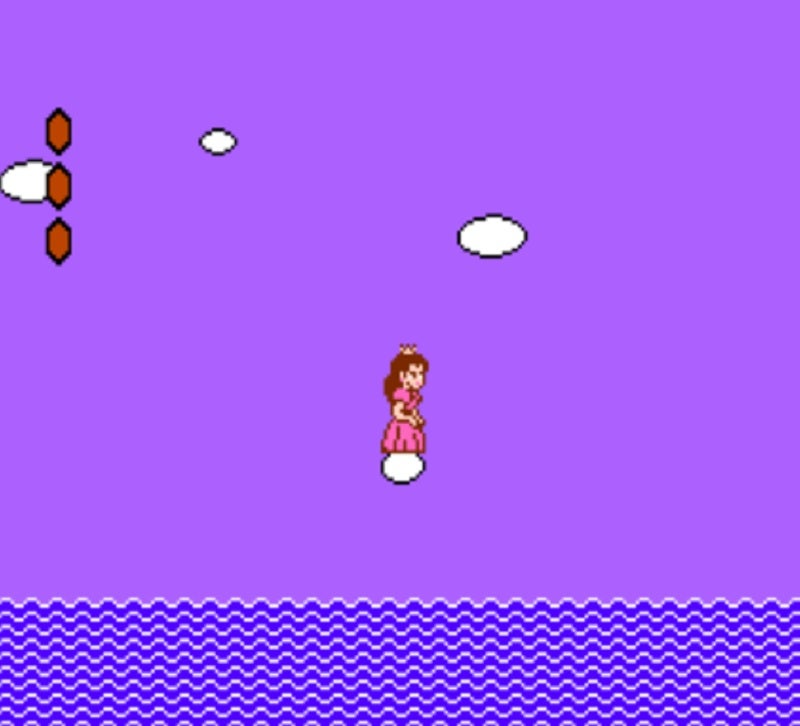 There was one section that stumped me as a kid. In World 4-3, you come out of a small cave and see a Birdo. Go left, and there’s a dead end. Go right, and there’s an uncrossable pit. I didn’t know what to do, so I beat Birdo, wondering if that was the key. Nothing happened.

I went back inside the entry point, but there wasn’t anything to do down there either. Then it hit me. Could I ride one of Birdo’s eggs across the pit? I tried jumping on, and rode her egg all the way across until I came across a new island. I can’t tell you how excited I was to figure that one out on my own.

The variety of worlds in SMB2 was welcome after the general similarity of the first game’s Mushroom Kingdom. You wander a desert, slip across an icy world, and even climb up into the sky for the final confrontation against Wart. 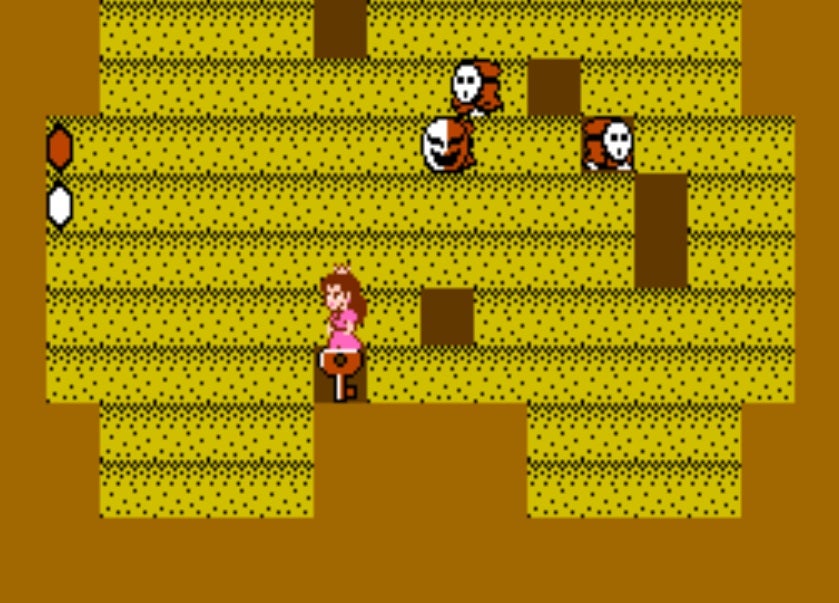 In an earlier article, Ethan Gach pointed out how deadly the Phantos were. I hated the Phantos and, similar to what Ethan described, still have a subconscious sense of fear at their presence. Long before the ghosts of Silent Hill 4 and Mr. X from Resident Evil 2 were chasing me, Phanto freaked me out.

A big reason for that was they could chase you everywhere, including into sub-space. Its pursuit felt relentless, even though you could always technically just drop the key. The moment you picked it back up, the Phanto was back after you. Its creepy expression and the way it pursued your character was one of my first bouts with survival horror.

In contrast, the actual boss monsters struck little terror. They aren’t difficult, whether they’re a rock-throwing crab or a bomb-chucking mouse. The most surprising boss fight by far is in the final stage, when one of the bird-faced Mask Gates, which to that point were benign markers of the end of each level, comes to life and attacks you. Super Mario Bros. 2 likes to make you feel safe before pulling the carpet out from underneath you. I do wish there would have been a little more variety with the sub-bosses, most of which are Birdos in different colour variants. 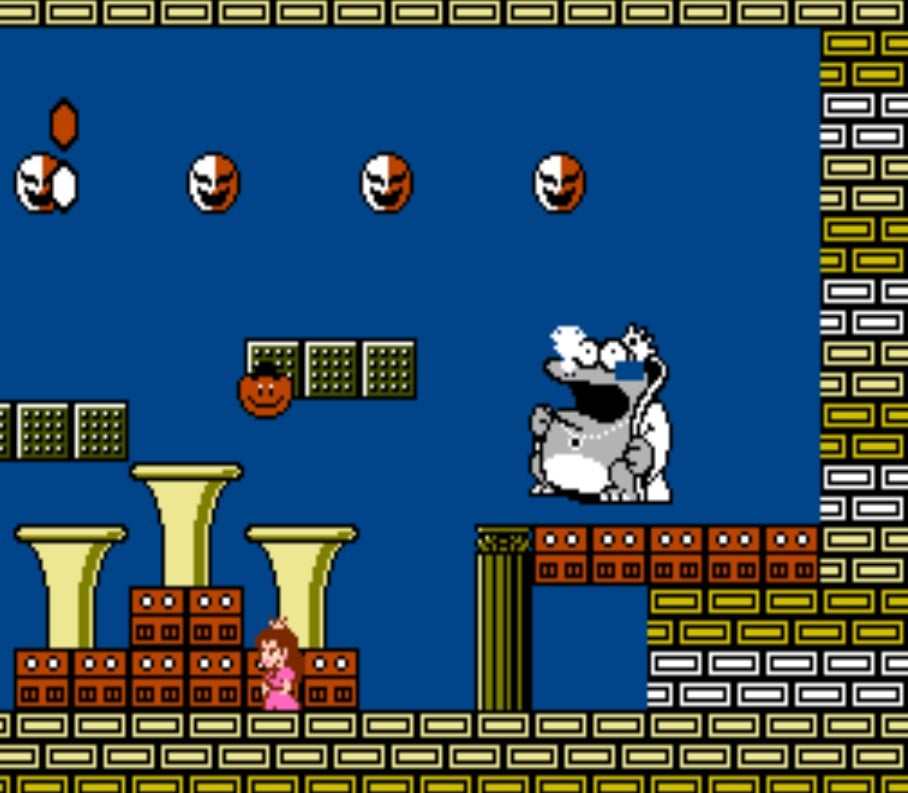 The battle against Wart is straightforward. Throw a bunch of vegetables into his mouth until he gets knocked out of his castle. But the ending that awaited was surprising. Before Jacob’s Ladder, Fight Club, and Identity tricked me, Mario 2 had the ultimate twist ending. The whole adventure was just Mario’s dream. So if Wart was a dream and therefore represented the subconscious of Mario, did Mario secretly hate vegetables? He’s also the least powerful character in his own dream. He’s not the fastest, doesn’t jump the highest, and certainly can’t float. Did he suffer feelings of inadequacy that only mushrooms could overcome?

The spirit of experimentation in all of these NES sequels was what made the games so special. This was back when classic games like Zelda, Castlevania, and Mario still hadn’t established a formula yet, so it didn’t feel strange when a new version came out and upended the whole design.

I actually appreciated how different they were and in many ways, I loved the sequels more than the originals. I know people can debate whether this was the real Mario 2 or not, but for me, it definitely is, especially considering that the original Mario team members worked on it. 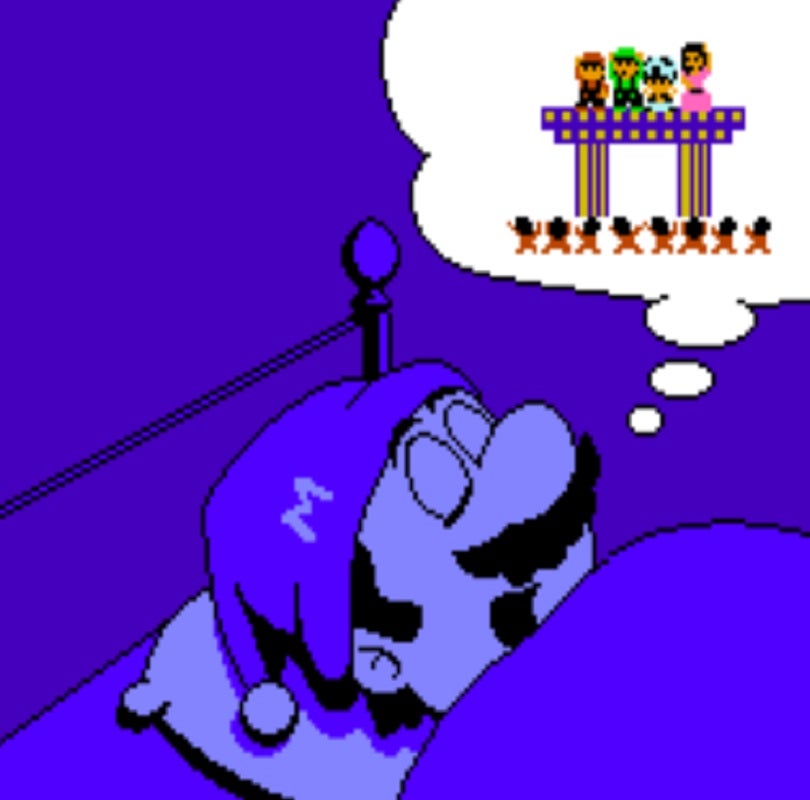 Nintendo generally excels the most when given freedom to play, whether in the dreamspace of Link’s Awakening, or the wonderful landscape of Subcon in Super Mario Bros. 2. SMB2 expanded the scope of the series, and it’s easy to see how the different gameplay styles of the four SMB2 characters evolved into the varying costumes of Super Mario Bros. 3, and eventually into the brilliant gameplay kaleidoscope of Odyssey.

Like Mario and Link, sometimes I also have strange dreams. The other day, I dreamed we lived in a world without video games. Time to get some vegetables and make that nightmare go away.