Rocko’s Modern Life: Static Cling Is About Letting The Past Go And Embracing The Future

Image: Netflix
To sign up for our daily newsletter covering the latest news, features and reviews, head HERE. For a running feed of all our stories, follow us on Twitter HERE. Or you can bookmark the Kotaku Australia homepage to visit whenever you need a news fix.

When Rocko’s Modern Life: Static Cling was first announced back in 2016, it initially seemed as if it might premiere on Nickelodeon as an hour-long television special — a metaphorical coming home for fans of the original series with nostalgic memories of tuning into the network where they first met Rocko 25 years ago. Watching it now, though, you get the distinct sense that Static Cling might have always been destined for Netflix.

Because Rocko’s Modern Life was always a show aimed at both younger and older audiences, with two distinctly different tones of humour that were designed to hit its viewers differently depending on their level of maturity, Static Cling brings you back into that world with some interesting ideas in mind.

The series’ trademark bawdy humour with suggestive sight gags and wordplay are front and centre, and tickle that part of your brain that still giggles at words like “wiener” and “taco.” But there’s also a keen awareness about how removed most people have been from Rocko’s Modern Life since it went off the air in 1996, and what it means to exist in the age of long-awaited reboots driven by enthusiastic, dedicated fans.

At first, it seems as Static Cling has no qualms about pandering directly to viewers as Rocko (Carlos Alazraqui), Heifer (Tom Kenny) and Filburt (Mr. Lawrence) offhandedly joke about how they’ve been missing from Earth for over two decades and how overjoyed they are to get back to living their lives in O-Town. But as the special kicks into gear with a story about Rocko clinging to the past because he feels out of place in the modern world, Static Cling reveals itself to be something a bit more thoughtful.

After literally crash-landing into the 21st century, Rocko and the gang waste no time in trying to catch up with all the things they’ve missed out on, like the advent of cell phones and the popularity of radioactive energy drinks that cause you to spontaneously mutate.

Things are just familiar enough that the friends don’t exactly have a difficult time understanding where they are in a physical sense, but the change in the cultural landscape hits Rocko particularly hard after he realises that the comic book shop where he used to work is no more.

For whatever reason, none of the “new” present’s technological wonders manage to grab Rocko, who sincerely wants to be excited about being back. But he can’t. Despite the fact that everyone else in O-Town has long since left the ‘90s behind, Rocko tries to hold onto whatever little pieces of them he can, in the hopes that he can feel the old comforts he’s gone so long without.

Rocko ends up deciding that the world can change as much as it wants so long as his beloved show the Fatheads is rebooted. But when the show’s creator Rachel (Joe Murray) disappears, the wallaby sets off on a journey to find her and plead with her to make his dream come true. 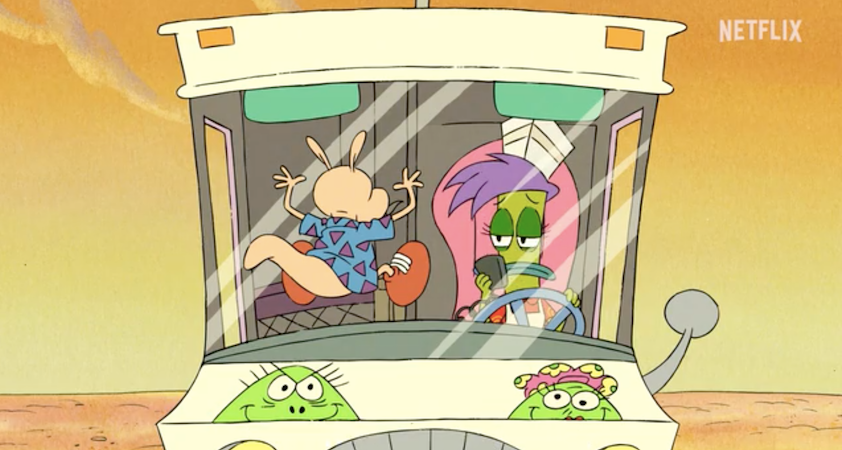 Rocko pleading with Rachel to come back to O-Town. (Image: Netflix)

Rachel’s gender identity isn’t the focal point of Static Cling’s plot, but it’s an important element of the story all the same because it both doesn’t shy away from or make the biggest deal about her being transgender. Though the character was originally introduced as male, Rachel decides to transition part-way through the special as part of her own personal arc of growth and discovery as she ventures far from her home.

When she comes out to Rocko, there’s a brief moment as he and his companions process what Rachel’s just told them, and they quickly keep things rolling because what they’re most concerned about is whether she’ll help them save The Fatheads.

Through Rachel, Static Cling best makes its point about how a person can have fond, nostalgic memories for the things they once loved and even the people they used to be, but also be more than comfortable with the idea of moving into the future and letting some of the past go. Where Rocko’s often panicked about The Fatheads’ fate, and by extension, his sense of security, Rachel is calm and collected and repeated urges her pal to chill the hell out.

Rocko’s concerns about Conglomo’s take on a Fatheads reboot being a pale comparison to what the show would be are understandable, and is another of Static Cling’s unsubtle messages to the audience about how the show’s creative team would love a proper return to the small screen. But Rocko’s Modern Life: Static Cling does work as its own self-contained, if relatively smaller, narrative, and it ends on a note that’s honest and sentimental.