There are so many great, memorable levels in the Zelda series, from Majora Mask’s Stone Tower Temple to the Arbiter’s Grounds in Twilight Princess. But a level that’s always stayed with me from the series is the Palace of Winds from the Minish Cap.

Developed by Capcom and Flagship, The Legend of Zelda: Minish Cap was released in 2004 for the Game Boy Advance. I feel it’s an overlooked entry in the series that doesn’t get as much love as some of Link’s other portable outings, like the Oracle games. While size transformation of the Honey, I Shrunk The Kids variety was the main new gimmick introduced in Minish Cap, the Palace of Winds was about climbing high up into the heavens and braving the heights. It fused Mario-style platforming with the distinct puzzling of Zelda. In fact, there are several nods to the Mario series in the palace that make it all the more memorable. 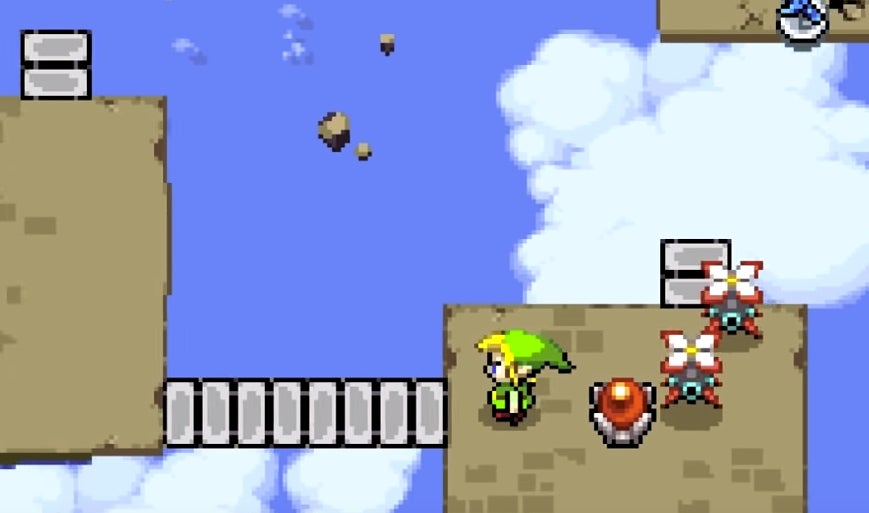 Creating a sense of verticality and height is difficult in an overhead perspective. But the Palace of Winds is structured almost like a series of islands floating in the sky. Clouds, actual islands, and the ocean lie far below. When you first enter the palace, the only way to get across is through a series of bridges that are activated via crystal switches.

You have to fight off groups of Peahats and use a combination of arrows, boomerangs, and bombs to trigger the crystal switches in the right places. The process feels cumbersome, especially as some of the switches are hard to reach. But this is intentional since it’s a setup for the dungeon’s key item.

The Roc’s Feather, first introduced in Link’s Awakening, is one of my favourite items in the overhead Zelda games, as it allows Link to jump. The treasure you gain in the Palace of Winds is the Roc’s Cape, which not only allows you to jump, but glide across big chasms as well.

Usually in Zelda dungeons, the treasure comes about halfway through it. In the palace, you earn it fairly early on after defeating a swarm of fire-hurtling Wizzrobes, indicating that it’ll be an important component of your playthrough. Donning the cape means that you no longer have to rely on activating bridges to cross pits. 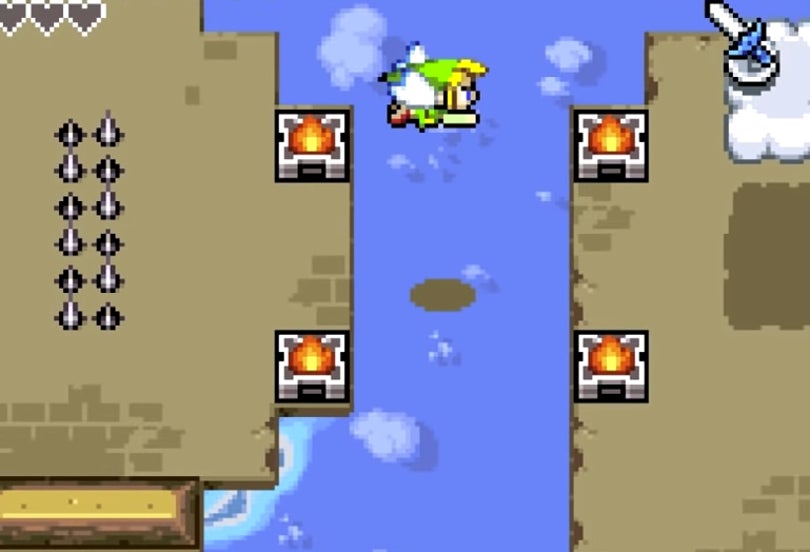 Through the freedom of flying, I came to understand the original builders of the Palace of Winds—the Wind Tribe. The Wind Tribe lives in the clouds and can magically control the wind.

Their ability to harness and manipulate wind is felt nowhere as clearly as with the Roc’s Cape, which allows Link to jump up into the clouds and soar. I could imagine tribe members leaping from one location to another. And the palace is huge, easily one of the longest dungeons in Minish Cap.

The palace is swarming with enemies and grates that flip over, which tug on the nostalgia strings since they’re so similar to the ones from Super Mario World. Even one of the original Mario enemies, Lakitu, makes an appearance here, riding on clouds and attacking with lightning bolts. Keeping with the motif of the Mario games, there are also moving platforms that Link has to traverse to make his way through the palace. 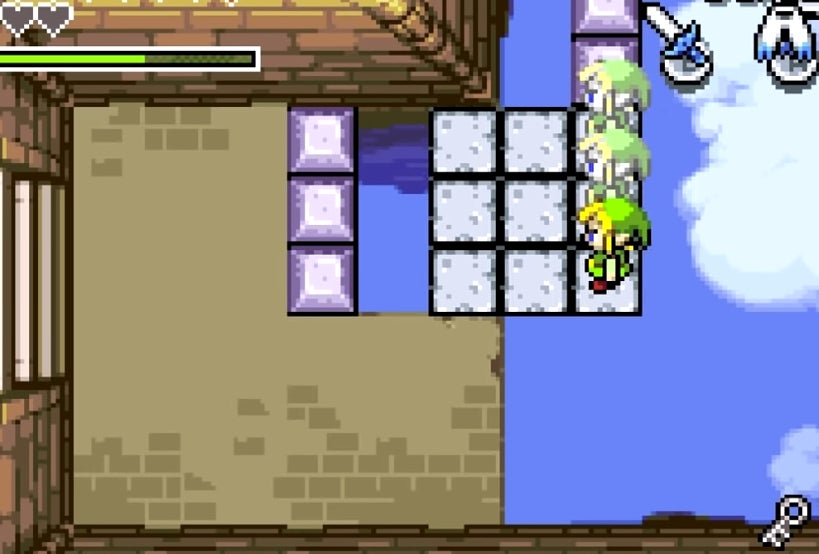 Some of the trickiest parts of the palace involve activating three copies of Link, then getting on a moving platform, avoiding obstacles, and reaching another part of the palace to perform a task that only the three of them can do, like moving a huge block.

Since the copies of Link evaporate once the green magic gauge runs out, the time constraints, coupled with the massive drops, heighten the intensity.

With breakable floors forcing you to keep on your toes, and potential drops around every corner, the palace constantly reminds you that you’re high up in the sky. Even though falling off the edge only does minimal damage, I still felt pressure not to fall.

Gone With The Wind 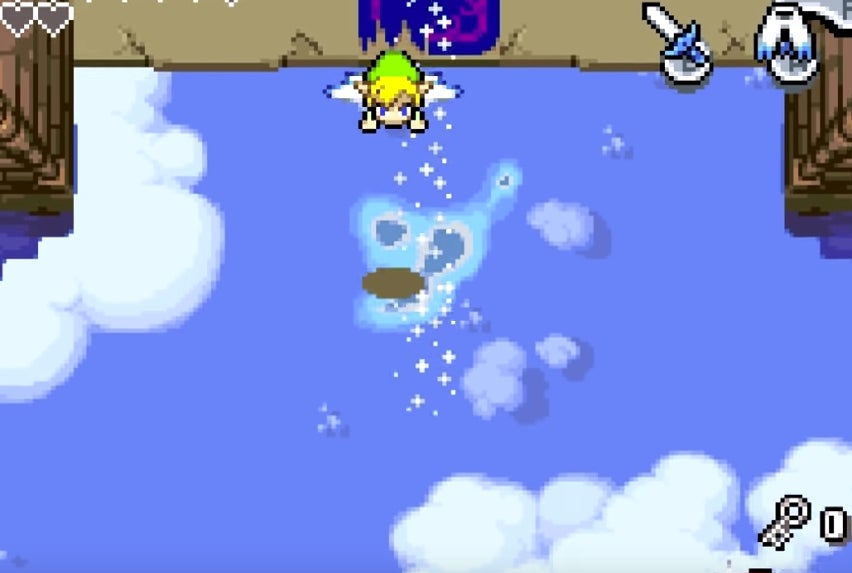 The developers do a wonderful job setting puzzles up, and then allowing you to harness the pieces to solve seemingly impassable routes. For example, you first come across a series of fans that let out streams of strong wind that push you over the side. Waiting for the right time to jump, or hide in a hole, is key to crossing these sections.

But shortly after that, you are confronted with a massive pit that’s too wide to jump over, even gliding with the Roc’s Cape. In this case, you have to use the fans, not avoid them, waiting for them to shoot out long gusts of wind, then use that wind to cross the massive chasm. Levitating torches guide Link’s way, showing where he should aim his flight.

The Big Key, which opens the pathway to a Zelda dungeon’s boss, usually represents the climax of a dungeon. Here, it’s barely the midpoint. You open up what you think is the path to the final boss, only to find yourself standing over a gigantic pit. A dive lands you on an island and a mid-boss battle. 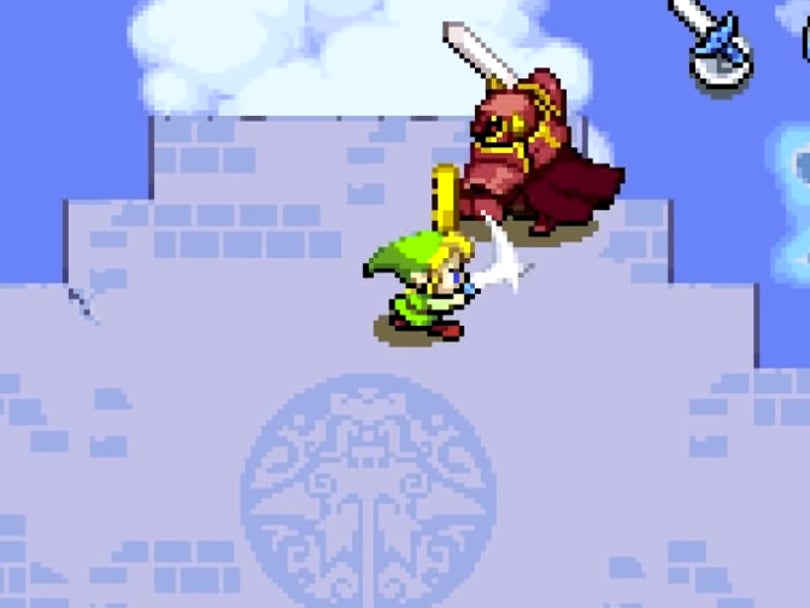 There are subtle references Minish Cap makes to previous games in the series, and my favourite is the mid-boss battle music, which is a remake of the Zelda II’s original boss battle music on the Famicom (it was replaced with a different tune outside Japan). The mid-boss fight against the giant Red Darknut can either be a very easy battle, or a difficult one.

Putting aside the question of how he got onto that tiny, isolated island in the first place, the key to a quick victory is to knock him off the side of the platform, using the environment to your advantage. This also reminds you of how precarious your situation is high up in the palace and how fortunate you are to have the cape.

After the Darknut’s defeat, you keep on climbing. Tornadoes are interspersed throughout the back half of the dungeon, tossing Link up into the air and forcing him to glide to either another platform or tornado. Link continues to jump up through the clouds, warding off Wizzrobes, Gibdos, and Moblins.

Going into mini-mode isn’t an important part of the palace, which makes sense since it’s all about the wind and flying across the air. But I do feel it was a missed opportunity, as soaring across gaps that would be tiny for big Link could have led to some interesting puzzles. 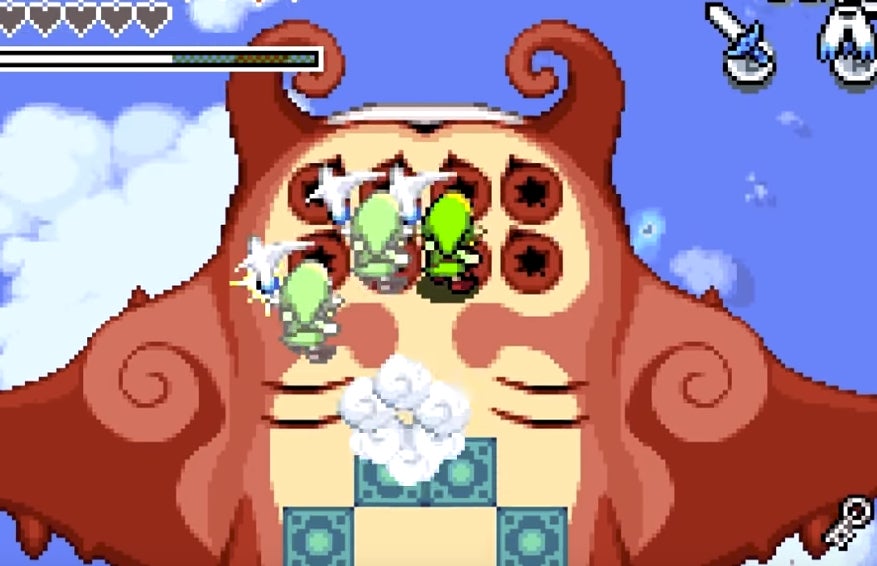 The boss of the palace is a Gyorg Pair. They’re like giant flying manta rays which you have to ride atop. This final fight forces you to combine all of the gameplay techniques you’ve utilised in the palace. You clone yourself, then attack the multiple eyes in a flurry of sword swings. But the male Gyorg swoops in for a strike, damaging Link and also causing the clones to dissipate. Link is forced to leap from the big Gyorg to the smaller male, weaken him, then return.

It’s a frenetic battle across the sky, and the music complements the pace well. The female Gyorg even releases her children, which you have to kill. Multiple jumps from one Gyorg to the other follow, as do more cloned attacks and swift dodges. Eventually, Link triumphs.

Honestly, it’s a sad sequence when you actually think about it. This Gyorg family is chilling in the skies when Link comes to attack and essentially massacre the entire family. Is his need for the wind element so important that the Gyorgs had to be killed to gain it?

Without it, Link can’t gain the sacred blade and defeat Vaati. The cost the Elemental Sanctuary demands is bloody and dark, despite the colourfully vibrant aesthetic. Link eventually becomes master of the four swords and the elements, and can finally defeat Vaati. But the cycle perpetuated by this plunge will haunt Link and all future Links to come.

I loved the way the palace used verticality to incorporate a different type of experience into the Zelda franchise. While some of it openly borrows from Mario, the quirky charm and challenges Minish Cap employs makes the Palace of Winds one of the best levels in the series.

In general, it feels like the portable outings for Zelda encourage more experimentation and quirkiness, whether it’s the dream world of Link’s Awakening or the seasonal and temporal manipulation of the Oracle games. This is very much welcome in a series that, until recently with Breath of the Wild, could be rather formulaic. My only wish for Minish Cap was that it was longer. But sometimes the best things come in minish sizes.