Our original review called the Neo Geo Mini arcade-style retro console “cute, but an imperfect nostalgia trip.” The Samurai Shodown limited edition, released this week to celebrate the latest entry in the long-running fighting game series, is exactly that, but it comes with more stuff and looks so much nicer.

I firmly believe that translucent plastic makes everything better. Game consoles. Action figures. Toilets. Maybe not toilets. But just about everything else becomes a work of art when opaque plastic is replaced with something more revealing. That’s certainly the case with the three different Samurai Shodown Limited Edition Neo Geo Mini consoles.

Available in see-through red, white, or blue, the $US140 ($207) bundles not only look gorgeous — they include everything two players need to play 40 classic Neo Geo games right in the box.

Editor’s Note: While Amazon ships these consoles to Australia via their U.S. webstore, expect to pay a premium for international shipping.

It’s a bit more expensive than the original Neo Geo Mini, which is available for $149, but it comes bundled with a pair of clear controllers and an HDMI cable, items sold separately from the original.

Each of the three colours represents a different Samurai Shodown character. Blue is Ukyo Tachibana. Red is falcon tamer Nakoruru. White, the version I have, features Haohmaru, my personal favourite.

Along with a non-slide pad for the bottom of the unit and a sticker to cover the control area, each version comes with a sticker for the top panel of the cabinet featuring its corresponding character, as well as a special collectible character card. I was hesitant to apply the stickers, not wanting to obscure the translucent goodness, but they look pretty good. 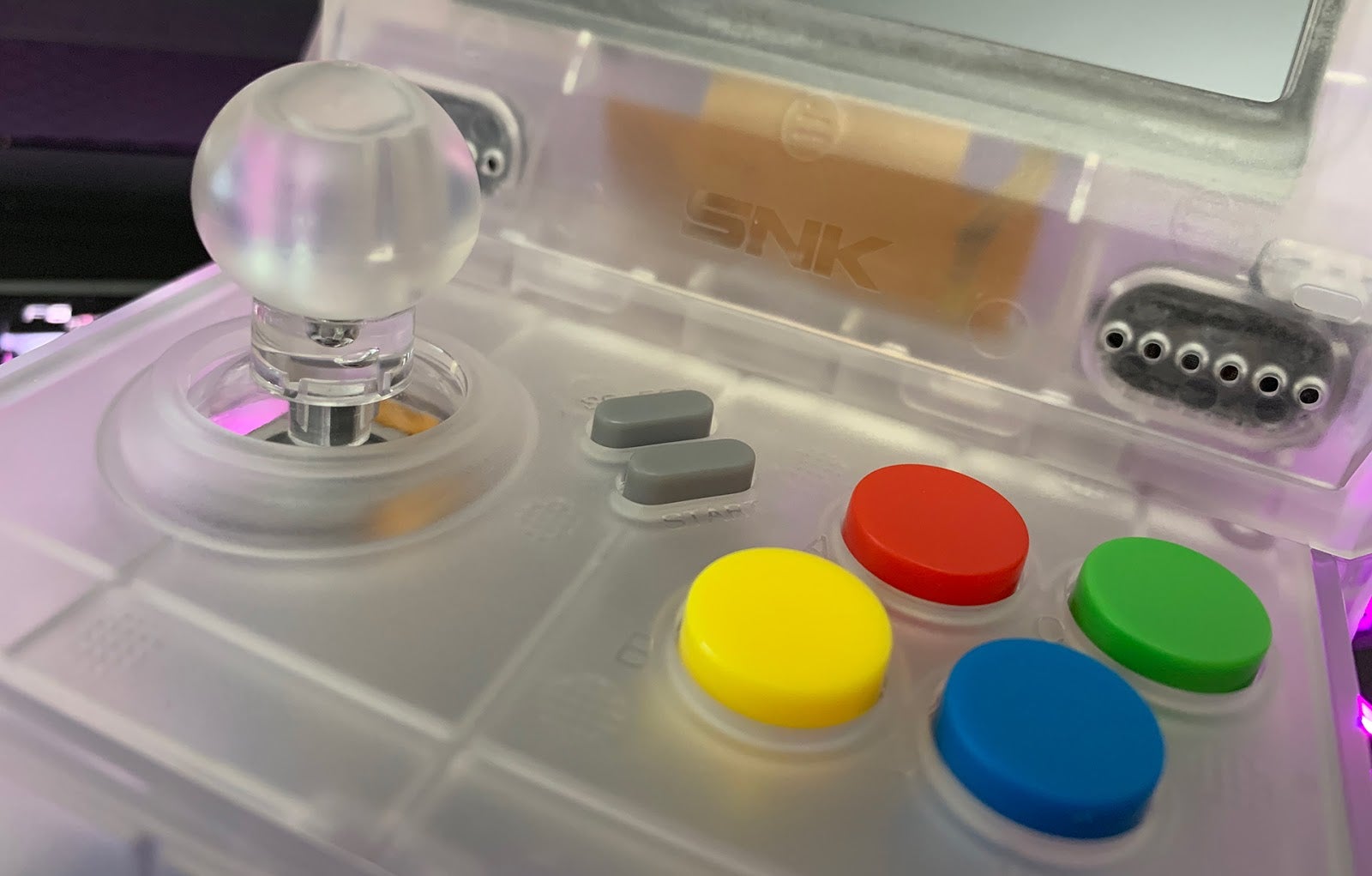 The Samurai Shodown Limited Edition Neo Geo Mini isn’t just about fancy see-through plastic and stickers. The game lineup is tweaked slightly from the original release to focus on samurai and the shodowns they have. All six Samurai Shodown games for the Neo Geo are present, including the first, third, and fifth games, which aren’t available on any other edition of the hardware.

As Chris Kohler did in his review of the original Neo Geo Mini, I’ll break down the remaining games into two categories. First we have the fighting games.

And then there’s everything else.

It’s a different lineup from any other version of the system. For example, it’s got fewer King of Fighters games than the international version, and it includes Aggressors of Dark Combat, which was only on the Japanese version before.

My experience with the system closely mirrors that of Chris Kohler’s with the original Neo Geo Mini. The standalone experience is much more playable than I expected.

The tiny joystick and buttons are surprisingly responsive. It’s a bit blurry connected to a television. I was hoping for crisp, sharp pixels and was disappointed. There are better ways to play these old games out there, but those ways don’t look nearly as pretty on my desk. 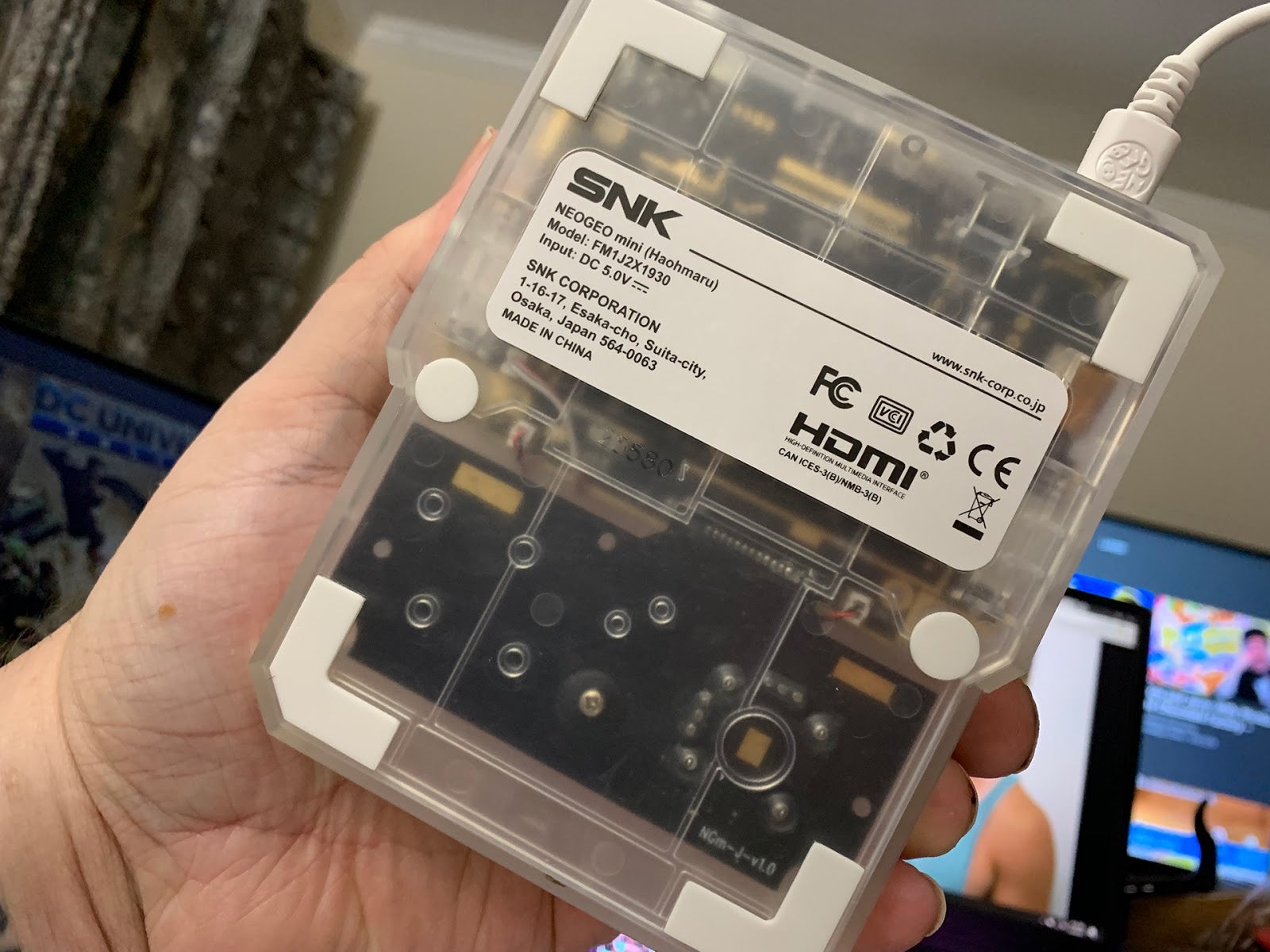 My favourite thing about the Samurai Shodown Limited Edition Neo Geo Mini is my favourite thing about most translucent plastic products. I love seeing the insides of the stuff I am playing with. I enjoy getting a peek at the tiny board that’s emulating hardware that took up a lot more room back in the day. It’s a beautiful thing.