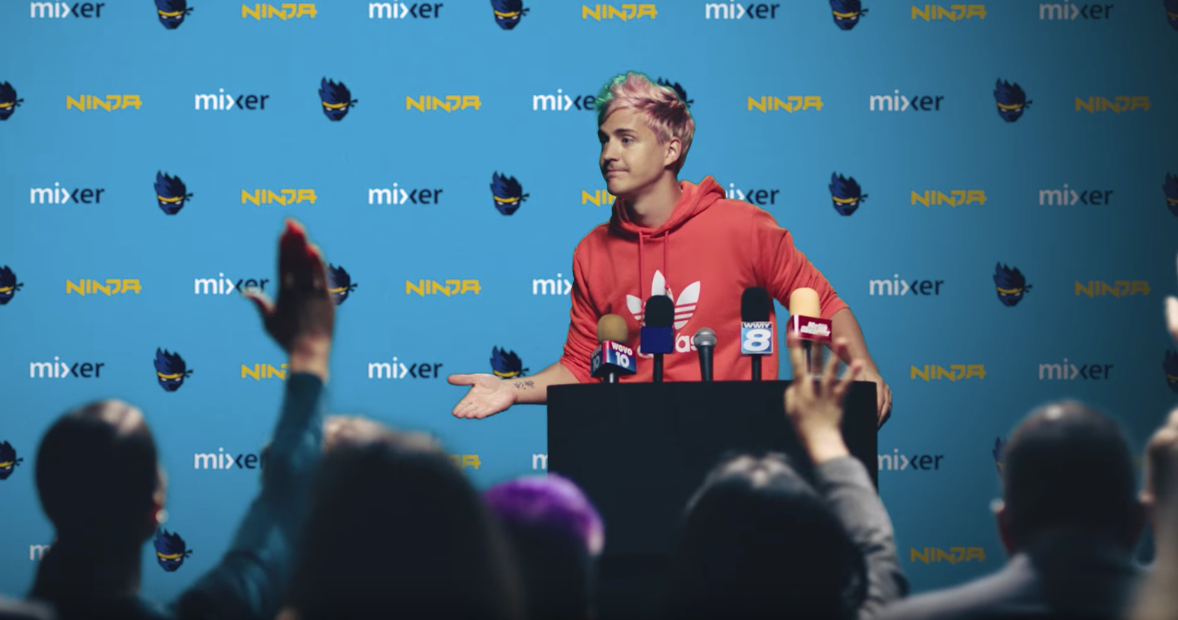 Screenshot: <a href="https://www.youtube.com/watch?v=LK06xdtxCbY">YouTube</a>
To sign up for our daily newsletter covering the latest news, features and reviews, head HERE. For a running feed of all our stories, follow us on Twitter HERE. Or you can bookmark the Kotaku Australia homepage to visit whenever you need a news fix.

Superstar streamer Ninja is leaving Twitch for Mixer. This morning, he’s been serving up his first Mixer stream, broadcasting in front of a live crowd at Lollapalooza and also garnering tens of thousands of online viewers.

The move to Mixer was announced yesterday in a short ad full of lighthearted jokes aimed at the hype surrounding this niche platform announcement. One joke in the ad — an archaic gag about a character in drag’s wig falling off — baffled and unsettled me.

The ad depicts a press conference held by Ninja, who stands at a podium. He announces that in the future he will be streaming exclusively on Microsoft’s streaming platform Mixer. He fields questions from eager audience members, several of whom are in costumes. One audience member is the bush from Fortnite; another is a cooler of Red Bull wearing a hat.

Other audience members are played by Ninja himself, but in various disguises. There’s Ninja as an old man, and Ninja in glasses and a suit. There’s also Ninja in a wig and dress, sporting heavy lipstick and moustache stubble.

Near the end of the ad, the Ninja at the podium calls for a tech named Steve — who is also played by Ninja in a different costume — to press a button labelled “big announcement”. Instead, Steve stares blankly, twirling a banana.

During the wait, the camera cuts back to show the dress-clad Ninja tossing their head back, knocking off their wig. The audience gasps in shock, and the character lets loose some appalled falsetto shouts.

Drag queens and trans women’s wigs falling off is an old comedy gag, although it’s one that has fallen out of fashion as society’s view of trans people has become more accepting. The construction of jokes such as this, particularly the reactions of shock by other people, plays into tropes about trans people deceiving others or being fake.

It furthers the narrative that trans people are “really” the gender they were assigned at birth and that their current presentation is a costume or disguise. The punchline of “it’s really a man!” and responding to that with gasps normalises panic as an acceptable response to finding out someone is trans, a response that can get real trans people killed.

It’s hard to tell what the wig joke is trying to do in this ad. The audience members being disguised as question-asking Ninjas might be a play at the streamer’s popularity and a way to poke some self-reflective fun at what is a very insider-y announcement.

But a punchline revealing the most eager questioners to actually be Ninja could have been made using any character in the audience. The suit-wearing man’s glasses could have fallen off, or the old man’s bald cap. Ninja could have morphed into Steve and pressed the button himself.

But Ninja in a dress and stubble is framed here as being the flimsiest disguise, as well as the one that we’re culturally most used to spotting. We’ve seen the wig-falling-off joke before, so it reads as joke, and the gender reveal element — not just “that’s really Ninja”, but “that’s really a man” — gives it an extra punch.

Ultimately, it’s a joke that has nothing to do with Ninja, games or streaming.

By making trans people a punchline, the ad’s creators are reminding trans people such as me that we aren’t the audience for this announcement. We’re apparently not in the demographic of people targeted by the ad, which is supposed to be anyone who watches Ninja, or Mixer, or Ninja on Mixer.

As I wrote back in October when PC marketplace GOG made an equally dull transphobic joke, “every time this happens, it feels like one more reminder that at least one person who works at a company that makes things I like thinks my existence is funny, and that enough people there either agree or don’t disagree strongly enough to stop them”.

I’ve had trouble getting the Mixer ad out of my head since I saw it yesterday. I think it’s because I just spent last weekend covering the Fortnite World Cup, where Ninja featured prominently.

In my reflections on the event, I wondered whether Ninja and his adult streamer compatriots should be expected to be role models for young Fortnite players. Adults and kids play side by side in Fortnite, functioning in many ways like peers. In my weekend at the event, the huge age range of attendees and competitors seemed largely positive.

After watching the ad, I thought about all the kids I’d seen at the World Cup gazing at Ninja or calling his name from the stands. Statistically, some of those kids are trans. How many of them are actually watching a Mixer ad is up for debate, but the ad has over 1.4 million views on Ninja’s YouTube page, and it’s his pinned tweet.

Some little trans Ninja fan has certainly seen it, and I worry about how it might make them feel. If Ninja is their role model, this ad might tell them that it’s OK for people to make jokes at their expense. If they see Ninja as a peer, they’re learning not to expect their peers to treat them with respect.

By now, I’ve been out as trans for over two decades; I live a life surrounded by other trans people, where I can be out, generally, without risking my safety. Ninja being part of a tired joke with a transphobic history can’t really do anything to me, not in the same way that it might have when I was younger or earlier in my transition.

But it can potentially do a lot of harm to his young audience. A lot of young eyes are watching Ninja’s move from Twitch to Mixer, and it’s a shame this is the first thing they had to see.