During a Twitch stream earlier this week, popular leftist streamer Hasan Piker made a statement that would, by pretty much any measure, be considered incendiary. “America deserved 9/11, dude,” he said. “Fuck it, I’m saying it.” Today, Twitch suspended Piker for one week.

Emotions had been running high in the leadup to the statement on Piker’s stream. Piker, who is also a host of the online news show The Young Turks, was reacting to an episode of the Joe Rogan podcast in which the host interviewed recently-elected Republican congressman Dan Crenshaw. Near the start of the interview, Crenshaw, a former Navy SEAL who served in Afghanistan, had made the assertion that prior to 9/11, Bin Laden had no reason to hate America except our “Western ideology,” describing that hatred and the acts that followed as “irrational.”

Crenshaw went on to argue against the idea that the United States’ destabilising foreign policies had sowed the seeds of the 9/11 terrorist attacks. In response to Rogan’s comments that people in other countries now dislike the United States because they’ve watched civilians die en masse to U.S. drone strikes and other military ventures, Crenshaw suggested that “millions” of people in countries like Yemen and Iraq are actually “begging” for the U.S. to establish a bigger military presence and restore order. Ultimately, he concluded that if the U.S. was to pull out of many of the 100-plus countries it is currently occupying in various forms, worse actors would “100 per cent” fill the power vacuum.

Piker, an American citizen who was raised in Istanbul, Turkey, was vehemently opposed to these comments, and said so on his stream. “This is so insane,” he said after watching that portion of the interview. Piker followed this with his statement about how America “deserved” 9/11.

“We fucking totally brought it on ourselves, dude,” he then said. “We fucking did. Holy shit. Look at the way that this dipshit is running his fucking mouth, justifying genocide right now.”

Piker’s Twitch chat did not react well to this statement. Responding to the sentiment in the chat he brought up the fact that the U.S. sells weapons to Saudi Arabia, which had likely helped fund 9/11.

“How is anything I’m saying controversial?” he said. “We fucking fund the people who did 9/11—still, to this day. Donald Trump literally went on national television and said, ‘They bought $US10 ($15) billion worth of weapons,’ so if they chop-chop-chop an American legal permanent resident, it’s OK.” (It was actually $12 billion worth of weapons split between Saudi Arabia, United Arab Emirates, and Jordan.)

During the same (now-unavailable) stream, Piker used vulgar language to criticise Crenshaw for the hypocrisy of having once served, only to now use his credentials to justify more war. “Didn’t he go to war and, like, literally lose his eye because some Mujahideen, a brave fucking soldier, fucked his eyehole with their dick?” (Crenshaw actually lost his eye to an Improvised Explosive Device.)

These comments went well beyond the Twitch chat and set off an often-incendiary internet discussion, beginning with accusations that Piker is “anti-American” on Twitter and YouTube. Big personalities like Drama Alert host Daniel “Keemstar” Keem made hay of the fact that Piker hadn’t been banned from Twitch for the remarks.

Crenshaw himself also got involved, in response to a tweet Piker made about Crenshaw continuing to be offended by a joke comedian Pete Davidson made about his appearance on Saturday Night Live last year. “The only thing that offends me is your inability to use capital letters in any of your tweets,” Crenshaw said on Twitter. “But really it is the fact that Google/YouTube profit from and promote The Young Turks and by extension your disgusting defence of the 9/11 terrorist attacks against Americans.”

“If you have a problem supporting terrorists and those who fund terrorists, why did you vote against stopping our arms sales to Saudi Arabia four times?” Piker said in reply, citing Crenshaw’s record since he became a member of Congress in January.

This all culminated in Crenshaw making an appearance on Fox News yesterday to discuss Piker’s remarks. The segment opened with host Laura Ingraham declaring that the “radical left seems to be getting more depraved every day,” airing a severely truncated version of Piker’s clip with just the 9/11 line and no follow-up plus and the comments about Crenshaw’s appearance, and calling Piker a “vile creature.”

She then introduced “wounded war vet” Dan Crenshaw, who chuckled and proclaimed that Piker was obviously “triggered,” despite being the one who went on national news to talk about a mean thing someone on the internet said about him. Crenshaw and Ingraham proceeded to smirk their way through a conversation about how Piker doesn’t understand foreign policy, leftism is anti-American, and how it’s “pathetic” that Piker “sounds like a valley girl when he speaks, as a young man.”

The pair also talked about how it’s “incomprehensible” that the “highly radical” Young Turks have a platform on YouTube, and that conservatives would never be able to get away with being radical on YouTube. (Fox News currently has 3.4 million subscribers on YouTube.)

Around the same time, Piker went on The Young Turks to address his Twitch comments. He reiterated his central points—that American foreign policy led to 9/11, and the U.S. is selling weapons to Saudi Arabia – but conceded that he “should have used more precise and better” language to convey those ideas. Host Cenk Uygur, who agreed with many of Piker’s stances but vocally disapproved of how he conveyed them, asked Piker if his comments about Crenshaw’s eye were “satire.”

Piker replied in the affirmative. He said he doesn’t actually believe the Mujahideen are brave, and that he was instead referencing the end screen of the 1988 movie Rambo 3 as well as beliefs ostensibly held by former President Ronald Reagan, whose administration helped arm the groups that eventually became the Talbian and Al Qaeda. He went on to say that while he thinks Crenshaw took his comments “like a champ,” Crenshaw doesn’t necessarily deserve his respect.

“Service does not guarantee respect,” he said. “It should not. I’m sorry. This is the exact same kind of jingoistic sentiment that leads to the militant attitude that the United States has. If you have served and then, on top of that, are using that service to continue sending loads of young men and women overseas to die or to come back home and fail to reintegrate into society, just exclusively for the profits of the military industrial complex, then no, you don’t deserve respect by virtue of service.”

This, however, apparently did not move Twitch, which suspended Piker’s channel earlier today. Twitch does not publicise the rationale behind specific suspensions, so it’s impossible to say whether Piker got the big purple boot because of what he said about 9/11 or because his comments about Crenshaw constituted a personal attack. “If you disrespect a veteran as a Republican, you can be President, but if you do it as a leftist—especially one with a Muslim name—you’re a labelled a Jihadi who hates America,” Piker said on Twitter shortly after word of his suspension got out. Kotaku reached out to Piker for further information on the suspension, but he did not reply. Kotaku also reached out to Twitch and Crenshaw about the situation, neither of whom replied.

To an extent, Piker anticipated this potential outcome of his comments. He said during The Young Turks segment that he realised his on-stream comments would be misconstrued right after he made them, so he quickly stopped the stream and deleted the video-on-demand version of it. Because he’s one of the few popular vocal leftists on Twitch, he believes portions of his audience are waiting for him to slip up and defend the wrong cause so they can proliferate the clip sans context. That, he thinks, is what happened here, despite his efforts to pull the video.

As a leftist, Piker has had uncommon success on Twitch in part because he’s willing to go places other leftists sometimes aren’t—or have been unable to gain access to. At various points, he’s befriended popular right-leaning streamers. Other times, he’s debated them and dissected their talking points alongside other divisive political streamers like Steven “Destiny” Bonnell. Piker himself is a self-styled provocateur, going so far as to call himself “The Provocateur Gamer” on Twitch. This approach, for all its potential flaws, often pays dividends.

Based on numbers and the general lack of prominent leftist Twitch streamers, you could argue that due to the structure of Twitch and the modern internet at large, it’s currently hard for vocal leftists interested in actually discussing their views to succeed in a big way on Twitch without regularly going over the top. But at the same time, all of this provocation feeds the same insatiable content machine.

In Piker’s case, it began on Twitch, but quickly evolved into mob efforts on Twitter, where it’s notoriously easy for incensed users to descend on whomever they deem worthy of rage and threats. It then graduated to YouTube, where drama is especially big business and channels focused on ever-churning cycles of divisiveness are a news genre unto themselves. The YouTube commentariat frequently weighs in on Twitch issues as well, and Piker’s comments about Crenshaw—and specifically, the way he said them—made for perfect video fodder. From there, the controversy made the leap onto the mother of all outrage fabrication machines, Fox News.

This cycle benefits opportunists, whether they’re drama-devouring YouTubers or politicians like Crenshaw, whose mastery of the ancient art of concern trolling has been nakedly apparent ever since his spat with Pete Davidson. Yesterday, he ended his chat with Fox’s Laura Ingraham with a grin, saying that he needs to “come back more often” after Ingraham pointed out it was his first time on her show. 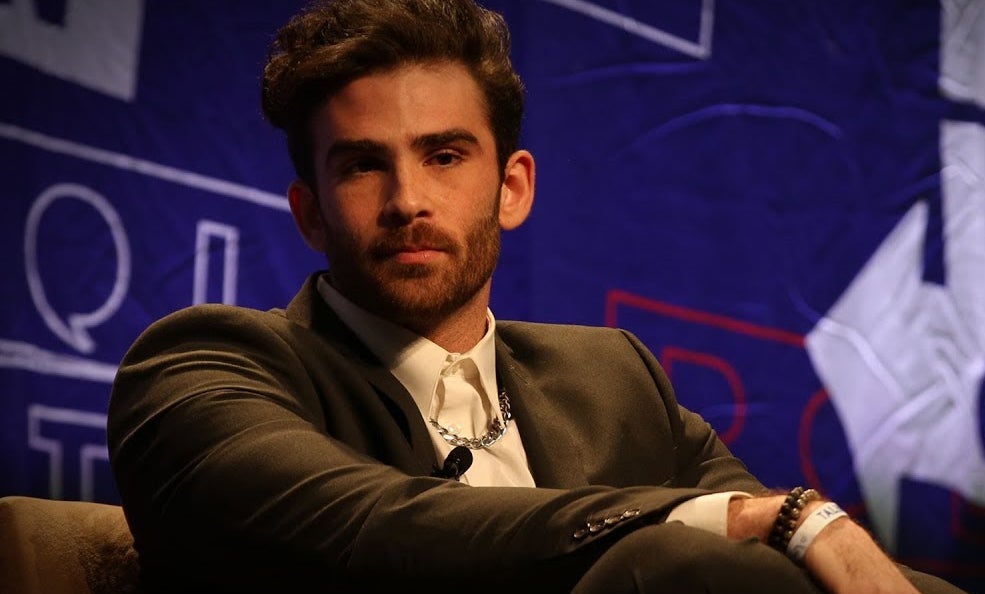 It also makes it hard to discuss the points Piker was trying to make, though he did, by his own admission, make them sloppily. What he tried to do was hold a powerful figure accountable by dispelling his justifications for undeniably abhorrent acts perpetrated by the United States. What ensued, though, was a drive-by scream fight about whether or not a streamer hates America. Twitch proceeded to pour salt on the wound by suspending Piker and, per its unpopular policy, not explaining why, leaving the door open for people to conclude that the content of Piker’s statement – that America’s policy decisions led to 9/11 – played a part in the company’s decision-making.

During his Young Turks segment, Piker expressed hope that people will still take away a more lasting lesson from all of this.

“Obviously, 9/11 was a horrific tragedy,” Piker said. “3,000 Americans died, OK? 7,000 troops have died since then in endless wars. And if you’re spending all of your energy getting upset at me because I think that is abhorrent and awful, maybe you should spend your energy elsewhere and realise that those who justify the endless bloodshed don’t actually have the best interest of those young men and women at heart.”