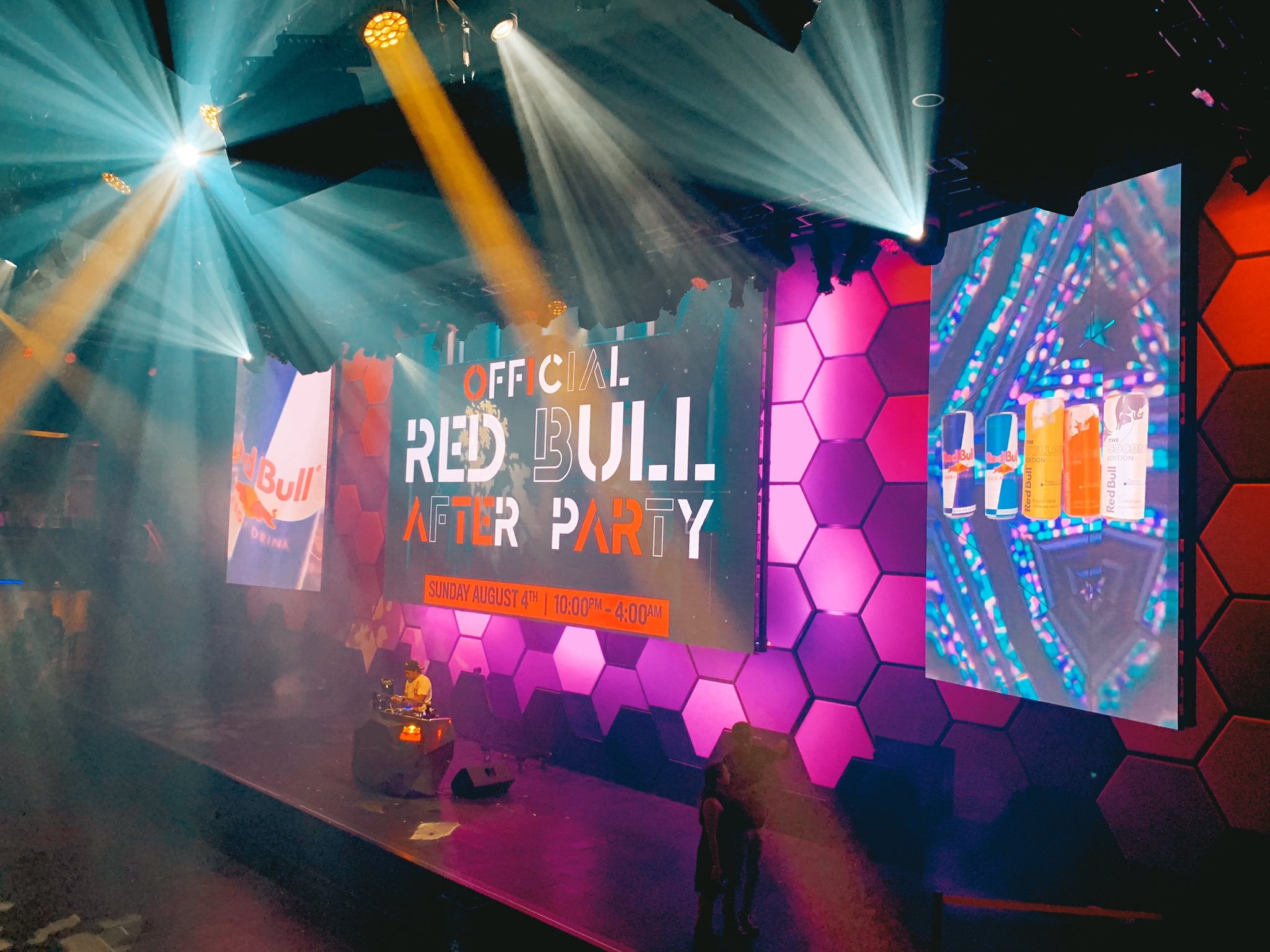 Photo: HyperX Esports Arena, <a href="https://twitter.com/HyperXESALV/status/1158251406203052032">Twitter</a>
To sign up for our daily newsletter covering the latest news, features and reviews, head HERE. For a running feed of all our stories, follow us on Twitter HERE. Or you can bookmark the Kotaku Australia homepage to visit whenever you need a news fix.

Last night, Red Bull hosted its annual official after-party for the Evolution Championship Series at the HyperX Esports Arena, a venue at the Luxor Hotel in Las Vegas. This morning, two women have come forward to describe having been sexually assaulted while attending this party. Also, a male attendee shared his belief that a drink intended for his female friend may have contained a date rape drug.

Although this event was described by Evo 2019’s Twitter account as the “official” after-party, the event had no cover charge and was open to anyone over the age of 21. As a result, many reactions on social media have involved speculation as to whether these alleged assailants were actually Evo 2019 attendees, strangers, or a mix of both.

“Nobody should ever feel unsafe for being a part of the FGC [fighting game community],” she wrote. “Last night during the Evo Red Bull after party, a man stuck his hand up my skirt and assaulted me. I turned to confront him, the guy got physically aggressive, and my friend jumped in to push him away. A fight ensued. Esports Arena / Luxor staff escorted him out and handled the situation well. I am trying to follow up with a name. Sucks that such a great Evo had to end this way. Big thank you to @imJoskii who had my back. It could’ve been much, much worse if he hadn’t been there.”

“I’m glad I was there for you Zorine,” wrote the friend that Te tagged in her tweets. “I’m so sorry this had to happen, and so sorry to anyone who witnessed what happened without context. I met so many wonderful men and women of the FGC this weekend, and I’m so disappointed it had to end this way.” Neither Te nor her friend have yet responded to Kotaku’s request for comment.

Ana “SMGxPRINCESS” Black, who competed in Mortal Kombat 11 at Evo and is a streamer for Equinox Gaming, also came forward with sexual assault allegations from the same party.

“I lost track of how many times I was groped at the Esports Arena Red Bull party last night,” she wrote in a tweet. “I didn’t make a big deal about it and just walked away bcz I didn’t want to ruin the night. Keep your hands to yourself, or you’ll get one in your face next time.”

“Regardless of everything that happened, I’m happy I did well in my MK11 pool and had loads of fun with my teammates this weekend,” she wrote in a follow-up post. “Even made friends with new people and felt so welcomed in the Tekken Community.”

When reached by Kotaku, Black said that she had been groped when walking by “a group of men,” as well as when she had declined to dance with a man.

“Most of the people at the party were there to dance and have a good time, but there was a small group of individual men that would go around the room and touch any women they came close to,” Black told Kotaku. “None of the women I’ve seen said anything. They just kept dancing or walked away… There was a point during the party where I went to the second floor and was looking down onto the dance floor. I witnessed their actions from there. I didn’t recognise any of them, and I’m pretty confident I know most players in the FGC.”

Black said that she had not spoken to event security staff about any of this on that night, only telling her friends, who had not witnessed what she said had happened to her. She explained that she didn’t report the incidents because she “didn’t want to make another big scene and ruin our night.”

After she had left the party, Black heard from others that “the staff had already escorted another man who sexually harassed/assaulted another woman.” Black says she did not see this incident play out: “I had left the party and within seconds, he was escorted out. And then we heard that it was in relation to a sexual assault.”

CEO Gaming tournament organiser Tong Lee posted this morning that he believed a drink intended for a female friend of his at the party had been drugged.

“I only had three drinks last night but I took a drink that was intended for a woman friend of mine and that’s the last thing I remember all night,” he wrote on Twitter. “Definitely got roofied. This shit is not OK. What the fuck is wrong with people?”

In a follow-up tweet, Lee clarified that this, too, happened at the Red Bull after-party. “This was at an FGC event, the drink was given to a member of the FGC, from a member of the FGC,” he wrote. “I’m not naming anyone yet, but I just want to tell all my men and women to not blindly trust everyone, just because you wouldn’t expect it from them,” he said.“I don’t want to accuse the person without evidence.” Lee has not yet responded to Kotaku’s request for comment.

The HyperX Esports Arena provided Kotaku with the following statement: “We are aware of an incident that occurred last night at the Arena. Safety of our guests is always our top priority and we are cooperating with local authorities on the matter. We will not have any further comment at this time.”