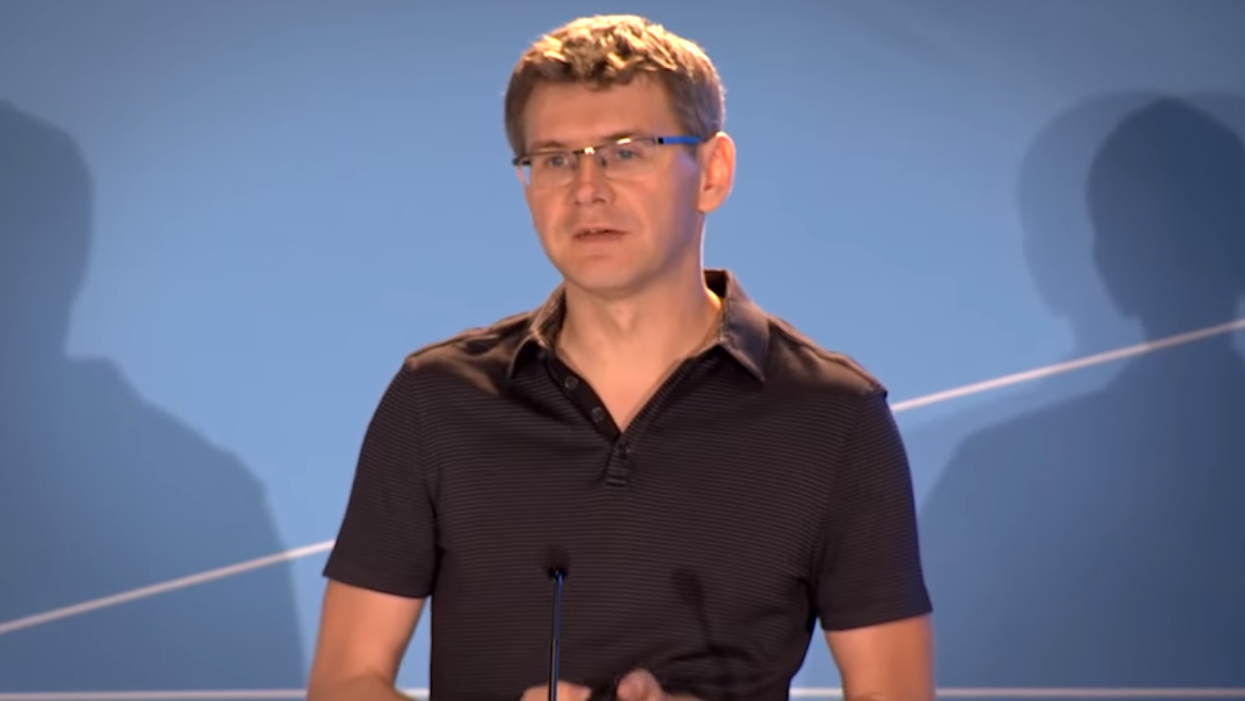 Michael Antonov during a 2014 presentation about developing the Oculus. (Screenshot: Oculus, <a href="https://www.youtube.com/watch?v=PoqV112Pwrs">YouTube</a>)

At first, Taylor described the incident without revealing the person’s identity. “They showed me VR demos, but put their hands up my skirt while they did so— WHILE I WAS STILL IN VR,” Taylor wrote on Twitter on Tuesday night. “The shock and fear of that happening while I was essentially blindfolded.” In a follow-up Twitter thread later that evening, she named Michael Antonov.

“Fuck it. That this experience sticks with me years later…means something,” she wrote. “This person in a position of power when VR was new made me feel small. I shouldn’t discredit my experience. Michael Antonov was a fucking creep to me at an Oculus event. Men don’t get to keep doing this.”

Andrew Bosworth, Facebook’s current VP of virtual reality who was named to that position last year, called Taylor’s story “sickening” on Twitter. “I’m sorry it happened then and that you have to face the trauma again now,” he wrote. “I took over our AR/VR and Oculus team in 2018. I do not accept this behaviour. I’ve asked to understand how the situations were handled that have been brought up.”

Bosworth wrote in a follow-up post that harassment isn’t tolerated or ignored at Facebook, but due to confidentiality, he could not share any information about instances in which the company has taken action against particular individuals.

According to Taylor, the assault happened while she was at the 2016 Game Developer Conference in San Francisco. Oculus hadn’t officially been released yet and Antonov, whom Taylor said she met at a conference after party, had offered to give her a private demo back at his apartment. Taylor was finishing up college at the University of Texas at Austin and working at an Austin-based VR startup at the time.

“It was my first time at GDC or any major games industry event, and I was eager to network with other developers and the VR community,” Taylor told Kotaku in an email. “Meeting Antonov was an exciting moment for me— I was a huge fan of Oculus, having gotten my start in VR development using the Oculus Rift DK2.”

While the two chatted in line for a VR demo at the after party, Taylor said Antonov mentioned he had a consumer Oculus Rift kit back at his apartment only a short walk away.

“He offered to show me unreleased demos and games slated to launch with the Rift later that month. I didn’t think this was odd— Just the day prior, I tried a demo in the hotel room of someone I met at another VR mixer,” she said. “It was a normal demo, nothing strange. Being new to the industry, I thought this was normal.”

Excited to try some new games on the as-of-yet-unreleased hardware with one of the engineers behind it, Taylor agreed.

“In his apartment, it was just the two of us when he loaded up a demo in the Rift,” she said. “I put on the headset and started playing through the demo tutorial. After playing for a few minutes, without warning or saying anything, Antonov put his hand on my leg, inappropriately touching me and stroking my leg, and shifting his hand underneath the skirt of the dress I was wearing. I remember immediately feeling confused and panicked, and froze up while I was still in the VR headset and he touched me without consent.”

Taylor said that’s when she realised why she had really been invited back to his apartment, but she was afraid of what he might do if she confronted him. “I recall feeling ashamed and stupid for getting myself in that situation, and didn’t know how to leave,” she said. “I felt uncomfortable and scared, but was afraid to refuse his advances— after all, he was a co-founder and executive for one of the biggest VR companies in the world. I was afraid of being blacklisted from the industry I had just joined and was so excited to be a part of. I was afraid of potentially severing a relationship between the VR company I worked for and Oculus. I was just… so afraid.”

For the rest of the visit, Taylor said she tried her best to keep space between them and left at the first opportunity that presented itself to head straight back to her hotel. Racked by feelings of shame and powerlessness, she said she tried to forget about the incident. “I never told anyone in my industry network or local circles, nor have I confronted anyone at Oculus about this behaviour,” she said.

Taylor only decided to come forward now beacause of similar stories shared this week by others in the games industry about sexual abuse, harassment, and assault. On Monday night, two women came forward to accuse Skyrim composer Jeremy Soule of sexual misconduct. One of these two women accused Soule of rape.

“To see the overwhelming majority of people who have experienced that sense of helplessness share their stories is so incredibly validating. There’s a sense of reclaiming our stories and our right to exist in this industry without being harassed, abused— loudly stating that nobody has the right to make us feel small,” Taylor said.