All The Wonderful Food I Found In Gears 5 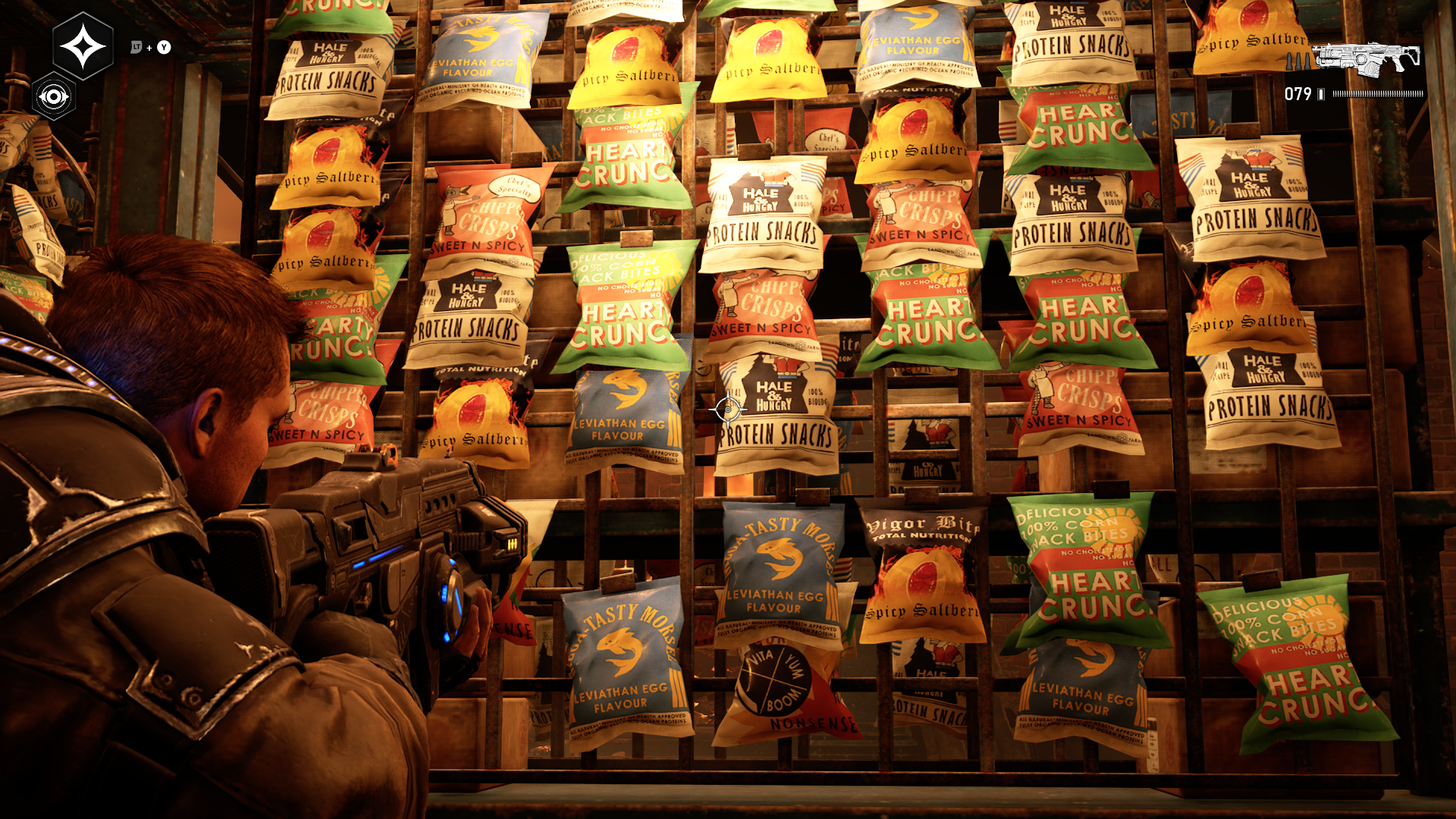 When you think of Gears of War, you probably have images of big dudes with chainsaw guns fighting giant creatures and monsters. And that is a part of Gears 5, for sure, but another thing you can find in the latest Gears of War game is not as violent or loud. Hidden throughout Gears 5 are plates, tables, and bags of tasty looking food and snacks.

Early on in Gears 5, you are exploring an urban area filled with hotels, museums, apartments, and stores. This is where I first noticed a stack of desserts on a small table. 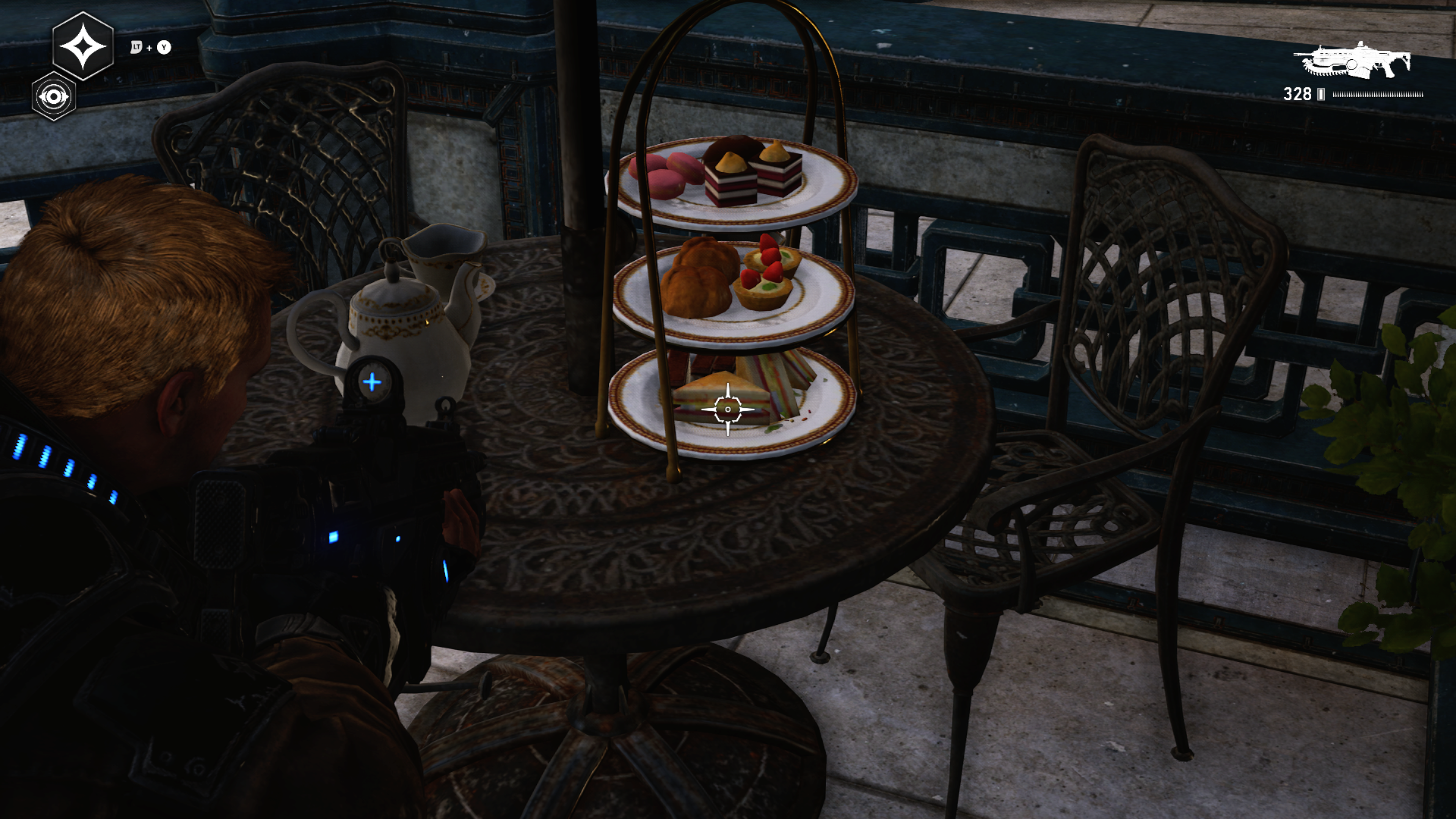 I had just finished up a battle and stumbling across a fragile tower of sweets was surprising. I was also shocked at how detailed these snacks look considering they will most likely never get noticed by most players. I decided to keep an eye out for more food after this chance encounter with deserts. I was not disappointed.

As it turns out, Gears 5 is filled with food. I spent a large chunk of time exploring each area, looking for a new meal or snack to photograph. And very often I would find some food tucked into a corner or laying on a table. 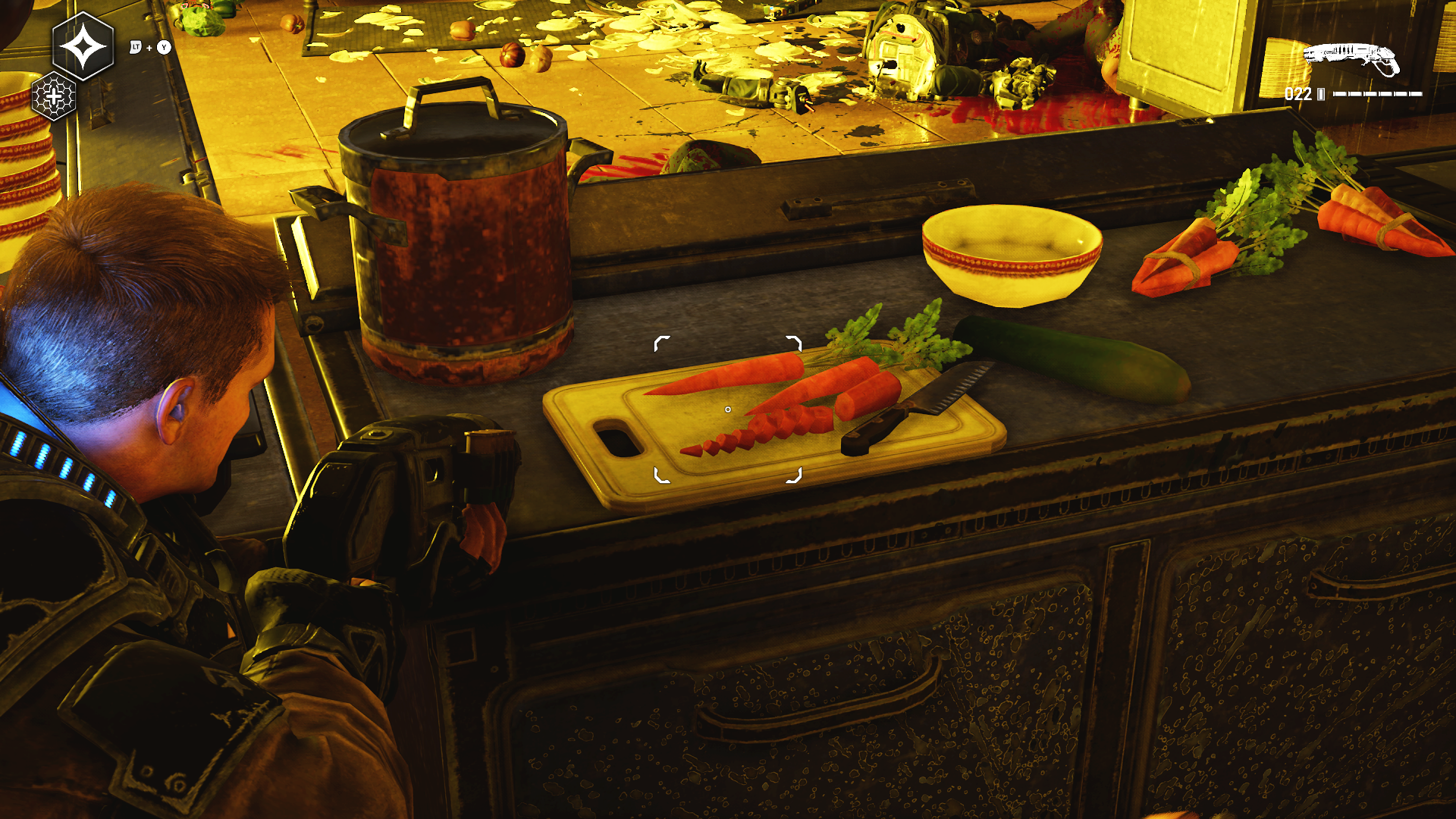 Sometimes the food I found was fancy, paired with fine wine and some lovely plates and flatware. Other times I would find food piled up in and stored in open baskets laying on dirty tables or counters. Some of it was even for sale. Not all the food was small and tucked away. Some food was bigger and easier to spot, like a giant cake. Getting a photo of this cake proved tricky. I wanted to really get close to it and snap a nice screenshot. Gears 5 doesn’t have a photo mode, so I was forced to clear out the area before snapping a nice picture.

However, the enemies were very rude and would often shoot the cake, destroying it in the process. So I would reload the checkpoint, trying to keep the battle away from the cake. Eventually, I was able to take a nice photo of the large cake. And then an enemy I didn’t kill shot at me, missed and hit the cake. 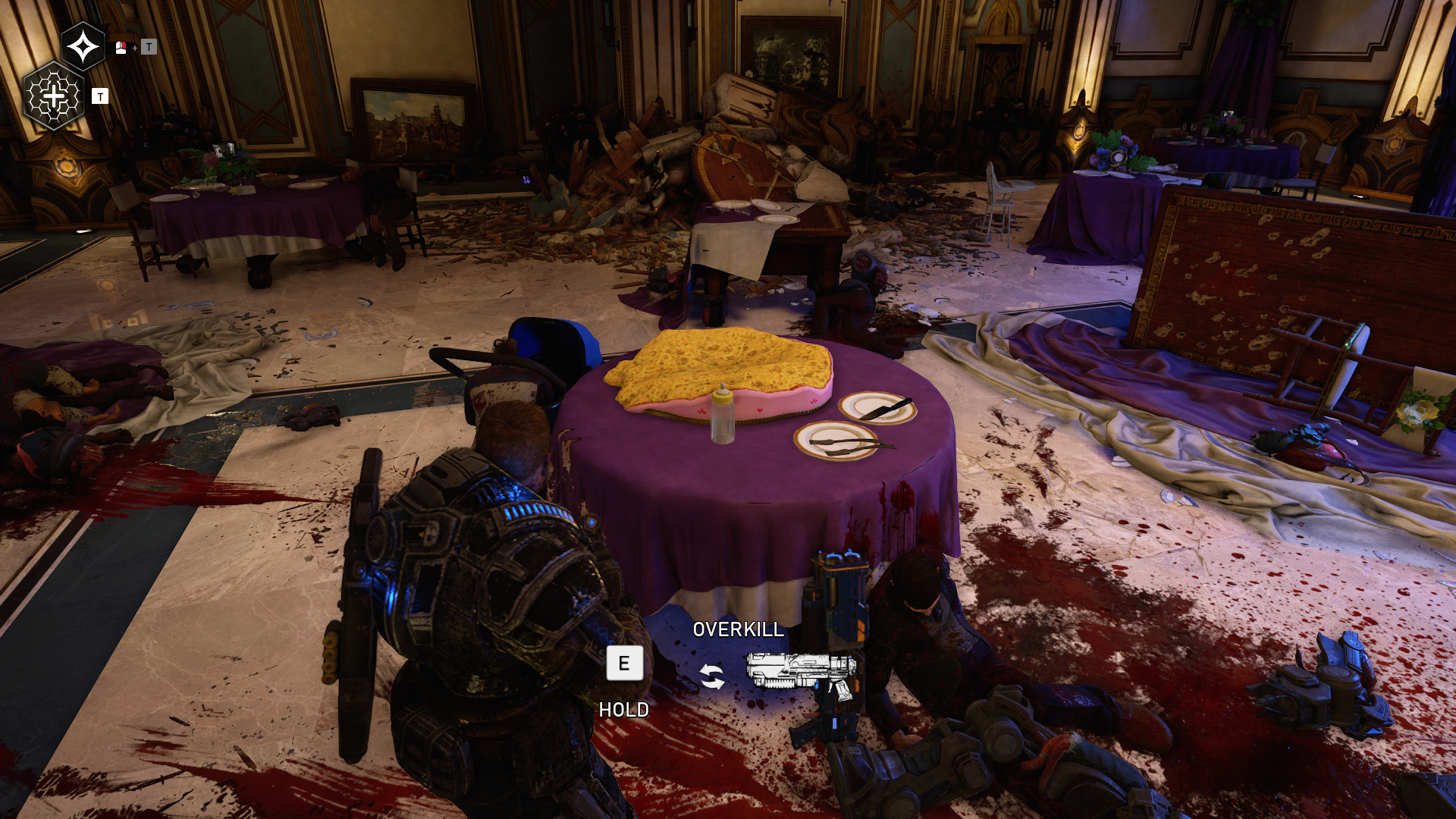 I also found food that was still being or was just recently prepared, like some meat cooking up on a kitchen grill. 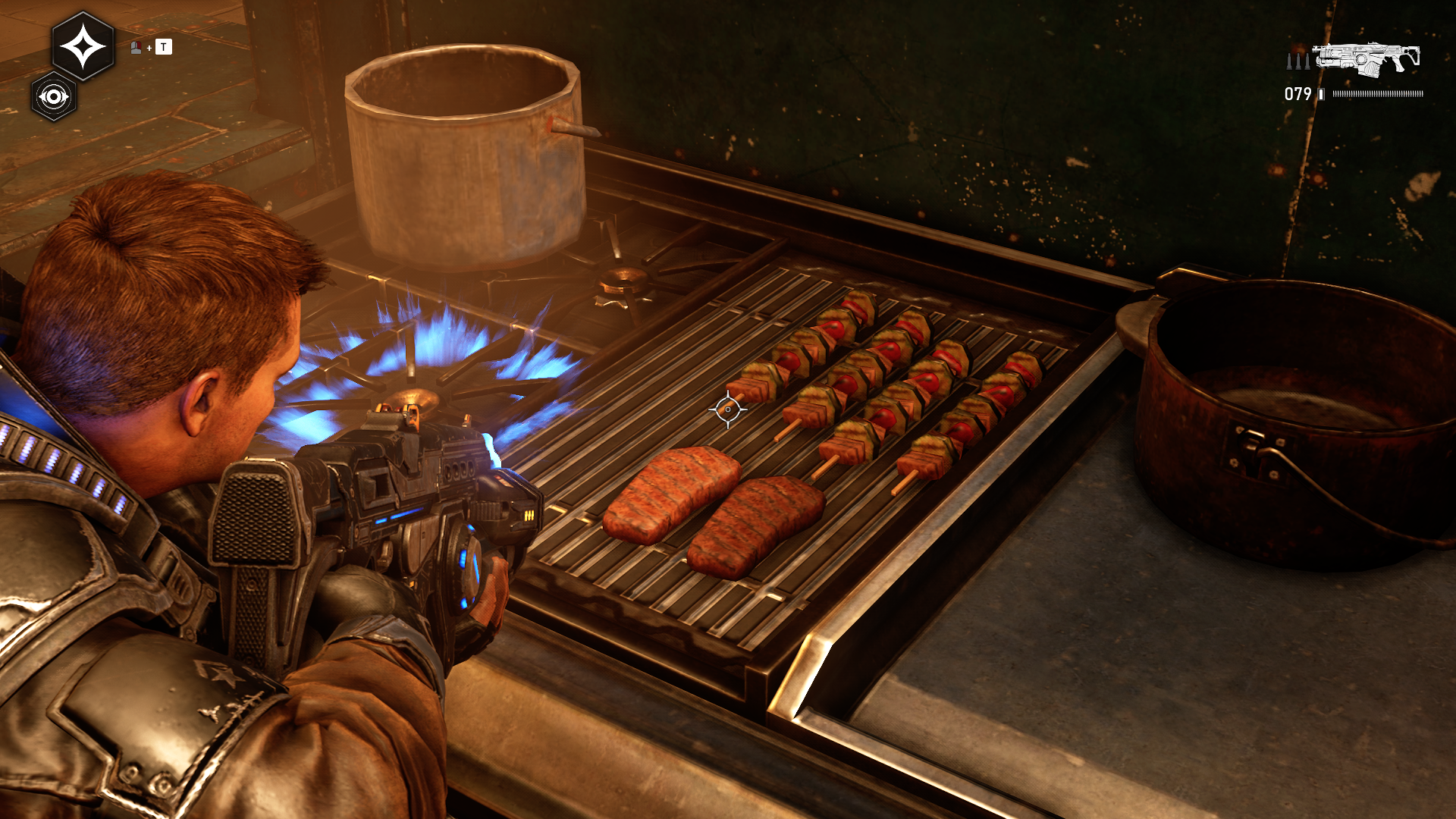 Or just-baked bread, resting in racks and waiting for a dinner that at this point has been cancelled. Hard to throw dinner parties when the city is being attacked by deadly monsters. 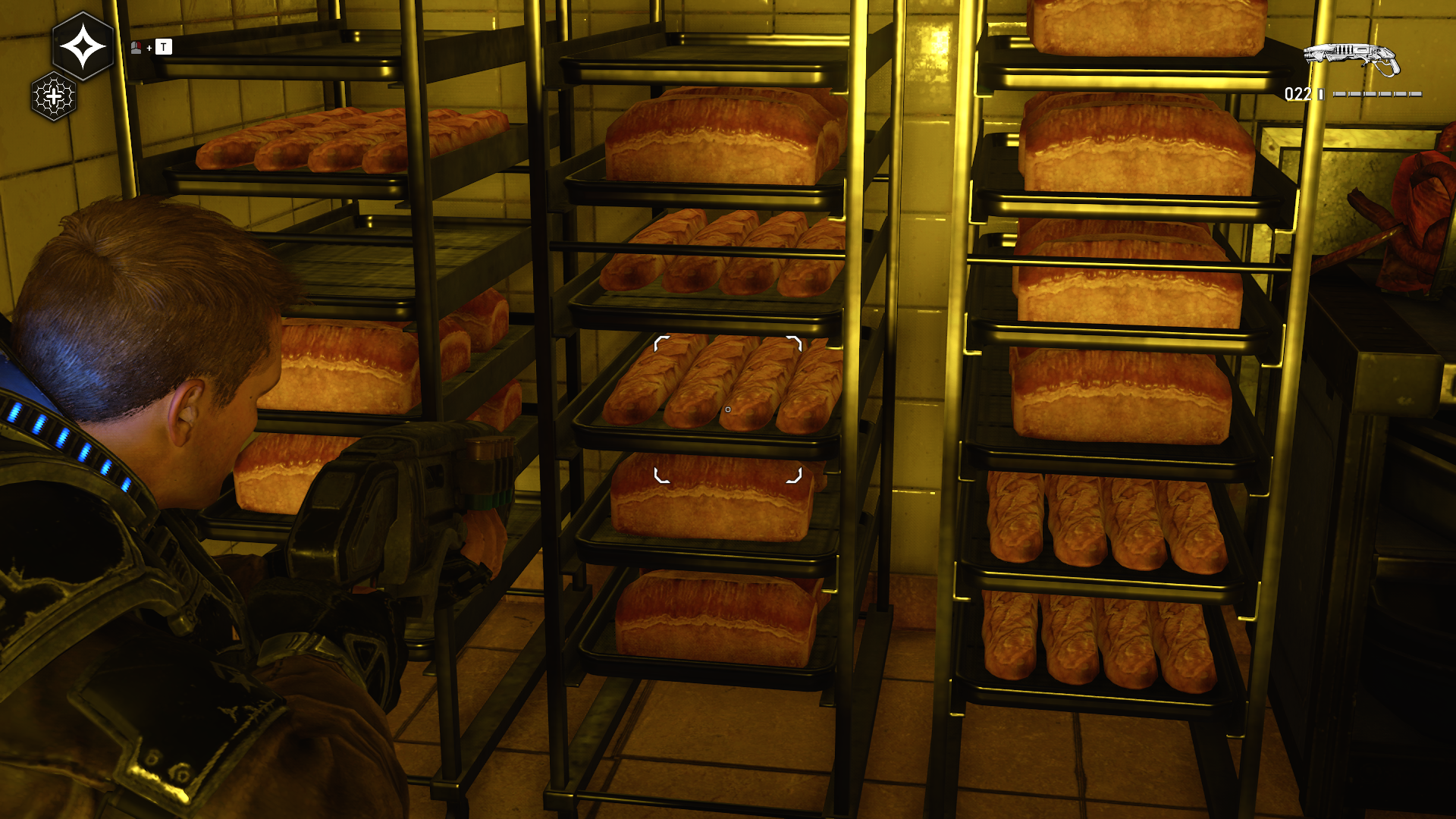 While most of this food looks great and tasty, not all of it looks edible. 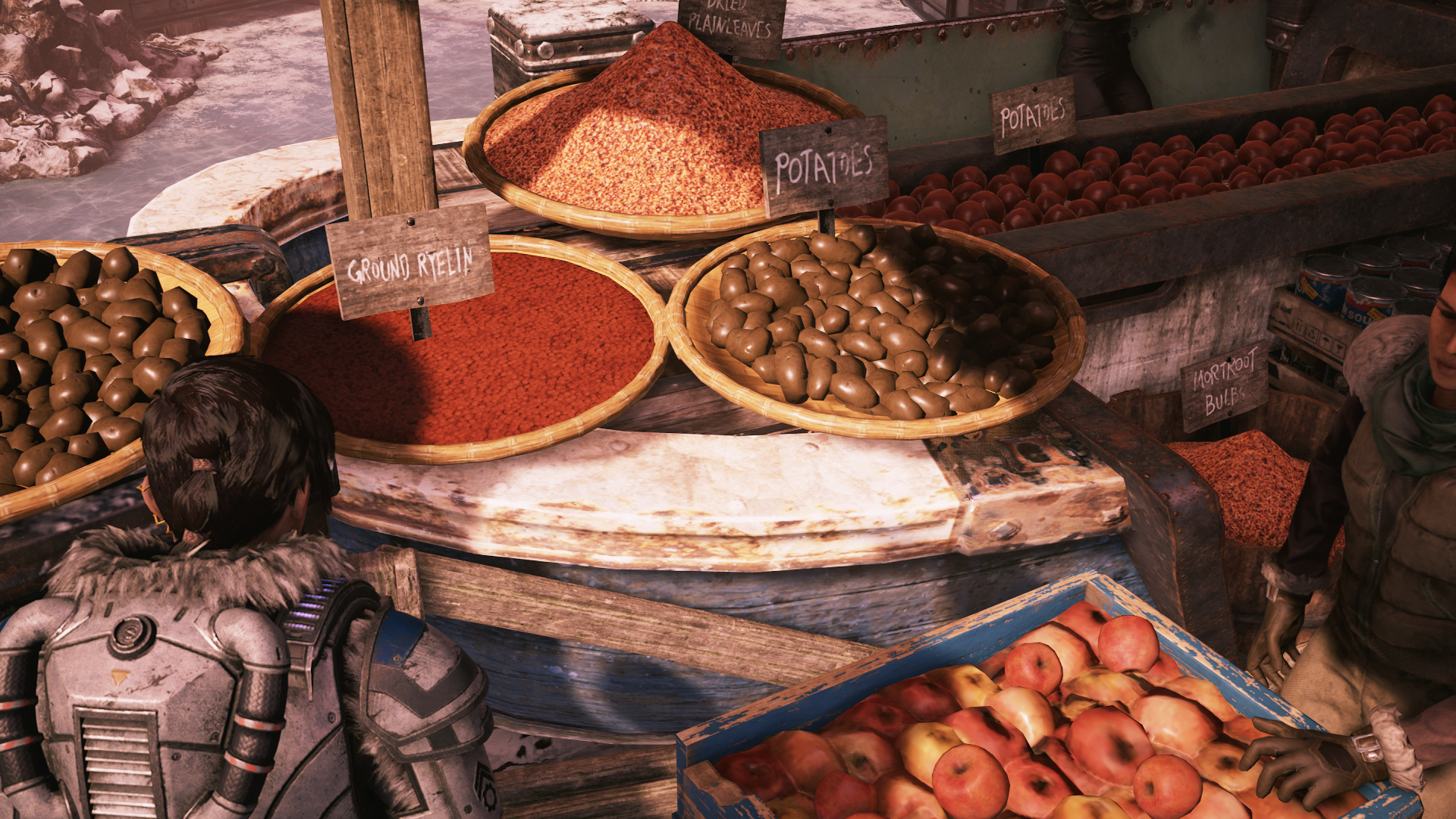 For example, a bucket of potatoes that look nothing like potatoes. They honestly look more like smooth, brown rocks. Maybe they are just rocks and this person is a con artist, trying to make a quick buck?

When I focus on a specific and small element of a game, like masks or posters, I am always surprised at how much detail and work goes into parts of games that most player completely miss. While many will miss the smaller details, all of these small things add up to create a large and believable world.

Well, until a giant monster destroys the wall and starts shooting spikes at you. 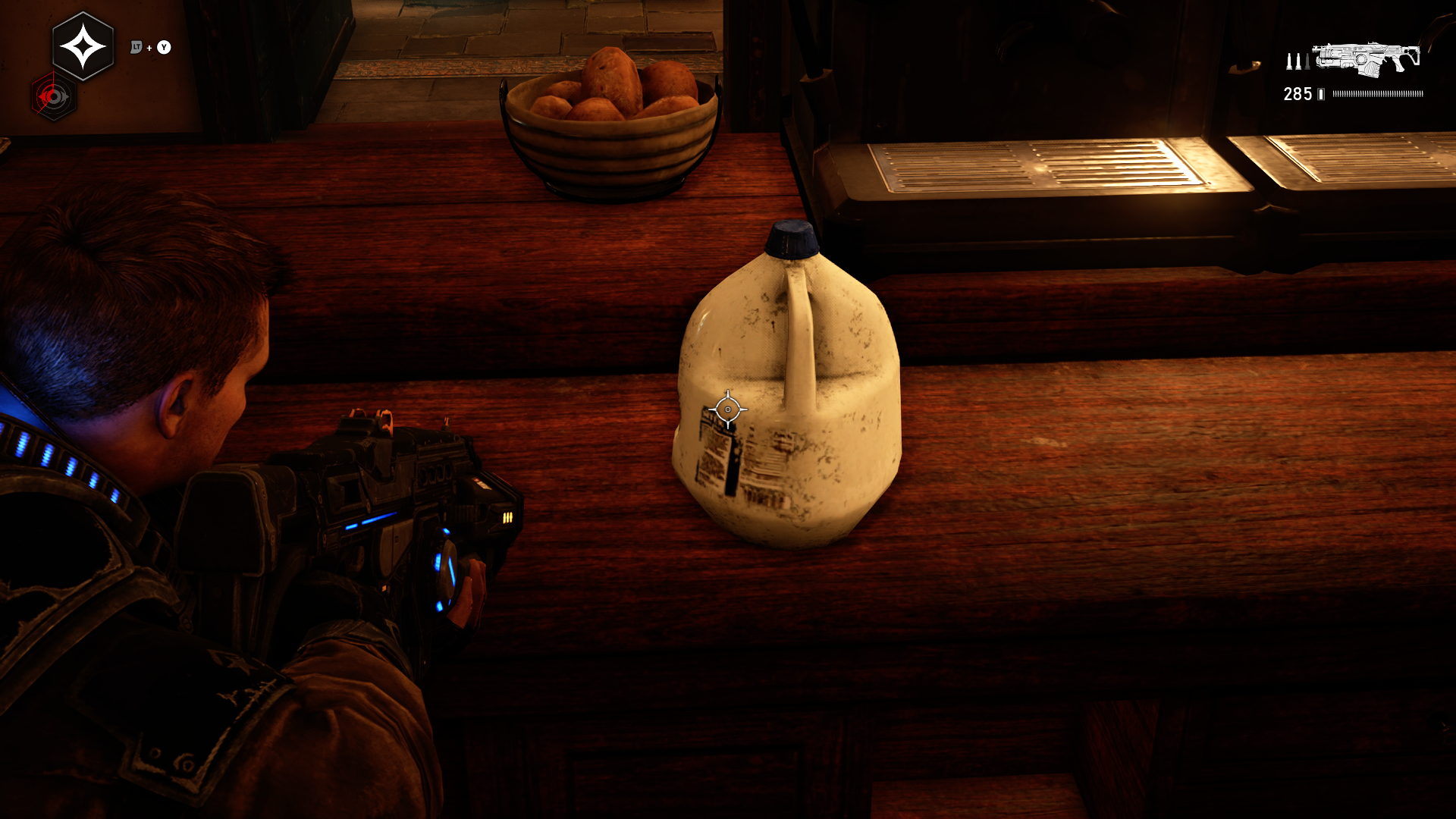 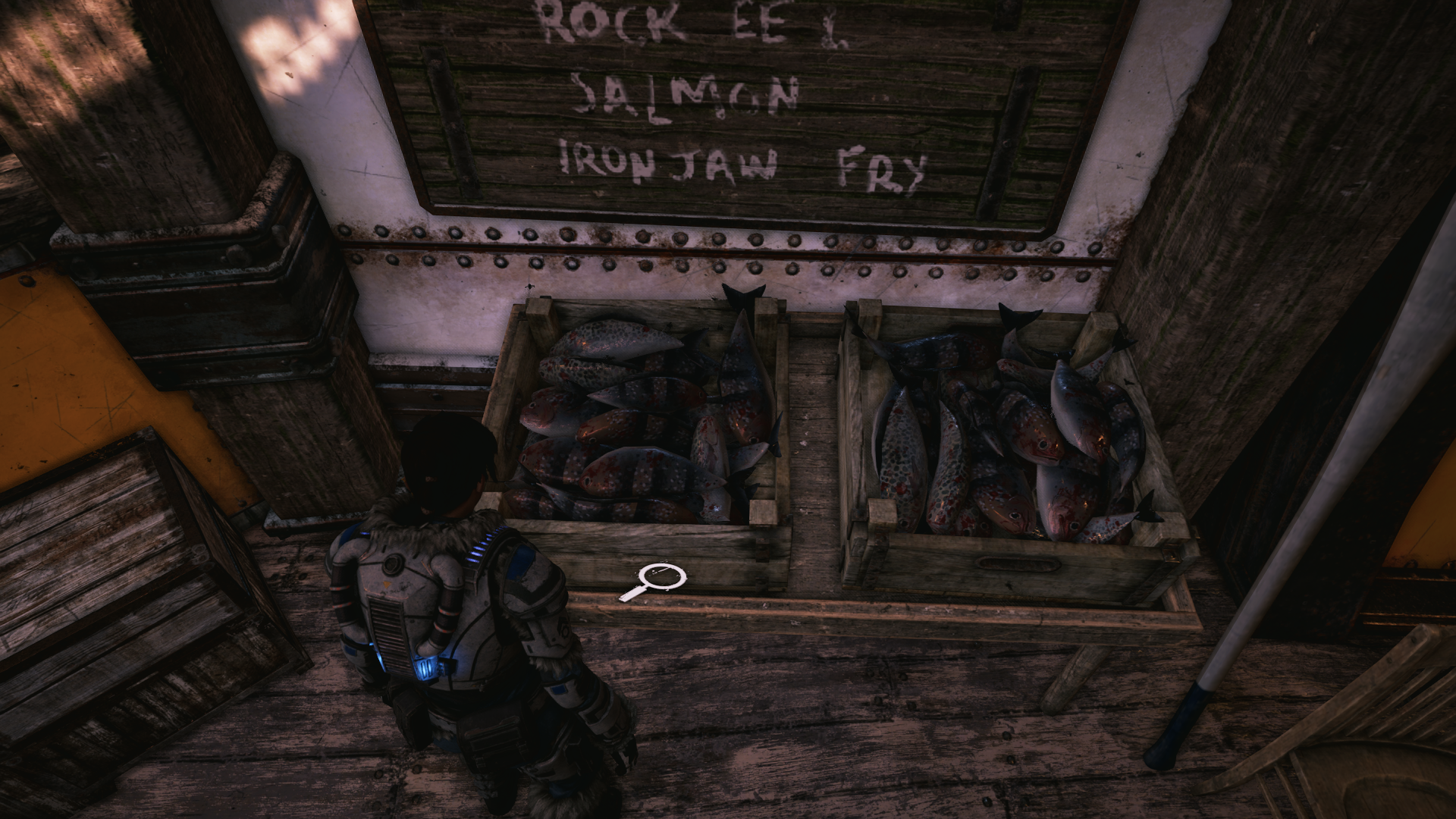 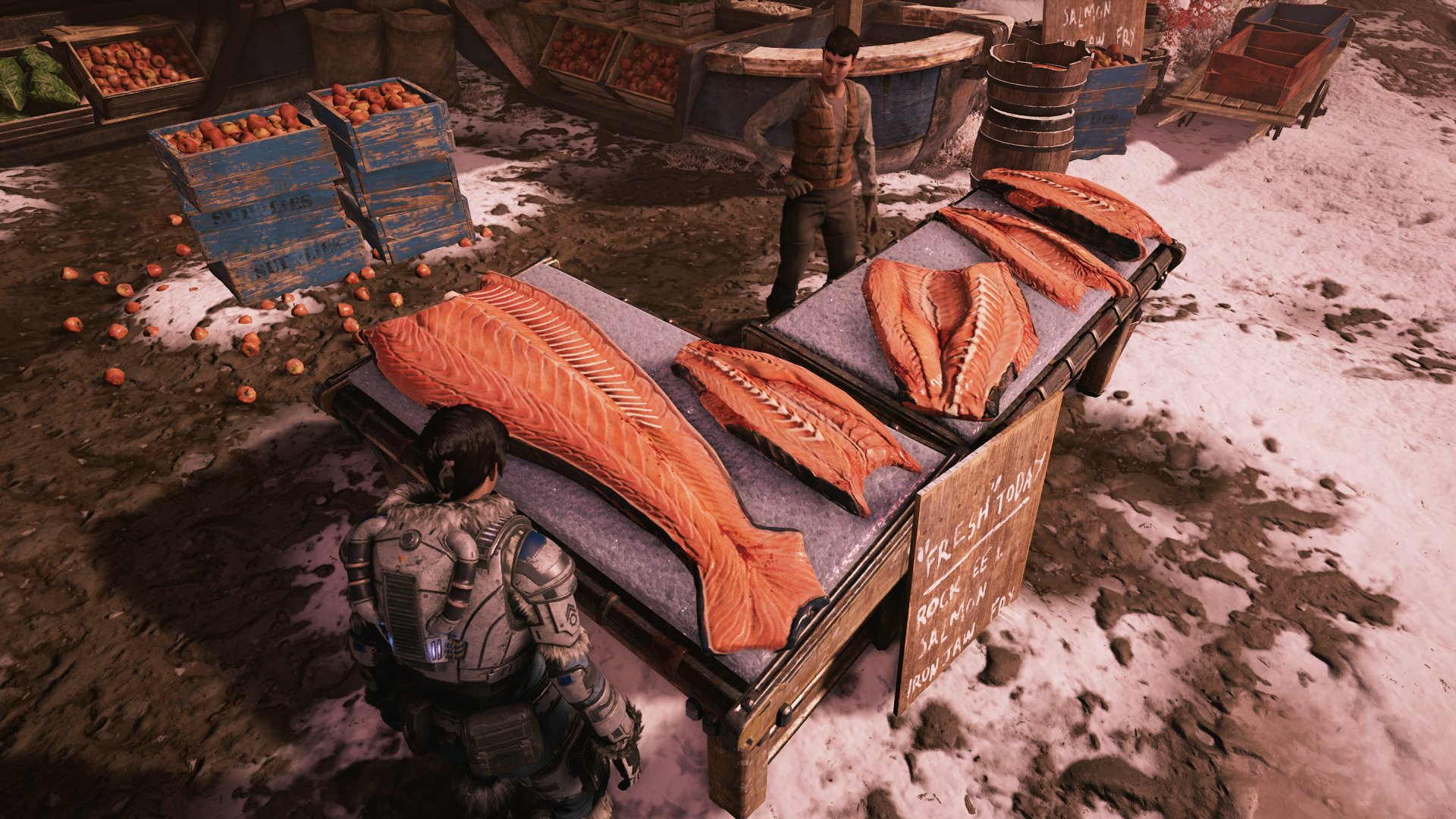