Since Star Wars Battlefront II released in 2017, fans have wanted to know: Where are the clone commandos? These long-awaited badasses are finally in the game, bringing a rough-and-tumble play style that’s focused on staying alive and adapting to any situation.

It’s been a long time since Star Wars: Republic Commando. Released in 2005, the tactical shooter introduced players to a whole new sort of clone trooper. It was a tense game, mixing in hints of Rainbow Six for a grittier experience. Since then, clone commandos have shown up in book series and television shows. They felt like a natural fit for Battlefront II, whose matches are packed with hero characters and special troops. Play enough and you can hop into an assault walker or take to the field as Luke Skywalker.

But commandos were nowhere at launch, and Battlefront II needed time to rebound from its controversial microtransactions. Since then, the game has expanded, focusing particularly on adding more content from the Clone Wars. It’s brought excitement to a once-troubled game.

The arrival of clone commandos doesn’t radically alter Battlefront II, but it brings some welcome fanservice and flash. Each new addition to Battlefront II makes it noticeably more Star Wars, and alongside new maps like the strange fungal world of Felucia, clone commanders add new surprises to the battlefield.

Playing as a clone commando gives you a few neat tools. In addition to incredibly durable armour and a stylish blaster, players can add an explosive attachment to their weapon that damages vehicles and lays waste to enemy infantry. Like officer-class heroes, clone commandos can temporarily boost the defence of anyone around them as well as themselves. This ability pairs nicely with their armour, allowing them to stay in the fight longer. A short-range repulsor blast also allows them to knock back nearby enemies.

It’s not the most dramatic kit, but it picks and chooses skills from multiple different classes and heroes to create a durable amalgam. 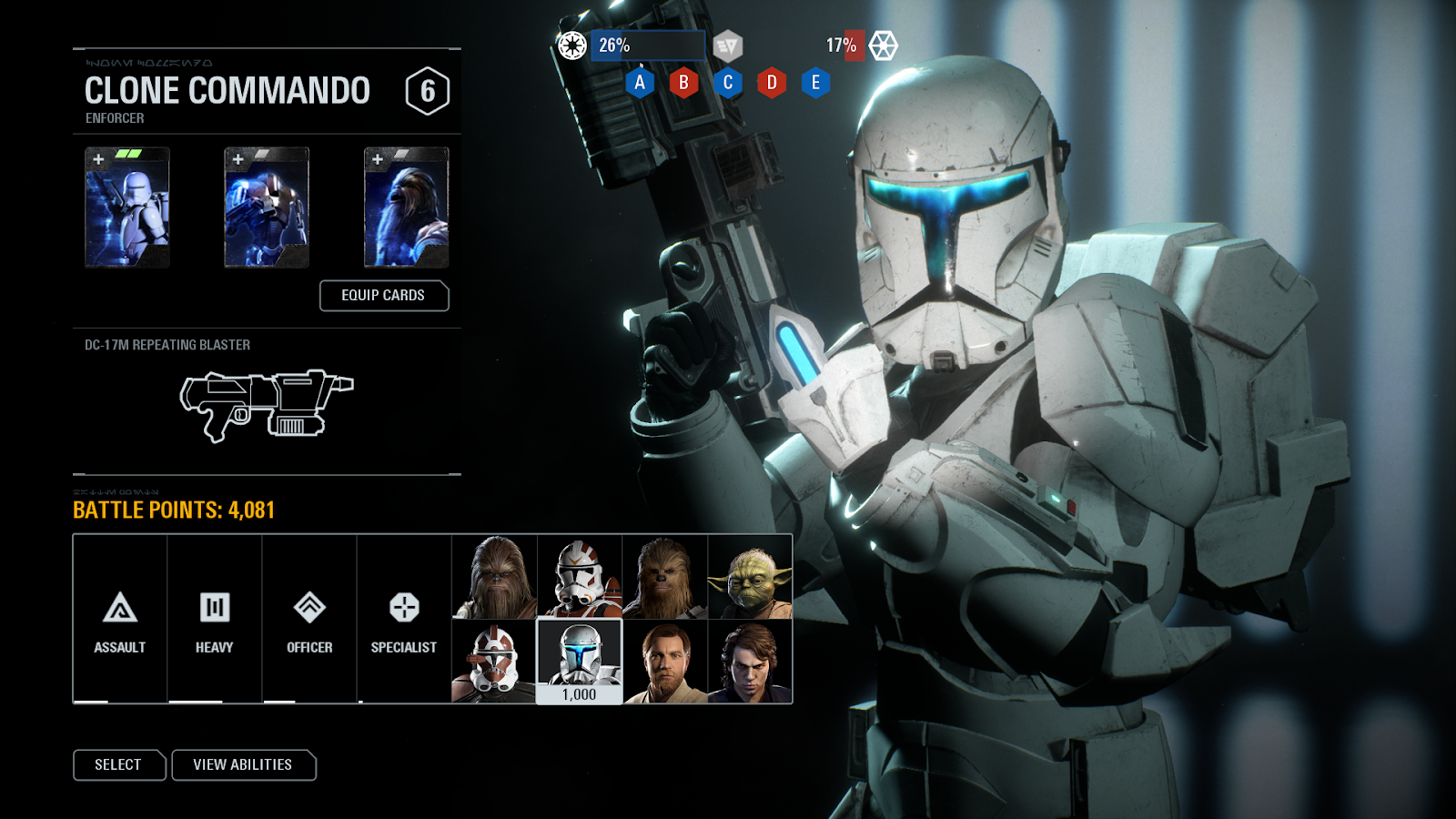 The clone commando can do a little bit of everything, but that jack-of-all-trades status comes at a cost. Having explosives is nice, but just because you can make things go boom, that doesn’t mean it’s a smart idea to square off with a tank. Likewise, you might have a stabby vibroblade mounted on your wrist, but that doesn’t leave you in a good position to tangle with Darth Maul.

The Clone Commando’s strength rests in survivability. Played well, you can last most of the match and will always have a useful tool at your disposal even if other classes might do those things better. As a result, reactions from players during my matches were contentious. Some took to chat boasting of their long-lived sprees on the battlefield, while others bemoaned that the commando wasn’t as powerful as they thought.

More than anything else, commandos are just stylish. They only cost 1,000 points to unlock, which is something you can earn after one or two enemy kills. Right now, that means the battlefield is usually full to the brim with the maximum amount of commandos, with their iconic helmets and looks. It’s just cool to see them around, running next to an armoured Obi-Wan Kenobi, as capital ships duel in the skies above.