In “The Evolution of Craig” episode of Cartoon Network’s refreshingly pure animated series Craig of the Creek, our young hero struggles with the idea of growing up and the fear of transforming into a different, older person. With a tadpole taking the place of a pocket monster, Craig learns a Pokémon-inspired lesson about the benefits of evolving as a person.

Craig of the Creek centres on a trio of young friends growing up in a magical throwback neighbourhood where children go out and play instead of sitting inside fiddling with screens.

The woods and waterways surrounding Craig’s neighbourhood are home to a vast society of children whose imaginations cast them as adventurers, explorers, inventors, and defenders of their domain.

Nine-year-old Craig is a cartographer, mapping his magical land with his constant companions Kelsey, a red-headed eight-year-old who fancies herself a warrior, and J.P., a tall, bumbling, 10-year-old with a Southern accent and a kind heart. 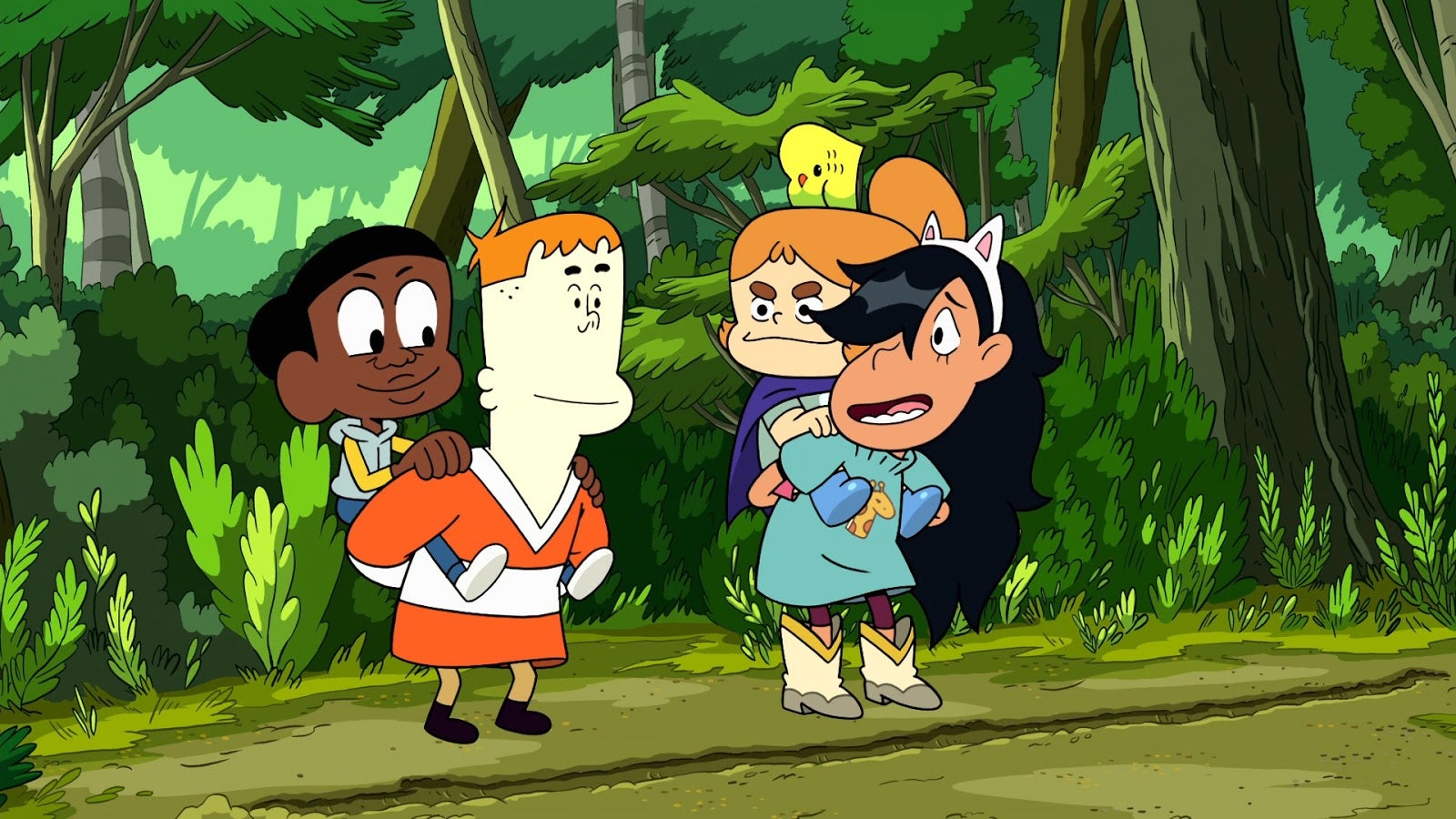 The show reminds me of my own childhood, roaming or biking through the woods surrounding my suburban Atlanta street, going on tiny adventures that seemed so much larger back in the day. My friends and I were a little older and some of our adventures involved beer or pot, but the vibe is the same.

It’s a show adults can appreciate, as demonstrated by Kotaku contributor Ben Bertoli’s article on one of the show’s earlier video game-themed episodes and subsequent interview with its creators.

“The Evolution of Craig”, which aired on August 25 never directly mentions Pokémon. Craig and his grandfather, fresh from a visit to the library to pick up a book for the boy’s fifth-grade summer reading assignment, stumble upon a tadpole stranded in a puddle. With a predatory bird lurking dangerously close, Craig’s grandfather urges him to take the baby home to protect it as it grows.

In response, Craig hurls a plastic capsule from a vending machine at the puddle, disappointed when it doesn’t work “like in that show.” Craig ends up collecting the tadpole by more conventional means, taking it home and placing it in an aquarium. 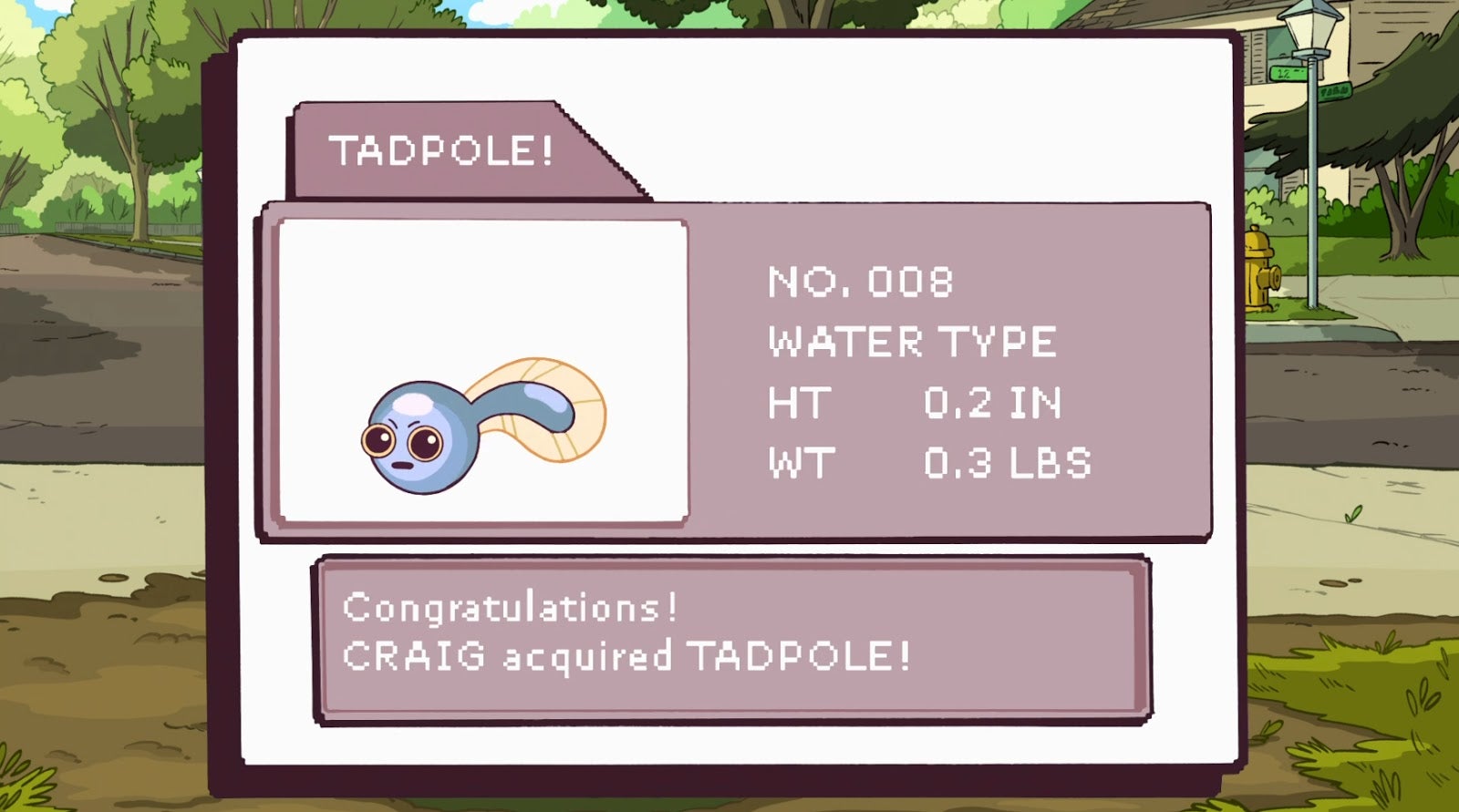 The tadpole is a welcome distraction for Craig. With the summer coming to an end and fifth grade looming, the imaginative youngster is worried about his future. His fifth-grade summer reading assignment is an adult book. Soon he’ll have adult responsibilities.

Instead of going on adventures, he’ll have to do adult things like driving around for no reason. Will his friends still be his friends? Will the creek still be his haven? Unfortunately for Craig, his distraction doesn’t last long. His tadpole friend, as tadpoles do, is slowly transforming into an adult frog. 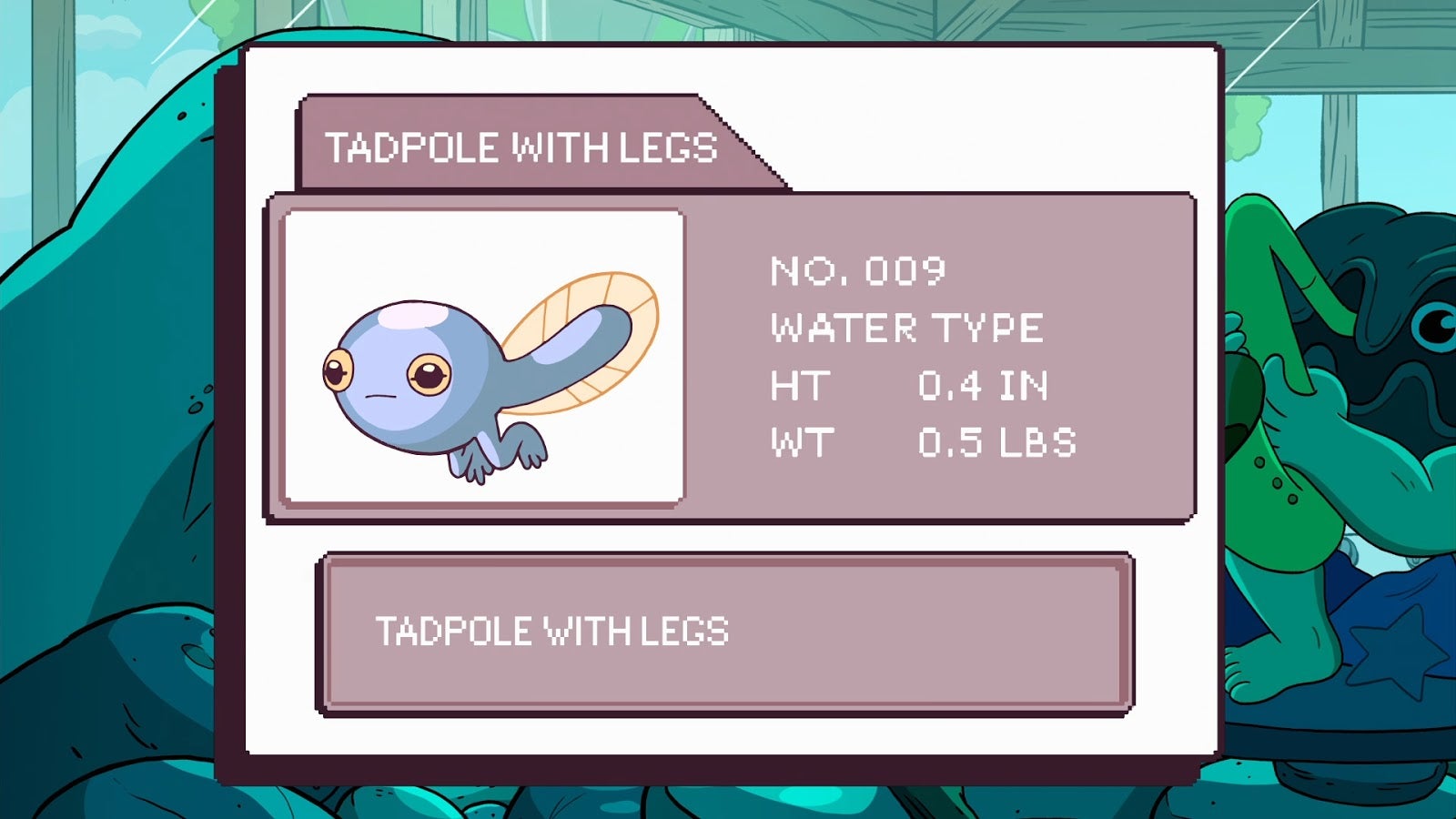 The Pokémon parallels in this episode are plentiful. The evolution cards are brilliant. The chiptune musical cues are wonderfully subtle. Commercial breaks feature hilarious “Who’s That Creek Kid?” segments featuring incidental characters no one remembers.

At one point, worrying that he’s turning into his stodgy older brother Bernard, Craig imagines himself evolving like a Pokémon and getting into a turn-based battle with his friends when they don’t recognise his older, more mature self.

The tadpole inevitably becomes a frog. Craig tries to hide the now-adult amphibian from his grandfather but gets caught. The frog doesn’t want to leave. Craig wants to play with his friends. He’s not ready to go to fifth grade and evolve into Bernard.

Grandpa sets his grandson straight. “I know change is scary, but just because you’re growing up doesn’t mean you’re going to stop being you,” the old man explains. “You’ll always be Craig. You’ll just know more and be able to do more.”

Change is indeed scary. I first discovered Craig of the Creek in the hospital last year following a harrowing health issue. I turned on Cartoon Network figuring it would bring me closer to my children, who were too young to come see me in the intensive care unit. Watching Craig of the Creek I imagined them outside playing in the woods, but I also saw myself. Newly-paralysed from the chest down, I was struggling with my own scary change. The show helped. I only wish “The Evolution of Craig” had aired a bit sooner.

The episode ends with an exciting battle between the evolved tadpole and his nemesis, and Craig one step closer to being the very best Craig he can be, like no one ever was.