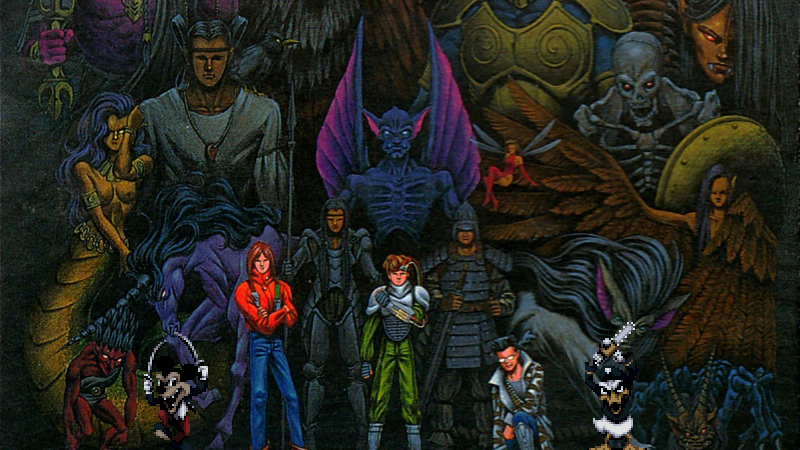 Before the arrival of Kingdom Hearts in 2002, it seemed impossible to imagine Disney characters appearing alongside original characters in a Japanese role-playing game. But it apparently came close to happening back in 1992, almost 10 years before the world was introduced to Sora and company. As some longtime fans may already know, two unused sprites with a strong similarity to Mickey Mouse and Donald Duck were left hidden in the assets for a little game called Shin Megami Tensei.

Atlus’ Megami Tensei franchise has become a household name over the last few years thanks in part to the Persona spin-off series. The first-person dungeon-crawling of the initial games may seem archaic by modern standards, but over time, Shin Megami Tensei games grew to rival powerhouses like Final Fantasy and Dragon Quest thanks to their mature storylines, modern setting, and usage of figures from folklore and myth as Pokémon-style battle buddies. Megami Tensei first arrived on Western shores with Revelations: Persona in 1996, and its popularity has only grown from there.

The third instalment, 1992’s Shin Megami Tensei on the Super Famicom, is set in modern-day Tokyo. But in the alternate universe of this game, the city is under siege after an experiment gone wrong has opened up a portal to the netherworld. The main character is given access to a special computer program that allows him to communicate with demons and win them over to back him up in battle.

As is common with the Megami Tensei franchise, the story goes to some dark places, including the potential for a direct confrontation with Lucifer, depending on the player’s choices. The main conceit was much different than what RPG fans were getting from the genre at the time, and that’s a big part of why the series has remained so popular decades later.

Shin Megami Tensei eventually tasks the player with visiting a theme park known as Tokyo Destiny Land, which sounds strikingly similar to Tokyo Disneyland, the overseas version of the popular American attraction that opened in Japan in 1983. On the surface, Tokyo Destiny Land is just another dungeon, full of mind-boggling NPC encounters and battles with various monsters.

In late 2018, diligent fans discovered that the area hides a couple of secrets: unused sprites for demonic versions of the iconic Disney characters Mickey Mouse and Donald Duck wielding swords and a chainsaw, respectively. 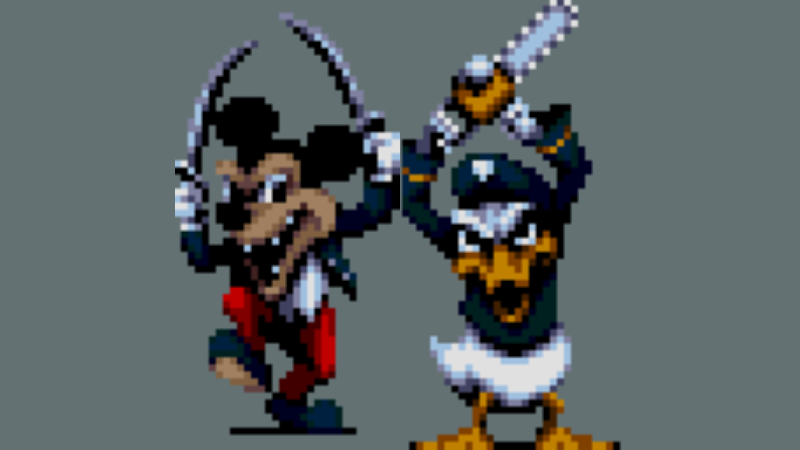 Tumblr blog Stealing Knowledge also once wrote about these sprites, pointing out that they appeared in the Digital Devil Saga 10th Anniversary art book originally released in 1997. This seems to have been the only time Atlus officially recognised that these Disney characters ever existed in Shin Megami Tensei. Kotaku has reached out to Atlus for more details.

A great deal of work obviously went into creating these imaginative sprites, but these versions of Mickey and Donald never actually appeared in Shin Megami Tensei. It seems possible that the game’s designers hoped to avoid tangling with the historically litigious Walt Disney Company, but in theory, these designs should have fallen under the realm of parody, along with the rest of Tokyo Destiny Land.

When it came time to port the game to the PC Engine (also known as the TurboGrafx-16 outside of Japan), two new NPCs were created that bear a strong similarity to the unused Disney-esque sprites: Zombie Mouse and Demon Duck. While these could also still be construed as parodies, they do also look much less similar to Mickey and Donald than the previous designs. 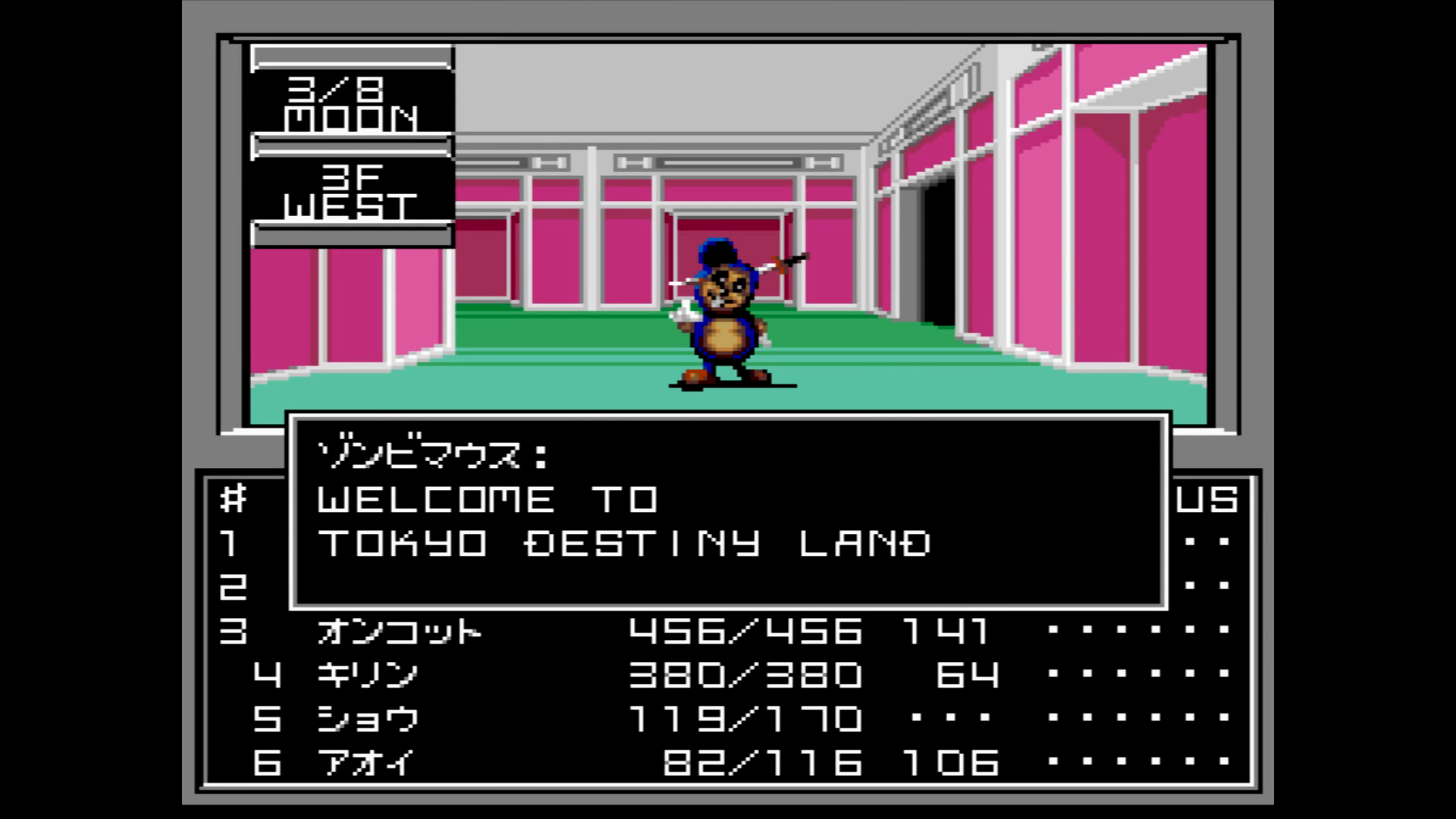 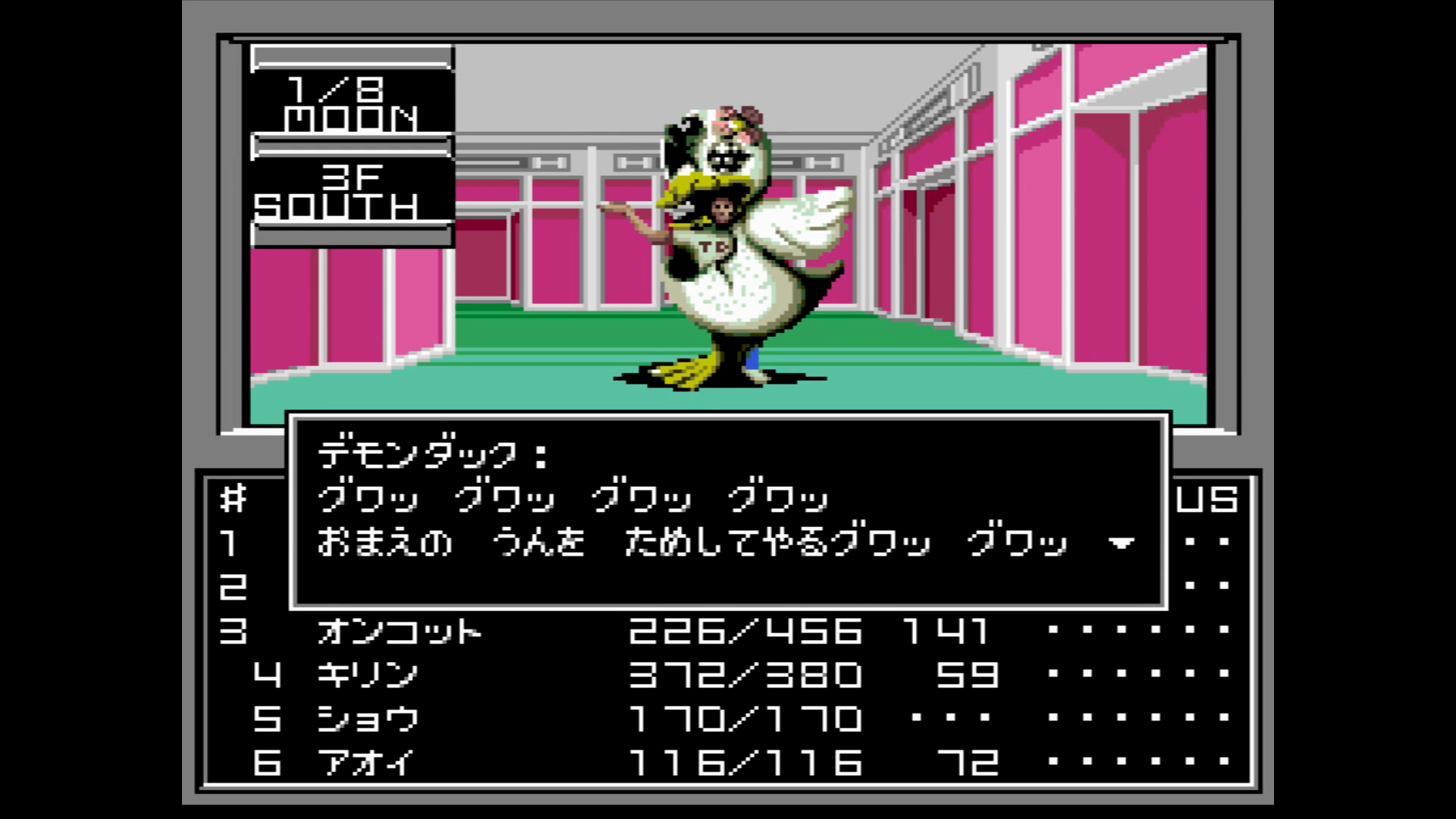 The game’s original audio also suggests that some version of these characters had originally been intended to appear in the game. Zombie Mouse and Demon Duck show up in spots where the protagonist would have previously just heard disembodied voices in the Super Famicom version of Tokyo Destiny Land. Now, those disembodied sounds seem to line up with the presence of actual, visible characters.

The Megami Tensei franchise is no stranger to parody and allusions; the games include homages to various figures from religions, folklore, and pop culture in the lineup of gods and demons. Megami Tensei II on the Famicom featured Friday, an enemy whose name, hockey mask, and chainsaw were obviously inspired by Friday the 13th slasher Jason Voorhees.

Sometimes, these homages don’t even bother to change the character’s names. Audrey, the plant monster from the musical Little Shop of Horrors, makes an appearance (by name) in Shin Megami Tensei II, as does Christine from the eponymous Stephen King novel about a possessed automobile.

Later in the series, Devil May Cry protagonist and half-demon Dante would feature in Shin Megami Tensei III: Nocturne as an official guest character. (This later became a meme due to the prominence given to advertising his cameo on the game’s cover.)

Megami Tensei lends itself well to these kinds of crossovers, because again, its compendium of demonic enemies and allies is comprised of extensive references to folklore and legends from all over the world. Where else can you recruit Baphomet, Loki and a Leprechaun for a boss fight against YHVH (as in, the Hebrew name for God)?

Sure, Mickey Mouse and Donald Duck aren’t gods or mythological according to most typical definitions of those words, but when over 157 million people made pilgrimages to Anaheim, Orlando, Tokyo, and various other global destinations to celebrate Disney’s golden calves last year alone, what else do you call them?

Well, other than Zombie Mouse and Demon Duck, obviously.