If you follow video game news relatively closely, you probably know Disintegration as “that upcoming game by one of the co-creators of Halo“ or “that game that in its reveal trailer.” In reality, however, the similarities are only skin-deep.

Disintegration, a production headed up by former Bungie creative art director Marcus Lehto, was playable at PAX West in Seattle over the weekend. Curious about what it actually was, I took it for a quick spin. While I found the mid-match action to be relatively straightforward, explaining it is a whole different ball (read: hover bike) game.

Unlike in Destiny or Halo or any other game with big moody cyborg energy, Disintegration doesn’t toss you into boots-on-the-ground skirmishes against tenacious sci-fi foes.

Don’t get me wrong: There are plenty of enemies to shoot, but your boots just aren’t on the ground. Instead, you pilot a hover bike above the action while simultaneously issuing commands to a small squad of NPC units who fight alongside you. In the 5v5 multiplayer mode I tried, players”each with hover bikes and robo-armies of their own ” squabbled and skirmished over the energy cores that they needed to deliver to a drop-off point.

I’ll admit that I was initially surprised and a little disoriented after coming in expecting something more traditional. During my first match, I felt awkward hovering above an arena my brain told me I should’ve been running around in. The bike itself, meanwhile, felt floaty ” both in the sense that it, you know, floated and in that it had a slippery sort of momentum to its movements.

The ensuing battles were chaotic. Players fired on other players and squads alike, while squads dutifully followed suit. The action was hard to read sometimes, with flashy effects and plentiful units throwing up static that interfered with my split-second decision making. I’d find myself frantically flicking between abilities and targets, only to suddenly get shot down because while my grav cycle was in the thick of things, my head was in the clouds.

It took a change in my frame of mind to right the course. While Disintegration might share some visual motifs with Destiny and, to a lesser extent, Halo, Lehto told me that it began life as a spiritual successor to Bungie’s “˜90s real-time strategy series Myth.

Lehto and his team decided, however, that they didn’t want to get lost in the shuffle of a genre that is enormous and legacied, but also no longer in vogue. Thus, the shooter elements and hover bikes. 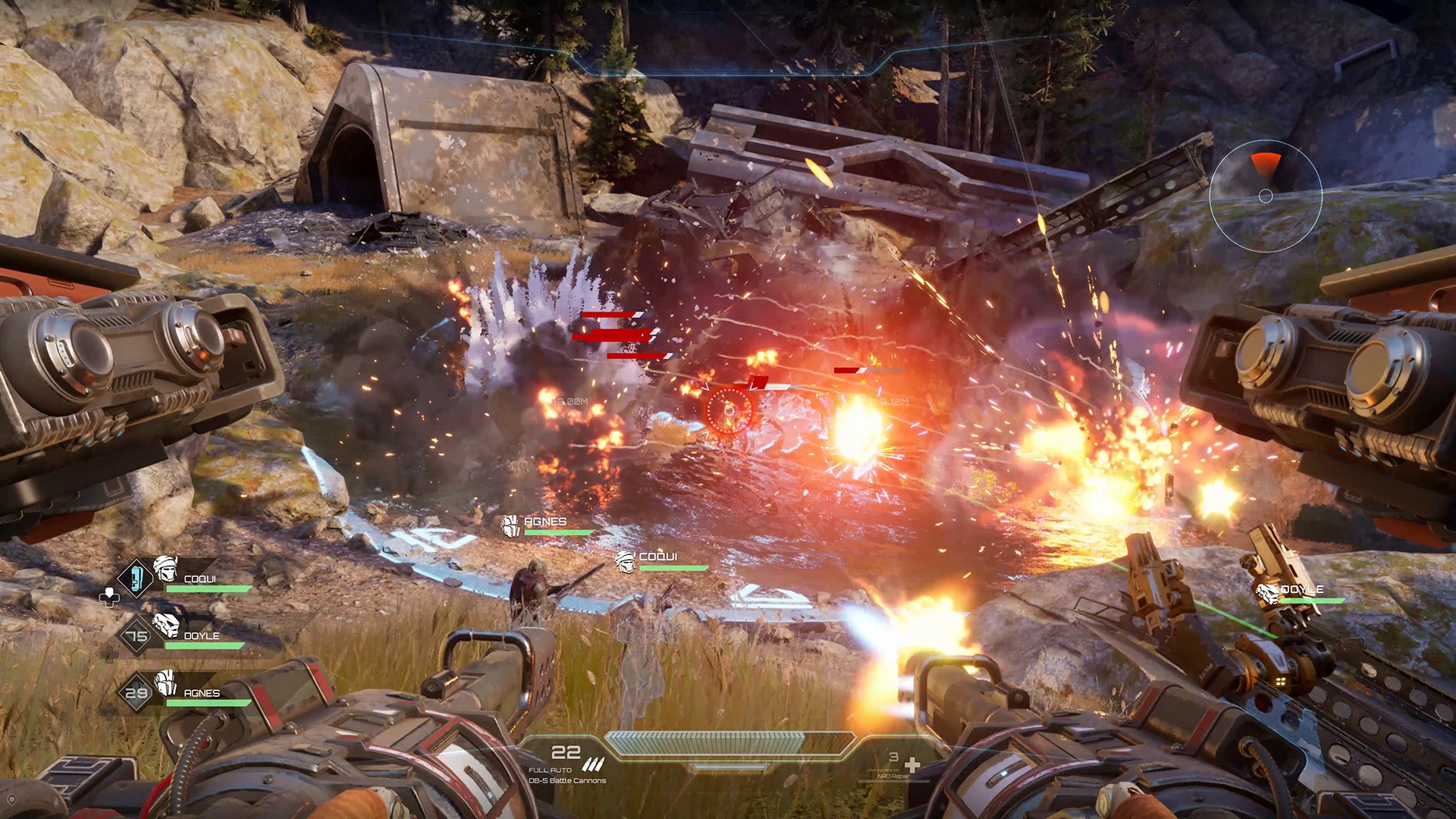 But while you’re bobbing war-fully over Disintegration‘s dilapidated battlefields, it still helps to think like you’re playing an RTS. You don’t need to be in the thick of the action to be effective. With a simple press of a button, your squad will go where you command it and contextually decide whether to move, grab an objective, or mount a full-on assault on a particular target.

Each squad and bike is also linked to a different faction, granting you different stats and special abilities based on who you choose. I liked the group of robots who dressed like medieval knights. My bike could hurl ballista-like spear blasts at people. That was fun. The rest was about picking my battles and doing in other people’s squads before they could melt mine. I never felt fully comfortable with the game, but during my second match, I felt far more in control than during my first.

It turns out that genre-mashing multiplayer antics are just the tip of Disintegration‘s iceberg. It’s also going to have a single-player campaign about human beings surviving in robot bodies after environmental and technological cataclysms have ravaged the planet.

The player characters are trying to win their human bodies back from a militantly transhumanist faction, and you and your buddies aren’t super soldiers. Despite their meticulously engineered mechanical bodies, your ranks are made up of teachers, journalists, mechanics and other regular folks who just want to live regular lives, Lehto said. That seems like it could make for some very interesting story and character dynamics. 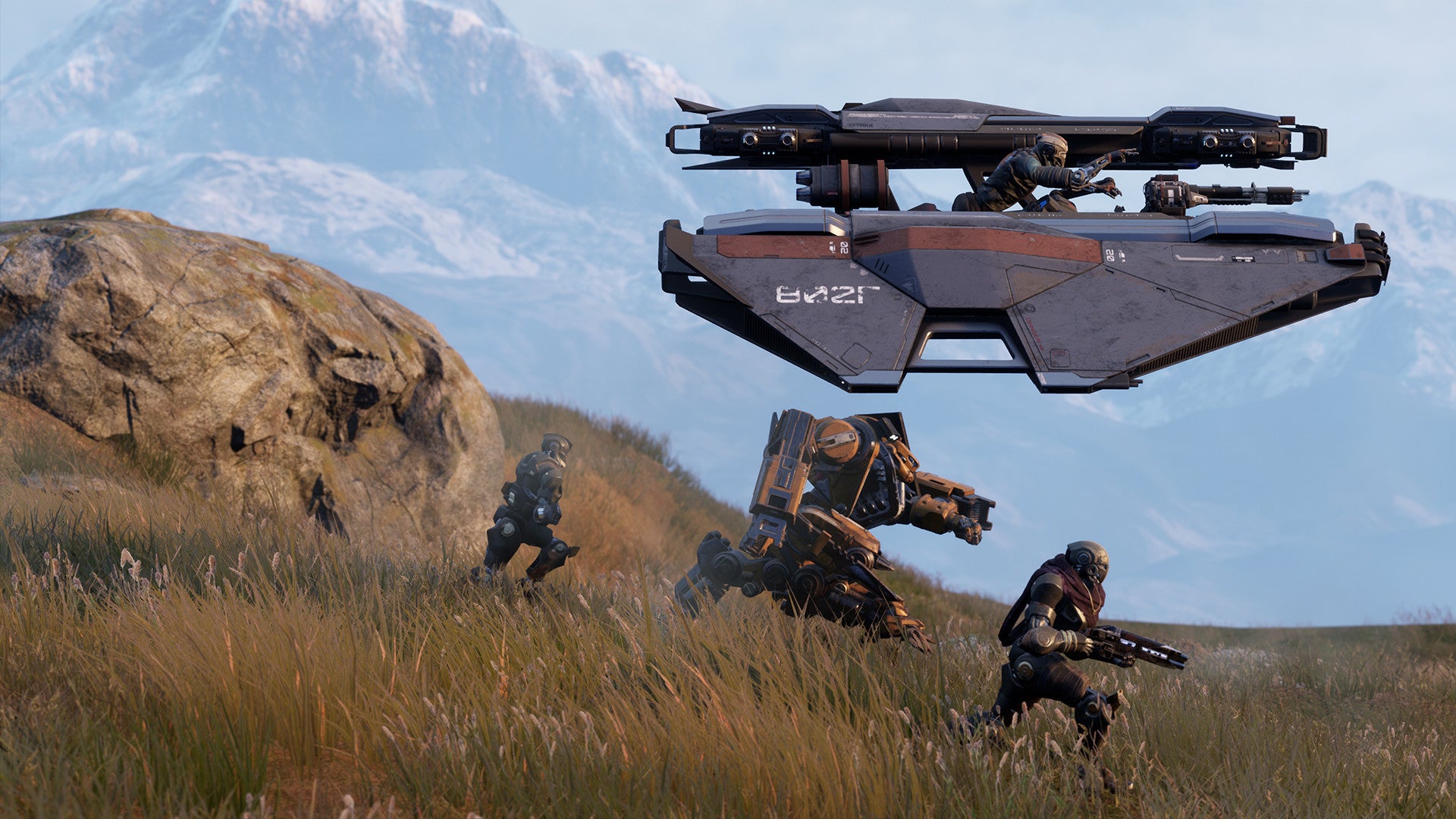 But there’s still the elephant in the room: visually, the game kinda looks like Destiny in places ” when it comes to character design, if nothing else. Why cover such a unique game in what could be perceived as somebody else’s coat of paint? Lehto replied to that question by saying that what we think of as Destiny style is really Lehto style.

“It’s a fair comparison to make, especially when you consider the fact that I was one of the core individuals developing the entire aesthetic style of Halo and a good bit of Destiny at the very beginning,” he said. “That’s my style, that’s my blueprint. It’s like what you’d expect from any good director: a certain kind of vibe from the movie that you’re gonna go see. The same thing is true with games. The kind of game I’m making is the kind of game I like making.”

People, however, aren’t necessarily going to know all of that history upfront. Still, Lehto isn’t bothered by the comparisons.

“It’s fine,” he said. “I expect it, first of all. I think our game also has more of a honed-in aesthetic as far as the type of characters. When you look at them side by side, they’re extremely different. There are limited exact similarities between the two. Like, yeah, they have a robot. We have lots and lots of robots. Lots of games have robots.”Â