DOTA 2 Cheats Are Getting Their Arses Banned Until 2038 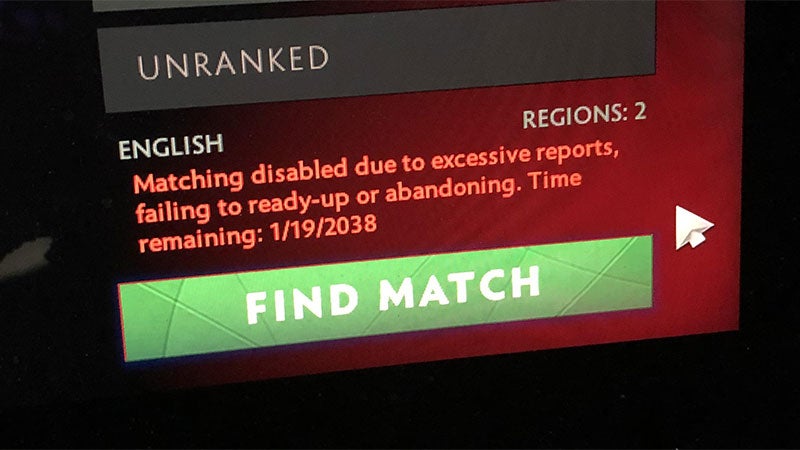 Valve released a matchmaking update for DOTA 2 Wednesday, and as part of that some players breaking the rules have begun receiving comically long bans.

Valve’s notice for the update says it’s targeting “bad actors”, aka those with “exceptionally low behaviour scores”, anyone buying or selling Steam accounts to get a higher rank, players “using exploits to gain an advantage over other players” and smurf accounts.

Which is fine, that’s how online ban waves always work, but some of the bans being handed out in this case are huge. Like our guy YeezyReseller, who woke up to find his account banned for 19 years, or zatlant here who asked the community why he was also banned for the same amount of time, and quickly received a response (he had quit over 60 per cent of his games).

The idea of a 19-year ban for a video game is absolutely hilarious to me, but doubly so when you see the end date is 2038. That’s the future.

Like these guys will be living in a climate-ravaged hellhole, sweating in their 100-to-a-room underground living pods, working their 40s away in an AmazonDisney Corp bitcoin mine, and in January 2038 they’ll get a calendar reminder that they can now play DOTA 2 again.

For a second their hearts will race, until they remember DOTA 2 was kicked through the Moon Door by Chancellor Barron Trump in 2037, and they’ll trudge back into the mines, remembering the good old days, when their racist jokes over video game chat were just that, jokes man, lighten up.