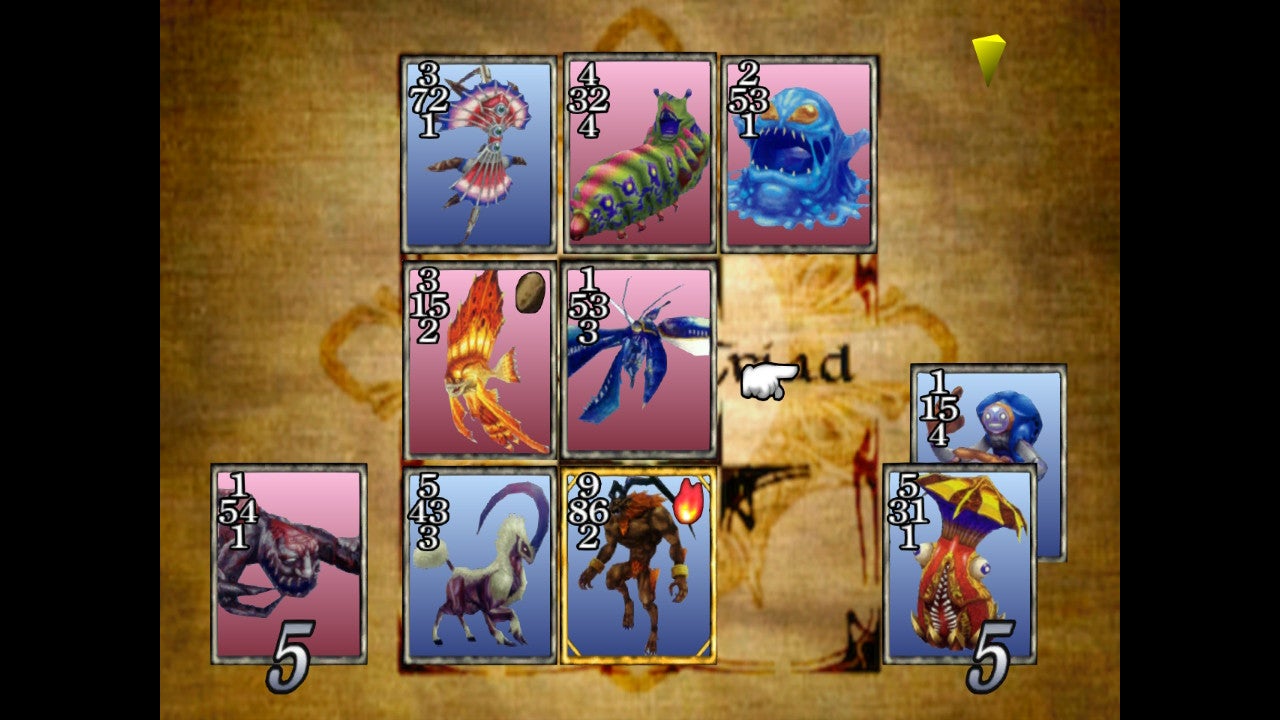 Final Fantasy VIII Remastered is finally here, which means I can continue my long and storied history of never actually finishing Final Fantasy VIII because I am too busy playing Triple Triad. It’s a whole thing: I get a copy of Final Fantasy VIII, immediately start playing the in-game card game more than anything else, and then tragedy strikes. My disc gets scratched, or my save file is lost, or I need to clear hard drive space, or one of hundreds of other games demand my attention. Nevertheless, I love Triple Triad, and it’s a big reason I’m into card games in the first place.

Triple Triad is a card game you can play in Final Fantasy VIII that’s kind of like dominoes. Each player assembles a hand of five cards to use for the entire game and takes turns placing them on a 3×3 grid. Every card has four numbers from 0-9, one for each edge of the card. You want to place cards so their values are higher than they cards they’re played next to, causing opponents’ cards to be flipped while protecting your own cards. It’s extremely simple, and extremely satisfying.

But Final Fantasy VIII also makes Triple Triad incredibly rewarding to play not just because it’s a good in-game diversion but by seamlessly integrating it into the game’s world. Just about everyone in Final Fantasy VIII plays Triple Triad. The game has a button dedicated to asking other characters if they want to play, and most of them say yes.

Each region of the game world has its own rules variants, so playing in Balamb, where the game starts, is slightly different than playing in places you visit later on. Regional house rules in a fictional card game are the sort of thing that makes a world feel alive and worth spending time in. There are side quests that stem from playing Triple Triad, and unrelated side quest goals can be achieved through playing Triple Triad. It gives the world texture.

Card games’ design constraints are compelling — small rectangles with one side only you can see, and one side everyone else can see. You can only fit so much information on a card, and you can fit even less when you try to make the card itself nice to look at, with beautiful art.

How card games solve for these constraints fascinates me. When digital card games like Triple Triad replicate physical card games successfully despite missing out on some of their primary appeals — their wonderful tactility, the satisfaction that comes with amassing a collection or admiring a well-constructed hand or deck — I feel a rush.

I love deck-building video games lots — and deck-building tabletop games too — but I wouldn’t have even tried them before Triple Triad showed me how fun they could be, how easy to slip into and suddenly become obsessive over. I never got into Magic: The Gathering or any of the fad collectible card games that spread in my youth, so for a long time card games for me were just limited to the kind of games you could play with a regular poker deck.

Final Fantasy VIII changed that. Even though I still, hilariously, have not finished it (I hope to someday soon) it still managed to make my world a little bit bigger, richer, and more varied. Now I love card games of all stripes, and can’t get enough of them.