Gun Gun Pixies for the Nintendo Switch and PC is a third-person shooter-platformer about a pair of miniature aliens learning about human behaviour by infiltrating a women’s dorm. It’s silly. It’s racy. There are panty shots galore and lots of censored anime nudity. I expected as much from the latest PQube release. What I did not expect was that the game would kick off with a cautionary tale about excessive dieting.

Before we begin, know that there will be not safe for work screenshots in this post. No outright nudity, but plenty of implied nudity and seemingly sexual situations.

Gun Gun Pixies opens with one of the game’s two main characters, diminutive female warriors from a far off alien planet, standing in front of a massive human woman lying on the floor in her underwear. The pixie, pink-haired Bee-Tan, must use her gun to fire happy bullets at the human, causing a spike in endorphins that sort of resembles a sexual climax. The game’s tone is set within the first couple of minutes. Or is it? 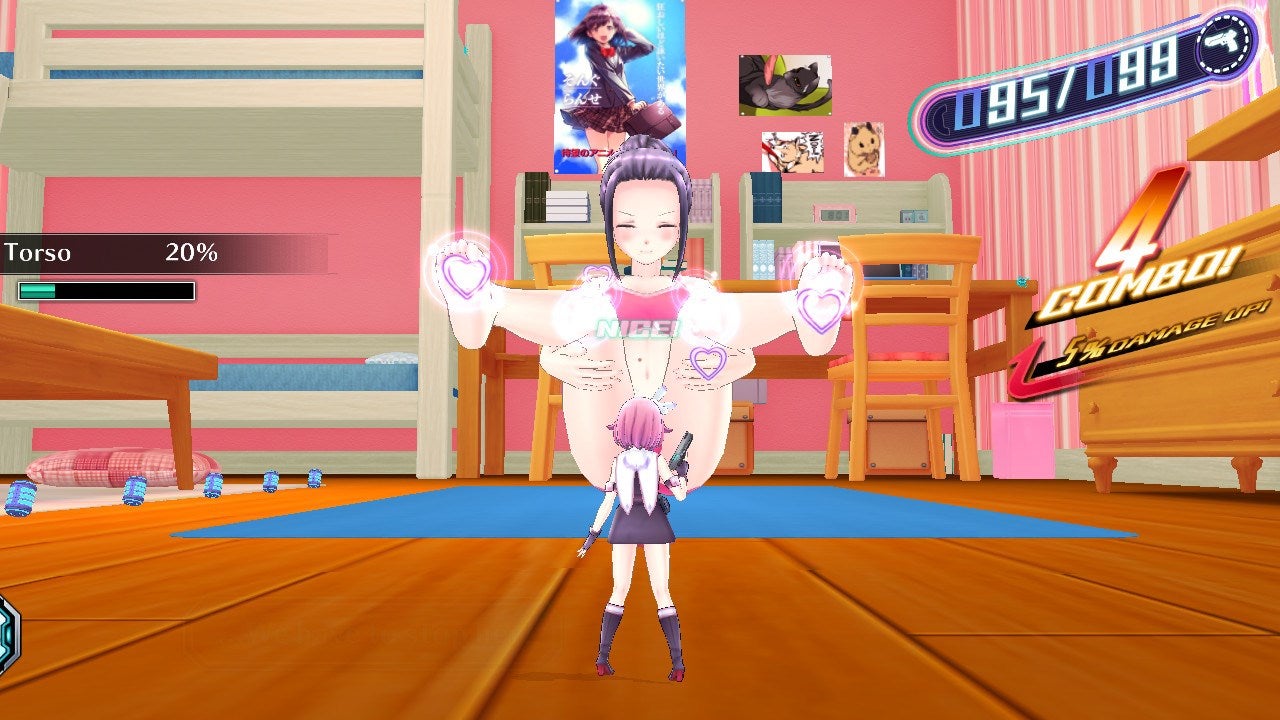 OK, yeah, but it’s more than that. What seems like a racy scene is actually a small alien warrior attempting to snap a human woman out of a potentially harmful manic episode. 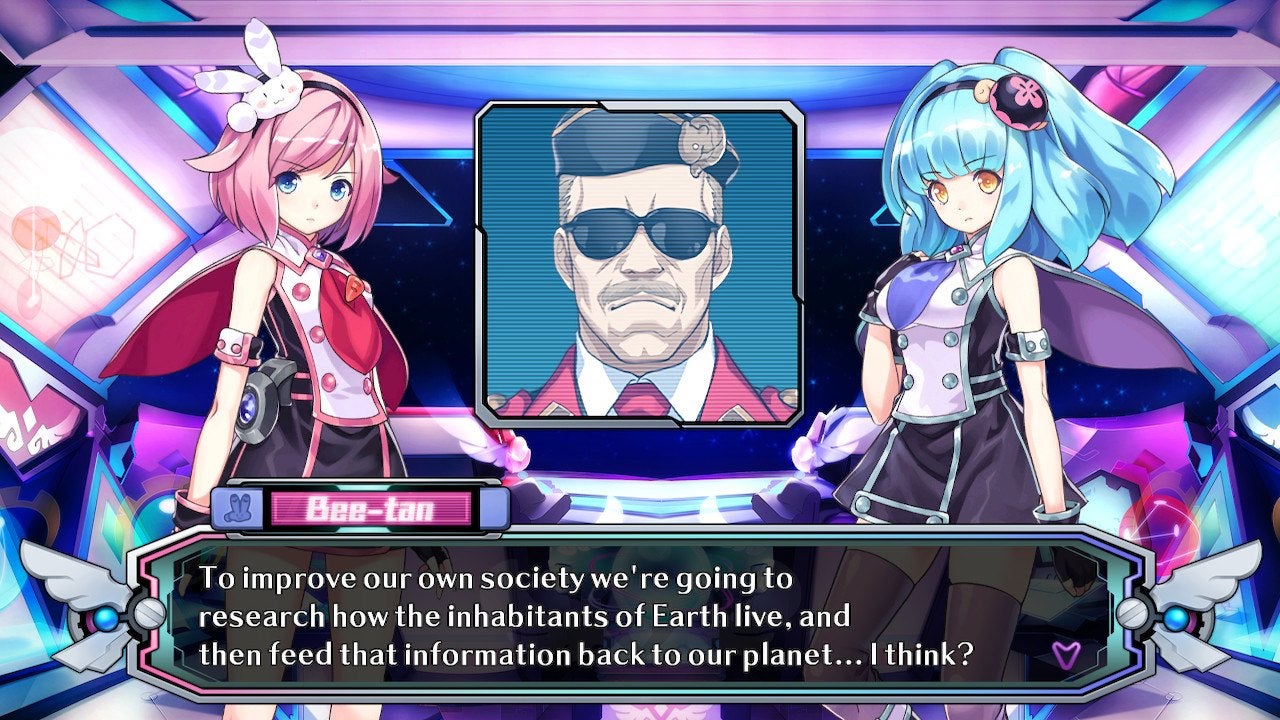 Gun Gun Pixies is also the story of the inhabitants of the dorm. We meet sisters Misa and Kira Torii and their friend Amayo Sato, a trio of students living together in the pixies’ new base of operations. While the small aliens’ mission is to merely observe the women, the mischievous Bee-tan can’t help but get mixed up in the drama of their lives.

The game’s first mission begins with a strange, sickly-sweet smell permeating the dorm. None of the three human inhabitants seem to know where the smell comes from, but it’s really bothersome. The pixies decide to investigate. 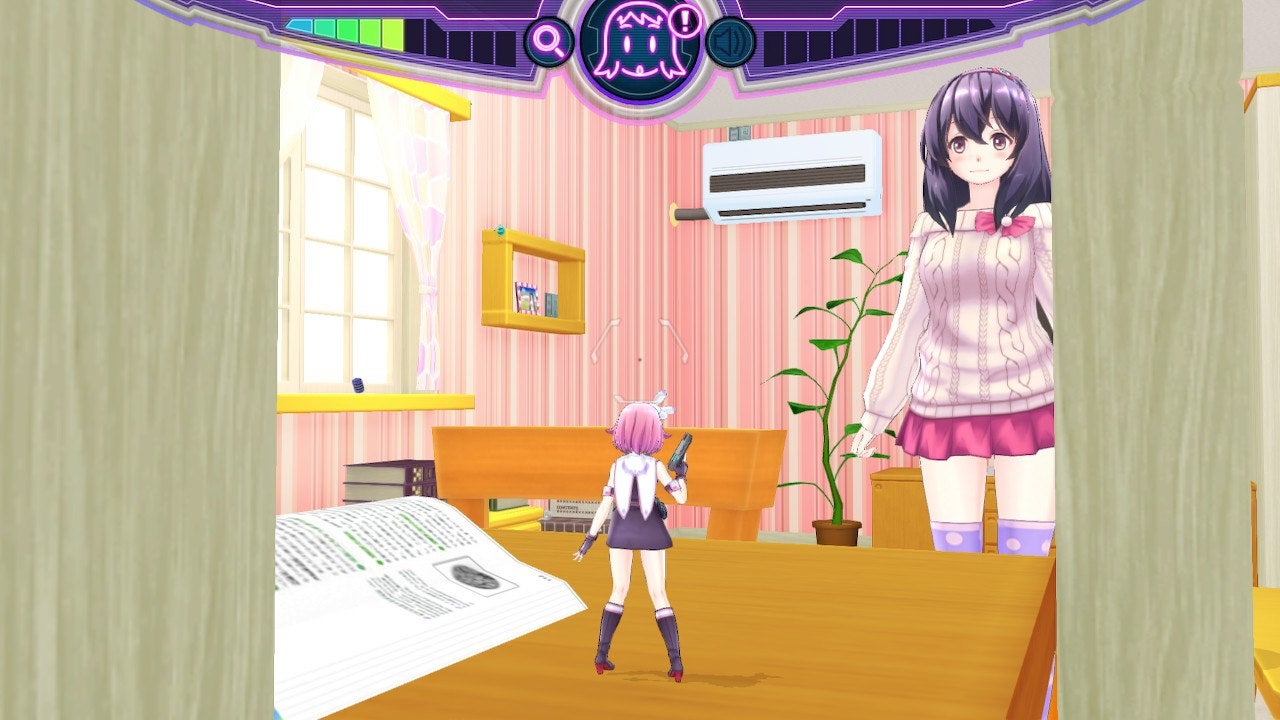 Investigating involves picking one of the women’s rooms to reconnoiter. Whichever pixie the player picks wanders about these super-sized playfields, using their scope to search for secrets. There are coins to collect and all sorts of nifty little platforming challenges to overcome. And should exploring fail to yield the necessary information, the pixies load up their weapons with happy bullets and fire.

When aimed at humans, happy bullets raise endorphin levels and lower inhibitions. In normal missions, humans have three zones — lower body, upper body and head. When a pixie soldier hits a human enough times in any zone, it triggers a visual novel style cutscene in which some pertinent info is imparted. At the top of the screen, a pair of meters measure sound and sight. If a pixie makes too much noise or stays in a human’s field of vision for too long, that’s a “mission failed.”

While searching one of the Torii sisters’ rooms, we discover a trash can filled with wrappers for diet gum. Shooting the sister enough times triggers a scene in which we learn that her friend, Amayo Sato, had been in the room cleaning. Hopping over to Amayo’s room, the pixies find her trash can filled to the brim with wrappers. Worried about her weight, Amayo has stopped eating altogether, subsisting on diet gum alone. That’s not good. The pixies take the news seriously. 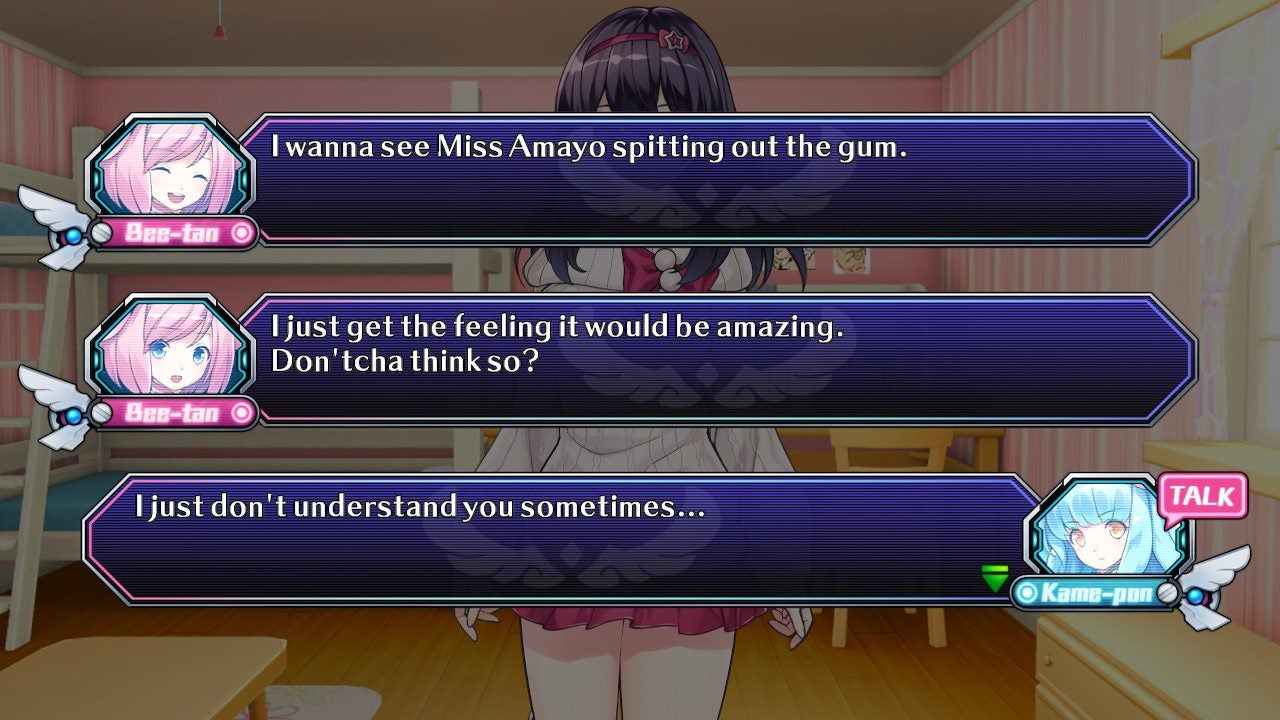 Eventually, the pixies take the news very seriously. Ignoring the non-intervention portion of her orders, Bee-tan and a reluctant Kame-pon leave one of the wrappers where Kira Torii will find it. Not only does this reveal the source of the sweet smell, it helps Kira discover that her friend has a problem. 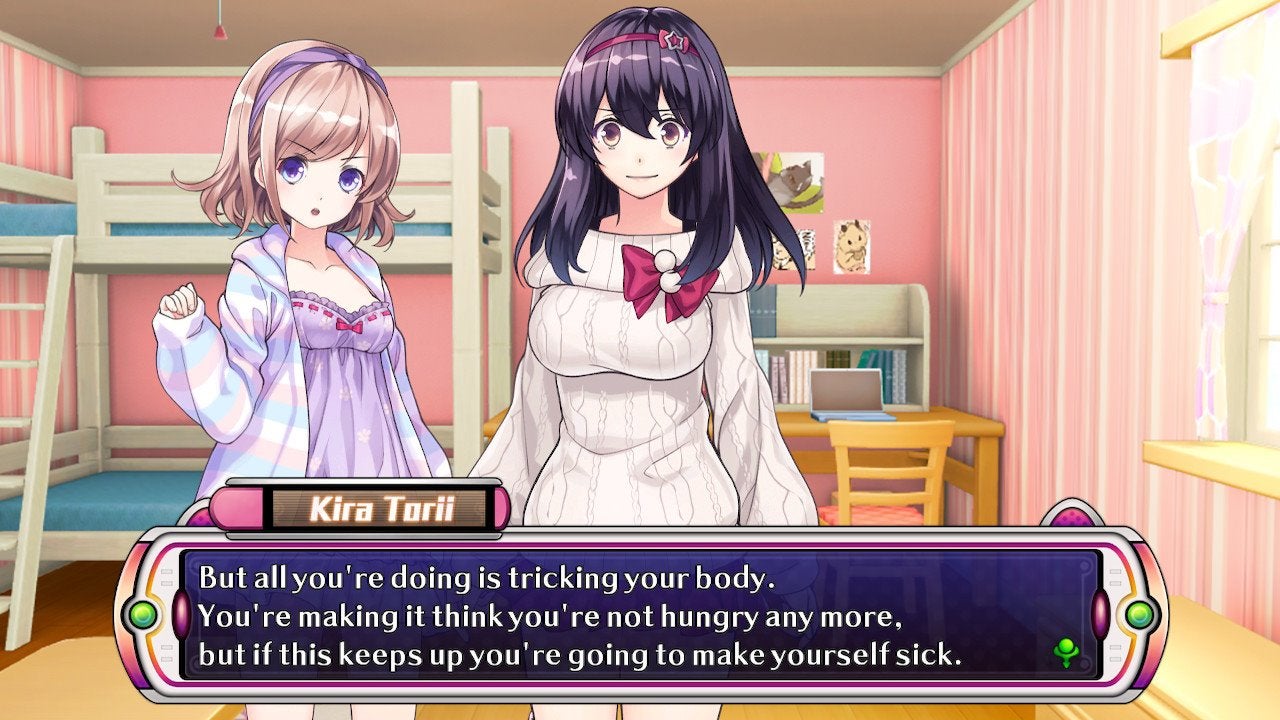 Kira confronts Amayo about her diet gum addiction. She explains the dangers of the habit to her friend and tries to convince her that her health is more important than her body image. At first it seems to work, but then Amayo freaks out. 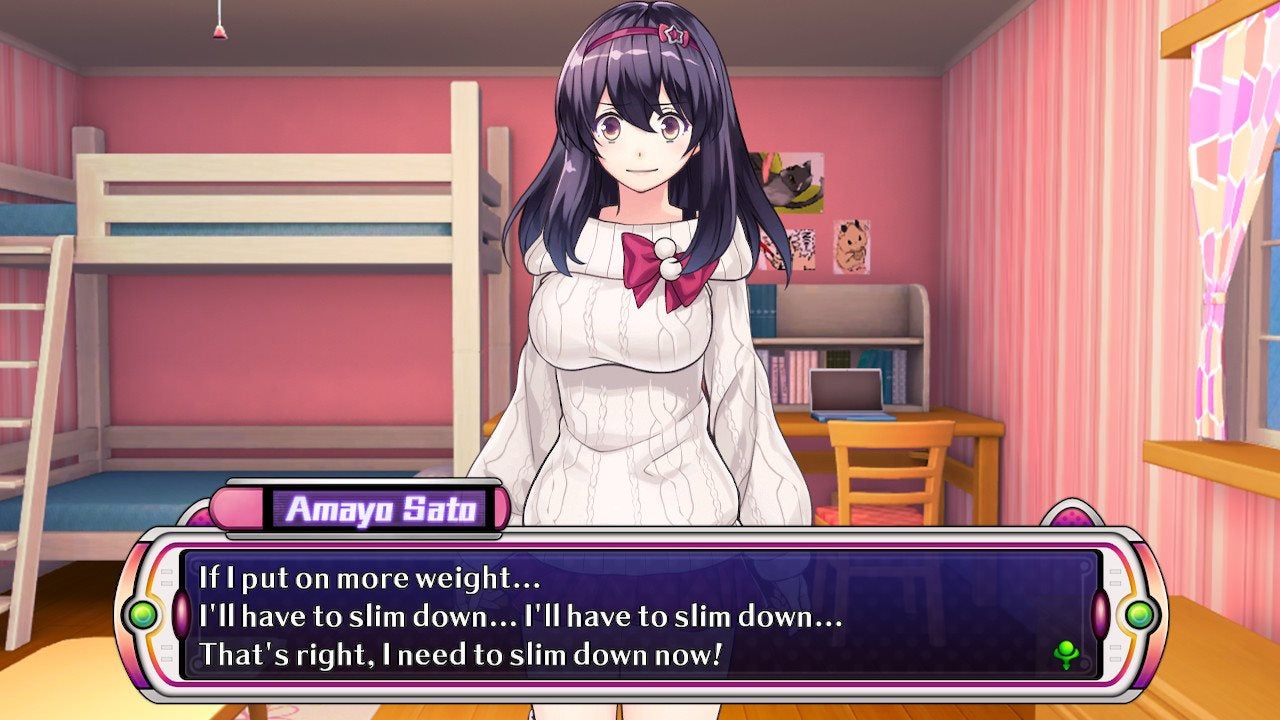 Which leads us back to the game’s opening. Amayo, convinced she must exercise before she can eat or she’ll grow overweight, dons her yoga gear and begins to furiously work out. It’s up to Bee-tan and Kame-pon to use their happy bullets to put an end to the episode.

With Amayo in a manic state, the pixies don’t have to worry about making noise or being seen. They just have to avoid or shoot the emotions, good and bad, overflowing from the human. Should they get hit, they lose some of their clothing, because that’s the sort of game this is. But what’s a little censored nudity when a woman’s life is at stake?

It’s really not. The upskirts never end. Bee-tan can’t go five seconds without becoming overwhelmed by her thirst for human women, her partner, chewing gum, furniture, or anything else that crosses her field of vision. And the reward for calming down Amayo completely? It’s a bathing scene. 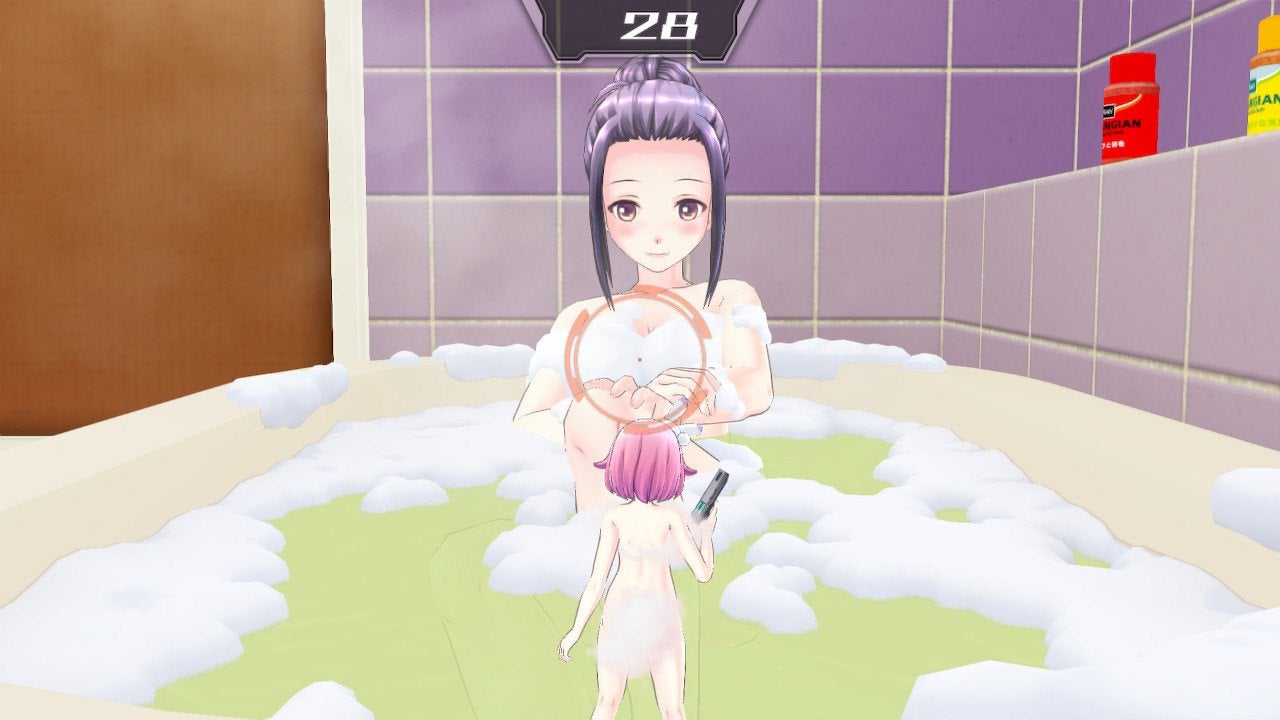 Gun Gun Pixies is a game that doesn’t try to hide what it is. Japanese developer Compile Heart excels at putting together quirky, pervy adventures like this. I love a game that lets me play as a little person in a big world. If that world includes a bathtub filled with a barely covered human and suspiciously green water, so be it. I was pleasantly surprised to some responsible realism in my sexy pixie shooting sim. 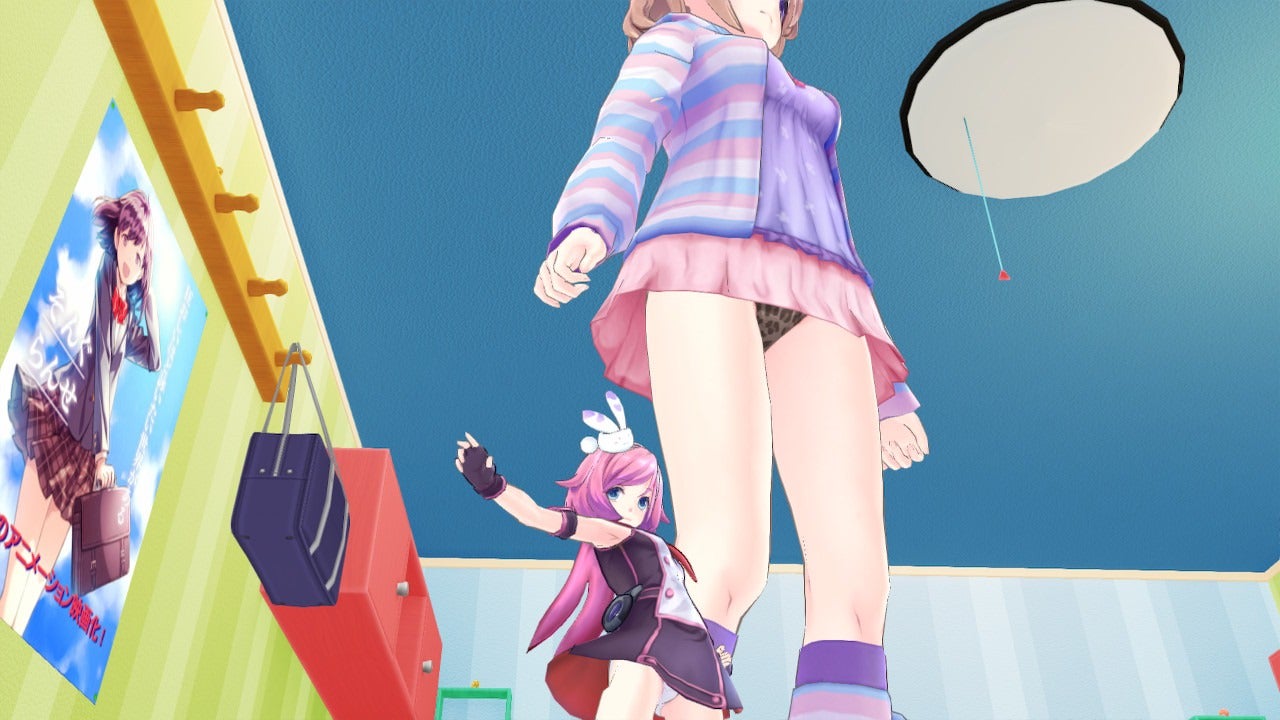 If only a little.

Gun Gun Pixies is out now.