New form factors are always exciting, but nothing else in recent years has captured people's imaginations quite like foldable screens.

When it comes to the Galaxy Fold, drama has ensued. From its micro-debut at Samsung's Developer Conference in 2018, to faulty review units, there have been many question marks around how it would eventually perform.

And while some may have even assumed that the first generation of the Fold would become Vapourware, it made a surprise appearance at IFA 2019. And we got to spend 45 glorious minutes with it. 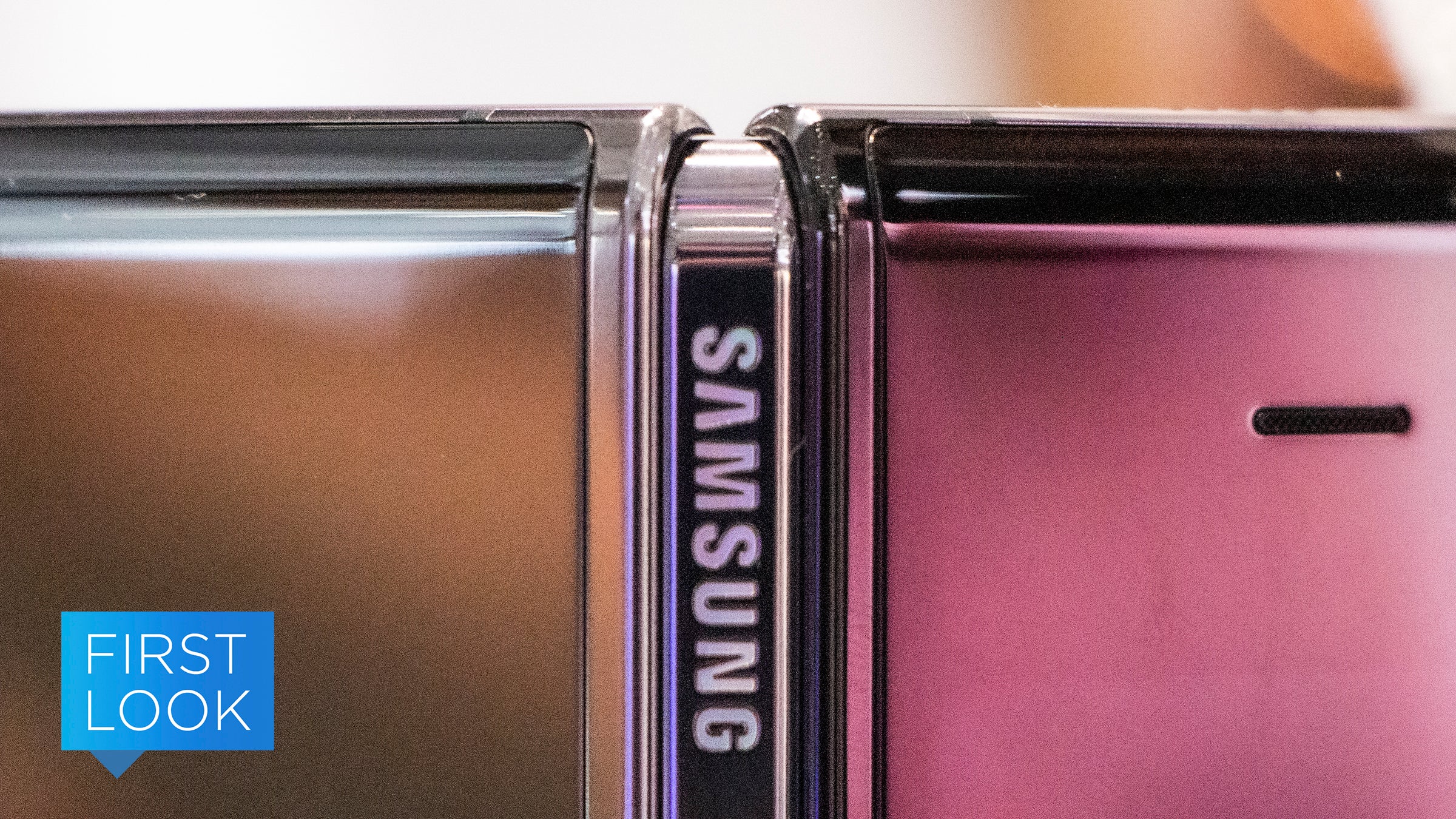 Can You Spot The Upgrades On The New Samsung Galaxy Fold?

Look closely. That’s a closeup of the new Galaxy Fold, taken at Samsung’s sprawling space at IFA in Berlin. One of the apparently major design upgrades is staring you right in the face. Do you see it?

To set the scene, we tried the Galaxy Fold both behind closed doors and briefly on the show floor at IFA this week.

Ask and you shall receive.

When Samsung announced the new release date of the Fold earlier this week, the company stated:

"During the past several months, Samsung has been refining the Galaxy Fold to ensure it delivers the best possible experience. Not only we improved the Galaxy Fold’s design and construction, but also took the time to rethink the entire consumer journey."

It doesn't seem like there have been any changes to the software, but there are two distinct hardware upgrades to the new Fold.

The first is a T-shaped clip at the base of the fold, which prevents people from peeling off the protective film.

If you'll recall, this was one of the major issues reported by reviewers, some of whom tore this off due to mistakenly thinking it was a regular screen protector, as opposed to a fundamental part of the design.

The other issue was dust, which was able to slip into the device due to a gap near the hinge, which subsequently shortened some devices out.

This space has now been significantly reduced.

What's Good About It?

Anyone with a two-monitor setup will know how productive it is for work. More importantly, you'll be aware of how deeply satisfying it is to watch stuff on one screen while browsing the internet on the other.

The Fold does a darn good job of doing the same thing, but on a single screen... which is in the palm of your hand.

The Fold is capable of having several apps open simultaneously. I found two to be best in terms of usability and eye comfort, but three was also okay.

I was especially fond of having YouTube play on one side of the device, while browsing the web with the other. Fortunately for you, a story about sex tech (with an amazing header gif) was at the top of the website while I filmed. You're welcome.

The camera is pretty good

One of the key advantages that Huawei's Mate X has over the Galaxy Fold is the camera. It's been blessed with the same setup as the P30 Pro, which is one of the best phone cameras of the year.

But while the Fold may have an inferior camera, its still pretty darn good. It has the same hardware as the S10 range, which is up there in terms of quality.

I only got the chance to take a few snaps, none of which were in a picturesque environment, but they were still good.

In the settings you can choose which apps you want to continue running on the front screen. This means that once you fold the device up the app will continue over.

I found that this process was quick and painless - though it is worth noting that the apps won't appear as full screen which may irk some people.

Another potential niggle is that all new apps have closed screen continuation switched off by default.

Every time you download a new app you will need to toggle it on if you want it to work with this continuity. There's currently no option to have all apps toggled on by default.

Rotating the open device also result in a quick justification change, and all apps and media looked great and continued flawlessly.

One last thing that may annoy some people - if you try ad make a phone call with the device unfolded it will automatically use the loud speaker.

If you want to use it as a regular phone you need to fold the device up, as the speaker is on the outside of the device.

I avoid phone calls at all costs, such its not an issue for me, but it could be for some.

One of the commonalities between myself and the other tech journalists in the room (besides our jobs) was the childlike wonderment we exhibited while playing with the Fold.

Not only is it an exciting new device, it's plain fun to use. The simple act of opening and shutting it is an utter delight.

Similarly, taking photos of the screen when it was ever-so-slightly folded never got old.

Yes, it's a solid device that seems to be behaving itself this time around. But its also a fun gadget, and that in itself is worth celebrating.

What's Not So Good?

You can feel the crease

When using the device unfolded you can absolutely feel the crease. The bump is a little distracting and not the nicest feeling on what is a premium and expensive product.

However, I also tried Huawei's Mate X foldable this week, and the crease was far more pronounced.

It's also something that is forgivable on a first gen product where the form factor is entirely new.

I imagine that as the technology evolves the creases will be... ironed out.

Sorry, it had to be done.

We're living in a time when phone manufacturer's are trying to make phones as thin as possible.

Foldables are by definition the opposite of this. The very action they're named after doubles their thickness, leaving you with a phone that is reminiscent of the early 2000s.

At just over 17mm thick, the Galaxy Fold certainly sticks out. Even literally if you've popped it in your pocket.

Of course, this isn't an issue unique to the Fold. The Mate X suffers from the same condition, as will any other foldable phone that comes to market in the foreseeable future.

It's not a deal breaker, but its a tad annoying when you've become so accustomed to sleek, thin convenience.

Much like the Royole Flexpai foldable I tried at CES in January, I felt morally obliged to slide the Galaxy Fold into my back pocket - both folded and unfolded.

This resulted in a reaction from the Samsung team, who seem worried about breakages and scratches.

This isn't surprising considering the issues the first models had, and the fact that its a plastic screen - as opposed to something like Gorilla glass.

However, the mild panic did seem to indicate that these things are somewhat on the delicate side, so I wouldn't be surprised if screen scratches will be common once they're out in the wild.

The Galaxy Fold went on sale in Korea this week, and other markets will soon follow. We don't have a date for Australia yet, but you can expect it to appear well before Christmas.

Pricing hasn't been confirmed for us either, but it's probably going to be hovering around the $3,000 mark.

With all of that in mind (plus the fact that its a first gen product), it should be difficult to recommend the Fold.

But despite spending so little time with it, I really couldn't blame anyone for wanting one. It's exciting, fun and works great.

That being said, holding off until the next generation isn't a bad idea either - especially if you need to buy on a plan.

We can expect the next Fold to launch without the huge flaws that it had earlier this year. Plus, some of the finer issues will probably be dealt with.

Still, you'll have no judgement here if you decide you need one now and have the cash to spare. This is a safe tech space and we get it.

I for one can't wait to spend more time with it.