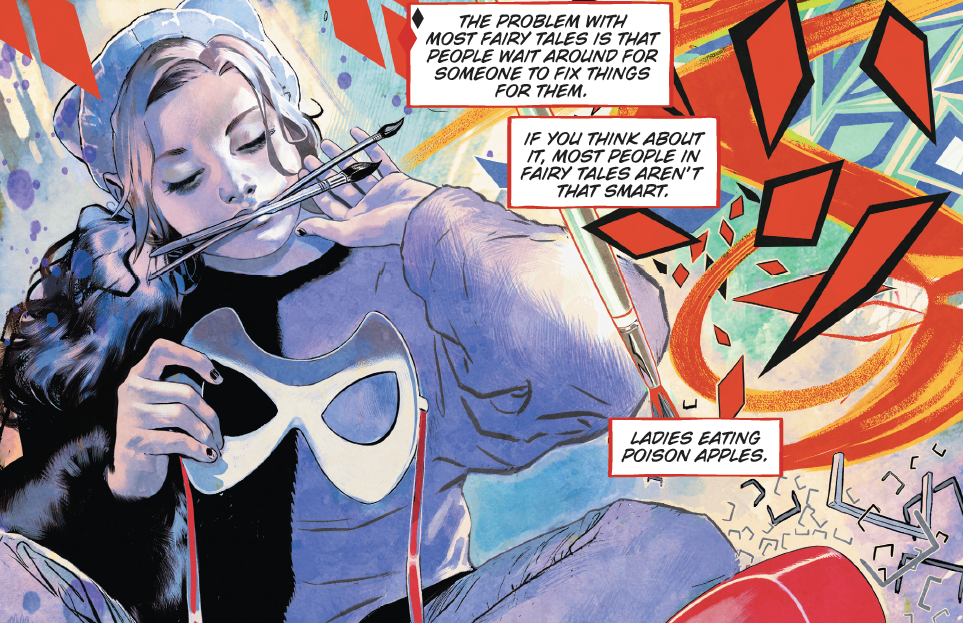 Though Batman, Wonder Woman and Superman would never admit it publicly, Harley Quinn is arguably one of the most important characters in DC’s comics, film, and television worlds because of the way she lends herself to a wide variety of reimaginations and deconstructions. More than that, though, Harley’s always been a fascinating character who ends up drawing your attention because of the chaotic, exciting energy she brings.

When I spoke with writer Mariko Tamaki and artist Steve Pugh, the creative team behind DC Comics’ upcoming young adults graphic novel Harley Quinn: Breaking Glass, they explained how easy and natural it felt to create a new take on the character once they established a few baseline ideas about which parts of her original depiction should be carried over.

Because once you nail down those core elements, everything else that’s added only ends up making you realise how dynamic the character’s always been, and how much more potential there is to mine from her stories.

Pulliam-Moore: Who is this Harley Quinn? You can see so much of classic Harley in her, but there’s also something that feels distinct about her — it’s not just that she’s young, she’s got this interesting new background.

Mariko Tamaki: We really wanted to make sure that this Harley Quinn was a teenager. Like most heroes, she’s had a rough go of life at the start. She lost her dad when she was younger and she has a single mum who’s kind of struggled to get by at various points in her life. But really the key element to this Harley is that she’s got this incredibly resolute sense of right and wrong, ultimately.

Tamaki: If she sees you doing something that she thinks is unfair, she’s prone to responding the way Harley in Injustice would. She’ll take anybody out that she thinks needs to be taken out at any given moment and she doesn’t see it as anything other than being fair.

She sees it as if she’s weighed the scales, made a decision, and feels fundamentally good about the things she does. Even though she doesn’t own many things, she has what she needs to get by, and she figures things out. She’s never too bent out of shape about anything, and prefers to deal with things as they come at her.

When we meet her here, she’s been brought into this new environment where she’s got to get herself started again, which is something she’s done a lot. She’s used to it, but we’re meeting her at the beginning of one of the many beginnings of her life.

Pulliam-Moore: You really lean into the spacier side of Harley’s personality and in the book, but it’s clear that she’s speaking authentically, and in a really clear-minded way that people just don’t understand. Talk to me how you went about finding that voice for Harley.

Tamaki: I really like the idea of Harley being someone who marches to the beat of her own drum, but I wanted to think about what that means exactly for her. She figures things out in a very Harley way, and I pictured that she spent a lot of time by herself growing up and that led to her really having to develop her own own compact worldview in order to survive.

It has all these composite parts which are very confusing to other people, but she’s not bothered by that, you know? It was really fun to write a character who is so completely at ease with her own weirdness, and not even see herself as being odd. She’s just like “Oh, this is how I see things. This is what I need and this is what I feel. And if you steal something from my mum, I’m gonna come and get you because nobody else is gonna do it.”

Pulliam-Moore: Even though that vibrance in Harley you’re talking about puts so many people off, it’s what makes Mama so willing to welcome her into his family, and what draws Ivy and the Joker to her as the story progresses, I think. Was your intention always to make Harley, kind of like an emotional lightning rod for the book’s other characters?

Tamaki: The idea was to create a sort of triad of characters. Harley’s in the middle because she’s intensely empathetic to other people and she bonds with and becomes loyal to people very quickly. If you’re her friend, she’s your friend for life and she’s just gonna look after you.

Then you have Ivy, who is very socially conscious and very community-minded person who’s very connected to the bigger picture of things. And then you have the Joker, who’s chaos. The three of them together kind of create, to me, like an interesting reflection on different kinds of justice. 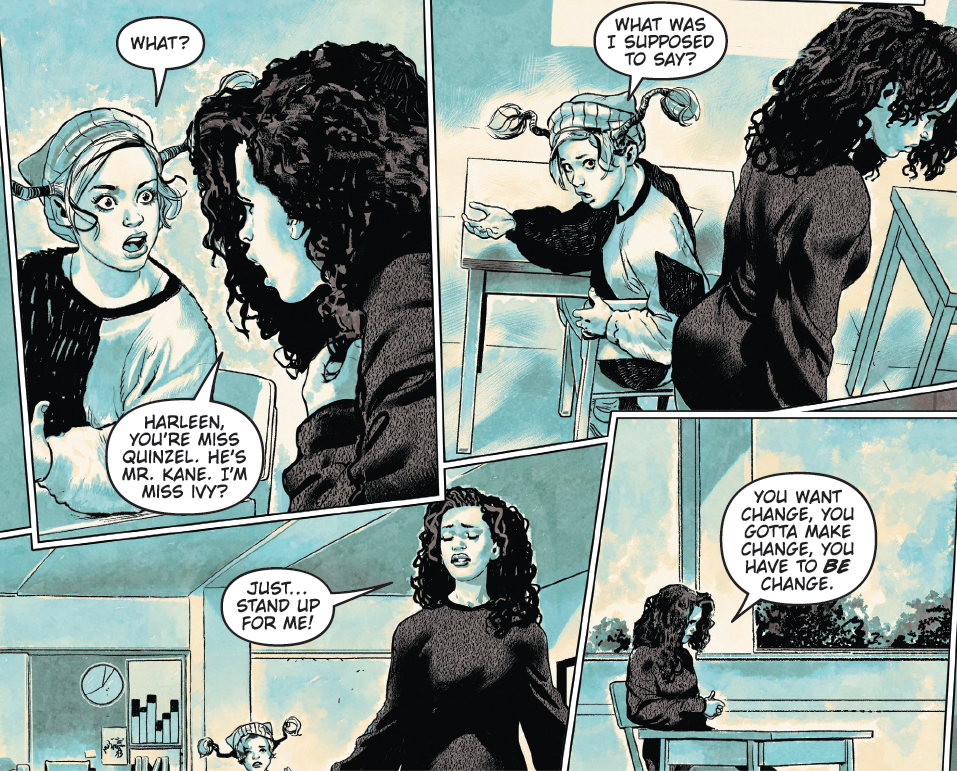 Ivy pointing out how Harley doesn’t experience the same kind of radicalized microaggressions she does. (Image: Steve Pugh, DC Comics)

Pulliam-Moore: Steve, there an undeniable effervescence to Harley’s personality that you totally capture in your illustrations, but the book as a whole has this very intense almost noir vibe to it that really highlights how distinct Harley’s way of moving through the world is. Talk to me about how you settled on an aesthetic for this particular story.

Steve Pugh: Gotham became quite a big part of the book for that, for the look of it. I’ve never lived in America but obviously I’ve been steeped in that culture since I’ve had a television. A lot of the area that this is set in was very similar to the place where I grew up, in a small place in Birmingham.

That’s a lot of small locally owned shops a lot of characters who were just trying to get by, hustling, and keeping things moving. People who had trouble with being forced out of the city because of their rents being raised.

In terms of the characters themselves, I took a lot of cues from Mariko’s dialogues almost entirely because she really paints a perfect picture of a human being. You read the dialogue, and it’s like a movie—you see the characters, honestly.

Pulliam-Moore: It’s interesting you say that because yeah, reading the dialogue, these characters immediately read as versions of people that you know, but you’ve also brought this wildly different style to everyone that sets them apart from their classic comics counterparts.

Pugh: Definitely. These key to reimagining characters, but making them “read” correctly is finding those distinct anchors, and Mariko emphasises a lot of them. Take the Joker. The purple suit was in the script and I think it’s an important visual anchor.

I think it’s very important — and we learned from The Flintstones — that if you’re going to call these people the same name, then you should acknowledge the source material in order to understand where the character’s coming from. But that doesn’t mean just replicating what we’ve seen before. There’s a certain shape to the Joker. There’s a certain theatrical self-obsession that kind of defines his body language. But I also like throwing some random stuff that feels very Joker-y, like he does just like the Nixon two-finger point as he’s making his exit.

Pulliam-Moore: You’re turning his personality into physicality, then.

Pugh: The look of him was kind of defined by who he was in this story. Mariko described him as a creature of media. He’s a construct who’s put himself together. The plastic bag is… it’s sort of like the commercialism and corporate-ness and the cutouts for his eyes, which change every time you see him, are meant to be a ransom note. His entire face is a ransom note made from this collage of magazines.

Pulliam-Moore: And for Harley?

Pugh: For Harley, I pictured her as a kid just with lots of layers. She’s wearing lots of clothes because she was wearing everything she was carrying with her. When you see her going to school for the first time, she had to carry all this stuff. And I thought “Well, what kind of bag would she have?” She was kind of unprepared for the whole thing, moving.

So she had to stuff everything into the pockets of her parka, and every time she moves, you see these big, expansive movements with rulers, and pencils, and pens to jutting out the parka. She’s constantly leaving a trail of debris. Those are the kinds of small details I think make you feel like these characters don’t just exist on the surface, but they go all the way back. 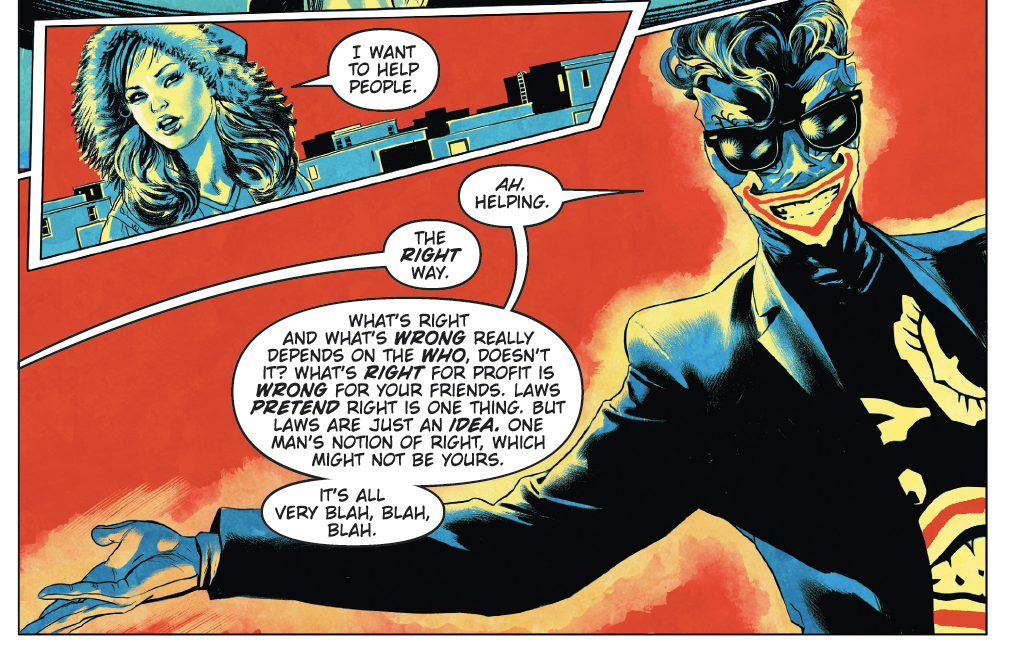 Harley getting her first inkling that the Joker might not be a good person. (Image: Steve Pugh, DC Comics)

Pulliam-Moore: A lot of fans cling very dearly to Harley’s classic origin story, but we’re going through this interesting period of storytellers rethinking her roots and deciding to just go in a completely different, but still familiar direction. What were the elements of Harley’s story that you wanted to elevate in Breaking Glass to really set your spin on the character apart?

Tamaki: The traditional hero’s journey is about the obstacles that are placed in front of something. Figuring out what emotional thing is standing in the way of you becoming the kind of hero you want to be.

But to me, that doesn’t really seem like a good fit for Harley. The question for Harley is more about which direction is she ultimately going to go in. I wanted her story to exist within the larger context of other people’s troubles.

Harley’s problems aren’t the only problems that exist at any given point of time and Ivy helps her come to understand that — to give her that perspective. The Joker exists to remind her that she can just destroy things that are bothering her, of course.

But Ivy’s there to remind her that whatever Harley’s going through pales in comparison to what someone else out there is likely going through because everything exists within a larger, imbalanced power structure that hurts people.

Pulliam-Moore: Right, and Harley understanding about that imbalance of power really makes it make more sense to steer the character in a different direction than her classic depiction. What value do you think there is in reimagining these characters and developing new incarnations of them?

Tamaki: I mean I think it’s always worth interrogating the stories we see as well as the tropes in them. It’s worth looking at those stories and seeing who isn’t part of these stories or can’t be part of those stories. A lot of the sort of original stories reflect the values of the time, or the ideas of the time about various things.

I see these things as expansive. How many Batmans are there at any given time? We certainly have no problem with multiple Batmen. Comics is one of the few places where you can say “Look, there’s these four versions of these characters who are existing at the same time, and they speak to different things.” I don’t think it’s about obliterating other stories, but being able to have a critical view of a character as a whole, which for me is interesting.