Usually, video game romances are about hot and heavy beginnings or fiery ends. Even visual novels often focus on the new and novel, rather than relationships that are doing their best to withstand the test of time. Haven, set to release next year, is different. It’s a game about a long-term relationship — ups, downs, squabbles, awkward moments, and all.

It’s a change of pace for French studio The Game Bakers, which previously made tough-as-nails boss battler Furi.

Speaking to Kotaku at PAX West last week, executive producer Audrey Leprince jokingly described Haven as an exceedingly French game, given that it revolves around “talking, drinking wine, and kissing.”

Its story centres around Yu and Kay, a couple that has escaped from their home world for mysterious reasons and arrived on a seemingly human-free planet. There, they explore, scavenge, study the local wildlife, cook, chill, and just generally try to live their lives. It’s about as far from Furi’s furious boss rushes as you can get.

“We did Furi, and it was the complete opposite experience,” said Leprince. “It was intense, challenging, and skill based. We didn’t want to do a Furi 2 because you can only surprise players once. If we did another, it would be good, but less memorable. We also wanted to a love story for a very long time, so we decided to work on this love story about a relationship — a couple that is already together.

It’s not dramatic, it’s not the beginning, it’s not the end, it’s not vengeance, or any of those classic things. It’s just a couple who are happy together. We wanted to give players a moment of peace and relaxation between Furi and Persona 5 or some other game that is very long and demanding.”

Of course, extreme isolation will do a number on even the most attached-at-the-hip couple’s tolerance for each others’ quirks, and Haven intends to explore that, as well. In the demo I played, Yu and Kay started out on their ship, the Nest, where an initially steamy moment was interrupted by a sudden power outage, which quickly led the couple into an argument about who was supposed to charge up the ship.

Where many romance-focused games would continue to explore this conflict through text, Haven’s characters opted to go outside and perform the most intimate act that two people could possibly do together: gameplay.

I controlled both characters as they hovered across the landscape, collecting an energy source called Flow by sailing through shimmering jet streams of the stuff. Movement felt a little floaty, but soaring, tumbling, and freewheeling through a not-quite-endless diamond sky felt good. It was exhilarating, but also chill, like bounding through new locations in Journey.

“It’s not the beginning, it’s not the end, it’s not vengeance, or any of those classic things. It’s just a couple who are happy together.”

During this sequence, I was also able to collect various plants for dishes Yu and Kay would cook once back aboard the Nest.

This ended up being a source of minor conflict for the two. Kay wanted more variety in a diet that, up to that point, had consisted largely of the same fruit. The two bickered over this issue, but it ultimately turned into loving banter. Haven’s goal, said Leprince, is to depict the tension that lies at the heart of a relationship between two very different people.

“We tried to have two personalities that are quite different,” she said. “Yu’s the hothead, quick to annoyance and action. Kay’s more careful, always has a plan. They have this tension, but they still work together.” 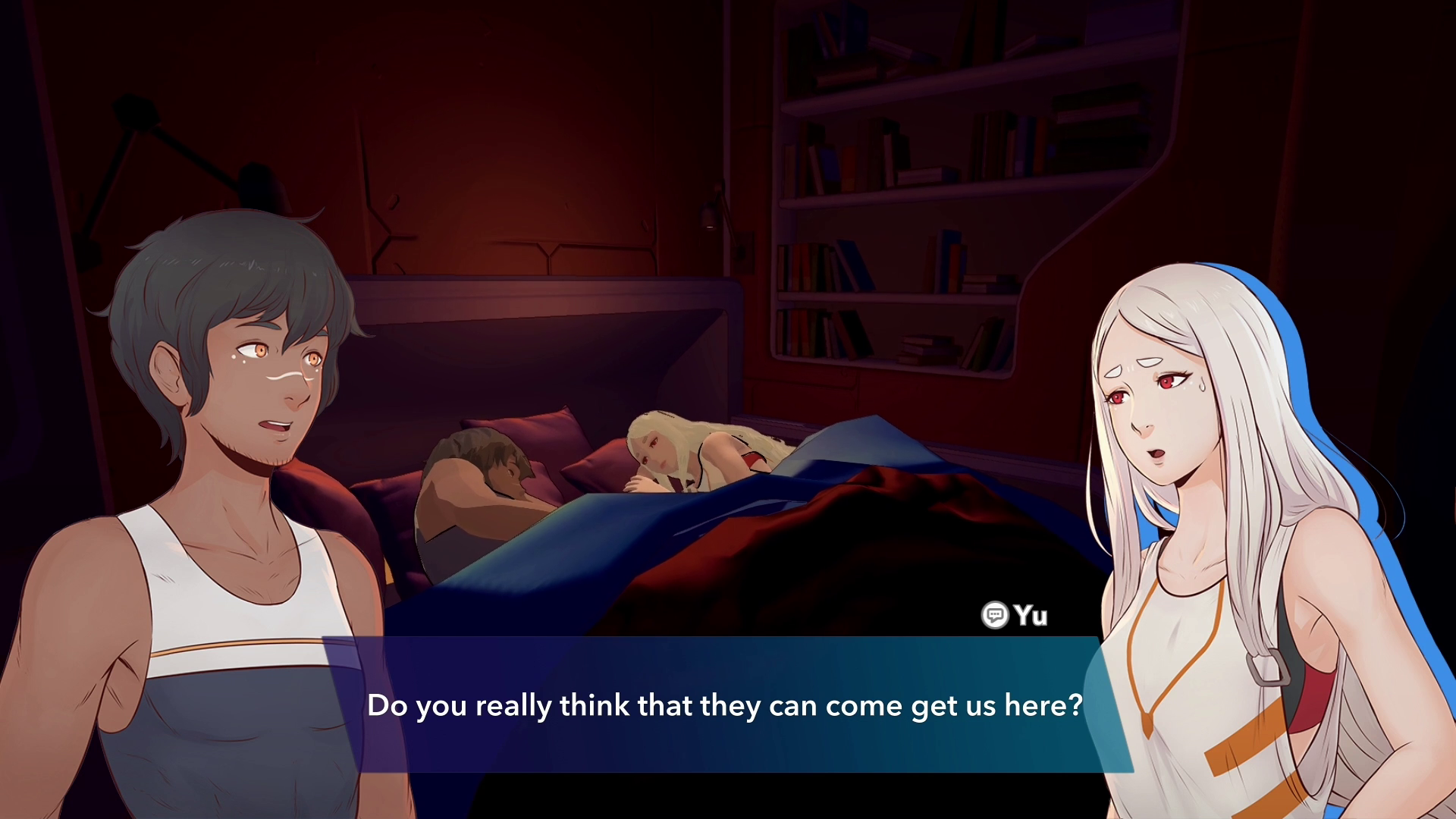 In the demo I played, the little touches went a long way. At one point, Yu and Kay discussed bigger concerns, like what might happen if their idyllic planetary paradise was shattered by unnamed forces that could be pursuing them. The conversation got heated. Kay said they needed to prepare for the worst. I was then given a dialogue choice for Yu in which I could have her say that if outer space anime bogeymen busted down their door, she’d either kill them or kill herself.

I picked the “kill them” option, which surprised Kay, who had seemingly not witnessed this side of his partner before. This whole conversation, I should add, took place not in some sci-fi corridor or out in the pastel-hued plains, but with Yu and Kay laying in bed, getting ready to go to sleep.

The scene felt different than it would in another game — more vulnerable and intimate, but also more surprising, given the fever pitch it eventually escalated to. In the end, Yu told Kay not to be afraid of her, and the two snuggled up and fell asleep.

This, said Leprince, is Haven in a nutshell. “How many times have you seen two characters in a video game in a bed under a sheet talking to each other?” she said. “Or hugging? Or kissing? This is how we’re going to present it. There’s going to be a lot of those moments where you know they are together… It’s an adult, open, mature relationship. And they don’t only talk about those concerns; they talk about all the other little things in everyday life.”

Haven is more than just a story game with exploration and cooking, though. It’s also got a JRPG-style combat system. Many of the planet’s monsters are friendly, but some are not. In battle, you control each character with one side of your controller. Combat looks turn-based but occurs in real time, with the player holding down buttons to fill corresponding meters that will allow them to execute attack and defence abilities.

This gives battles a rhythmic feeling that’s further accentuated by team-up attacks, which are required if you want to put a dent in bigger, more powerful baddies. It feels satisfying to break the individual rhythms you’ve established for Yu and Kay by using one of these team-ups; you could opt to hold down, say, the right arrow on one side of the controller and the square button on the other to unleash a big blast attack. And again, it underscores the central dynamic of the game: two unlike characters turning their differences into a synergy. 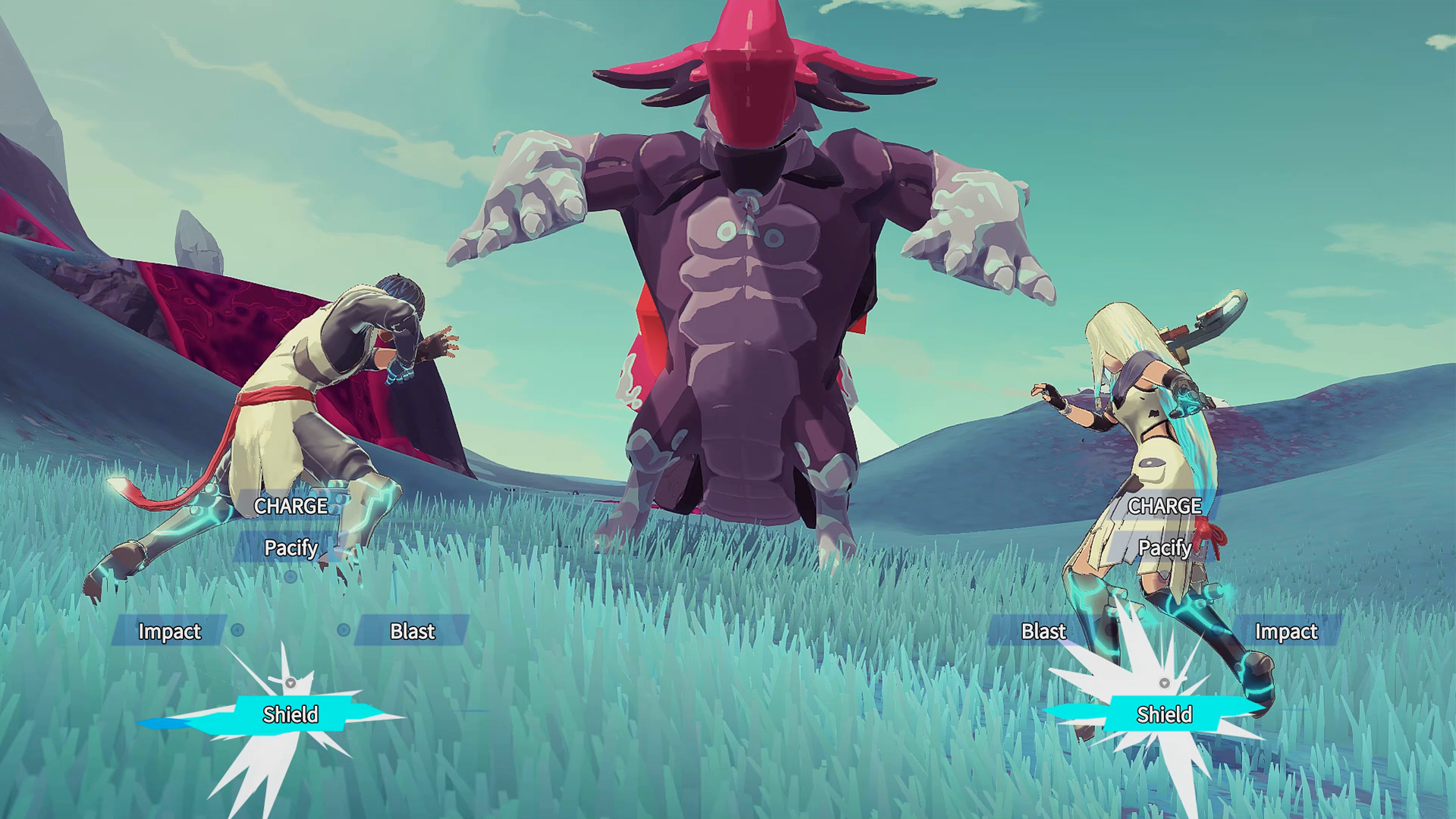 This, said Leprince, is why she and the rest of the team decided to make Haven an exploration-driven RPG and not a more straightforward narrative game.

It’s not just a story of two characters you could see in a movie or read in a book. You are going to make decisions that will impact their relationship and what will happen to them.”

This also means the player’s imagination can do a lot of heavy lifting, which Leprince believes can be more effective than literal depictions of physical intimacy, difficult as these moments can be to pull off using mannequin-like video game characters. “That helps us avoid the uncanny valley or people’s arms going through whatever,” she said. “The scenes are simple and suggestive. You can see a bit of what you want in them.”

“You don’t have to see a sex scene to know they just made love. We want you to just piece it together, imagine it, and feel at ease with it.”

Same goes for sex, which you will not see while playing, but which will be implied because these characters are adults, and sex is a natural part of many (though not all) romantic relationships.

“We could either be too cheesy or too much a narrative game, or we could go into adult-rated territory,” Leprince said. “We don’t want to be in the middle of that. We just want it to feel natural. You don’t have to see a sex scene to know they just made love. We want you to just piece it together, imagine it, and feel at ease with it.”

Though Haven’s larger plot hints at some fairly serious beats to come, Leprince repeatedly emphasised the ideas of ease and relaxation. The game also has co-operative multiplayer.

Whenever they want, a second player can pick up a controller and play as one half of the couple, at which point both players have to communicate about dialogue choices and collaborate in battle. Ultimately, though, the goal is for players’ respective skill levels to be a non-factor in collaborative play. “There should be no stress about skill,” Leprince said. “We don’t you to have to worry about your combat and upgrades. We want you to just enjoy your life.” 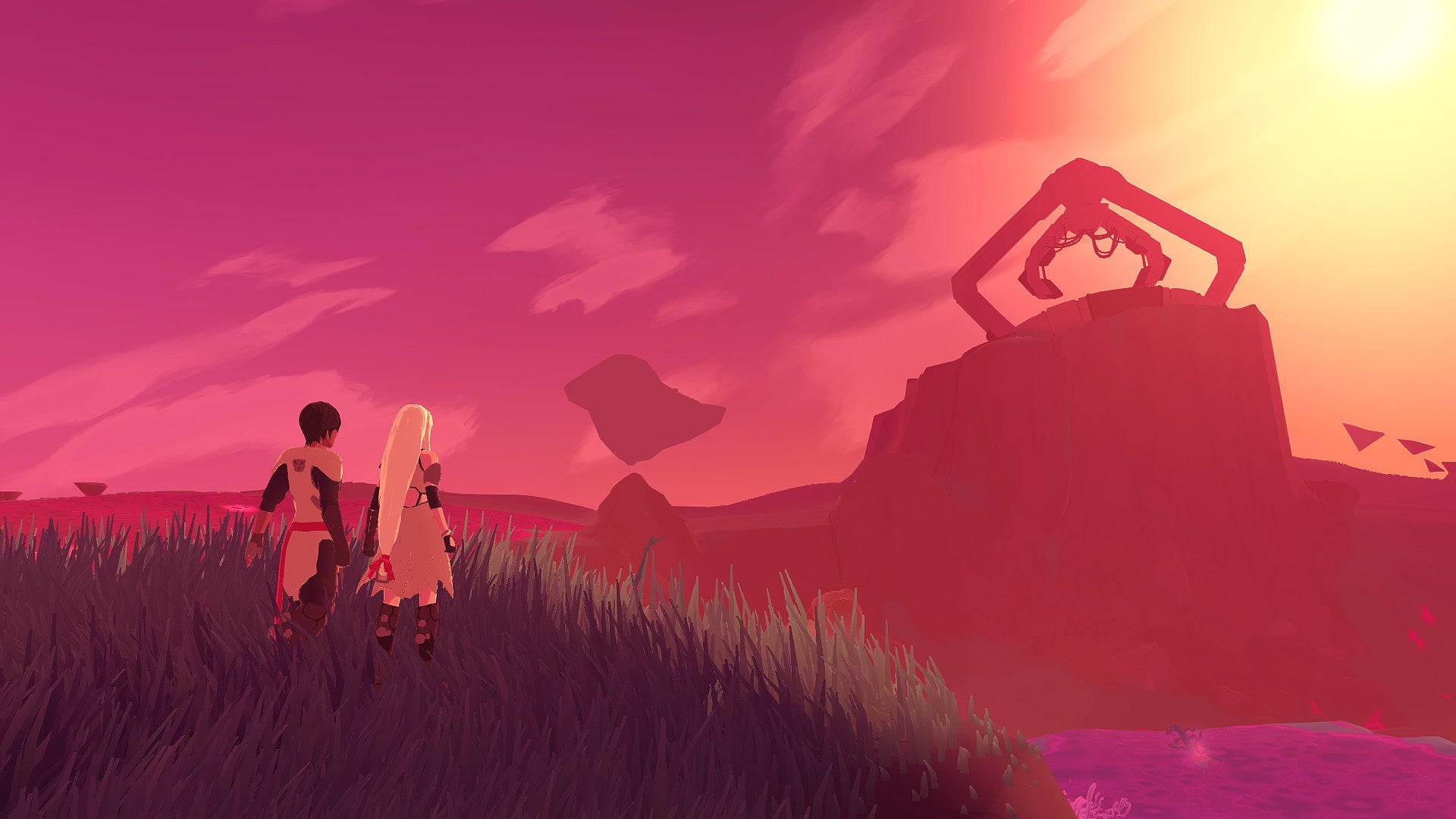 This theme in the game’s design and narrative is inspired by the development team’s own experiences. Regardless of how people choose to play Haven, Leprince and company hope that players will see a bit of themselves in the characters and recognise that relationships don’t have to be a series of seismic turnovers or revelatory meet-cutes. Sometimes, just existing together is more than enough.

“The creative director and myself, we are a bit older — 40 plus,” Leprince said. “We have been in long-term relationships for a long time. We really wanted to show that it’s possible to be happy in everyday life with the same person for a long time. You don’t have to just be breaking up and dating again and breaking up.”