Hitman 2’s Luxury Resort Is The Perfect Setting For Murder

Hitman 2’s latest DLC takes Agent 47 to a tropical resort called Haven in the Maldives where the rich and powerful relax as their criminal pasts are wiped off the record. The mission, “The Last Resort,” is full of luxurious environments to explore and sneering elite to take down — all the things that make a Hitman level great.

Your targets are, of course, connected to the shadowy Partners and Hitman’s ongoing conspiracy story of betrayal within the Providence organisation. Ljudmila Vetrova handles Haven’s clients, Tyson Williams is its CEO, and Steven Bradley handles the computers. They’re spread out across the island, which isn’t large but is dense, packed with hard-to-access buildings and people who can see you almost all the time. This makes for plenty of ways to engineer assassination attempts, but pulling them off without getting spotted can be tricky.

Haven is a luxury resort: There’s a pool with a swim-up bar, a gym, a restaurant, and a spa. Agent 47, disguised as a guest, gets his own cabin, complete with complimentary beachwear. It’s always fun to inhabit the fantasy of Hitman, especially when you get to play pretend as the global elite. Haven reminded me in many ways of the previous Hitman’s Hokkaido level in its chill elegance.

I spent some of my time just wandering around barefoot, splashing in my cabin’s infinity pool and watching people dance at the bar. You can overhear Haven’s patrons gossiping about others and discussing their legal woes, and this adds to the feeling that you’re in an alternate universe of terrible rich people. It’s exciting to know you’re the wrench in their gears, to bide your time even as you enjoy the luxuries on offer.

While Ljudmila wanders the grounds, Steven has his own private area, and Tyson is secreted away in a heavily guarded villa. I didn’t have much trouble taking Steven out by using his braggadocious personality against him, but Tyson and Ljudmila were more difficult. Ljudmila was almost always in public areas, and Tyson’s villa proved tricky to navigate without alerting guards or being spotted.

Many of the assassination attempts I tried, even when in an appropriate disguise, were thwarted by an unnoticed spectator being suspicious of my actions. The mission’s buildings aren’t very large, but almost every room seemed to have at least one pair of inconvenient eyes making things tricky. It took me several tries to isolate Tyson, and I expected a witness to come around the corner any second. The placement of characters gave “The Last Resort” a tension that conflicts with its holiday atmosphere and further highlights the sense of 47 being an outsider. 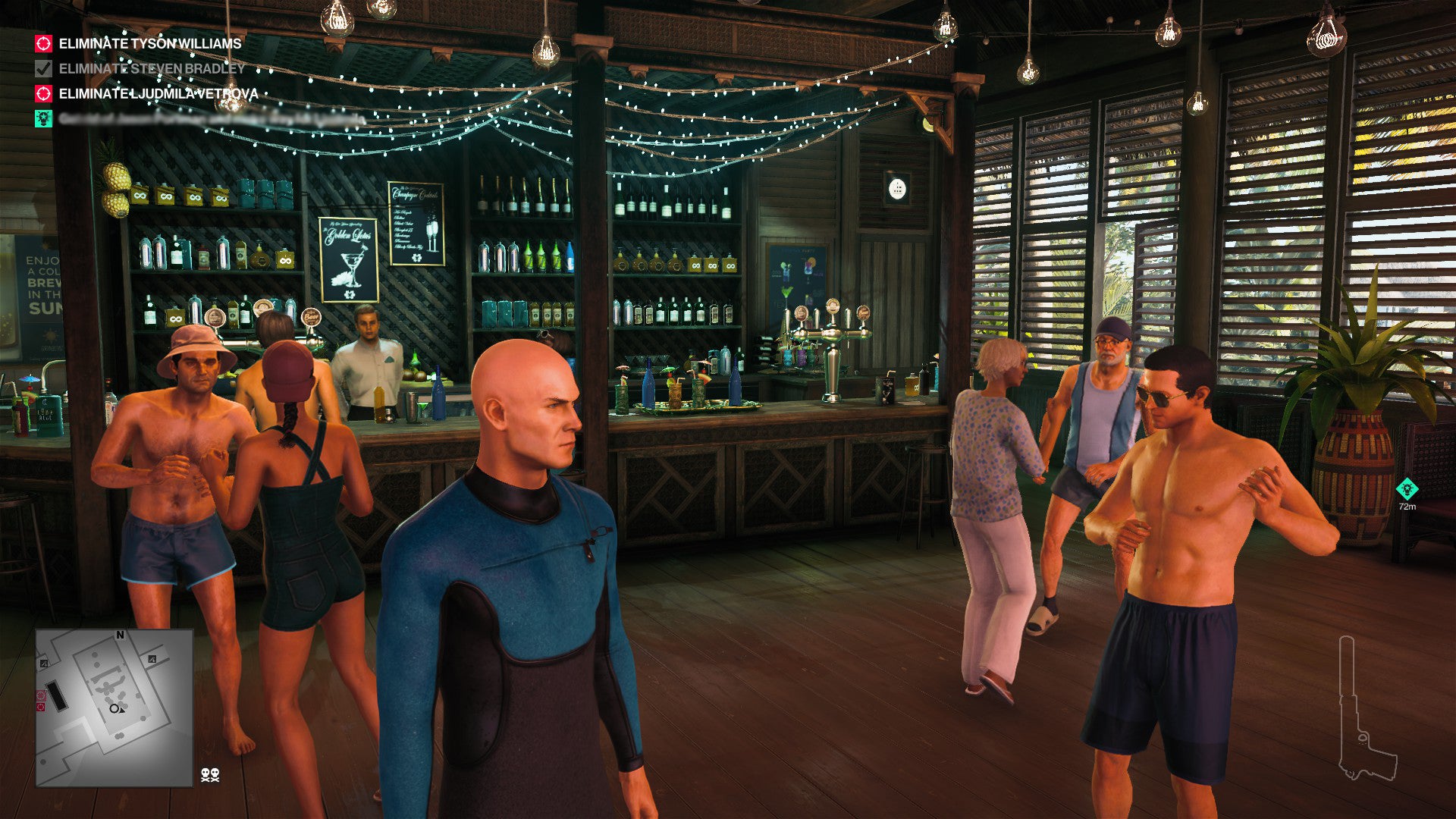 Despite the stress of trying to find exactly the right moment to loosen a bolt or take a shot, “The Last Resort” also has an appropriate sense of languor to it. I felt like characters wandered at their leisure, or lingered in places for a long time. I spent a lot of my playthrough just waiting for them to complete their rounds. This interplay of patience and split-second decisions is a distinctly Hitman feeling, here used to further isolate 47 from the world around him.

As I was attempting my final assassination of Tyson, creeping up and down the wide, elegant stairs of his villa, a storm rolled in. The bright blue water that surrounds Haven turned grey, and thunder rumbled ominously. Surrounded by a storm, Haven felt remote, menacing despite its opulence. “The Last Resort” feels like Hitman in all the best ways, and I’m excited to dig into it more and see the creative assassinations other players come up with.