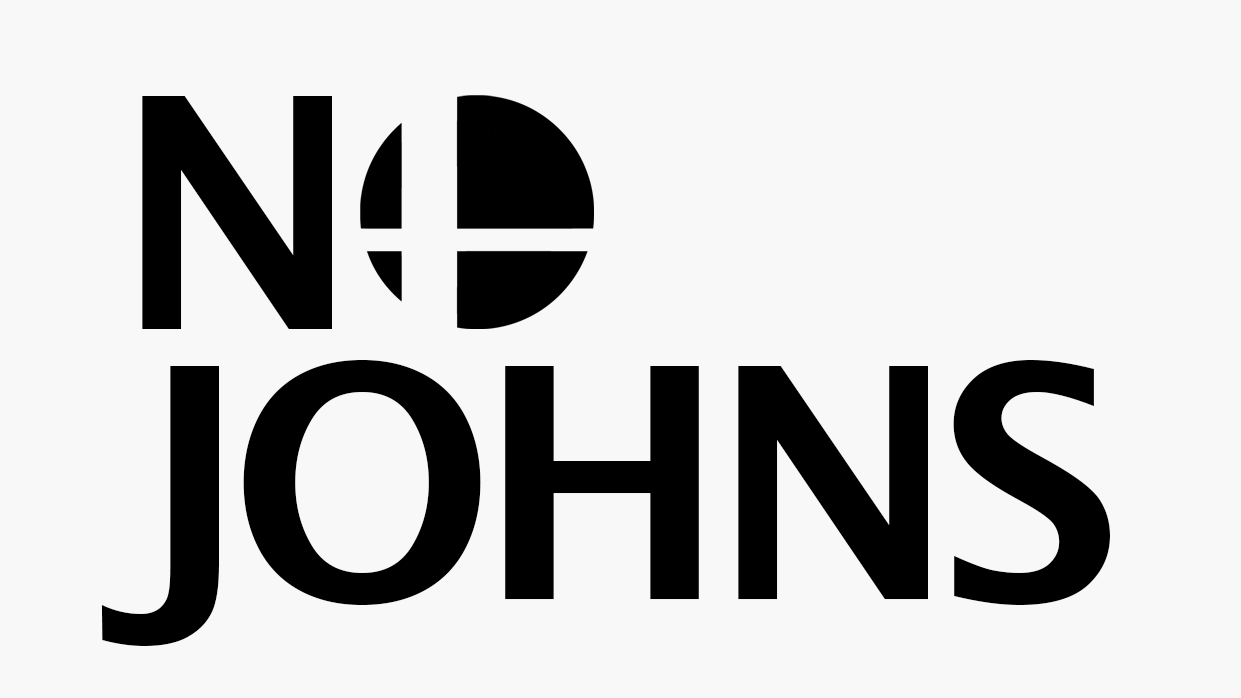 In 2014, Nintendo of America president Reggie Fils-Aime, beloved among the Super Smash Bros. competitive community, formally blessed the group before that year’s EVO fighting game tournament. It was the first year that Nintendo had officially sponsored the event. “Today, you’re all showing your abilities at Super Smash Bros. Melee,” he said in a video message. And then, with a wink and a nudge to the Smash diehards watching: “You never know, I might show up to challenge you someday. And if we do ever go head to head, please — no Johns.”


If you’ve spent any significant time around competitive Super Smash Bros. players, or devotees of any fighting game, you’ve heard the phrase. A “John” is any excuse made by a losing player. My hands were still wet from washing them. It’s cold in here. I’m hungry. The joystick is sticky. Vibration was on. There’s controller lag. The television screen is too far away. Generally, a John is a transparent attempt to deflect blame from the loser and chip away at the glory of the winner.

“No Johns” is such a ubiquitous phrase in the Smash scene that it’s even inspired regional variations around the world. No Stacos. No Tiesos. No Joshis. Igna Yunas, in Swedish. It even made it into Smash itself: One of the “random” names that players can assign themselves in the Wii U and Switch versions of the fighting game is NOJOHNS.

Like a lot of living catchphrases, the particular circumstances of its creation have been smoothed over like a shard of sea glass, smooth enough now to be thrown out by anyone into any water.

But there is a real John, a Smash player from the Crystal City, Texas region. (Kotaku tracked down John, but speaking through a friend, he declined to be interviewed. We are withholding his last name for privacy reasons.) And his story, told through his childhood friends, is a throwback to an early sort of virality that, today, might seem quaint to competitive gamers used to hearing some huge, new meme every week.

“I never thought it would turn into anything this big,” said Smash player Roberto “Rob$” Aldape. The phrase had its origin in the late 1990s, when Aldape was a freshman in high school and playing the latest Nintendo 64 games with his crew: Jesse “Zulu” Fuentes, Adrian “Caveman” Sanchez, and John. John always had the latest Nintendo 64 games and he was often quick to pick up on their mechanics, which endeared him to the boys.

“I remember John being really smart. He always had a bunch of games compared to me,” said Aldape. Aldape’s strict parents didn’t let him hang out at friends’ houses or attend sleepovers before high school, and so now, whenever he had a chance to game with his buddies, he took full advantage. When Super Smash Bros. 64 came out, they’d grind on the game for hours at whoever’s house was free.

John, said Fuentes, was actually pretty good at Smash, especially with the F-Zero fighter Captain Falcon. “He was a great player, actually. You know, one of the best. But when he’d lose, he’d always have an excuse, which was kind of humorous.”

Aldape and Fuentes shared some of the earliest Johns: My eyes are itchy. My wrist hurts. My controller isn’t working properly. “If I hit him off the edge, and he was trying to come back in and I spike him, he’d lessen what I did,” said Aldape. “Like, ‘You weren’t doing something badass. It was me pressing the wrong button.’”

One day, when the friends were playing without John, someone made an excuse for their loss. As Fuentes tells it, he was the first to say “No Johns” in response. They all started saying it, eventually even when John was present. “I was kind of embarrassed, but I did eventually say it to him,” said Fuentes. “‘No Johns.’ He’d get mad, turn red.”

The motley crew of high school freshmen from Crystal City is now famous among old-school competitive Smash players. In the early 2000s, Aldape, Fuentes, and Sanchez moved on from pummelling each other in suburban Texas basements, first to Smash tournaments in San Antonio, then to huge events in California or Chicago.

On the Smashboards forum, Aldape would trash talk opponents he’d faced, using the phrase. As Fuentes and Aldape became more competitive with 2001’s Super Smash Bros. Melee and entered the greater, budding Smash competitive circuit, they used their local phrase freely in their one-on-one matches and while commentating on others’.

“When we started destroying kids at Smash, we’d get the excuses, and say ‘No Johns.’ I’d go on Smashboards later and be like, ‘No Johns,’ you got beat fair and square,’” said Aldape. Over the course of a year or two, Aldape said he began hearing other people say it independently of him. It spread and spread. At a tournament in Chicago, which he would go on to win, Aldape knew that the phrase had taken on its own life when he was flabbergasted to see a competitor show up wearing a T-shirt that read “No Johns.”

Smash commentator D’Ron “D1” Maingrette heard the term first in 2005 at a New York City venue called Neutral Grounds. “Seeing people get upset after the results of their match, members would just yell ‘No Johns!’” he said. “The moment they’d hear that, they’d clam up.”

Maingrette didn’t know who John was, or even if there was a John, but he understood the implication. “I immediately thought to myself, ‘If I enter future tournaments, I’m not gonna lose and make excuses. I don’t want to be the subject of that.’”

I didn’t get any hand warmers. I didn’t warm up properly. I didn’t get enough sleep last night. There’s television lag. These are some of the Johns that Maingrette says he’s heard over the years. When asked whether he’s ever Johned, Maingrette said he has, but only one that he believes is really true. “If I wash my hands with cold water — I always wash my hands — I lose the blood flow and my hands can’t react as fast. I don’t play at my best.”

“No Johns” didn’t just catch on in the U.S. Smash scene, either. “One time right after I lost a set, I got up and went straight to get a Coke,” said Luis “Tieso” Rivera, a Smash player from Tampico, Mexico. “My excuse was that I was feeling kinda sick in the set since my sugar levels were down.” His friends immediately turned it into a verb: Tiesar, meaning “to pull a Tieso,” meaning to make an excuse.

“It’s half true, half not,” said Rivera of his “low sugar” complaint. “I was in fact feeling sick, but there was no way I knew why.” Looking back on the tournament, Rivera said he “never stopped complaining” the whole time. After that, Rivera’s friend, who goes by Waymas, put “Tiesar” in SSBWiki.com’s entry for “No Johns” under the “regional variants” section. Rivera’s not bothered by it. “It’s a fun way for our scene to have fun with its members,” Rivera said.

Jose “Joshi” Rodriguez started hearing “No Johns” in his Spanish Smash community as early as 15 years ago. “Joshi” also appears under the Wiki’s “regional variants” section, which, Rodriguez said, was used to “degrade” him. “We were sort of a meme in the community,” he said.

“Actually, I did put a lot of ‘excuses,’” Rodriguez said. “I still do it today. I’m sort of an analytical and very outspoken person, so every time I lost, I always analysed my match out loud. Some people took it the wrong way and thought they were excuses.”

If an opponent’s attack penetrates his shield because he didn’t pull it fast enough, Rodriguez said he’d make a comment about that. “I can sympathise, because it’s not cool to have someone pinpoint the things like that: It makes your victory feels worthless, like it was some sort of luck factor. It was not my intention, but well.”

Rodriguez isn’t happy about the way “No Joshis” has caught on. A while back, he says, it was a meme, but “nowadays if someone says it, it is to outright downplay or hurt me.” Rodriguez said he stopped playing Smash in part because of those jokes.

“I fought hard to earn places and respect and I was still a meme,” he said. “Imagine that using your name as a bad-meaning adjective. It feels nothing short of ‘You are so horrible that you are your own person and it’s helpless.’”

Although his friends from the Crystal City crew went on to become fixtures of the competitive Smash scene, John himself would demur. Sometimes, he’d attend tournaments, but wouldn’t compete. He went on to pursue other things, like college and the army.

“Everybody would use the term, ‘No Johns, No Johns,’ and people would laugh, and it kind of just caught on, but nobody ever knew who John was,” said Jesse Fuentes. John has remained under the radar ever since, although there have been multiple attempts to find and interview him, once by the makers of the 2013 documentary The Smash Brothers.

Looking back on the time at which “No Johns” was created, Aldape said, he and his friends weren’t supportive enough of each other’s successes. Getting better meant being extra critical of yourself, why you lost, and sometimes, that expressed itself in a John. “We didn’t give each other props. We weren’t used to that. When I did something good, I knew myself I did something good and I never had anyone tell me, ‘Nice.’”

Adape remembered the first tournament he attended where someone actually complimented his gameplay, in San Antonio. “I went to that tournament, and I was doing good. I kept hearing people say ‘Nice.’” Aldape wasn’t sure he had heard them properly. But then he started using “Nice,” too, when a competitor would pull off a clutch spike or a tight combo.

“The way I picked up ‘Nice,’” Aldape said, “was the way other people picked up ‘John.”