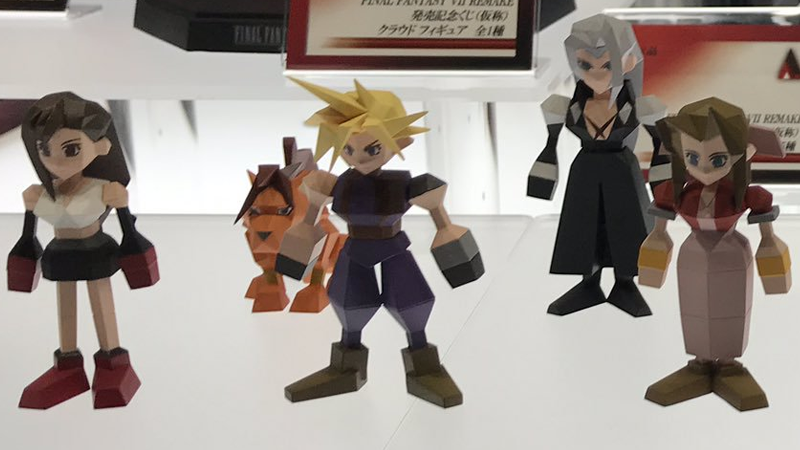 We live in a truly incredible time for action figures — whether you’re wanting to spend a couple hundred bucks or even just twenty, you can get well articulated, highly detailed recreations of some of your favourite characters from all sorts of shows, movies, comics, and games. But it means we also get this: amazingly intentionally old toys.

At Tokyo Game Show this week, Square-Enix, purveyor of all things chocobos and Donald Duck as a master of black magicks, dazzled fans across the world with the latest look at Final Fantasy VII Remake, the multi-part, bold re-imagining of the JRPG icon of the ‘90s.

It looks beautiful, rendering beloved characters like Cloud, Tifa, Barrett, and Aerith with the power of modern gaming graphics in a level of fidelity they’ve never been seen in before. Not even really in Advent Children, that CG movie that was bad except for that maybe two fight scenes and we shouldn’t talk about it!

But anyway, they also had these action figures on display, where Cloud, Tifa, Barrett, Aerith and all their friends and foes from the original game look exactly like the blocky, polygonal chibi blobs they looked like outside of battle in the original PlayStation game.

And I need them immediately.

There were no details about how and when fans either in or out of Japan will be able to get the figures — the accompanying placard implies they could even, much to the chagrin of my wallet, be blind-box items, with a mystery character teased for the set.

But I just… need to know how and when. I’ll import, I’ll do whatever. I need these chunky, blocky looking action figures on my desk, revelling in the majesty of the original Playstation’s attempts to bend polygonal 3D gaming to its limited technological will. They only have blurry eyes for faces! There’s enough sharp angles to send a mathematician into a headspin! They don’t even have hands! And I love them. They’re ugly and they’re perfect.

I never really understood the current fascination with retro action figures — why pay modern, premium pricing for a toy designed to look deliberately crappy? Turns out, I just need catering to my ‘90s kid childhood to realise what ‘80s kids have known for a while.