I Love You, Colonel Sanders!: The Kotaku Review

i love you colonel sanderskfcvisual novel

The difference between I Love You, Colonel Sanders! A Finger Lickin’ Good Dating Simulator and the dating sims I’ve enjoyed is sincerity. That’s hard to come by in a game that’s actually about making its players fall in love with the idea of buying fried chicken.

Dating games and visual novels in general often find their strength in the sincerity and earnestness written into them. Romance, even romantic comedy, works best if you believe there’s a kernel of real emotion in it.

This is true in even the goofiest dating sims. There’s Hatoful Boyfriend, a game in which you date pigeons and that makes an effort to present characters who are loveable and intriguing. There’s Nameless, a game in which you fall in love with ball-jointed dolls that have come to life. It has intense backstories for each love interest and effectively exhibits lives affected by trauma.

And then there’s Colonel Sanders, a supposedly comedic dating game without any good jokes and, worse, without any characters you can really feel. 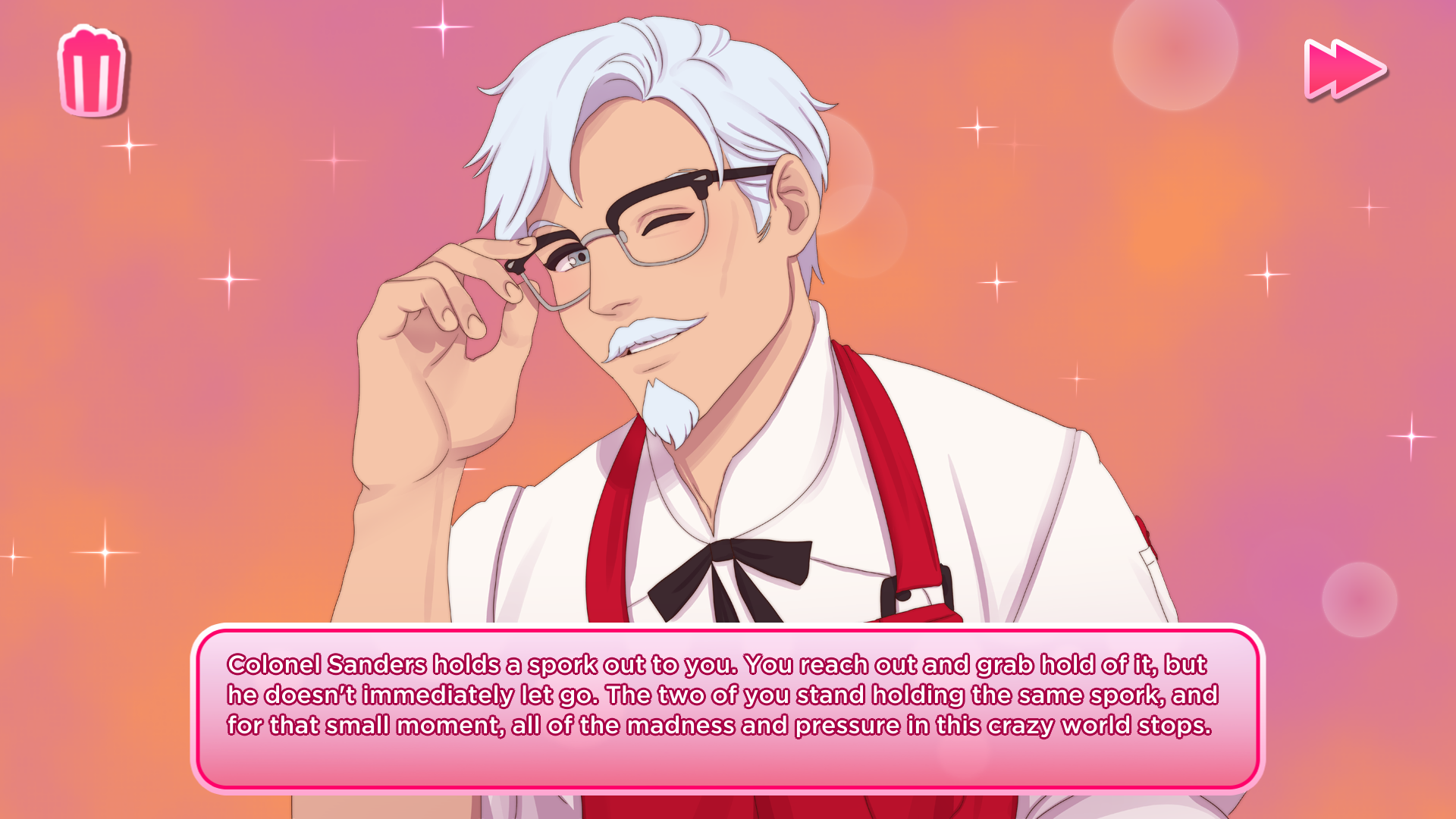 In I Love You, Colonel Sanders, I, the player, was charged with forming a romantic connection with the titular Colonel Sanders, the mascot for the fried chicken fast food restaurant KFC. In this game, you’re a student at a prestigious culinary school that Sanders also attends. Your character is attracted to him by default. Of the students in class, he is the only one who is referred to as attractive to the player. It’s romance as tautology: you want to date him because you want to date him.

In order to romance the colonel, you have to choose the correct dialogue choices when the game presents them to you. There are wrong choices, and you can lose if you pick them. I got a game over after being too forward with Colonel Sanders after trying on one of his white jackets.

I’d selected the option for making my “big move” in the outfit, which I guess was supposed to have a sexual undertone that I didn’t pick up on until afterward. The choices are mostly straightforward. The only thing that Colonel Sanders really cares about is chicken, and most chicken-related dialogue choices will take you pretty far.

The characters in the game are bog-standard anime archetypes. Aeshleigh, your rival, is haughty and mean. Your best friend, Miriam, is energetic and enthusiastic, and looks and acts so much like Kill La Kill’s similar character Mako Mankanshoku that I half-expected to be able to cut down my enemies with half of a giant pair of scissors. Colonel Sanders himself is a handsome and effortless bishonen, a mysterious pretty boy with the emotional depth of a paper plate. That is where all the character begin and end. 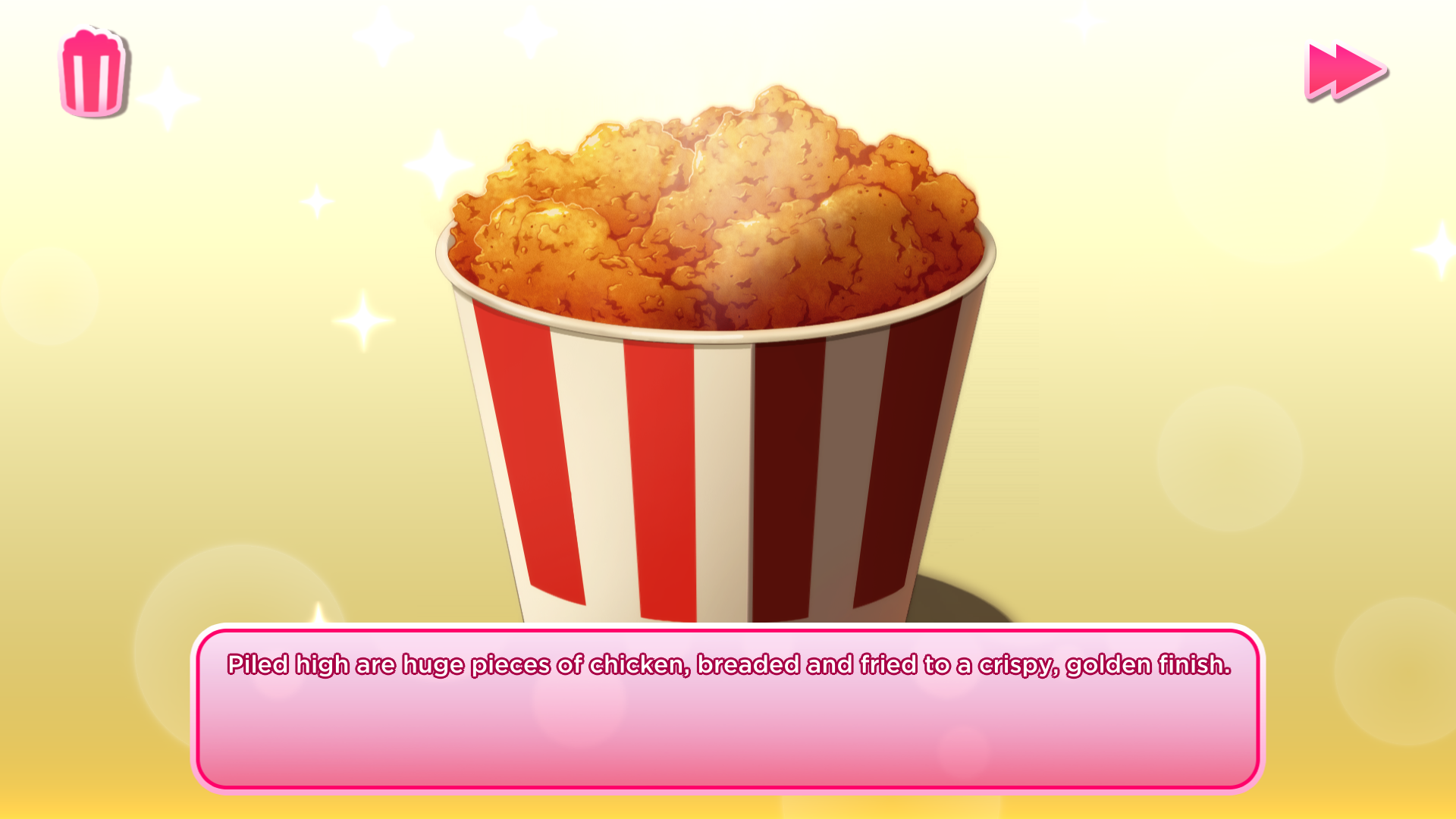 I Love You, Colonel Sanders!

Rather than focus on character writing and narrative, the game hinges on zaniness. Your professor at culinary school is a dog named Sprinkles, and the semesters only last three days. Over the course of your time at school, you’ll find a book of black magic, watch Colonel Sanders ride in on a horse, finish a few pop quizzes about the KFC brand, and fight a monster made of sporks and mashed potatoes. From what I can figure, the game wants me to find these things funny because they are kooky. Your teacher… is a dog? Wow, now I’ve seen everything!

Colonel Sanders might be intended as an affectionate parody of dating sims, but try as I might, I’m not actually sure it’s parodying any dating sim I’ve ever played. I think the game would have been stronger if it had gotten a little more specific. Dating sims are silly. They’re melodramatic soap operas, and often formulaic. Why not throw in a contrived meet cute, like so many other dating sims I’ve played? Instead I Love You, Colonel Sanders gestures at the overarching concepts of dating sims before ushering the player on to the next illustration of KFC products.

What attempts at warmth and sincerity does I Love You, Colonel Sanders give the player? None, unless you count the heat implied to be used to fry some chicken. The only things that ever rang as true to life, or even true to the genre of the game, were the loving descriptions and illustrations of real life KFC food stuffs. 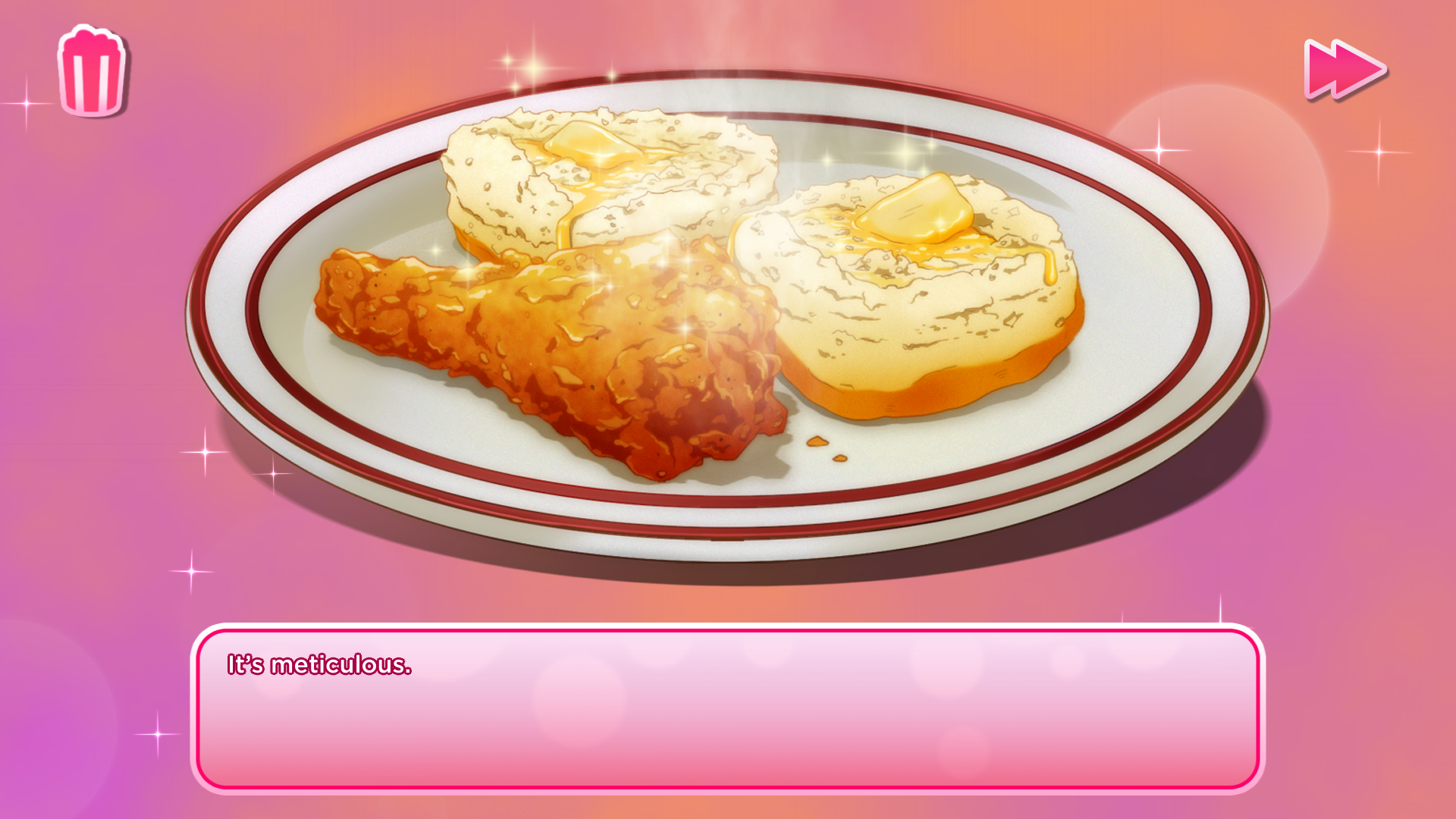 I came away from I Love You, Colonel Sanders confused more than anything. It’s not actively hostile to the genre, but also doesn’t take the genre seriously enough to be funny to fans of it.

By the end of the game, I didn’t feel as though Colonel Sanders was my love interest. If anything, the food was. For the main character’s final exam, I teamed up with Colonel Sanders to make a KFC Famous Bowl, the truly nausea inducing combination of chicken tenders, mashed potatoes and mac and cheese.

Despite the game acknowledging that this combination of foods is a nightmare, Professor Sprinkles gave it full marks, calling it delicious. At that point, the jig was up for me. It’s hard to fall in love when you are ultimately being asked to buy fried chicken.