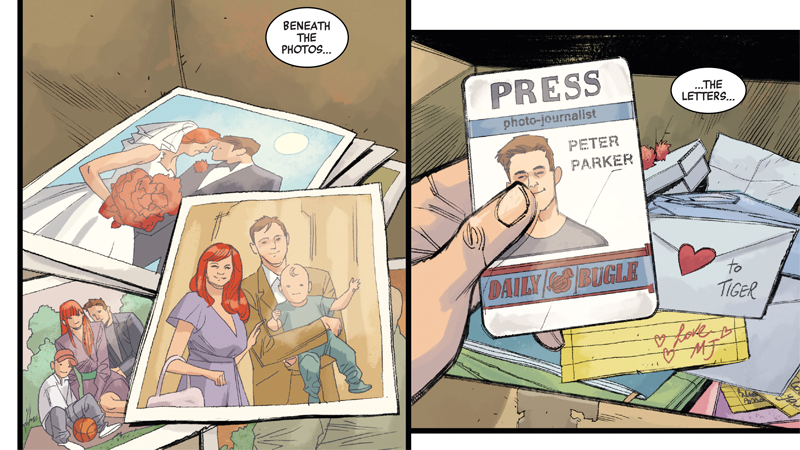 It feels glib to cast Spider-Man ” the simply titled miniseries that represents J.J. Abrams and his son Henry’s foray into comics writing, alongside legendary Ultimate Spider-Man artist Sara Pichelli ” as “The Force Awakens but with more Spandex.” But, for all his love of mysteries, Abrams’ venture into the web of Peter Parker is as much about his past work as it is the webslinger himself.

Set in its own version of Marvel continuity, Spider-Man #1 ” by the Abrams duo, Pichelli, Elisabetta D’Amico, Dave Stewart, and Joe Caramagna ” picks up 12 years after a horrifying battle with an unknown alien force (lead by a villain named, I kid you not, Cadaverous) puts Peter Parker through one hell of a ringer. Not only does he lose the lower half of his right arm facing off against Cadaverous and his hordes… 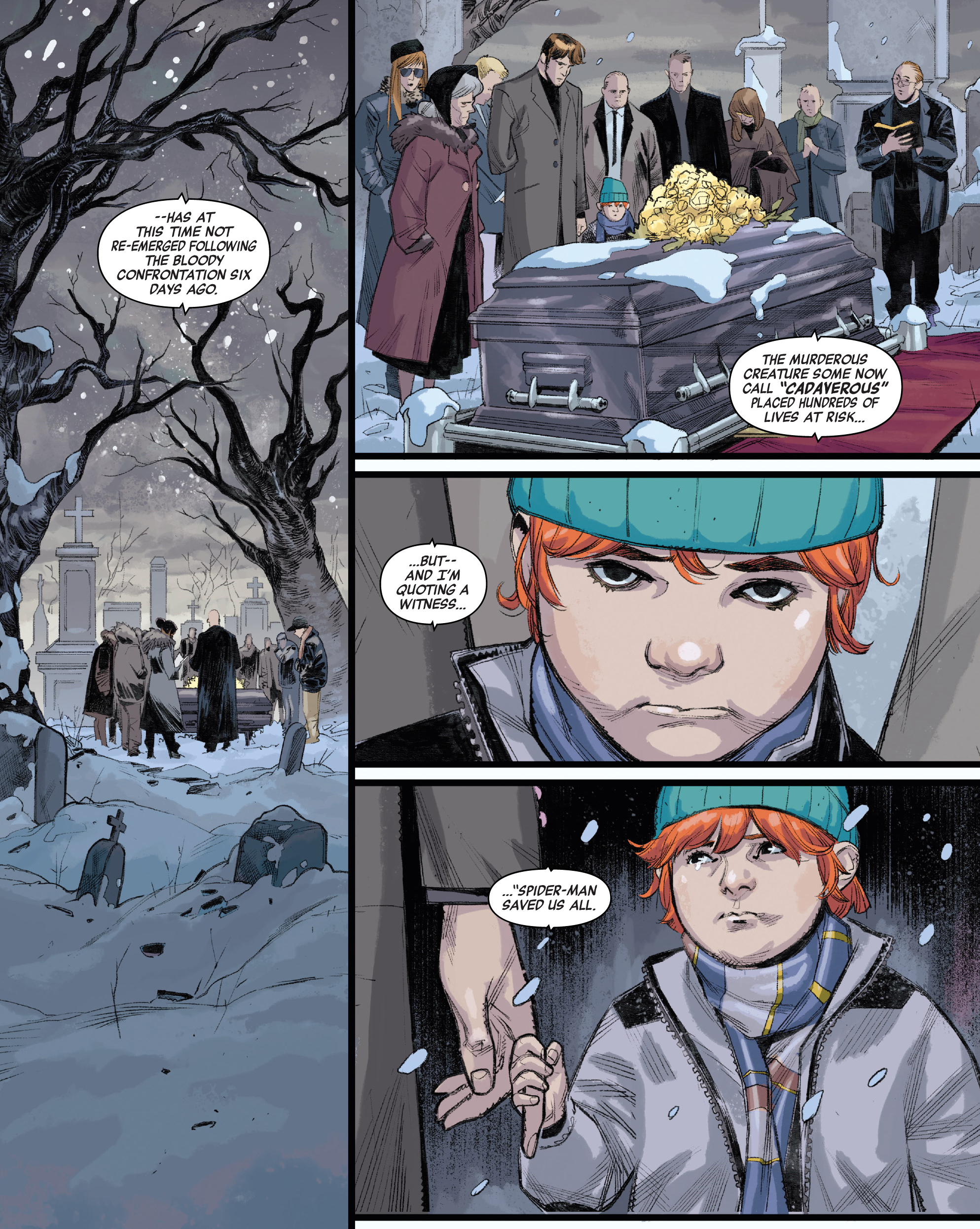 He loses his wife, Mary Jane Watson, leaving their son, Ben, with no mother and a traumatized and broken father. Twelve years later Peter Parker is no longer Spider-Man, he’s rough and rugged and so very tired of the world around him, shut off from the people who care about him the most. Ben is a likewise moody teenager, desperate to discover who he is in a sea of conflicting emotions about his absent parents.

Put Peter in some cream robes and dump him on a secluded island, and you start to feel that this is an Abrams-patented “it’s a sequel, but it’s the thing you love told over again,” don’t you?

But as easy as a comparison that is to make, this is par for the course with the franchises Abrams has been attached to reboot in the past, from Star Wars ” not truly a reboot, sure, but definitely in the vein of one ” to Star Trek, and even to the more recent rumours that his recent deal with Warner Bros. could in part involve a potential look at rebooting Superman. (It wouldn’t be the first time he’s been associated with the character; Abrams was once attached to a Superman film adaptation, Flyby, which was absolutely insane.) Spider-Man #1 is, like those prior Abrams re-imaginings, a tale of generational legacies, of connecting the mystery behind the lingering threat (in this case, Cadaverous, who seemingly has some kind of Mary Jane clone and a twisted connection to Spider-Man beyond it, as part of his mostly unexplored reasoning for his villain) to something deeply personal for our heroes.

It’s fitting that this is a collaboration between Abrams and his own son from a writing perspective, because ” in the Abrams family style of stripping away the esoteric weirdness we know of a franchise to tell a story that is primarily grounded in human, intrapersonal dramas ” this is a comic that is also all about the tempestuous, enduring relationships between children and their parents.

Ben spends most of the issue slowly but surely awakening to his own familiar set of powers ” both literally, in that he starts sticking to doors when he’s stressed out, and idealistically, in that like his father before him, he has an unwavering desire to do the right thing no matter how much trouble it gets him in ” blissfully unaware of his father’s past and the connection it has to his mother’s death.

The comparisons between him, and Rey, and the young Jim Kirk really start to emerge ” their rebellious streak, their anger at the world, their longing for a sense of self, the pain and loss that defined their childhoods, it’s all there. 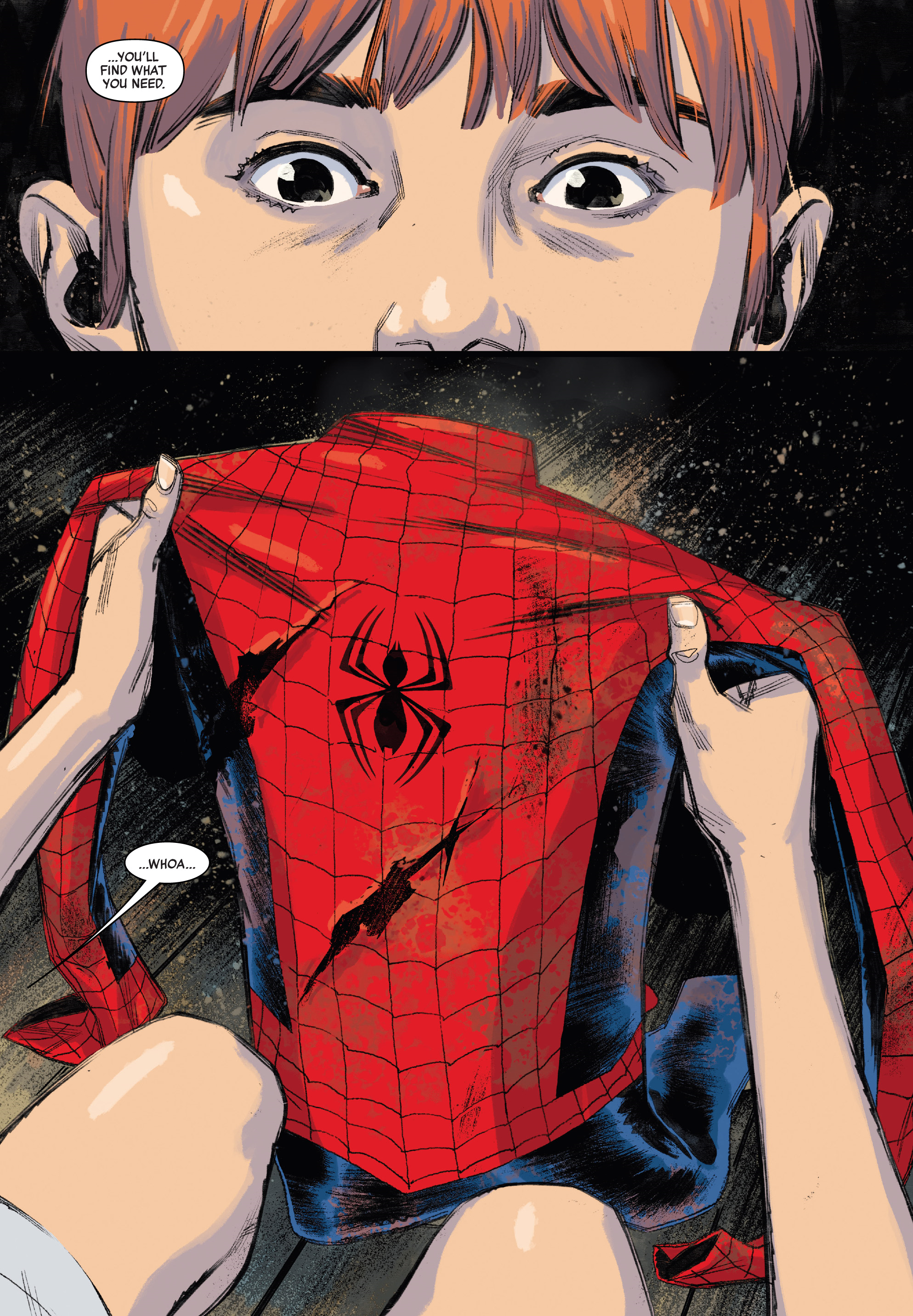 As is the discovery they’re part of a destiny far larger than themselves.

Coming into the announcement of this series, Marvel Editor in Chief C.B. Cebulski hyped up the reveal as the potential next big hit for the publisher ” the book that could break Star Wars #1’s fabled, seemingly-impossible-to-reach-in-this-market target of one million copies sold.

So far, it doesn’t seem likely: it’s a tale eternally retold retold once more ” Ben is not the first child of Peter Parker and Mary Jane Watson to have ever followed in their father’s heroic footsteps ” with a few tired unfortunate twists like Mary Jane’s casual murder thrown in for good measure.

As something particularly visionary and new for Spider-Man’s vast, enduringly flexible legacy, Spider-Man #1 is less of a fresh twist on its own, and more of a mediation on a theme Abrams has tackled time and time again.

But, to the tune of two billion dollars with The Force Awakens and nearly $586 million with Star Trek (it might seem like chump change in comparison, but for TrekÂ it was astronomical), it’s hard to say it’s not worked for the director in the past. We just have to wait and see what he and his son do beyond it as this story progresses.