avengerslenovolenovo miragemarvelmarvel dimension of heroesreviews
To sign up for our daily newsletter covering the latest news, features and reviews, head HERE. For a running feed of all our stories, follow us on Twitter HERE. Or you can bookmark the Kotaku Australia homepage to visit whenever you need a news fix.

For the past few years, hardware manufacturers and game studios have been valiantly trying to sell the public on the idea of virtual and augmented reality being a core aspect of the future of gaming. Their efforts have been in vain for the most part because, outside of hyper-controlled environments, entry-level gaming setups like Lenovo’s Mirage AR are both too sensitive and not sophisticated enough to create the kind of fully-immersive experience that promotional materials promise.

Lenovo’s hoping that a splashy new Avengers-themed game, featuring characters like Captain Marvel and the Black Panther, will be more than enough to convince folks to drop around $365 on two-year old technology that we weren’t exactly hot about when we first got our hands on it.

While there are certainly a few aspects of the game that’ll make you smile (when they actually work), Marvel Dimension of Heroes inadvertently highlights how developers still haven’t really figured out how to take these kinds of applications of AR and turn them into reliably solid gaming experiences that feel fully thought-out.

If you’ve spent any time playing Disney’s Star Wars: Jedi Challenges, the Marvel Dimension of Heroes’ hardware components and the way the you have to set everything up will be familiar. Included with the AR headset itself, the kit provides you with a beacon that acts as the focal-point for game play, and two motion-sensing controllers that transform your hands into those of whichever Avengers you’ve decided to play as.

After downloading the companion application onto your iPhone or Android device, all one should have to do in theory is slide it into the headset with the accompanying safety-tray, strap it on, and begin playing, but in reality, the process is something of a hassle that immediately sets a less-than-great tone for the experience you’re about to subject yourself to.

Because little has seemingly changed about the underlying technology Lenovo’s offering, the process of setting the hardware up to play the game is as frustratingly-tedious as ever.

Even though the actual game itself lives within your phone, Lenovo’s headset has to be charged via USB if you have any hopes of using the thing, which has the potential of taking the wind out of the sales of people who rip open the packaging hoping to immediately dive into gameplay.

Each of the two controllers requires two double-a batteries (which are blessedly included), as does the beacon, which must be set up in a reasonably-open space for people to be able to move in. Nothing about the set-up process is especially complicated, but it’s difficult not to get the sense that you’re fiddling with dated technology that doesn’t feel “right” in 2019.

Because the game relies on using your phone, one would imagine that the headset would be configured in such a way that it would be compatible with as wide a variety of devices as possible, and yet when I tried inserting my iPhone XR into the headset, the thing simply wouldn’t fit.

Obviously, the XR wasn’t on the market when Lenovo first put the Mirage out in 2017. But given how the device quickly became Apple’s best-selling phone last year, it seems odd that the manufacturer would push the AR experience knowing that a sizable chunk of people’s devices straight-up wouldn’t work with it.

Ultimately, I ended up using an older iPhone X model that fit into the headset fine for the most part, but as I strapped the thing onto my face to begin calibrating the controllers and getting into gameplay, it became obvious that Marvel Dimension of Heroes is still a long ways away from being the kind of game that people are going to be clamoring for regardless of whatever phone you’ve got.

To be honest, the first and most important thing you have to do in order to get into the game is to make sure that you’ve got your phone slotted into the headset damn-near perfectly, otherwise the entire experience ends up effectively borked because you can’t see all of the necessary information that’s being provided on-screen.

When the phone needed up being even a little bit crooked, I ended up having to spend way too much time either looking down or looking up because the game couldn’t get a solid sense on where my body was in relation to the beacon, and while I could always take everything off, and adjust things to get them right, doing so was always a hassle.

Once you actually get into the game, and calibrate the two controllers, you meet a very snazzy-looking Doctor Strange who explains that he needs your help defeating a number of Marvel’s notable villains like Ronan the Accuser and Ultron. Regardless of hero you choose — Captain America, Black Panther, Captain Marvel, Star-Lord, Doctor Strange, or Thor — gameplay centres around you using both of your hands to perform a variety of unique attacks battle against
waves of enemies who zoom into your line of sight on the headset’s reflective display.

When the controllers are attuned precisely, simple actions like punching and swiping are easy enough to pull off and when you successfully strike a target, the glowing plastic sticks rumble with a feedback that’s pleasant, but doesn’t quite have an “oomph” that makes you feel like you’ve actually touched something. It’s when the controllers begin to get a little wonky that the game becomes an exercise in patience and contorting yourself to make the hardware work for you.

Beyond punching, each of the characters have a bevy of specialised attacks that you can launch by hitting a combination of buttons on the controllers and lifting your arms into various postures.

Again, those mechanics are pretty straightforward, but because the game has a tendency to forget where your hands are unless you’re constantly holding them up at the ready like a boxer, I repeatedly found that when I tried to unleash a wave of kinetic energy as the Black Panther or to fry a Kree soldier with Captain Marvel’s photon blasts, the game had no idea how to follow along with my movements. 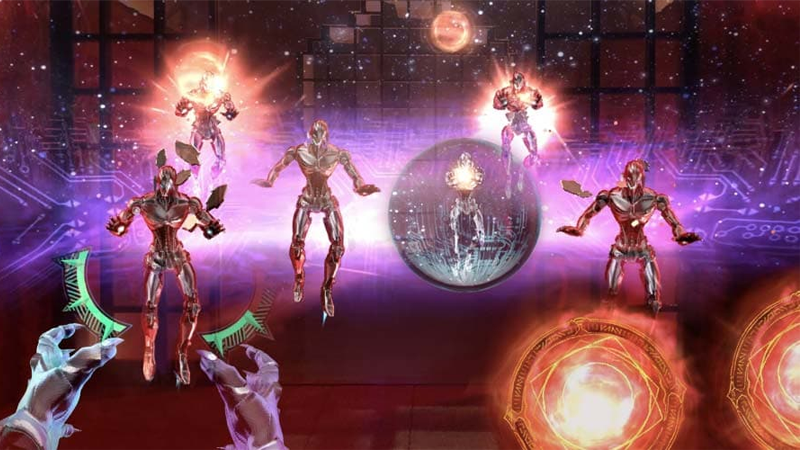 It wasn’t until I realised that the game thought that my arms were pointing straight down that I managed to begin zapping baddies regularly, but doing so meant holding my arms at weird, unnatural angles that made me look like a lunatic bobbing and weaving in my living room.

Should you stand with perfect posture with your hands at the ready, you’ve got about a 40/60 chance of Dimension of Heroes working the way it’s meant to. But because the game encourages you to lean and shift your weight around, it’s never too long before you’re looking down at your virtually augmented fists and seeing that they’re impossibly turned around, and unable to actually hit any of the aliens trying to attack you.

In those rare moments when the game worked mostly as it was meant to, you could see the see how, at one point in time, the Mirage might have been something to get excited about. Surprisingly, navigating the menu system with your entire head feels like the most advanced aspect of the game, because the selection process is as smooth as it is natural and it makes you with that the rest of the game was built around smaller motions that the hardware could actually keep with.

Most damning of all is that, for all of its “future tech” trappings, Dimension of Heroes’ actual story and gameplay are simple to the point of sometimes feeling basic which makes you wonder why, exactly, anyone would shell out so much money for it when there are other Avengers-themed video games with much more fleshed-out narratives and controls that lend themselves to actually having fun.

Lenovo wants strapping on the Mirage to feel like letting a wave of Wakandan nanotech envelop your head as you train up to become Earth’s next great hero, but both the hardware and the software simply aren’t there. They’re leftover products doing their best to keep up and capitalise on a buzzy-IP, and unfortunately, they just aren’t up to snuff.