The Mario Kart Tour mobile spin-off is now live for Android and iOS. I’ve had some time to check out how Nintendo’s upcoming free-to-play mobile game adapts the beloved kart racing series for smartphones. The answer is a mostly faithful but stripped-down recreation of Mario Kart decked out with all the microtransactions and lottery mechanics mobile games are infamous for.

Mario Kart Tour utilises all the same courses players have encountered in the main series. For example, the Toad Cup, the game’s tutorial circuit, consists of Choco Island 2 from the SNES game, Toad Circuit from the 3DS game, and Dino Dino Jungle from Double Dash on GameCube. Each track felt slightly shorter than its console counterpart, but otherwise very similar, down to the look, feel, and music.

You select a driver, a kart, and a glider from your inventory before getting matched up against seven other players from around the world. You steer by dragging your finger to the left or right of your character. The further you drag, the more your driver cuts the wheel.

If you remove your finger they just go straight. It’s also possible to drift by turning late and aggressively. Doing so and holding it for a few seconds will result in your driver getting a quick speed boost, just like in the rest of the games. 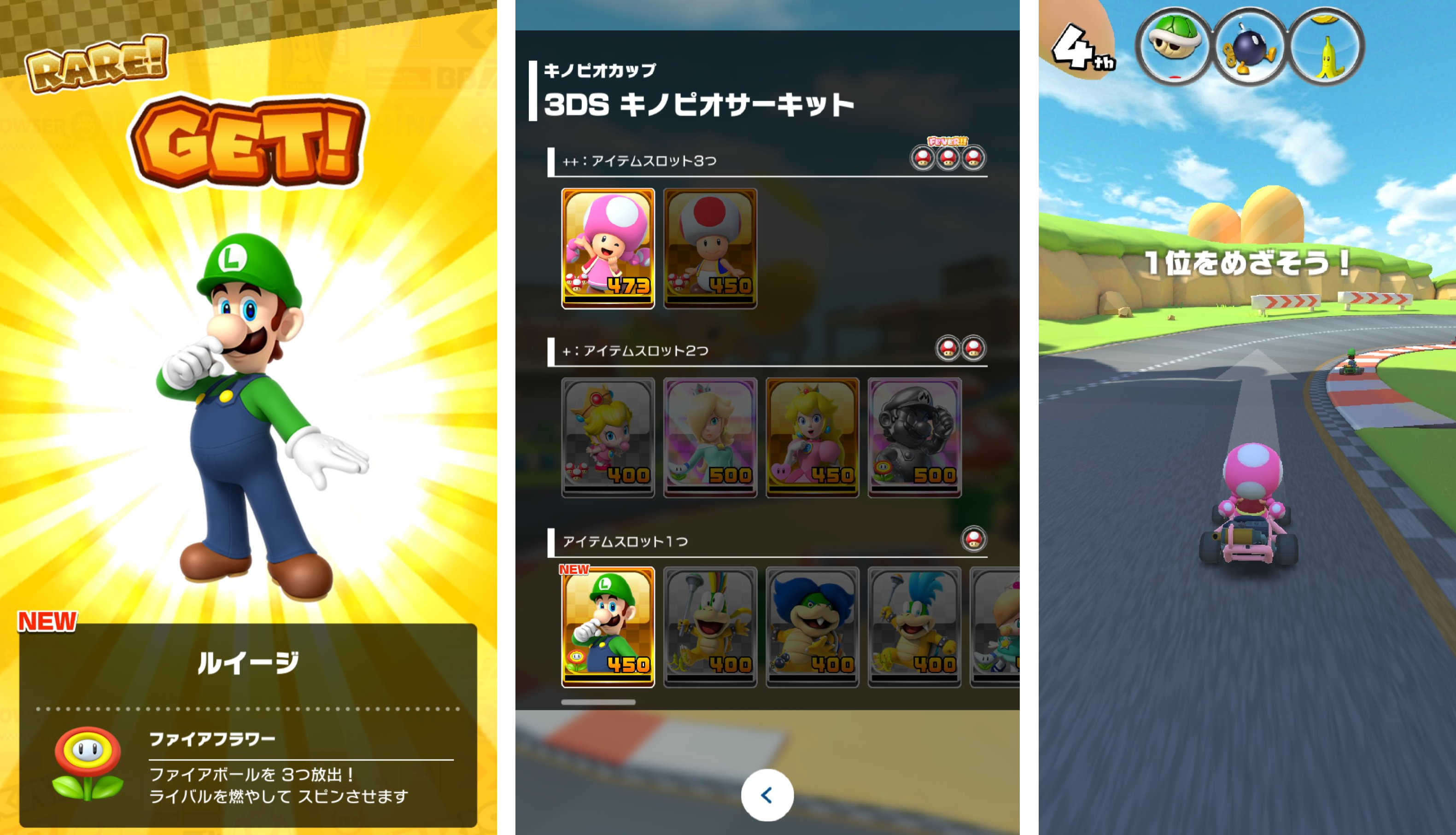 Item blocks are also present. Every time you smash through one you get an item you can use by touching a small area just below your driver. Items like stars trigger automatically, while shells need to be fired manually. If you don’t use all your items by the time you hit another item block each slot will automatically be repopulated with a new item. So far it’s mostly only been shells and banana peels, although I have gotten stars and have been hit by a fair number of blue shells.

To unlock additional circuits you collect Grand Stars by completing races and other challenges. Earning stars is also how you unlock gifts, some of which contain green gems, Mario Kart Tour’s premium currency. This is where things start to get weighed down with overlapping in-game currencies.

For five gems you get to “pull” on a green pipe that shoots out a new driver, kart, or glider, each of a different rarity. My first pull got me Morton, one of the Bowser minions. Currently the in-game shop, which doesn’t allow you to buy gems yet, is advertising Metal Mario.

Each driver, kart, and glider gets different bonuses depending on the stage its used on. For example, on Kalimari Desert, Morton gets three item slots instead of one, and his kart gives him a mushroom boost to start the race, and every time he smashes an item block on that course he gets three items instead of just one.

On 3DS Mario Circuit, however, he doesn’t have any bonuses. While some characters and items are clearly rarer than others, the actual advantage that rarity nets you on a given course varies. Characters like Metal Mario though have better bonuses on average across most courses.

At 50cc I haven’t run into much trouble. It’s possible that on harder courses I’ll feel more compelled to collect a driver with bonuses for it, but for now grinding to unlock new characters optional. At the same time, it’s easy to see how I might want to buy some extra gems if I’m struggling on later courses against other players with rarer drivers and better cars.

It’s hard to know how it will all shake out this early on, but Mario Kart Tour certainly has the ingredients for a potentially gruelling gacha-style grind.

More alarming is a stamina bar consisting of hearts. Every heart seems to last for about 15 minutes or so. If you run out you can’t play until you wait a bit or purchase more hearts with gems. I haven’t run into this problem yet, so I don’t have a good handle on how much it limits you, but it’s still a weird thing to see in a Mario Kart game.

Finally their are gold coins, which you can collect during races and also earn based on your performance. They’re used to buy stuff from a store whose stock seems like it will rotate every so often. While you can’t buy gold coins outright, you can buy gems, which can be spent to enter a coin rush mode where you drive around a track solo collecting as many coins as you can. For five gems every coin is worth double. For 25 gems every coin is worth 10.

As it stands Mario Kart Tour is fun to play in the moment but feels more about collecting and unlocking things than actual racing. I’ve only come in second once so far, and even then the game wouldn’t tell me by how much, even though I’m sure it was fractions of a second behind my opponent.

It mostly feels like you’re racing yourself, just with other people around, trying to get more stars, coins, and gems to unlock additional circuits. None of that is bad on its own, but sadly there’s no option to just race with other people on an even playing field for the fun of it.