Mario Kart Tour is a fine racing game. The graphics are lovely. The simple touch controls are fine once you get used to them. It’s overflowing with colourful Nintendo brand polish. Mario Kart Tour is also a free-to-play game with a microtransaction-fuelled gacha collection mechanic and game options and rewards locked behind a paid monthly subscription. If that second part doesn’t bother you, you might have a good time with Nintendo’s latest mobile game.

Two years later, after Dr. Mario World and now Mario Kart Tour, and that dissonance remains. Games we’ve spent years playing on Nintendo consoles feel weird on phones and tablets. Especially when a game like Mario Kart gets turned on its side.

In part, I mean that literally. What an odd choice, taking a game we’re used to playing in landscape mode and making it portrait. The narrow screen makes it more difficult to see competitors coming up alongside your racer. It’s not a great view on my iPad. It’s even worse on my skinnier iPhone. Having played the game for a couple of hours now, I still feel the urge to turn the whole thing around in my hands.

I’m used to holding down the accelerator button as I race through Mario Kart tracks. That’s not what happens in Mario Kart Tour. Karts move forward automatically. All I have to do is tap left or right to steer (there’s a gyroscope steering option but it’s rubbish). It takes a while to get a feel for how and when to start drifting, and different kart models have their own handling profiles, but after four or five races it’s not bad.

As alien as Mario Kart Tour can feel at first, it’s not really the gameplay or screen orientation that makes it feel like the awkward cousin of a proper Mario Kart game. It’s the structure. It’s collecting stars awarded for achieving high scores in races to unlock new circuits. It’s tracks where certain racers have distinct advantages over others. Musician Mario, one of the special racers available during the game’s New York City-themed opening event, has a special power that grants him two Bob-ombs instead of one when he collects that power-up. Looking at his racer page, we can see which courses grant him three items per power-up box. 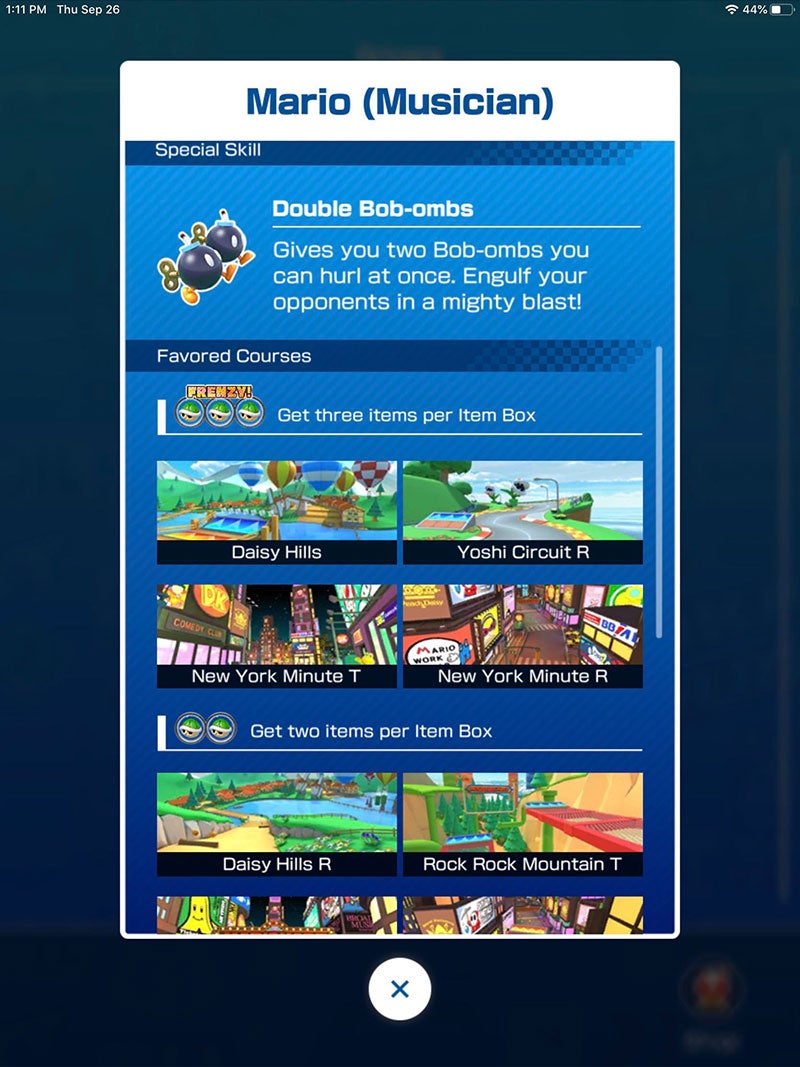 Certain racers having a distinct advantage over others in certain situations isn’t great. The game’s gacha feature, in which players can spend in-game currency for a chance to unlock rare racers, means that players who pay more have a better chance at having the right racer, kart, and glider combo to get maximum bonus points on any course they play. That’s verging on pay-to-win, even though there’s no real-time multiplayer in the game ” currently, players race against computer-controlled ghosts with real players’ names attached to them.

Mario Kart Tour isn’t quite as greedy as it was during beta. The test version of the game Ethan Gach played earlier this year had a stamina/energy metre, one of the most obnoxious free-to-play mechanics, as well as premium currency called green gems that offered players better rewards the more they purchased.

The launch version of the game lets you play all you want. The green gems are now rubies, and doesn’t seem to reward you for buying more of them. Instead, there’s a $7.99 monthly Gold Pass subscription that grants players better rewards for completing races (including extra rubies), exclusive vehicles and equipment, and access to more challenging 200cc races.

Is an optional monthly subscription better than earning rewards for buying currency? Not really. Especially when Mario Kart Tour launched just days after Apple Arcade, a subscription service with more than 70 high-quality, microtransaction-free games for the same $7.99 price. Apple Arcade is mobile gaming without all the bullshit. Mario Kart Tour is a Nintendo game with a big extra helping of bullshit.

According to app data website Apptopia, Mario Kart Tour shattered launch-day records yesterday, with more than 10.1 million installs across iOS and Android devices. The idea of a free Nintendo mobile game is an attractive prospect for many, many people. I wonder how long that will last.